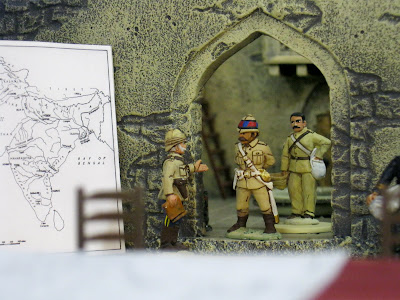 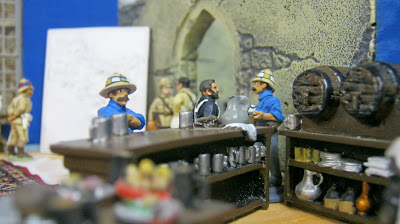 Several officers gather at the bar for drinks and a little conversation. 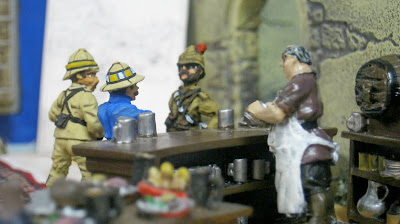 Bartender: "Did you hear the one about Lt. Byron from Glasgow?"
Lt. Bracegirdle, leftmost: "No. I can't say I have. Why?"
Bartender: "Well, he's a pukka (very good) laddy to use the lingo here an' wastes not a drop o' the Scotch. Yesterday a fly dropped in his glass. Frowning, he saved the delirious little bugger from drowning, placed him on the rim and demanded, Spit it out!" 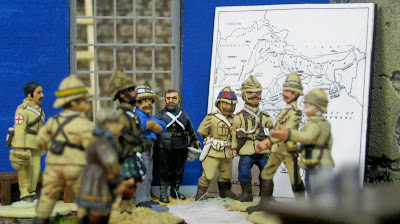 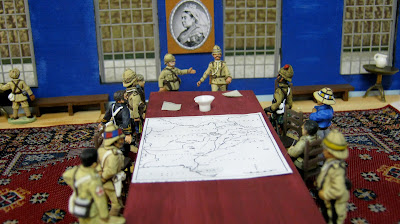 Trevelyan: "Gentlemen. May we have your attention?"

Pettygree: "Lawford, no please don't get up. Very good to see you. Your wounds from the Kota Ki-Bandahar incident?"

Lawford: "Glad to be back General. My injuries are healing well. I'll ride with the regiment when the campaign resumes if Dr. Watson allows."

Watson: "Count on it Sirs. He's healing marvelously from the torture." 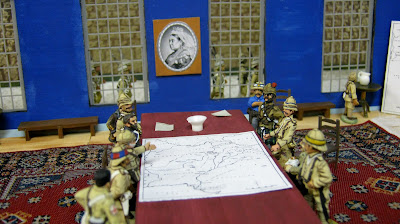 Pettygree: "Gentlemen. -- We shall return to the field to finish the job. Not only will we fight with rifle, lance and cannon, we've added the Gatling and cutlasses so to speak of Captain Jellicoe's seamen and one more ace too. Her Majesty's Government has agreed to negotiate extensively with friendly and enemy native leaders alike with promises and incentives." Major Faraday will explain.-- Major? 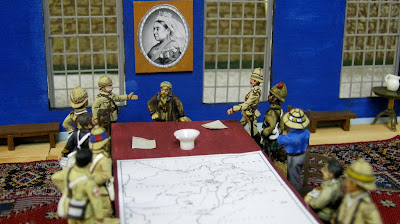 Faraday: "I'm glad to be here Gentlemen  to help finish this Muljadhi chap and his Tug followers once and for all. In addition to your arsenal of weapons and skills I am authorized to make treaties with the khans. To encourage them, I will subsidize friendly leaders with rupees and rifles." 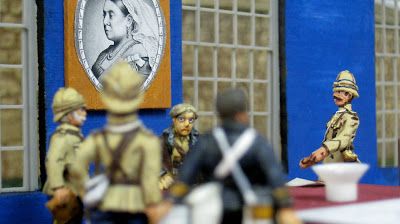 Faraday: "Yes. You see as the Army marches deeper and deeper into enemy territory, the khans who agree to remain peaceful will need weapons to defend themselves from neighboring leaders who will not be so agreeable. Plus, if we sweeten the deal with continuing subsidies of rupees,  it makes things better for us. Protects our line of communication."

Pettygree: "Quite so. Thank you.  Gentlemen, let us adjourn and enjoy the rest of the evening." 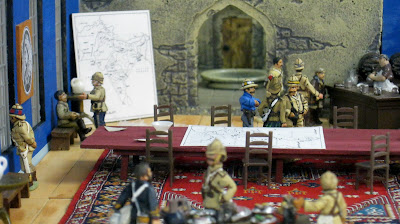 The meeting ends and they disperse. 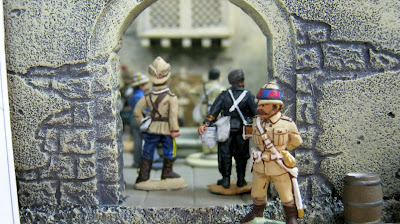 When the hour grows late, they retire to their quarters. 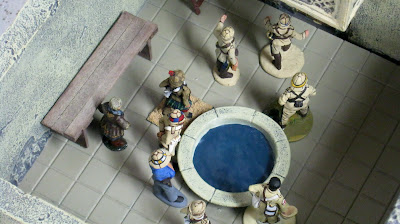 Good night Sirs. We'll see you in the new year, God willing.
--------------------
CLOSING REMARKS:
1. Lawford and Faraday are from Foundry's WWI British interrogation set painted by John Preece.
2. Bar, bartender, small table and stone structures are from Miniature Building Authority. The main table was scratch-built.
3. Winter ground cover in this and the previous chapter is on loan from the collection of Der Alte Fritz manufactured from The Terrain Guy in Texas.
4. May I encourage you to place your remarks at the word comments below?
--------------------
Posted by Gallia at 11:49 PM

Wonderfully atmospheric sets Bill, you're the Cecil B deMille of wargaming. Have you ever considered a career as a movie director?

My parents, both WWII veterans, used the word "pukka" regularly, along with a number of other Hindi/Urdu words like "chit".

Lovely little setup there. Spot on scenery and photos!

you are giving the Northern Khans Rifles?? Even if they do not use them on us (which they will) St Petersburg will be outraged and regard it as a direct provocation.

Who is this Faraday? some modern breed of politico I'll be bound.

Wonderful stuff, one can get quite involved.

Marvellous.
Somehow I even prefer these scenes to the battlefield perils!
I love the bar and accessories, especially the map and portrait of HM.

Because I kept looking at this large well-lit room with an excellent bar and a huge table . . . and I kept thinking that it would make a very "pukka" game room.

Really, that's what I kept looking at and thinking about.

Bill, this blog is quite simply magical. Your interior scenes are tremendous. I can't believe the networks haven't given you your own home improvement show yet.

Sirs!,
---
A hearty thank you for all your remarks and interest in the story, sets, characters and photographs. I am sincerely gratified to know you enjoy the finished product.
--
Respectfully,
Bill

Once again, beautiful work. You sir, have set the standard for a wargaming blog!

Is Senior LT. Jellicoe THE Jellicoe? If so, then KHAN and the Guru are in for some real trouble! However, he needs a bit of a promotion; John Jellicoe was promoted captain in 1897. Sorry to be all nitpicky!

It is Sir John. Oh, the Tugs are in for some trouble!

The soldiers marching by in the background through the windows during the meeting was simply sensational. That small detail that most people would not even think to add is what makes your photos so great.

You've been nominated for a style award!!

Hello Steve,
Thank you for the honor of your recognition. It is very nice to be appreciated.
Respectfully,
BIll

Thank you for a few hours of enjoyable reading. You have renewed my interest in colonial wargaming.