CAMP OF THE BERKSHIRES  AND  GHQ
THE SURAJISTAN FIELD FORCE 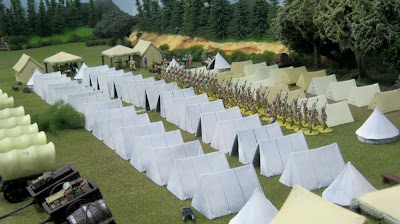 24 June 1900:
The Surajistan Field Force is four days behind Captain Bartlett's Sketching Patrol (Advance Guard) up north. Above is the camp belonging to the Berkshires, 66th Foot. The rest of the Army is encamped closely nearby. No one has heard from Bartlett yet. 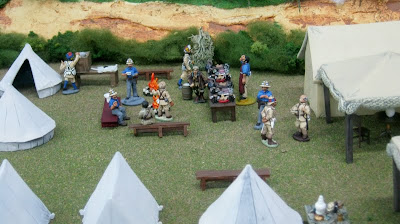 All was routine and quiet when.... 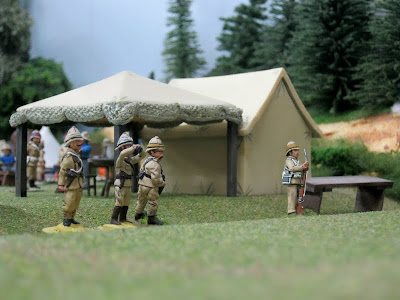 Captain Nightingale (center): "Gallopers com'n in ... an' fast.
Lt. Bracegirdle (right): "Must be news from Bartlett." 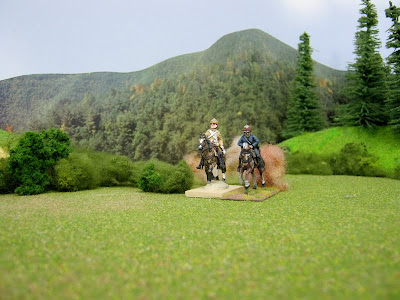 Nightingale: "Its the Belgian supernumerary volunteer Cap'n Verbeek with a trooper from the 10th Hussars. Raising a lot of dust." 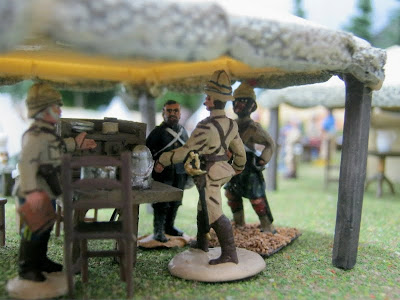 Verbeek: Moi Général, J'ai l'honneur, ah, excuse me...to report that five days ago ... on the 19th ... we arrived at the Amla River and as ordered established the...." 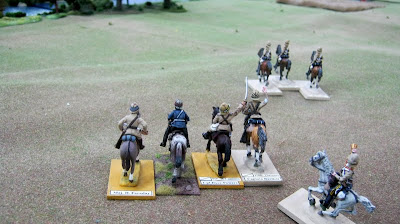 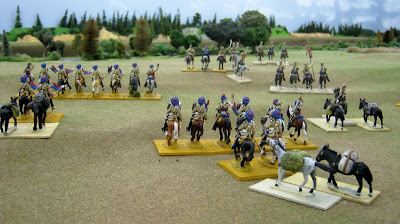 Broken country has finally given way to more open and somewhat flat ground. A camp will be established somewhere on the plain. 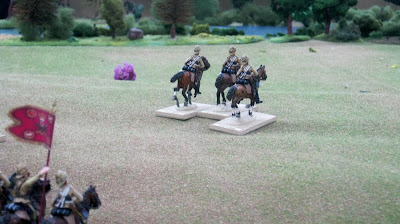 ﻿Scouts ride ahead to reconnoiter in case an enemy is hiding along the riverbank. 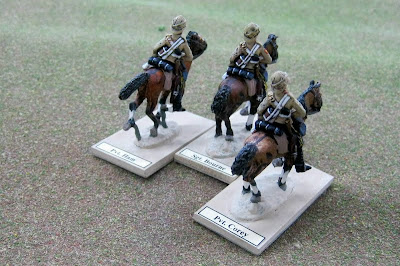 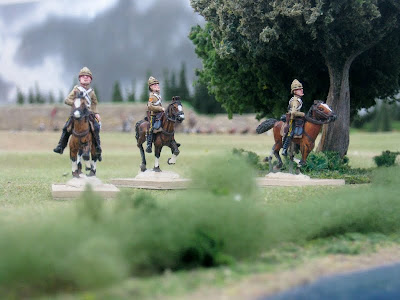 Trooper Corey: "Nuth'n as usual."
Trooper Ham: "We ain't done yet, Trooper Corey."
Sergeant Bourne: "Turn to your right. I think a ford is yonder by some buildings." 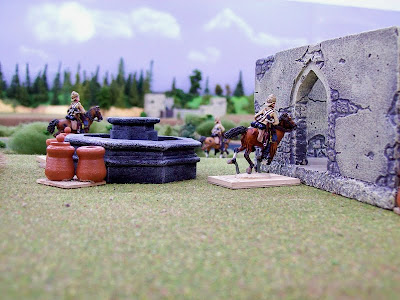 The trio trotted to the buildings finding them abandoned. 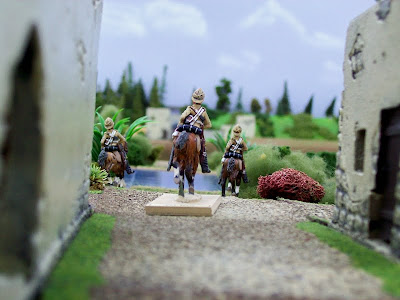 Trooper Corey: "Sergeant! A ford is just below us."
Trooper Ham: "And buildings across the river might conceal them Tugs."
Sergeant Borne: "Aye. Time to report back to Cap'n Bartlett." 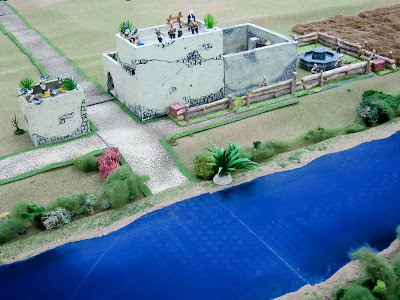 19-22 June 1900:
From the 19th to the 22nd instant, Captain Bartlett's command settled into two buildings above the ford. Construction of breastworks commenced utilizing trees from wooded areas nearby. 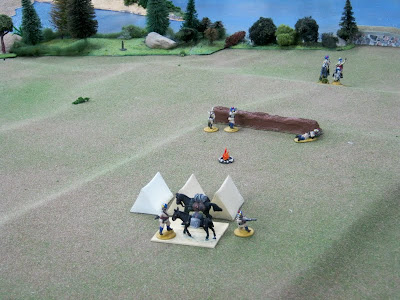 A troop of 9th Bengal Lancers encamped to the east overlooking the Amla River. 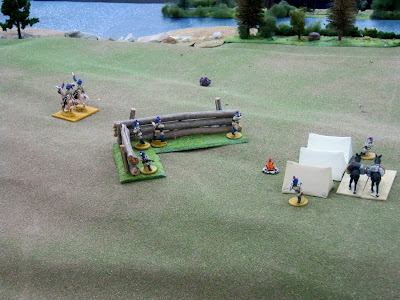 As did another troop about one mile to the west. 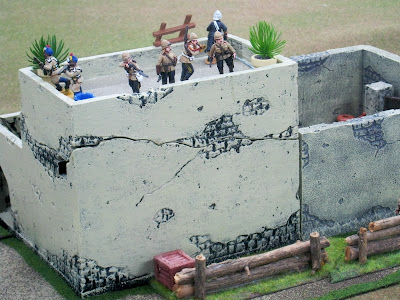 22 June 1900:
Most of the officers posted themselves on the second story roof looking outwards for trouble when.... 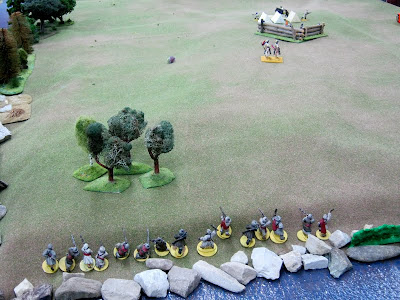 A body of Red Sash riflemen splashed across the Amla in the west taking cover behind the slope of the riverbank. Their fire was erratic but it did cause two lancers riding toward the river to hastily ride back to their camp. 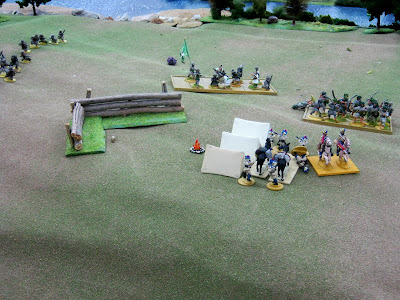 Green Sash swordsmen and riflemen surged from the woods at the top of the photo whilst the Red Sash Riflemen came on in support. 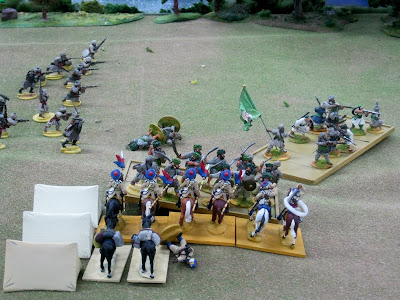 The lancers mounted up but could not get away. They were forced to fight hand to hand without any momentum. 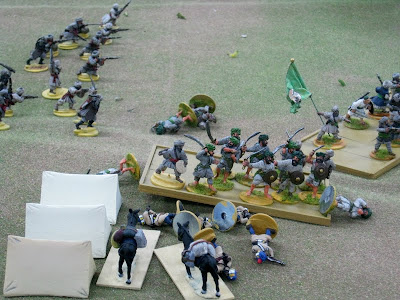 The Green Sash swordsmen cut down the lancers. Only a few escaped. Then the victorious Tugs immediately headed for the buildings and.... 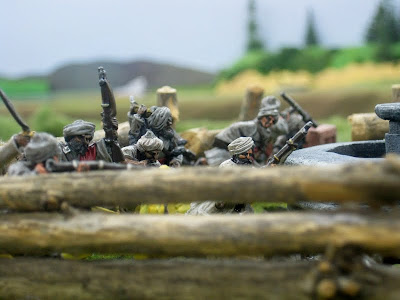 A great many crossed the breastworks to.... 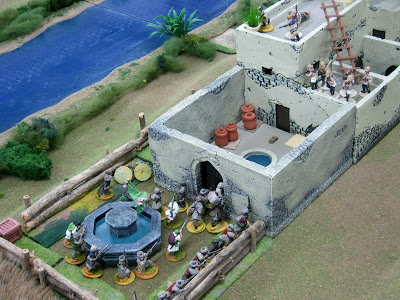 Batter down the door. Realizing he could not hold the outer perimeter, Bartlett had withdrawn all personnel into the main building in the nick of time! The enemy immediately set to battering in the door. Slowly it began to break. Its destruction was certain. Splinters and bullets flew as crazed combatants hammered away with intensity. 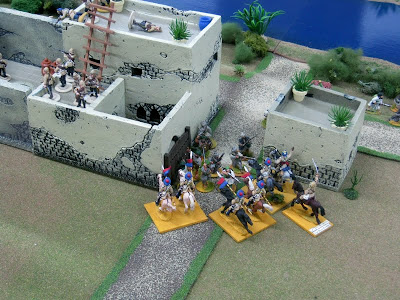 Other audacious Tugs attempted to break into the eastern door of the main building. Lancers from the eastern piquet camp temporarily discomforted them but.... 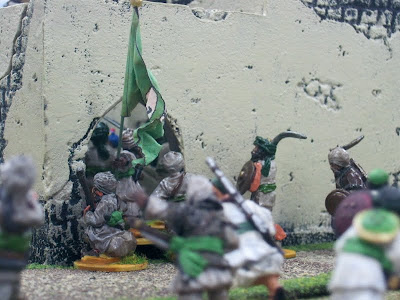 The foe broke down the door, hurled defenders backwards and surged within!

Bartlett's easwtern door is breached; the enemy is within.
His western barrier is about to be shattered.
The mounted lancer troop outside disappeared due to withering fire.
What is Bartlett's fate?
What news has the galloper Verbeek brought to General Pettygree? 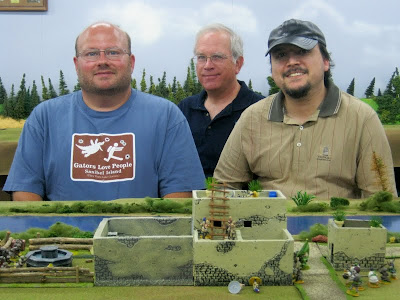 1. Todd B. (left) and Chuck L. (right) commanded the natives whilst Bill P., yours truly (center), nervously took the role of Captain Bartlett and the outlying piquets.

2. Tune in next time to find out what happened!

3. What will General Pettygree do when HE finds out?

How well done is that? I can only think of the time that went into doing all this. Hats off to you all.

What an absolute marvel, fantastic models terrain and narrative. A joy to read, thank you.

fantastic photos as usual! That first picture of the main camp is just awesome, certainly looks like the camp of a sizable force.

Gripping stuff! Desperate work with fire and sword along the river! I'm looking forward to more.

BTW, I found a covered wagon/ pencil sharpener of the type you pictured here previously and I snapped it up. Thanks for the idea.

I feel some trepidation about what comes next, which is the mark of skilful storytelling.

This is about as good as it gets sirs.
Hats off to you.
I look forward with antissipation and a sense of foreboding to the outcome of the siege, hopefully Brit pluck will prevail...

Thank you everyone!,
for your remarks and interest in the story and scenes. I appreciate your willingness to comment very much.
Respectfully,
Bill

It's our privilege to have the story to comment on!

Things do look desperate along the river, though one does wonder if spreading out his troops was such a good idea . . .