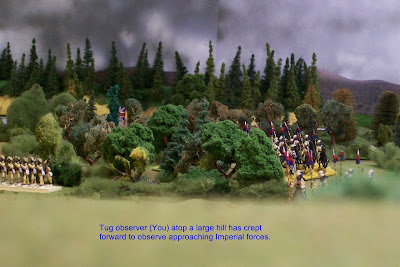 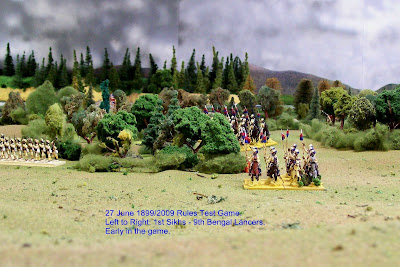 Colonel Smythe's Imperial Recon Force emerges from wooded areas. Out of sight are more Imperials crossing at a ford. The Tugs are nowhere in sight. The scenario called for the Tugs being unable to be within 36" of any Imperial miniature on Turn 1. Indeed, by an unlucky die throw, there were no Tugs on the table anywhere on Turn 1. The camera is positioned atop a large hill looking downwards at a 30 degree angle. Click on photos to enlarge them. 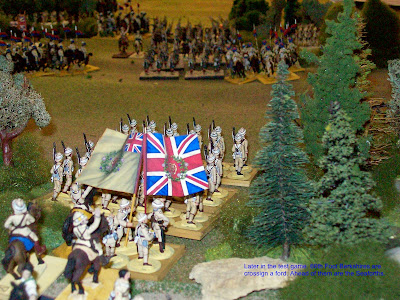 This was a first test converting Batailles de l'Ancien Regime (BAR) to our Colonial large multi-player games. We can use a separate system for much smaller or solo games; used exclusively since this blog started.

1. Conduct a reconnaissance in force.
{a} Cross the river
{b} March to the top of the large hill and establish a base camp
{c} Send scouts to the end of the table to the right and back. Report. See map.
{d} Or defeat foe, should he appear.
{e} Send a courier to Fort Grant explaining circumstances. (Off map far to left)
{f} Guard supply carts, animals, etc.
{g} If in peril, you may retreat back across the ford to save your command.
Automatic defeat.

1D6 = 1, 2, 3 = Put Unit Card At Very Bottom Of Deck
CinC and Umpire (Bill) may rethrow one undesirable result each.
When Five Units Are In The Recon Force, STOP!

Caveats:
Supply animals, porters and/or carts:
Artillery at 1 per cannon plus the usual one transport mule per cannon.
Bombay M&S, and 10th Hussars at 2 each.
All Others at 3 each

3. Deployment:
One unit may be across the river to the right within 15” of the ford.
A portion of one unit may be marching in/crossing the ford as far as the right
bank. All other units must be to the left of the river deployed in any fashion.

On Turn 1, you are confident no enemy is within 36” of any of your units.
Beware of possible foes coming from any side table and from any direction.
Foes may be hidden or out of your line of sight.

There is a small tributary above the ford. The left half is unfordable. The right half is fordable.

Tug units arrived by 1D6 throws from Turn 2 to Turn 7 no closer than 36", 48" or 60" to any Imperial miniature.
----------
Imperials: 296 + 4 Guns
Tugs: 476 +2 Cannons
----------
The Imperials had a tough day due to scenario conditions. They could not bring their weapons fire sufficiently to bear when the Tugs were few in number. Players commented the game was fun. After game chat regarding suggestions for rules enhancements was beneficial. Part of the process.
----------
Our Traditions:
The host provides chow. On this occasion it was pizza.
Participants bring snacks or a small quantity of beverage to share throughout the game.
----------
What's Next? A photo shoot of the 66th and the Seaforths marching into Fort Grant to resume the campaign. This should occur in July. I need to paint some Jumbos by then so....till then, thank you for looking in.
----------
Posted by Gallia at 12:05 AM 2 comments: