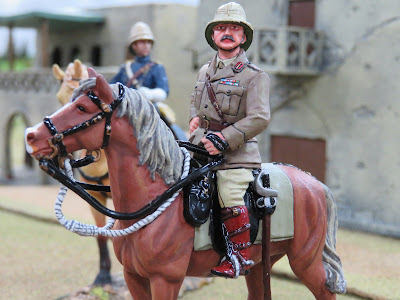 Today's story is about traditions; commonalities that hold diverse people together to accomplish goals. Good afternoon ladies and gentlemen. My name is General Pettygree. Ride along with me, will you, as we explore traditions of The Annual BIG Colonial War Game. 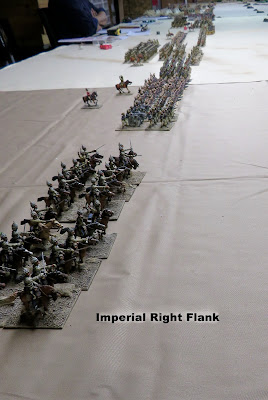 On the 6' x 28' Imperial Back Table, the emptiness of the open desert inevitably forces nervous thoughts of being in the middle of nowhere. Only your mates and the Martini Henry on your shoulder offer consolation. Off image to the right is the Dervish Main Table and beyond that, their Back Table both of the same dimensions. 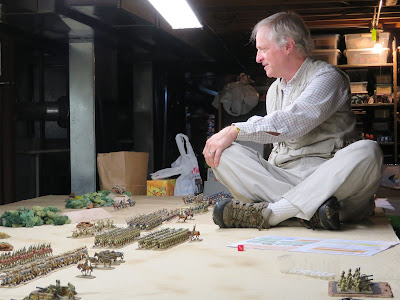 From time to time table height necessitated that both Jim and Bill ascend to the desert surface to move units. It has to do with biology; where the body can bend. Six foot and taller gamers have little trouble bending and reaching inward to march units along. Not so for everyone. Here Jim advances the Right Flank toward the Main Table where the Dervishes were waiting for him. 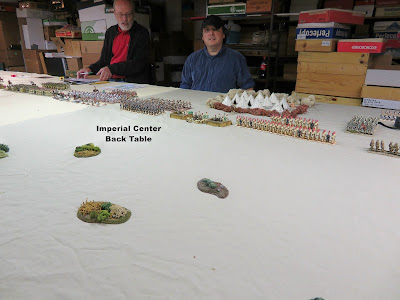 Earl (left) and Chuck (right) are about to step off beginning Turn 1. 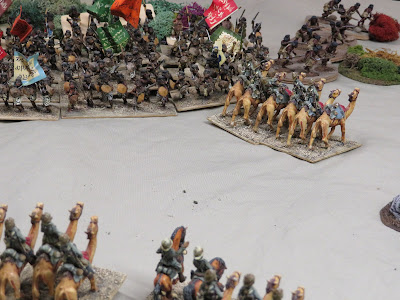 Farther away on The Imperial Left Flank, Peter Gilder's own Camel Corps scouting ahead immediately tripped a shocking Dervish ambush. 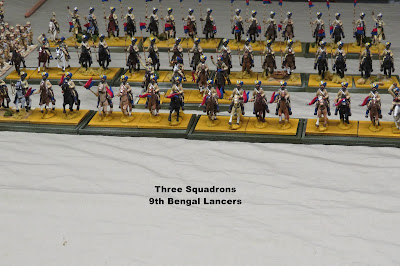 Three squadrons of Bill's 9th Bengal Lancers formed to face the Hadendowah threat. Nearby British infantry began to form a wall upon which they hoped the Dervish tide would eventually falter. Surely the Camel Corps was doomed. 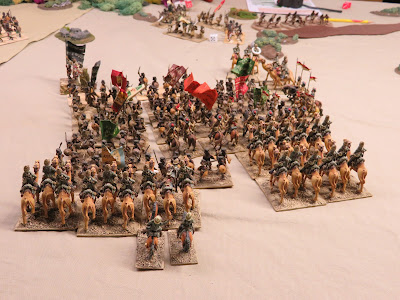 On the Hadendowah rushed flushed with success. The rest of the Camel Corps and a squadron of Gilder's Lancers madly countered with a few against the many. It worked. Surviving Dervish withdrew for three turns leaving the Camel Corps greatly withered. Bill was joyously amazed about this miracle never minding the improper use of the Camel Corps. What else could he have done? 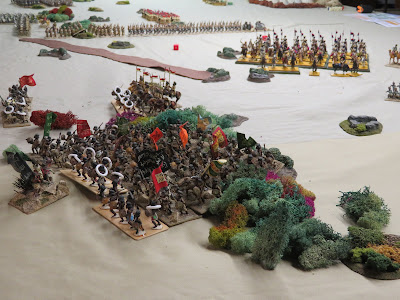 The Hadendowah continue their forced withdrawal
whilst Bill's cavalry follows nudging them along. 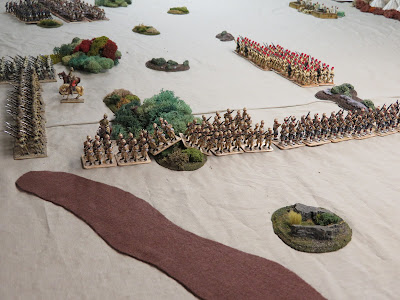 Here is the wall of infantry formed to meet the expected enemy onrush that did not happen.

The medium brown feature is a gully. Several of these appeared randomly. Each might or might not contain a Dervish ambush.

The Imperial Back Table edge is inches to the left. Beyond it was a gap for us to walk and then the Dervish Main Table. In reality the latter was mere inches from the left-most British battalion. Without the gap, everyone would have had to climb onto the tables! 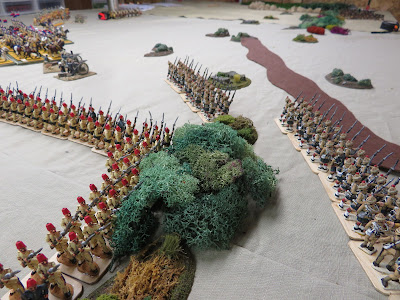 Turn 7: Turning about we are looking from the Left Flank outwards. Bill's Imperials are advancing cautiously in preparation to cross to The Main Table off image to the right. The Hadendowah shock was still fresh in his mind. Remnants of the foe are in the upper right hand corner. 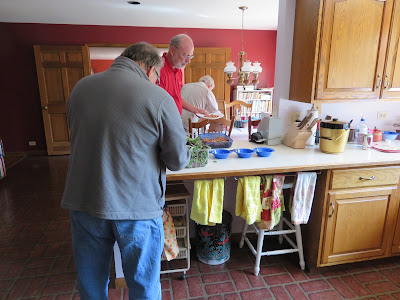 Chow Time at Keith and Donna's is a cherished tradition. Bob M. (near), Earl (center) and Jim (distant) are serving themselves salad, vegetables, a casserole, dinner rolls, muffins, beverages and more. Near an hour of companionable conversation ensued while the game paused. 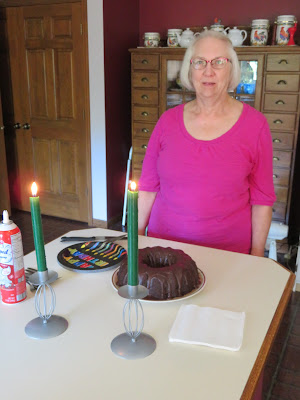 Later in the afternoon Donna served a scrumptious and moist chocolate birthday cake for celebrants, Keith, Curt and Chuck. On game days we remember our birthdays with cake; a nice tradition. 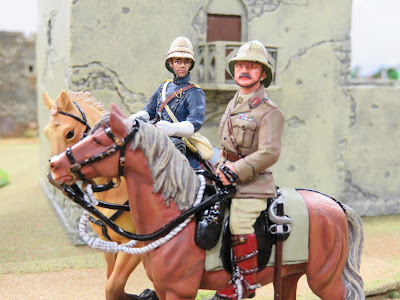 Subsequent game turns found the Dervishes falling back and back as the Imperials pushed onto The Main Table. Imperial firepower was overwhelming. (Several rules misinterpretations.) The Mahdist Reaction Table kindly made them withdraw to fight another day. 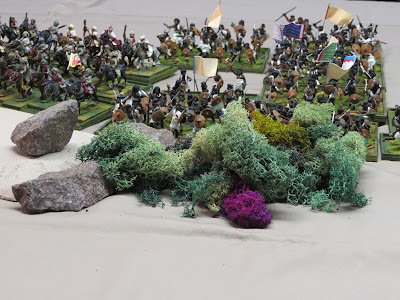 Another tradition: Players are encouraged to bring their own units to games. Chuck, Earl and Bill brought units for the game reinforcing Keith's lovely Peter Gilder collection. Plus, if you don't look too closely, Northwest Frontier Pathan horsemen are bolstering Dervish forces. Why not? 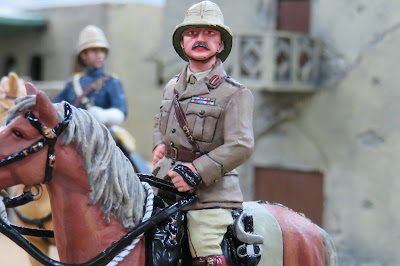 Good luck lads making your own traditions.
Your friends will look forward to it, I assure you.

1}Traditions:
Repeated annual games are appealing.
Make it a BIG game and a long BIG day.
Players contribute forces and terrain for the game.

2} Peter's original hand-written rules were put into a Quick Reference format more than a decade ago. We are in our fifth version adhering as closely as possible to the concepts Peter used at The Wargame Holiday Center. For this game, movement rates were increased by 66% and weapon ranges by +50%. It is likely some changes are needed for this very  large scale of game but not for the more customary ones.

3} The Imperials had twenty-ish sixty figure battalions; more than 1,300 miniatures. Dervish numbers exceeded this. Peter's entire collection is owned by Keith. We love seeing it on the table.

4} Carlo Pagano's modern version of the rules from 2014 are available here:
http://withpyjamasthroughthedessert.blogspot.com/2014/11/now-on-sale-sands-of-sudan.html

5} Bill was very busy commanding the Imperial Left Flank. Hence he did not take as many photographs as usual. We ask for your kind forbearance.

8} Underlying movement trays were built for the 9th Bengal Lancers for this game. Reason: To reduce the number of things to move. It's a time saver.

9} Why not start traditions similar to this for your friends and you today? Don't stop there. Widen your net to include others of a companionable sort to enjoy fun and camaraderie.

10} Don't be a malingerer! Get a game going, move units and throw some dice.

11} Go to the blog of Der Alte Fritz for more photos and the story from a different perspective.

12} We would enjoy your remarks at "Comments" below.