In previous Chapter 19: Two Days From Bebara, the advance of the Imperial Army was recounted. Its mission: to recapture the village of Bebara and thereafter defeat and/or push the inscrutable foe back into Surajistan. The following recounts the earlier loss of Bebara - the reason for the march of the Army. The story begins with fugitives from Bebara. Photos will fill your screens by clicking on them. And now.... 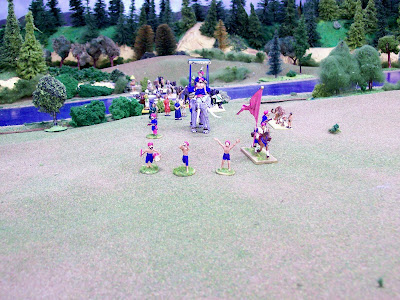 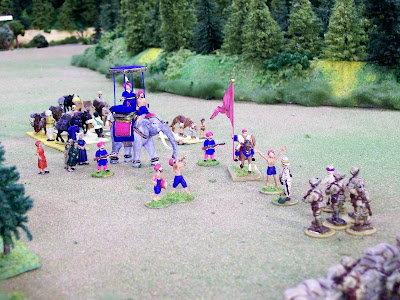 Lieutenant Bracegirdle inquired about the visit. The Rajah revealed his sad story.... 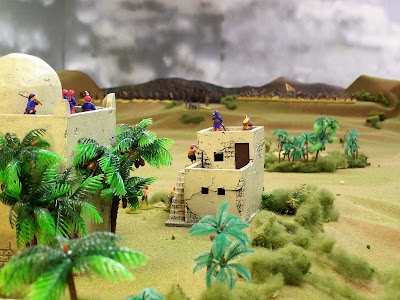 "During the month you name August, I was called to the top of my palace because...." 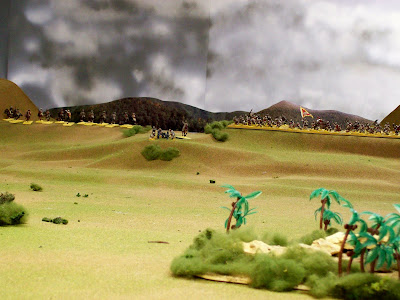 "An unexpected host appeared in the distance." 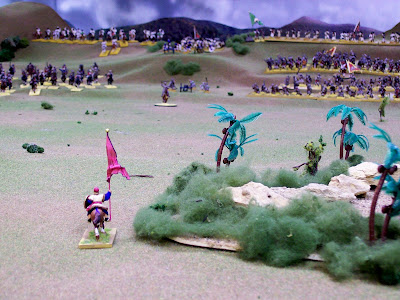 "I sent my trusted standard bearer to make inquiries even as the host continued coming forward in great, greater and even greater numbers toward Bebara." 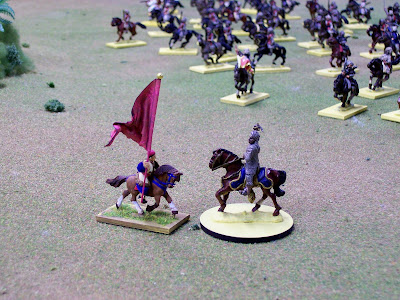 "My officer asked, The Rajah of Bebara humbly inquires how his poor village might be of service."

"KHAN only said, Your Rajah will depart Bebara within two hours taking his family, palace staff, you, supplies and a few guards. Resistance is impossible -- as you can see."

"Words of protest were futile because...." 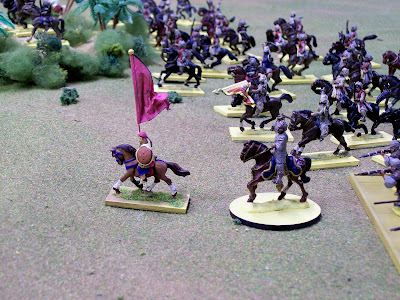 "KHAN'S host never ceased its forward movement. My officer departed to return to me." 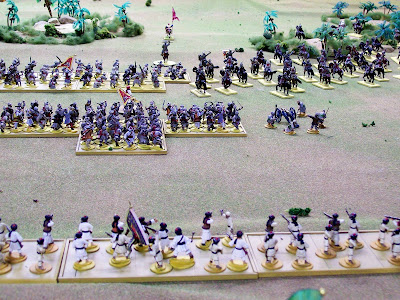 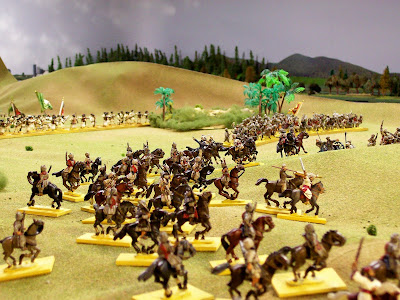 "In even greater numbers they flooded the plain. My meagre guards, half armed with ancient matchlocks, swords and only a few rifles could not resist." 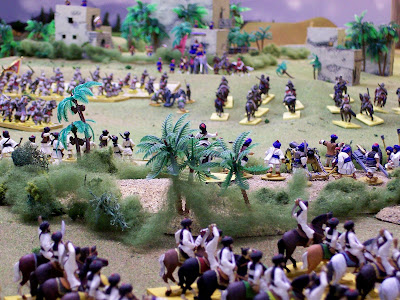 "And so I mounted my elephant to meet KHAN saying...." 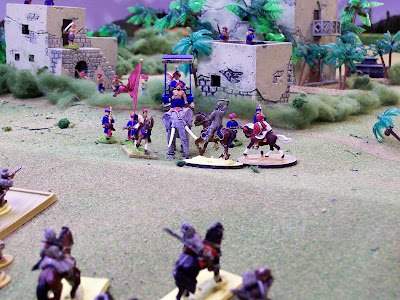 "By what authority do you desire me to abandon my village to you." 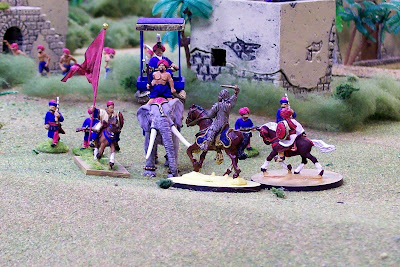 KHAN: "By the authority you see and by command of our Supreme Leader Muljadhe. You now have only one hour to depart as explained before and save your village." 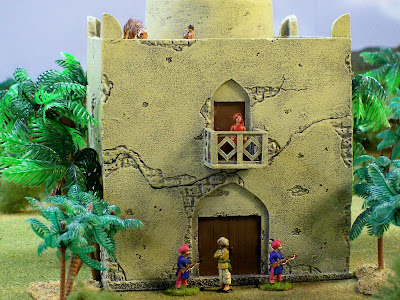 "My wife and chief counselor awaited my return." 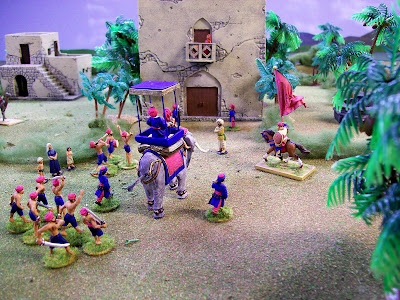 "My few swordsmen and some villagers attended me. Within the hour we departed Bebara."
----------

1. The next chapter (#21) will restore contemporary story time.

2. Return to see the Imperial Army closing on Bebara

3. Muljadhi, himself, may also appear.

4. Natives in grey and civilians fleeing to Outpost #3 were professionally painted by Reinforcements By Post.

Date: 12 September 1899/2009
Location: Two Days March From Bebara.
Situation: The Area Around The Camp Has Just Been Reconnoitered
If YOU Please: Enlarge Images By Clicking On Them.
And now.... 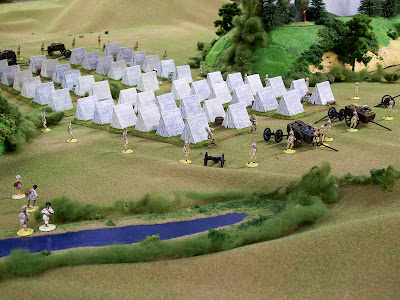 The Imperial Camp. This section is for the Royal Artillery, Berkshires and Seaforths. The Bombay Miners and Sappers and baggage are to the left. The cavalry brigade camp is behind the ridge to the right. 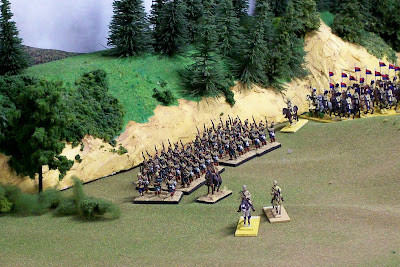 General Pettygree (foreground), "We'll be back soon Mitchell." Behind them is Colonel Archibald Sinclair and his Seaforth Highlanders followed by the 9th Bengal Lancers. They found no sign of the enemy nearby. 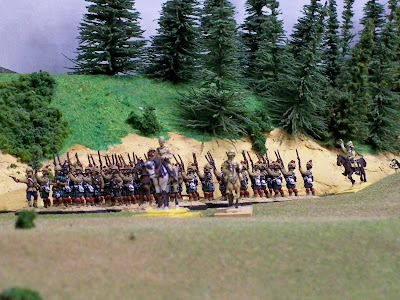 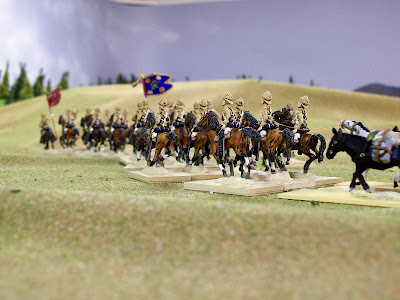 Meanwhile not far away Colonel Preece leads two squadrons of the 10th Hussars back to camp as well. 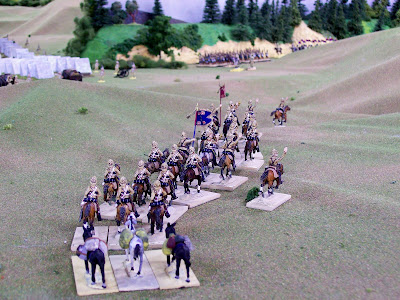 They see the camp now. In the distance are the Seaforths and 9th Bengal Lancers. 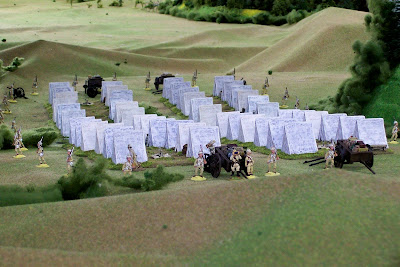 "They are all com'n in Sir an' no trouble found them."
To be sure dear viewer. However, only two days march from here is the village of Bebara held and fortified by the inscrutable KHAN. He means to offer battle soon and General Pettygree plans to oblige. Return soon to discover what will happen.
----------
Closing Remarks:
1. YOU can do this too.
2. Tents kindly on loan from the collection of Der Alte Fritz.
3. Tents were artfully composed and scenicked by HG Walls, Herb Gundt.
4. Seaforths are also on loan from Der Alte Fritz.
5. Notice anything unusual Gentlemen?
----------
Comments welcome plus your answer to Item #5 immediately below.
Posted by Gallia at 12:03 AM 14 comments: