Read chapters sequentially. 1-5 and afterwards 6. Click on photographs to enlarge them.

General Pettygree's relief column continues its march from Fort Grant to Tranjapour. The most forward unit is 1st Troop 1/9th. Bengal Lancers acting as a screen. They are followed in turn by 2nd. Troop 1/9th Bengal Lancers, two troops of 2/9th Bengal Lancers, three companies of the 1st. Sikh Infantry Battalion, 1/1 Mountain Battery and the supply element. The vedette has entered the area of forest you see below.
---------- 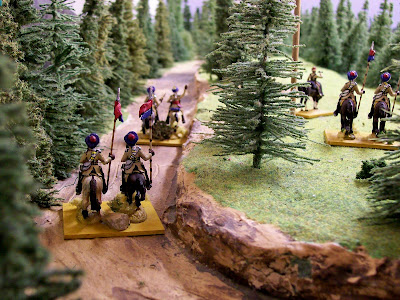 #79 The Telegraph Line
17 September 1898/2008. The next day 1st. Troop 1/9th Bengal Lancers scouts the road to Tranjapour. They follow the telegraph line from Fort Grant. The rest of the squadron is just to the rear (not shown) followed by "The Relief Column" commanded by General Pettygree.
---------- 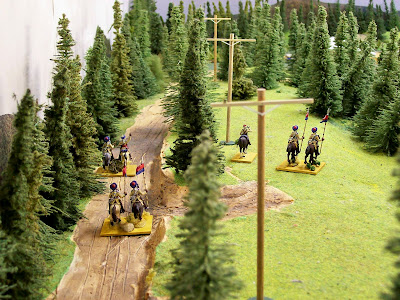 #80 The Telegraph Line
17 September 1898/2008. The vedette screen continues forward along the road and telegraph line. Fortunately this morning's telegraph from Tranjapour revealed the Tugs had not arrived there yet placing them even farther from us here. Tranjapour is still a day's march away from where we are. Therefore, no trouble is expected by the 9th Bengal Lancers. All is quiet --- and all is well.
---------- 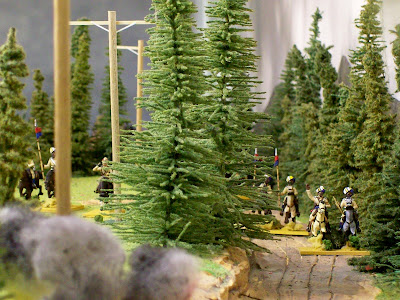 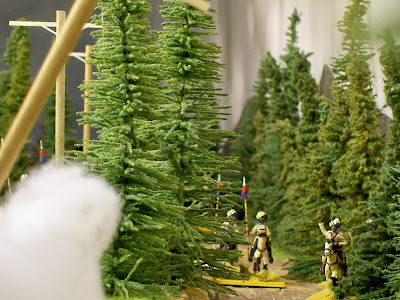 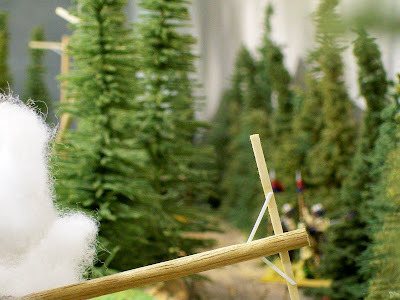 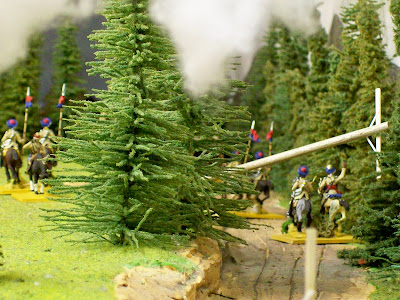 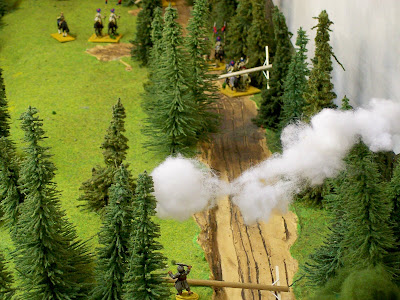 #85 The Telegraph Line
17 September 1898/2008. Smoke from the explosion rises and dissipates as the lancers ride back to friends whilst an unseen and cunning foe cheers.
---------- 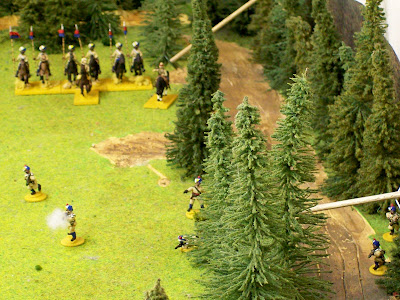 #86 The Telegraph Line
17 September 1898/2008. Later first troop dismounted, formed a skirmish line and moved forward. One lancer fired his carbine at movement in the forest. Was it the foe? Second troop remains mounted to the rear in support. Just beyond the far trees are the 2/9th Bengal Lancers and "The Relief Column" pounding up the road.
---------- 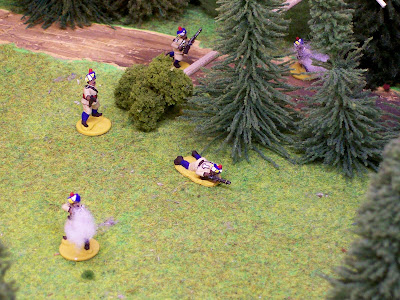 #87 The Telegraph Line
17 Sept. 1898/2008. Dismounted lancers continue their work but the foe has cut communication to Tranjapour and "The Relief Column" has slowed to clear the way there. Will General Pettygree arrive at Tranjapour in time? Will the defenders hold out? ---------- Dismounted soldiers are Old Glory 25mms. Mounted lancers are Peter Gilder 28mm Connoisseur Miniatures, officer with binoculars is 25mm Hinchliffe and telegraph poles are Berkshire Valley O Gauge model railroad telephone poles.
----------
Posted by Gallia at 4:30 PM 10 comments: