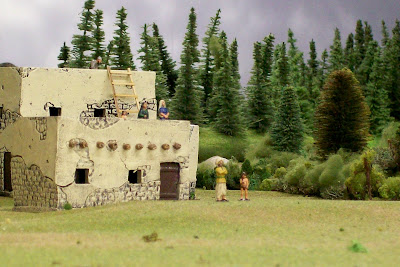 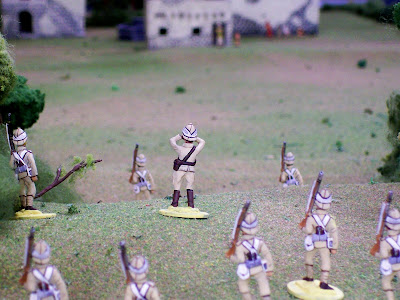 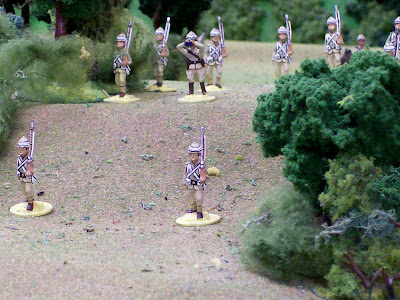 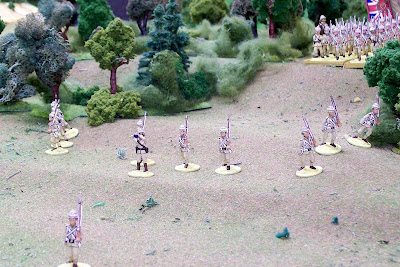 As the Main Body of the 66th Foot, Berkshires, descends the rise. 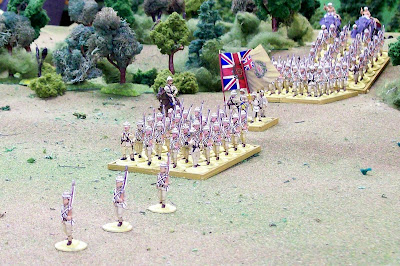 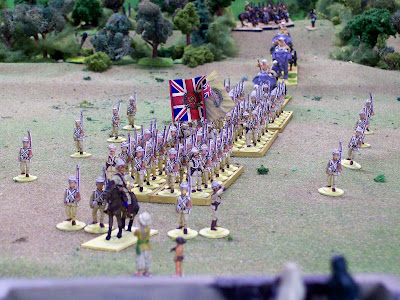 Colonel Blackeney stops to converse with the Indian chieftain. 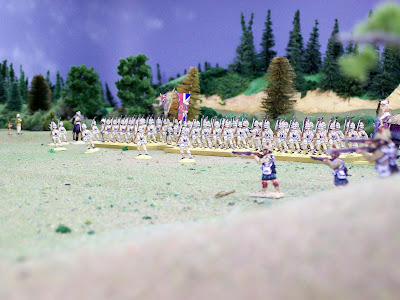 The Berkshires press on as a Highland screen appears. 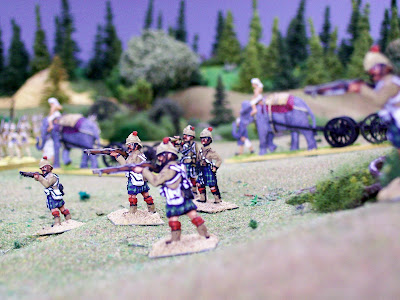 Protecting the left flank of the column. 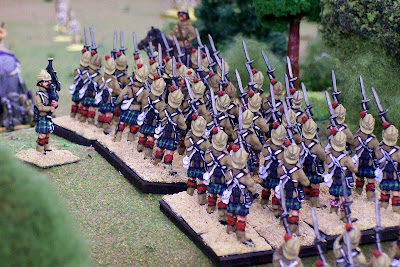 The Seaforth Highlanders top the rise heading for Kotar. This elegant unit is on loan from the celebrated collection of Der Alte Fritz. 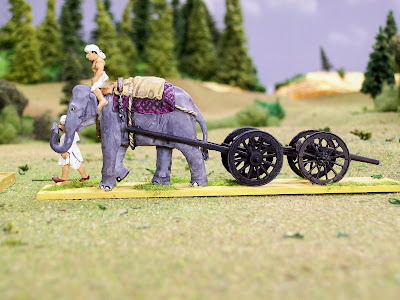 One of the Jumbos hauling an Imperial 12 pounder. Nomenclature of the time identified this piece as a 15 pounder. It fired 12 and 14 pound projectiles. 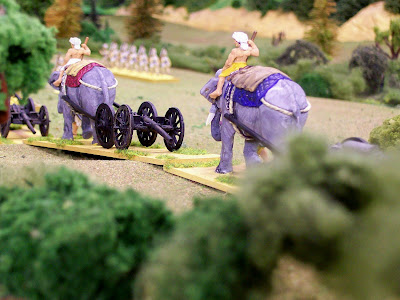 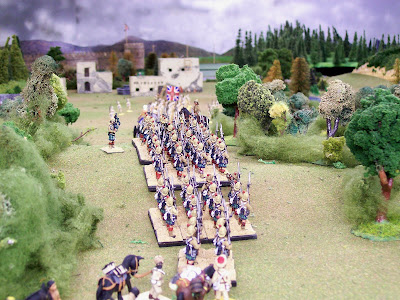 As the Seaforths top the rise, they can see Fort Grant beyond Kotar Village. 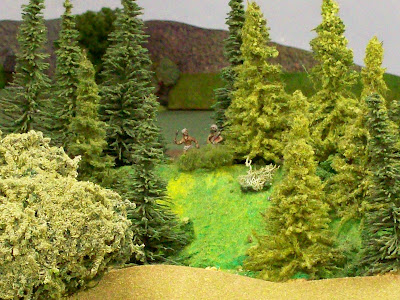 Meanwhile in the bush, two men, obviously hiding, observe the Imperial Brigade marching through the valley below. Counting, counting and counting. 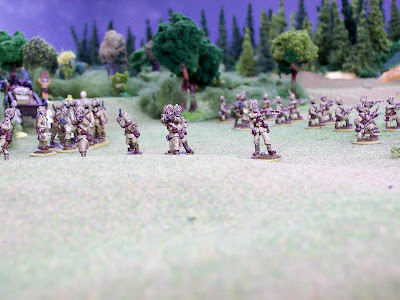 At the rear of the Column, the Bombay Miners and Sappers have deployed. Are they nervous? Have they seen the stealthy men on the ridge? Or are they being overly diligent? 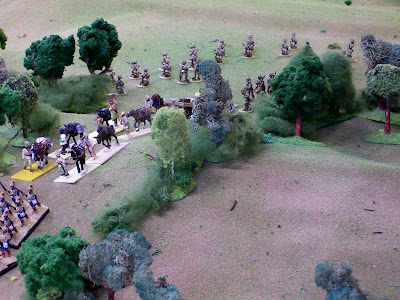 The rear is well-protected by the Indian contingent. 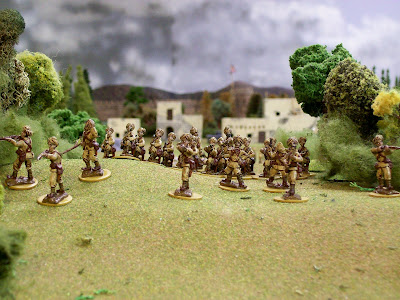 The Indians retreat steadily to protect the rear of the Column. Well done lads! 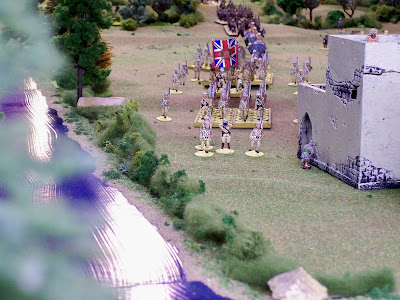 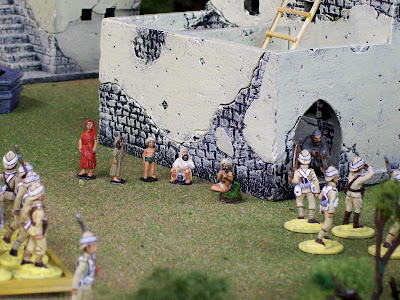 Villagers exit their homes to see the Imperials up close. One soldier turns to keenly observe the snake charmer. 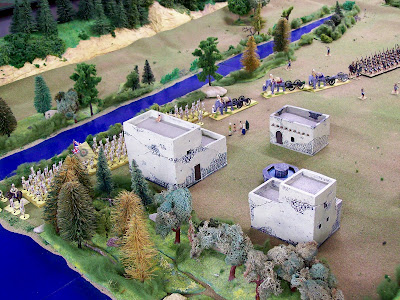 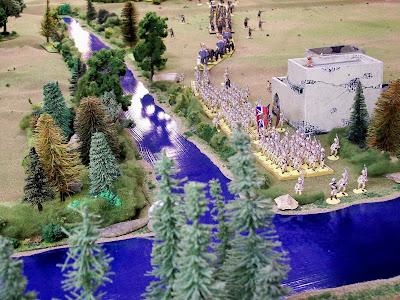 Captain Nightingale stops at the bank to observe. Fort Grant is not far across the river. He sees a party of officers riding in his direction with a mounted escort. 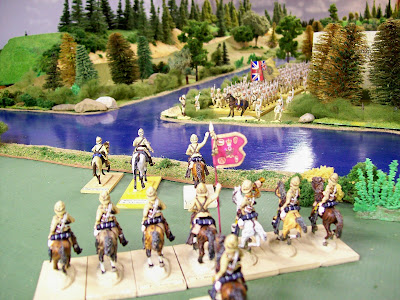 General Pettygree with Major Mitchell to his left and Lt. Col Preece to his right have ridden out to meet the Column escorted by a battle-hardened troop of the 10th Hussars. The campaign can soon begin.
----------
Remarks:
You can do this too.
The Berkshires and Seaforths are Peter Gilder Connoisseurs from Bicorne Miniatures.
Villagers are Castaway Arts.
The Bombay Miners and Sappers are Redoubt Miniatures.
Structures are Miniature Building Authority.
Indian elephants and limbers are Foundry.
Guns are Hinchliffe.
Table covering and river are from The Terrain Guy.
Villagers and Indians painted by Reinforcements By Post.
10th Hussars were kitted out by their Colonel.
Flags are GMB.
~~
Using a terrain cloth affords opportunities to create undulating terrain. Objects placed underneath can be anything, a plank, a pile of towels. magazines, picture frames and none of these things needs to be actual model terrain. Fast, easy, inexpensive and you can create larger features. Plus, you can make terrain height on par with miniatures and as tall as you like too.
----------
Click on Comments below and leave your remarks. If you don't have a Yahoo Group name, simply say you are anonymous. Names appreciated though, if you please.
----------
Posted by Gallia at 10:26 PM 9 comments: