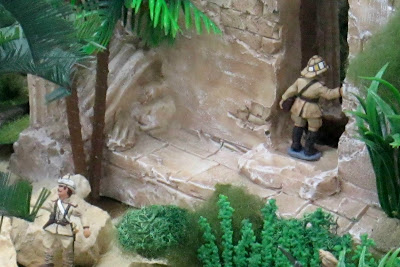 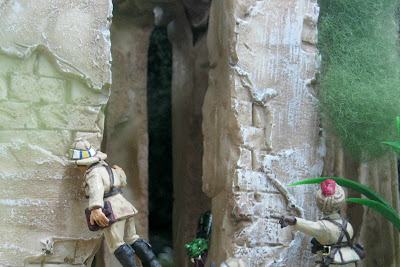 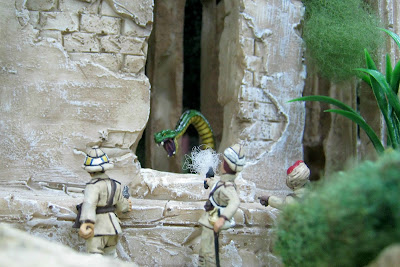 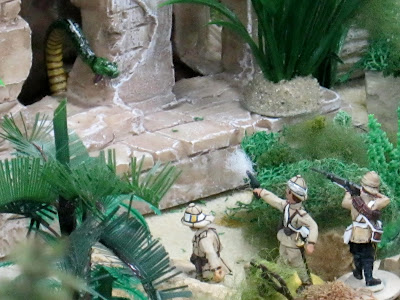 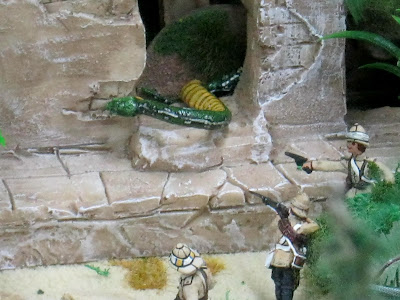 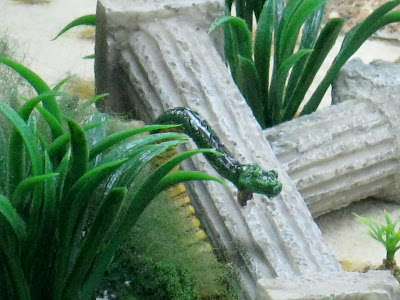 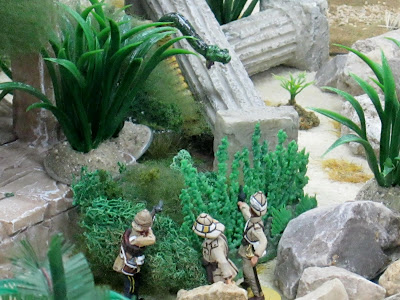 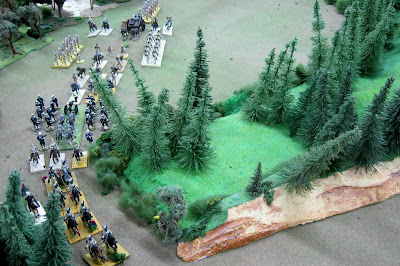 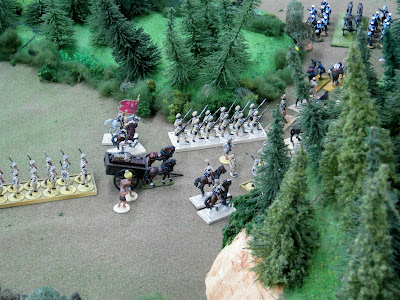 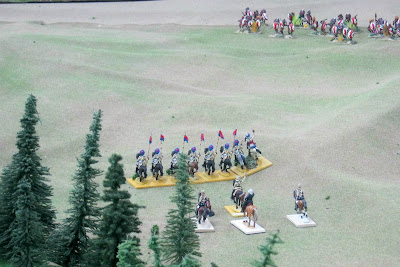 5) Your remarks add considerably to the atmosphere of the story. Please continue doing so below at the word Comments. Thank you.
----------
Posted by Gallia at 11:56 PM 5 comments: 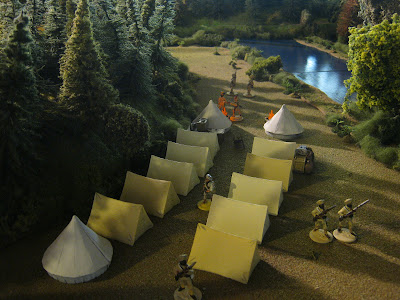 "Three days after crossing from the charted into the unmapped interior, we made camp beside a pellucid stream accentuated with luxurious vegetation. It's calming beauty was remarkable. The unremitting but pleasing sound of water gently rippling along amidst the glorious verdure entranced us. Would there be some kind of curious trout to be caught for officer's mess? As the sun set, fires flickered and a full moon countenanced our encampment, it occured to many this was truly an idyllic spot." 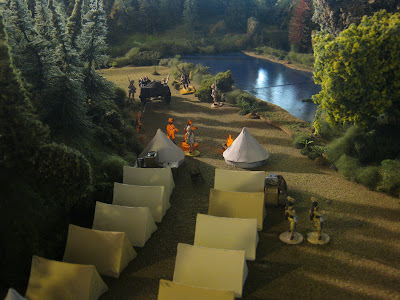 "After evening mess, I rode to the 3rd Sikh tents. As I passed a supply cart surely no one was thinking our tranquility would be shockingly ruptured by an event so tragic and unbelievable. Nor could any one imagine the event would forever so singularly modify our attention toward unthinkable possibilities."

"However, I am ahead of myself. Before we arrive at this fateful moment, allow me to return to our departure from Dongolo Camp six weeks ago that you may contemplate our journey in proper order." 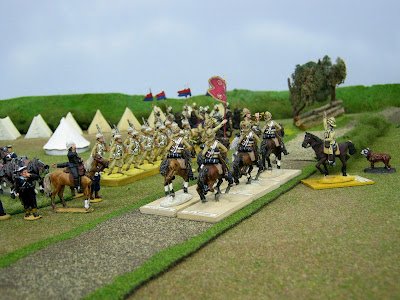 "Our departure commenced with a section of 10th Hussars leading the way as scouts. They had often done so in missions emanating from far away Fort Grant. Major General Pettygree counted upon them for much and they delivered it -- with interest." 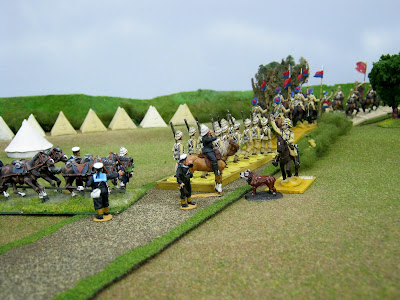 "They were followed by a section of my old regiment, the 9th Bengal Lancers as a reserve. Khaki clad Bedfordshire infantrymen followed them. Next came Captain Beatty, RN saluting and...." 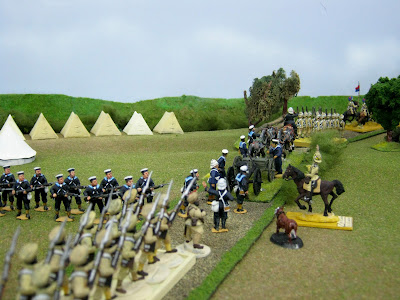 "Leading the naval shore party with a gatling gun into the column of march. They in turn were followed by the aforementioned 3rd Sikhs." 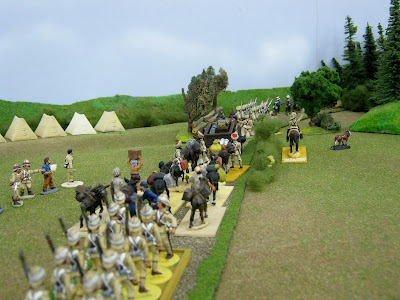 "Bearers and supply animals protected by another section of Bedfordhsires brought up the rear to close the column. Three weeks later we...." 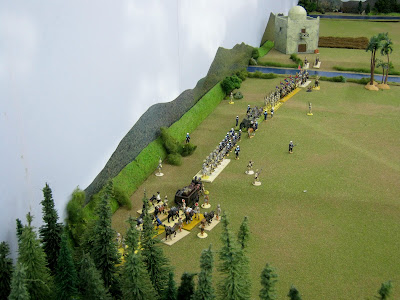 "Came upon the last vestige of so-called mankind; an abandoned dwelling formerly inhabited by a family of some prominence." 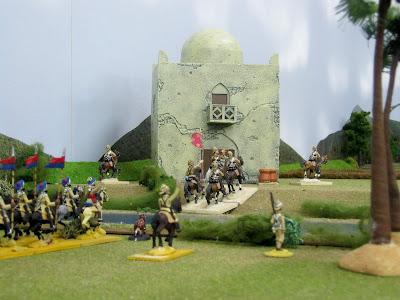 "I wondered if anyone had been within when the Romanov Expedition and herself, Countess Alexandra, passed near." 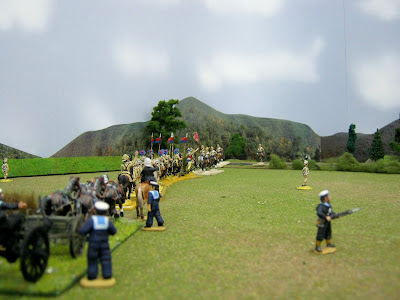 "Another fortnight passed marching through flat lands intersected with uncountable streams. In the dry season every one was easily forded without incident." 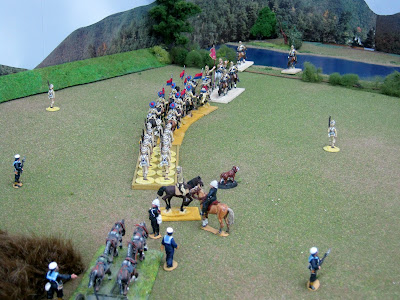 "Each crossing was so routine and uneventful, I scarcely remembered the warning from Padre Michael of astounding animals said to inhabit the region into which we were going. Nor did I think at all of the gargantuan tooth shown to me by Mr. Wyatt at our last meeting back in Dongolo. A fresh water shark spat it out he had been told. Impossible rubbish." 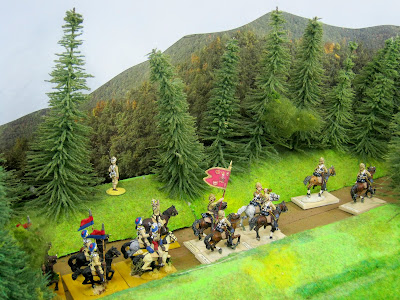 "On the 22nd of September we entered a narrow mountain pass. Our maps had been useless for several days because we finally obtained the great unknown beyond all that had been charted by civilized man. We now trod upon the threshold of terra incognita " 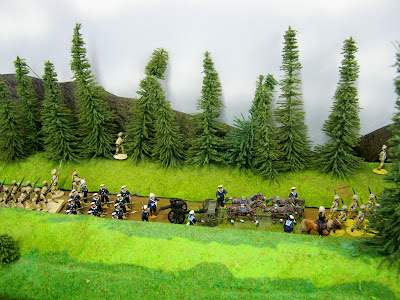 "From now on we would observe what no one save the Romanovs, unrecognized explorers or dead ones had ever seen. What wonders would we discover? What dangers might lay beyond the next bend? Moreover, was there any hope of finding the lost ancient city of Alexandrapour? Would it appear within the primeval and mysterious lands ahead or was it a cruel fiction? If it did exist, why did the Romanov's desire it?" 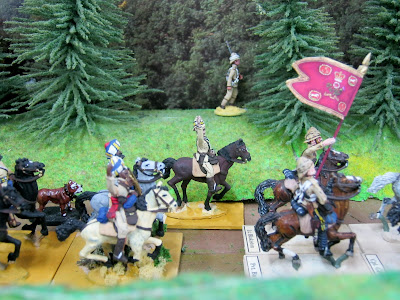 "In the mid-afternoon scouts discovered a picturesque river setting; a perfect place to encamp to rest ourselves and the animals for several days before pressing on. As remarked earlier in my narrative, that evening I went to the camp of the 3rd Sikhs." 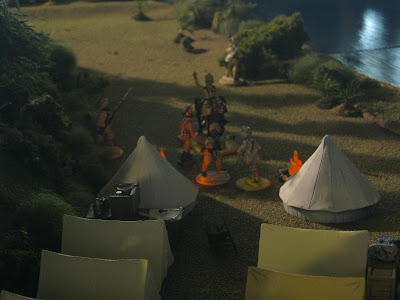 "I found Nazim at the head of the camp in the gathering darkness. I waived a hello." 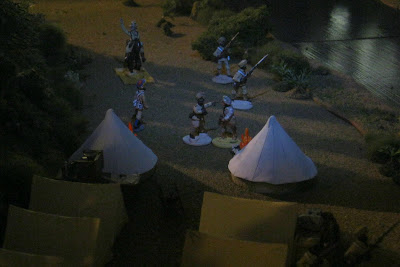 "Also present was Captain Rajgupta ordering a bhistie to the river to replenish water for the fireside. The latter instantly obeyed and walked to the edge of the stream carrying his familiar goatskin bag. I noticed sentries were nervous about something." 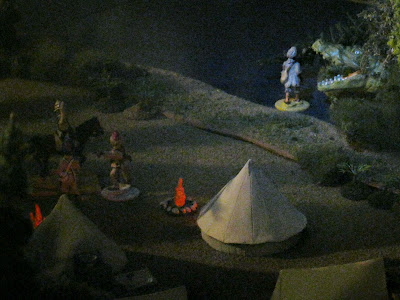 "In a flash we knew why. An enormous reptilian head lurched out of the river with uncommon speed, opened its jaws and snatched the poor bhistie...." 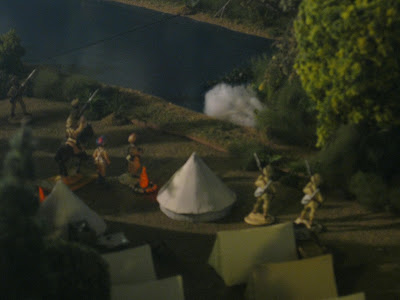 "Into the depths of the water before he could jump away. If there were screams, they were instantly drowned as the wretched man was crushed, torn apart and taken to a secret underwater lair. We stood dumbfounded, shocked and in disbelief. Nothing could be done. Nor did we trust to charge the riverbank in the gloom. The man was gone - taken by an impossibly enormous river creature none had ever seen before or lived to talk about."
----------
Comments welcome.
Next Installment: 18 March 2012.
----------
Posted by Gallia at 12:03 AM 9 comments: