We must now temporarily leave the busy activities at Tranjapour, anticipations of the men there, thoughts of those approaching and our own contemplations regarding General Pettygree's next orders. In so doing, I ask you to turn your thoughts backward in time from the 15th to the 4th of September 1898/2008. As we do this, our imaginations leave terrain south of The Khyber Pass, which you now know so well, to parts north of it, to an unknown land hidden from eyes of most of the world.

You are about to enter a lofty area enclosed within an oval of high mountains. The only entrance was blocked by earthquakes of shocking magnitudes before the memory of men. Legend told of its existence. Reason and faded memories say it never did. Knowledge of it was guarded and harshly protected.

Here we find an unlikely mixture of desert and pine forests and some surprises you will see later. Twenty years before a few of the men you are about to witness sought asylum here to build a new homeland. It became a refuge for an old Nemesis to Imperial authority thought destroyed. No, not destroyed. It retreated here to restore and rebuild itself and the cause.

Welcome, but have a care. Watch from behind high boulders above and make your presence not known. No one outside the valley knows what you about to see. I do hope you make it back to Fort Grant alive. Ladies and Gentlemen, you are about to enter The Hidden Valley of Surajistan. 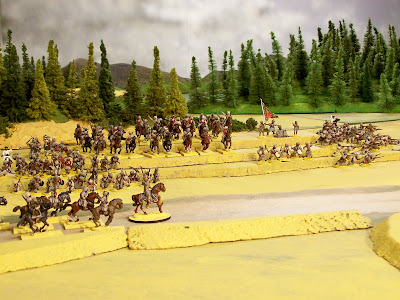 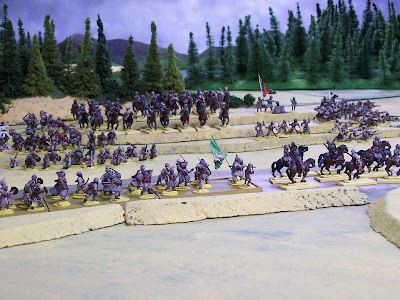 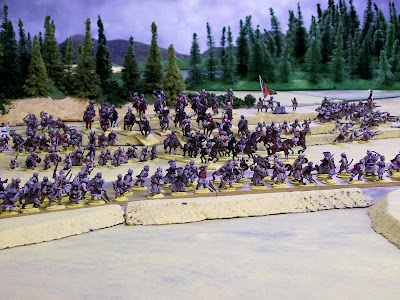 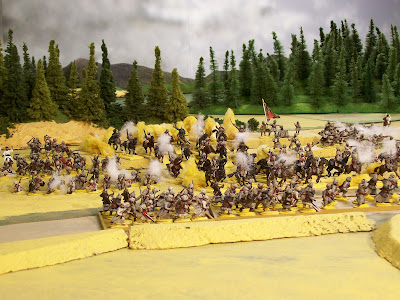 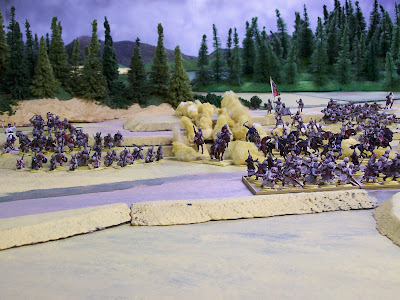 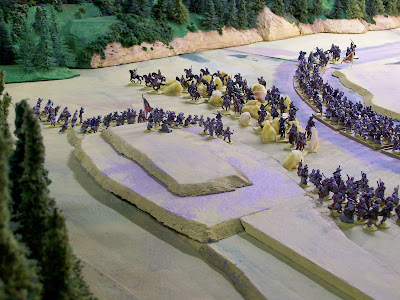 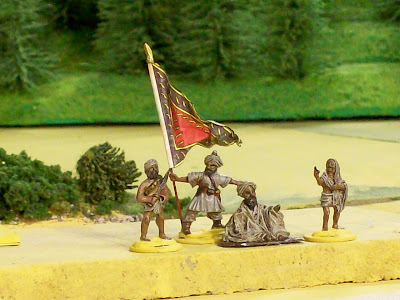 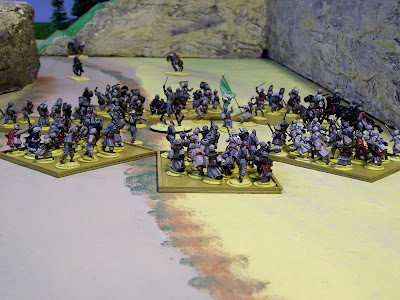 We advance our clock three days to the 7th....

We advance our clock further, this time eight days forward to the 15th.... 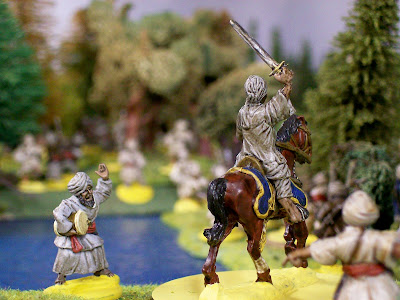 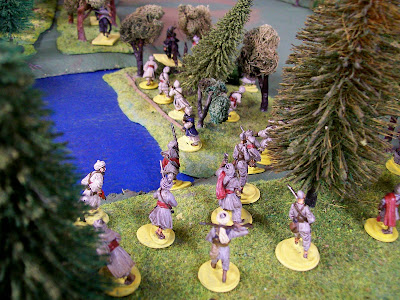 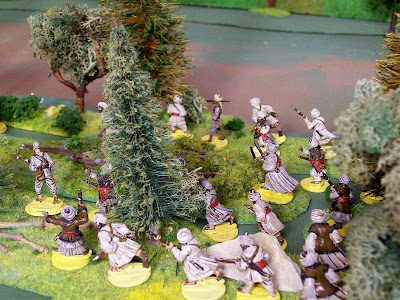 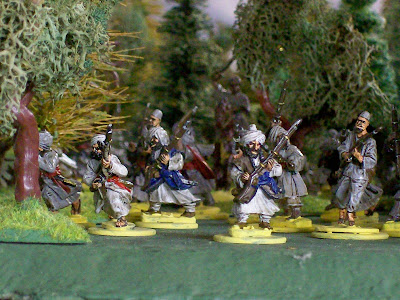 
What contemplations do you have dear readers and viewers? What will new orders from General Pettygree demand? What of KHAN's attack force now so very close to Tranjapour? Indeed what will be the fate of the garrison of Tranjapour? Will works be built fast enough or not? Permit me to ask you to return in two weeks time to find out. Meanwhile, what do you think?
----------
Posted by Gallia at 6:26 PM

Perhaps we/you need to reveal the real identity of Muljadhi's guru?? In that way warning might reach the garrison in time.... :o))

"Cholmondley scratched idly at his armpit as he watched Muljadhi take another sip from his sherbert as his troops paraded in front of him. Oh for a chota-peg with the boys in the mess, and a good hot bath....! Time was pressing, and it would soon be time he left"

as usual, nice job ...
but didn't I see a figure of an infantryman with scimitar and shield?
??
Arthur

Wonderful photo journey. I especially like the stormy tone of a couple of the early ones.

I'll be sure to come back and see the results of the attack on the British.

Thank you Gentlemen,
for your very kind remarks and support. I needed to get Chapter 4"Nemesis" in here this past Monday {fast!} so afterwards I could easily concentrate on the Seven Years' War BIG Battalion game on 11October hosted by Der Alte.
----
However, while doing so I have been contemplating Colonial possibilities and also painting up a few things needed for same.
----
Steve: The Guru is adapted from the same fellow in "Gunga Din", the motion picture, that is. He and The General were made by ??? manufacturer. I can't remember which company right now. That company also produces son Chota and the three sergeants. Chota appears without fanfare or notice in captions in Chapter 2, The Battle of Japura Singh.
----
Arthur: There are no Crusade's Saracens, though, hmmmm, those fellows might be a good idea, if that is what you are referring to. I don't have any of those.
----
Brent: Yes indeed. The battle at Tranjapour is imminent. However, I will need to rest up from the "lark" as you say before I get it in.
----
Nemesis warriors are mostly Old Glory 25mms, some Stadden 30mms and Hinchliffe 25mms. Castaway Arts 28mms and Willie/Suren 30mms have yet to make a debut for the camera. Muljadehi is a Willie. I might obtain some Foundry warriors one of these days. We'll see. Notice how the different sizes and proportions don't matter in the photographs.
----
Cheerio,
Bill

Bill only read the latest instalment tonight- what a great job! I look forward to the nexT!
keep up the good work
Alan

I think that the Imperials should stay out of the Khyber Pass. It seems like only bad things can happen there. I had best get to work on raising a regiment of Seaforth Highlanders to come to your assistance. Ah, I can hear the skirl of the pipes even now...