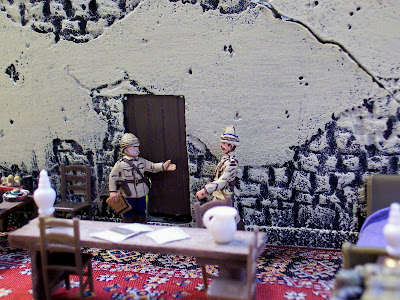 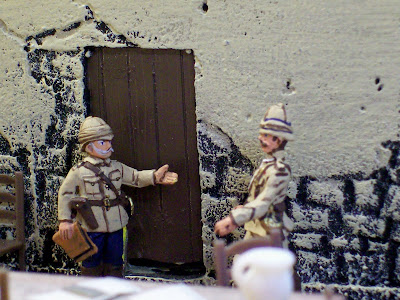 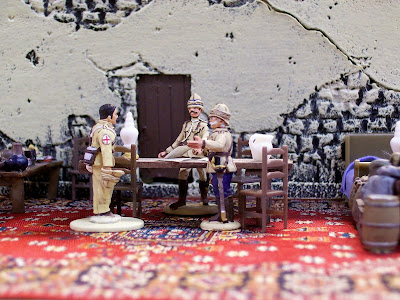 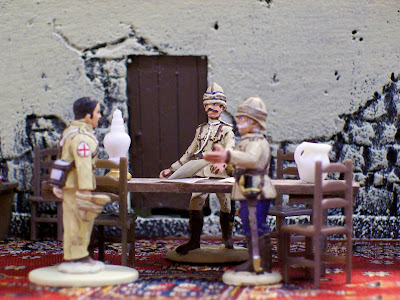 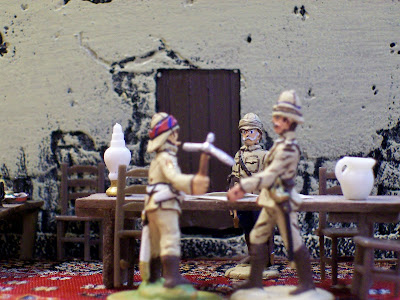 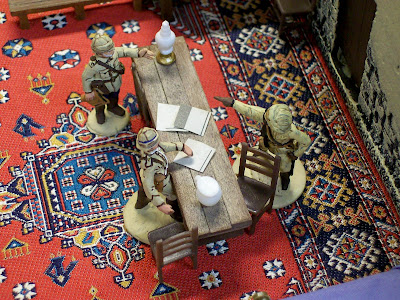 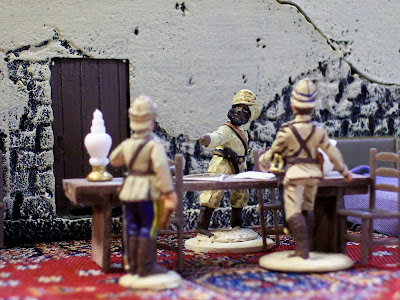 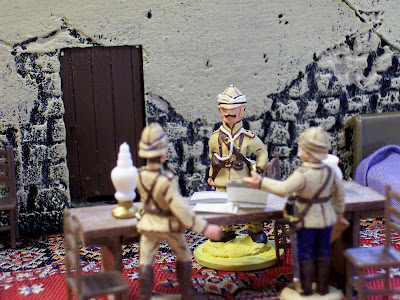 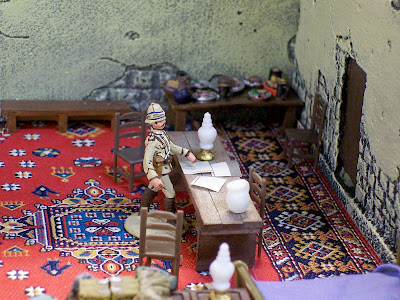 Alone now, the general has decided the next move. Return next time to learn his decision.
----------
Closing Remarks:
1.George Bruce's. The Stranglers, The Cult of Thuggee and Its Overthrow in British India proved to be of value in understanding the gruesome historical nature of Thuggee and its suppression.
2. The "Miniature Oriental Carpet" was woven in Istanbul. Truly! I found it on a rack in a grocery store. There were several sizes, patterns and color variations. See http://www.orientalcarpetcreations.com/ for information.
3. Some of the furniture comes from model railroading, O Scale. See Walther's Catalog, product 653 1452 Living Room set. There is also a bedroom and kitchen set. The lamp is product code 164 539. Each item is in the $4.00-$5.00 range.
4. From November till now the blog was essentially in hiatus. An intermission one might say. There were Seven Years' War historical miniatures battles to organize and game along with a few forays with 15mm Flames of War. Naturally there was Thanksgiving, Christmas and the turn of the year as well. Finally we are undergoing a satisfying learning curve with the new Blitzkrieg Commander II tabletop rules. We are gaming 1941 Libya and I've been painting trucks, trucks and more trucks for our collection of the 7th Armoured and 21st Panzer Division battle groups.
5. Your remarks are welcome below. We are back!
----------
Posted by Gallia at 10:30 PM

First, THANK YOU, I'm not feeling well right now (kidney gravel and a bum knee) so I needed a "Colonial fix".

Your scenes are wonderful. I particularly liked the cracked, bullet-marked walls and the wonderful carpet . . . but, of course, the figures and furnishings were wonderful too.

Please give us more.

Interesting story in the development. I wonder what adventures it will lead to? I like the interior pictures too.

Thank you Jeff, Mad Carew and Der Alte!,
---
Jeff, I hope you can get better ASAP! Perhaps I should send Dr. Watson to see you.
---
Respectfully,
Bill

Bill - excellent as ever..

I picked up BC II myself yesterday so that is also interesting news...!

I love the carpet, What a find!
Looking forward to the next installment.

Wonderful vignette. This is the stuff that makes wargaming a "hobby" and not only a game. Also thanks for the info on where to find the furnishings!

Welcome back! Great post. You know your audience - the first thing I was about to comment on was the carpet (but you've already answered my question)

I like the carpet.The product codes for furniture will be useful

Sorry, I should have mentioned this earlier . . . BATTLEGAMES Magazine is also my only hobby subscription . . . and here in North America you can get your subscriptions (as I do) from ON MILITARY MATTERS:

Thank you again Everyone!,
---
The earth has been terraformed for the next installment. The Director may be able to call out, "Silence, Camera and Action" as early as tonight to commence Chapter 28.
---
Respectfully,
Bill