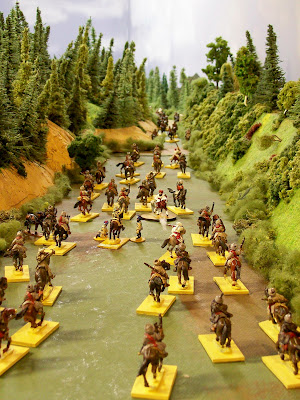 After the battle of the 16th., KHAN's Army retreated homeward  to The Secret Valley. You see his Rear Guard, The Red Sash Horsemen within one of the canyons on that journey. The stronghold is still an unknown number of days away. The Main Body is just up ahead out of sight.
The Red Sash Horsemen have three Imperial prisoners (photo center). Suddenly a horseman on the right levels his jezail firing at them! 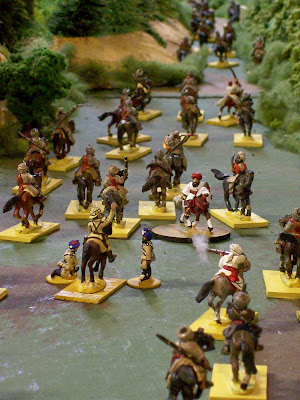 There he is. What is his game? The Red Sash Commander with drawn sword has turned to find out. 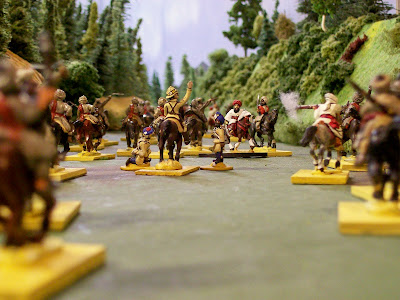 He appears to be firing at three soldiers from The Khyber Field Force. 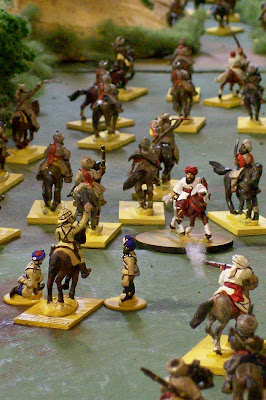 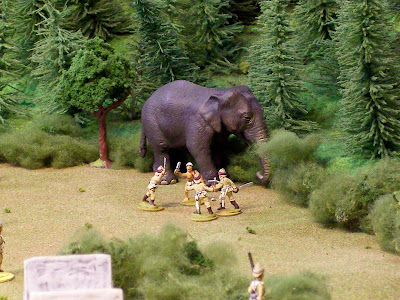 Annie out for a stroll whilst her friends Gunga Din and Sgt. Cutter propose a preposterous scheme to two other RE sergeants. Discussion appears animated. Whether duty and/or reason will prevail only time will tell. Meanwhile, we return to more sober subjects as we observe.... 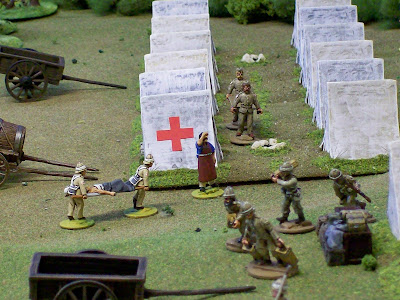 Assistant Surgeon 'Doc' Shaefer wiping his brow. Tired? Yes. However, he has the satisfaction knowing the number of wounded returning to duty has  been more than satisfactory. We might even conclude camp will be broken soon because of ammunition wagons being reloaded. 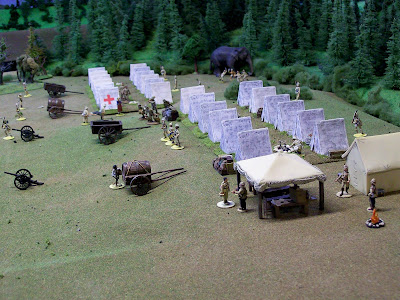 More of the camp comes into view. At headquarters, Chief Surgeon, Dr. Watson (helmet in hand) is presenting his medical report to Officer of The Day, Major Trevelyan, 10th Hussars. {Whitish tents on loan from the collection of Der Alte Fritz. Those in the lower right are new tents from Miniature Building Authority.} 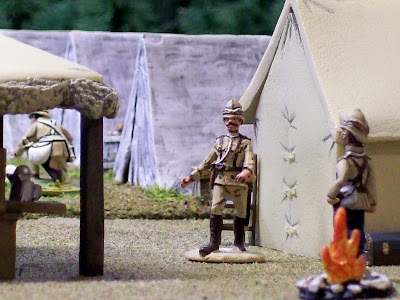 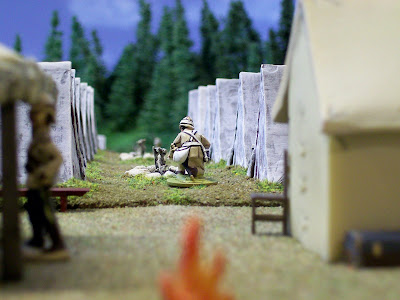 A soldier tends his fire nearby. 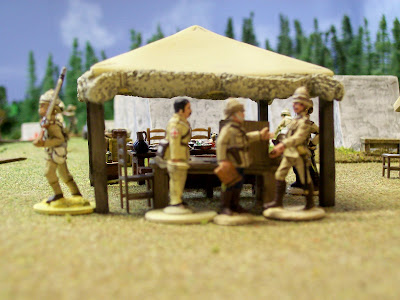 Dr. Watson: "Yes, General. Of our 76 casualties from the two battles of the 16th instant, as of today, only seven died, three are missing and sixty-six remain under care."

General Pettygree: "Yes Doctor. Very good. Hope for even better results in the next week or two."

Major Trevelyan: "Meanwhile Col. Lawford and two of his sowars from the 9th Bengal Lancers remain missing. It is thought they were taken prisoner during the charge and melee on the right flank. We've not found them."

General Pettygree: "Quite so. Poor devils." 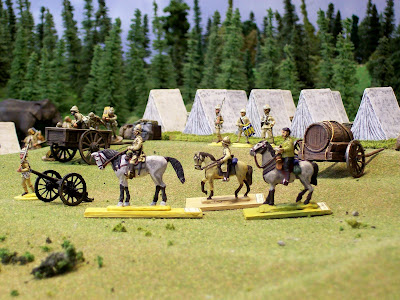 General Pettygree to ADC Major James Mitchell: "I am confirmed in my decision Mitchell to return to Fort Grant. We carry too many wounded and the fort is without sufficient garrison for the long term. You may take that down Mr. Pearson for The Times readers, if you please. Now let's take a look at the men."

Mr. Pearson: "What of Col. Lawford Sir and his missing men?"

General Pettygree: "Aye, but there just might be a chance, though slim to rescue them." 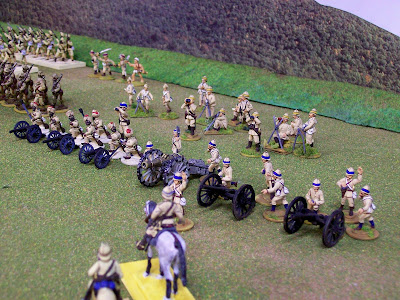 The First Indian Mountain Battery {left} and the Elephant Battery are the first to receive the General's gaze.
The former suffered five casualties. Of these one died, one recovered and three remain in hospital. One man fell amongst the elephant guns who remains too wounded to return to duty. 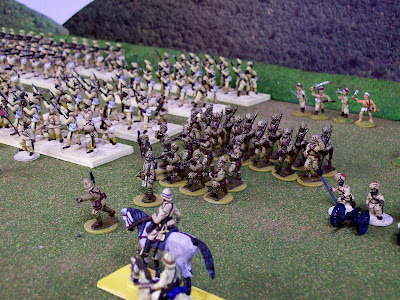 Next are the plucky Bombay Miners and Sappers who suffered ten casualties.  Three recovered and seven remain under medical care. 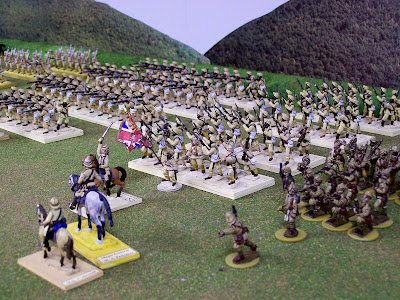 The well-tested 1st Sikhs had twenty-one casualties. Only one died, two recovered and the rest are still being cared for. 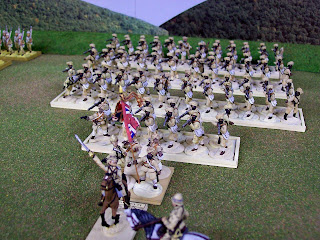 Of twelve casualties among The 2nd Sikhs, two died, one recovered and nine remain under care. 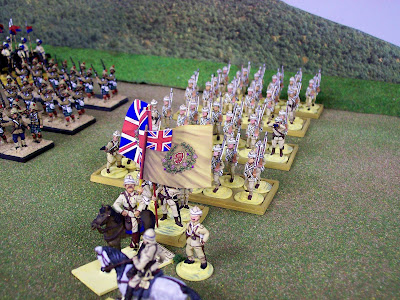 Thirty-two Berkshires were wounded. Amazingly only two died, eight recovered leaving twenty-two under the care of the medicos. However, when the canpaign began, the battalion numbered 101 soldiers. Count what is left, if you please. 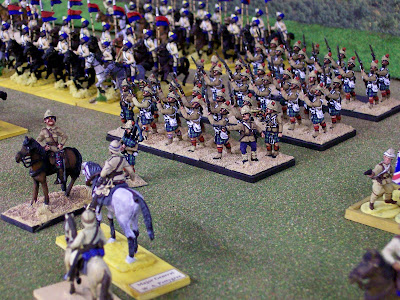 Col. Sinclair: "Good Morning General! I hay' the honor to report  only ten wounded, one poor laddy succumbed, I scare believe not more and of the rest one is back to duty whilst eight remain with the Doctor." 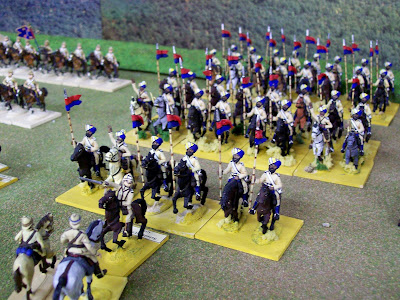 General Pettygree: "I'm sorry to learn your Colonel is among the missing, perhaps a prisoner with two of the sowars. That leaves you as the sole British officer in the 9th Bengal Lancers."

General Pettygree: "Due to your conspicuous duty helping to save the left flank, I promote you to a captaincy placing you in temporary command in Senior Captain Paget's absence."

Casualties were fourteen. Three recovered, three are missing in action including Col. Lawford and eight remain in hospital. 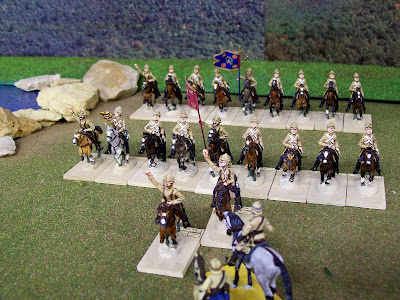 The 10th Hussars guarded the rear of the Khyber Field Force two days ago suffering no losses. When the campaign commenced the regiment had 26 men. Twenty are pictured. Attrition. 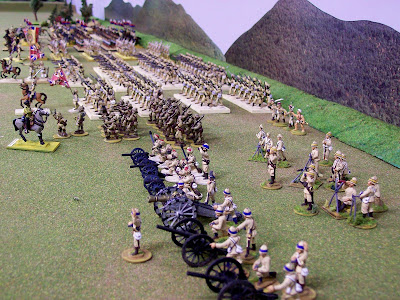 1. KHAN'S losses were 276 miniatures. In the course of the next few months 86 recovered; the rest lost.

2. Pettygree's losses were 105. Immediately after the engagement 21 recovered 9 were lost, 3 deemed captured, the rest remaining under care.

4. When campaign time reaches 1 December 1899, D6s will again be thrown for the Imperials still under care.

4. Dr. Watson's staff was thought to have better medical care than KHAN; a campaign convention (liberty?) to keep the Imperials in the field longer against a foe vastly outnumbering it.
----------
Your remarks are welcome below at the word "comments."
----------
Posted by Gallia at 7:23 PM

The review looks like some of the pictures in the Michael Barthorpe book on the NW Frontier. The camp accessories are growing nicely too.

Excellent pictorial account as usual! I love all of the "extras".

As for casualties - I'm reading Churchill's account of the Malakand Field Force and have been struck by the low number of casualties on the British side and high numbers on the enemy's side (if anything, even more lopsided than your numbers, but then again the numbers of natives involved were much higher, too). Better medical care for the British side seems to be right in line with the reality, too.

Bravo for yet another fine pictorial account of the Northwest Frontier.

Another great report! And what is the fate of the 3 prisoners? Maybe this is rescue attempt.....?

Enjoying the campaign! I have a Mafrica map I got years ago while following the Dakla River campaign but never learned Jack Scruby's actual map mechanics and would love to know how you go about it - alternate or simultaneous moves, move distances (terrain effects: mtns, river crossing, etc.?), translating map contact to the game table, etc. Thanks. Keep up the great work.!

Hi Dan,
Map use is all free form. No rules - simply background.
More flexible that way for this kind of story.
respectfully,
Bill