"The sudden and unexpected appearance of two Romanov Expedition horsemen racing toward us earlier today was an extraordinary surprise. Given the age or the trail we had been following, we thought their party to be at least a fortnight's march distant. At first we did not know what to make of it. The large carnivorous felines that had been chasing them when they erupted into view was not the reason for their arrival. It was something else."

"One of the horsemen brought to me was a Captain Tumarkin. His introduction to me unabashedly admitted he was a member of an archaeological party seeking ancient ruins from the era of Alexander The Great. He and his companion were riding back to Dongolo to report a shocking disaster when they came upon us." 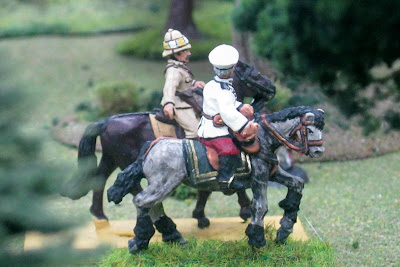 Lawford: "I am surprised to find you here Captain."

Tumarkin: "No surprise Colonel. Fate has brought us together for which I thank God. If I may ride with you, I will explain and afterwards ask a favor."

"Intrigued, I did not anticipate this honesty. Desiring to learn as much as possible I agreed to allow him to journey with us." 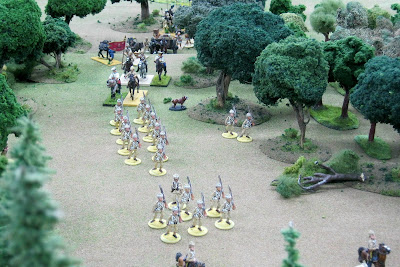 Tumarkin: "You marched from Dongolo, da?"

Tumarkin: "Then no doubt your political people told you about our arrival and departure from there, da?"

"Seeing my nod, he continued."

Tumarkin: "For many weeks after our expedition left Dongolo, the march was idyllic. It was a walk in a park, as you say in Britannish. Then several days after we had passed into uncharted lands...." 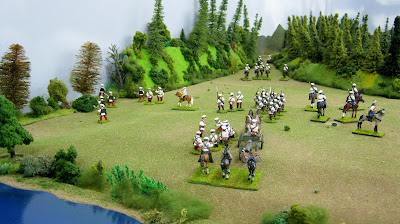 Tumarkin: "We crossed another of the innumerable water courses, halted and sent some of our horsemen ahead to scout a defile." 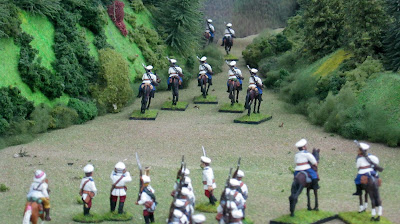 Tumarkin: "We watched them proceed into the narrowest portion of the gap." 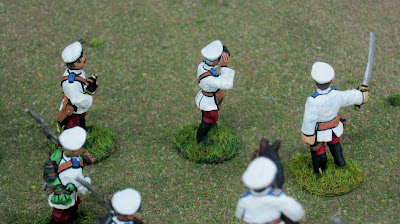 Tumarkin: "At first all was well. However, in next instants my binoculars brought a dust cloud suddenly into view." 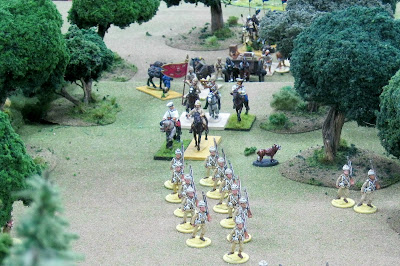 Lawford: "Indigenous natives I presume? We had a serious brush up with unknown warriors recently."

Tumarkin: "At first we did not know because...." 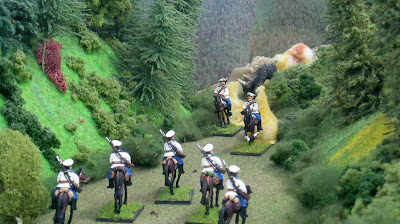 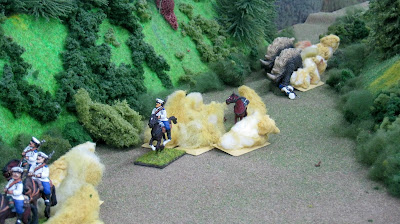 Tumarkin: "In another moment though I saw all the cavalrymen turn about urging their horses into a gallop. One unfortunate man was thrown. To my astonishment he was trampled under a hairy beast to my knowledge no one has ever seen. In fact, there were two of them in hot pursuit of our horsemen." 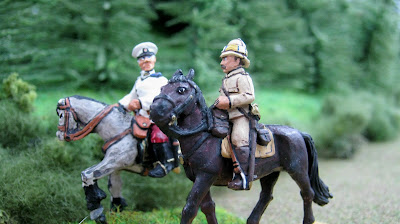 Lawford: "We have seen such creatures. Large woolly animals resembling elephants charged our mounted vedettes and...." 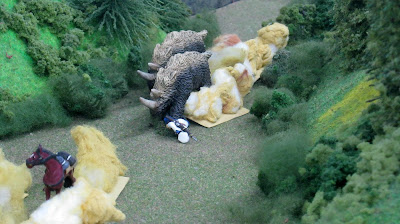 Tumarkin: "No Colonel they reminded me of a kind of rhinoceros but I do not know. These tempestuous brutes were bent upon more prizes. I doubt they could see our infantry through the increasing dust raised by our horsemen. Onward they came." 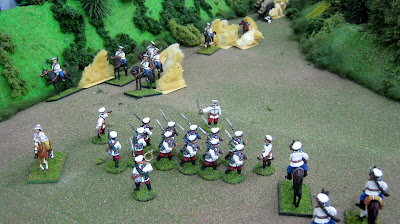 Tumarkin: "The leading section of infantry was ordered into line. The Countess Alexandra retired to the rear and her uncle Colonel Villainovich brought forward additional cavalrymen." 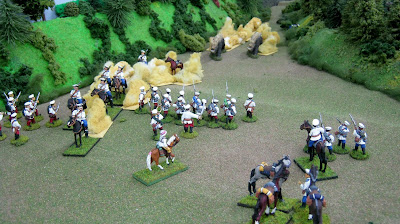 Tumarkin: "Should the animals not retire we prepared to receive them as quickly as humanly possible. Additional infantry came up on the left while the cavalrymen on the right dismounted. Everyone loaded but we had to wait for our fleeing vedettes to pass through our line to fire." 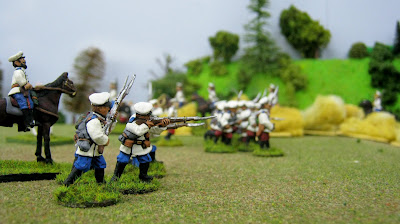 Tumarkin; "I heard the inevitable orders. Present and...." 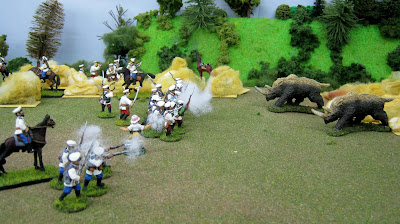 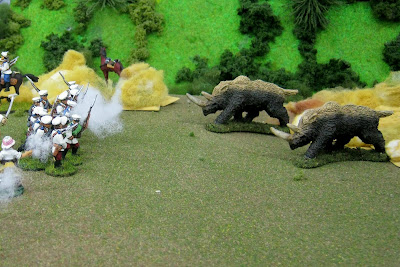 Tumarkin: "As God is my witness, our bullets had no effect!" 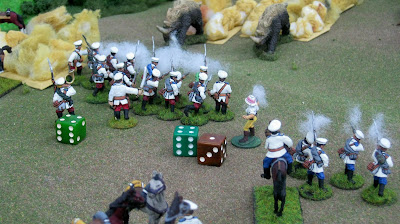 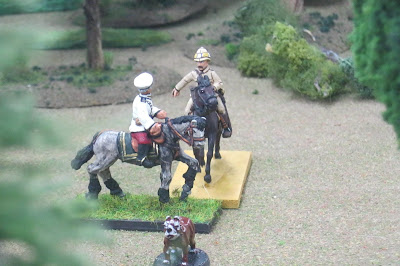 Lawford: "My dear Sir. Is this the shocking event you alluded to earlier?"

Tumarkin: "Colonel, I wish it was. I shall explain later as I continue...." 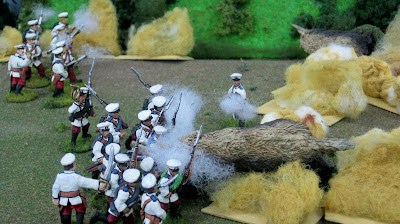 Tumarkin: "The beasts continued their charge sounding the most frightening of bellows. Luckily one of them turned away and crashed into a hillside. The other continued straight at us. We are of course known for our stubborn defense." 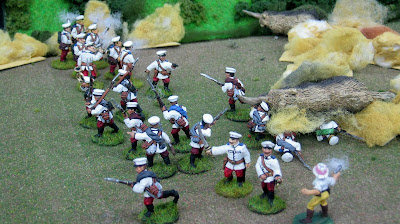 Tumarkin: "But this was more than any mortal man could tolerate. The line broke except for myself and the Countess Alexandra. We both emptied our weapons into the creature. The beast then tripped crushing three of our men who could not get away in time. 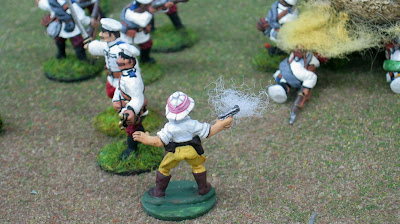 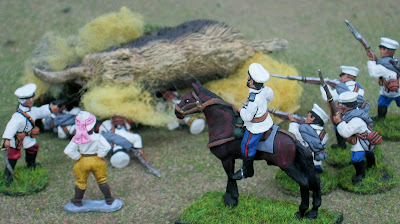 Tumarkin: "Later we discovered that our initial volley had indeed killed each animal. However, like mortally wounded horses, each continued in their rush toward us as death overcame them. Even so, we approached the nearest one with caution as the dust settled." 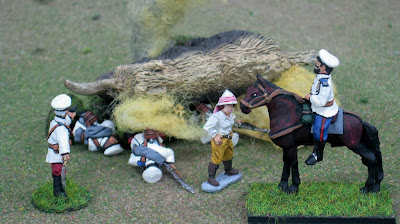 Tumarkin: "The Countess, Colonel Villainovich and I remained to view the carnage." Our three soldiers were unfortunately dead." 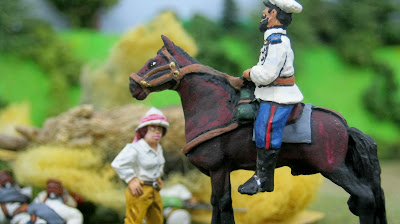 Tumarkin: "I heard Colonel Villainovich say, 'My dear niece, Nothing can be done for these three poor soldiers except a proper Romanov Orthodox burial nearby. We will camp here for the night and continue tomorrow to our goal." 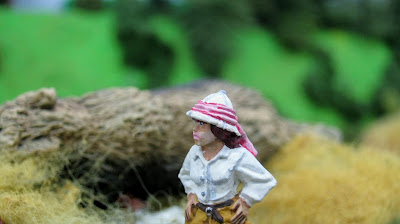 Tumarkin: "She replied, 'Da Uncle. We will indeed continue. Nothing must stop us. The mission is too important." 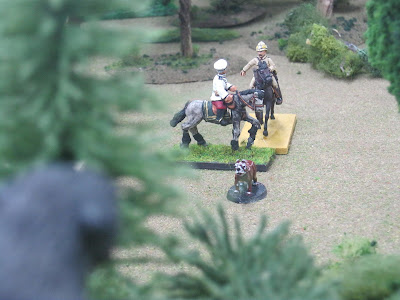 Tumarkin: "Yet this was not all Colonel. As we continued our march, even more astounding incidents plagued us in an increasing crescendo of alarm and mystery ending with the final shocking incident which finds me encountering you."

Lawford: "Quite so. You have my attention. Pray do go on. --- Brutus? What do you see boy?

Tumarkin: "Perhaps another of this land's terrible creatures?" 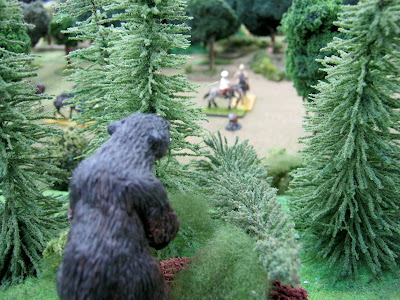 Lawford: "We have seen some of our own. A huge river reptile, one giant insect egg, a pair of great elk, two intemperate woolly elephants, giant serpents and the tigers with enormous canine teeth who chased you into our view earlier today." 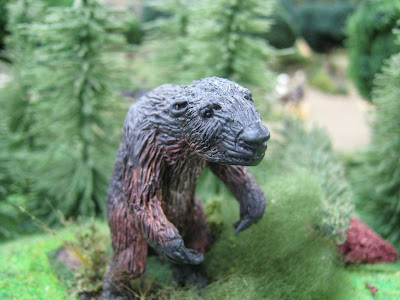 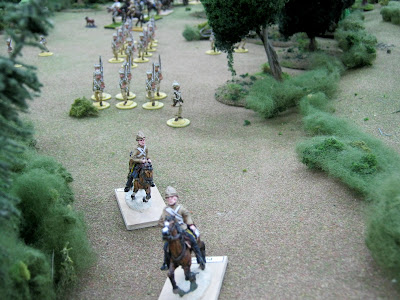 1. The colorful, well-painted and very interesting beasts are on loan from the collection of John B. They are a delight to enter into our story. The angry pair are wolly rhinocerouses. The solitary critter within the forest is a giant sloth. The latter appears to be kind of friendly don't you think?

3. Rattrap Productions carries the giant sloth here: http://rattrapproductions.com/store/index.php?main_page=product_info&products_id=37﻿﻿﻿﻿﻿﻿﻿﻿﻿﻿﻿﻿
It is shown in their "Bazaar" listing.

4. Countess Alexandra fans! She will appear a lot more in next chapters.

5. Only four chapters left after this one.

The imagination and sheer cinematic quality of this adventure remain a delight. You're right about the sloth, far too friendly!

Good stuff. I have recently come to these adventures and really need to go back to the beginning.

If I may ask, where did you get the figure for the countess?

Elderac:
---
Copplestone Castings
BC19 Female Archaeologists
---
I can't remember the manufacturer where she has her hands on her hips. I thought it was Foundry but can't prove it. Anybody know?
---
Thank you Sirs for your kind remarks and interest.
---
Respectfully,
Bill