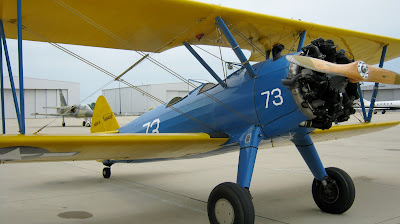 On June 23, 2012 one of my "Bucket List" wishes happened. I flew in a Stearman bi-plane on my thirty-third wedding anniversary. My terrific wife Dorothy found it for me. "The N2S Stearman was a primary trainer during WWII, many allied pilots during the war got their first flight time in the Stearman." Mine was originally built in 1942. 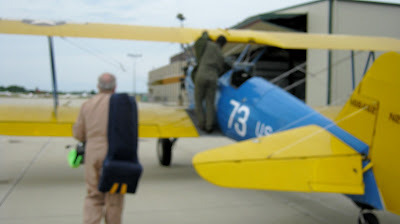 Walking To The Stearman

During my pre-flight briefing I was carefully trained and listened with heightened acuity as I was told how to actually fly, bail out and work the circular WWII-esque parachute. Instructions were also given at the plane where to step, grab and so forth. I was surprised to discover the exterior was mostly fabric. The pilot is standing on a black strip on the wing. No fabric here; wood instead to support weight. 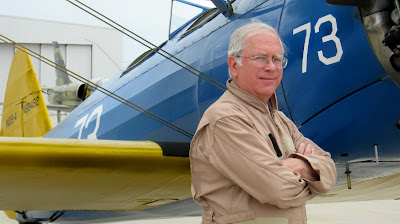 Co-Pilot For An Afternoon

In flight I was given the opportunity to move the joystick and rudder pedals. At first I hardly moved them at all - almost frozen lest I over steer and send us crashing into the earth. That would have been hard to do since the pilot was behind me ready to take over the controls if I erred. 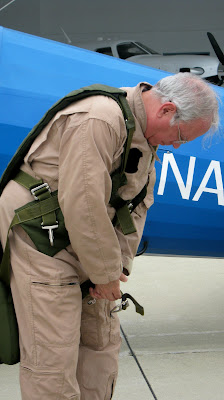 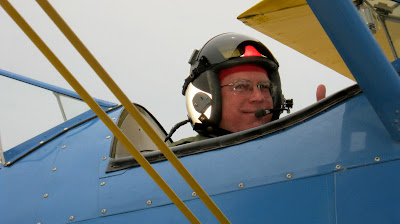 Thumb's Up.  Ready For Takeoff

Later the pilot did what I thought was a barrel roll. Not sure but that is what I thought he said over the mike. I declined the offer to control it. This involved banking a lot, pulling back the joystick to go up and then diving steeply flying in a tight circle. We did two to the left and two to the right. Exciting stuff. As I looked outside the aircraft my body was horizontal to the ground. I could not fall out but thought about it.

We sped along at roughly 2,000' averaging 80-85mph, it was a warm day and it was just marvelous. I thought you might enjoy the story and photos. Roughly a forty-five minute flight time. 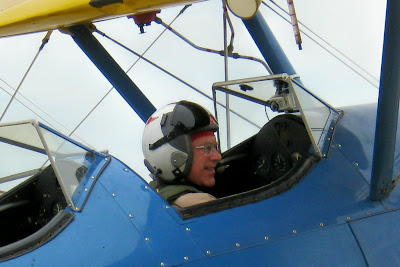 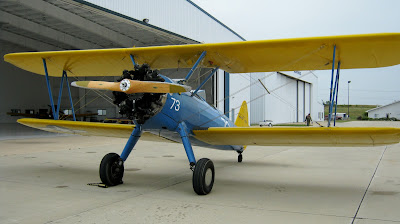 1. To fly the Stearman or several other aircraft west of Chicago, IL USA, see:
http://www.gauntletwarbirds.com/

2. What's next? Fly in Aluminum Overcast, a B-17 based in Wisconsin USA.

3. Comments welcome as always below.

What a beautiful aeroplane, and you look the part most convincingly Bill.

Congratulations on your anniversary and many compliments to Dorothy for choosing such a splendid gift.

Happy Anniversary there, Flyboy! It looks like it would be a lot of fun.

Hey, do you see any WWI biplane wargames in your future now?

Way beyond cool Bill! And to think you only had to "serve" for 33 years to get the opportunity. Hmmm, I have number 40 coming up, I'll have to start my list!

Congrats to both you and Dorothy, and may you share many more together.

Bravo Bill! The current Mrs Steve the Wargamer bought me a flight in a Tiger Moth for my 40th.. I still remember it.... a barrel roll above Chichester Cathedral (I looked up and could see the spire "pointing" at me!)... but a low buzz of the airfield was just superb at the end...

Super photos and what a splendid gift to get.

What a great anniversary present! =)

Congrats on the Anniversary. My wife and me are celebrating our 25th this summer. I am now following you. I am at http://forhonourssake.blogspot.ca/ if you are so inclined to visit ... Jeff

fantastic, absolutely fantastic, if your anniversary present is any indication of your marriage you have been a very, very happy man.

I have been lucky enough to have a ride in a B-17 and it is not to be missed! However, your flight was far and away different, wind in your face and a parachute! The B-17was owned by:
http://www.collingsfoundation.org/menu.htm