"Expedition To Alexandrapour's story essentially concluded with my previous remarks entitled, Buried Alive. Our extraordinary adventures in Terra Incognita were very possibly the most remarkable experiences in human exploration. How could one honestly argue otherwise when learning the facts?"

"Recall the appearance of long extinct animals, near constant opposition by nature allied with intemperate humans and the singular discovery of Alexander The Great's amazing underground city. But that was not all. Now buried by an earthquake under millions of tons of stricken rock strata lies abundant treasure and an infernal energy device possessing incalculable and shocking destructive power. May it remain entombed, shattered and destroyed forever."

"Unfortunately we were unable to bring artifacts back. Our escape allowed us only the garments worn on the day of the earthquake. It will therefore be easy for scientists, authorities or anyone to abuse our story. They will cry: Impossible! No evidence! Liars! Charlatans! Others will dismiss us as as pitiful seekers of undeserved notoriety and riches. A pathetic carnival act."

"Of these criticisms I can only fall back upon my honour until another much more powerful expedition penetrates Terra Incognita. Then will my story achieve validation. Should I be called to take part in some capacity, my answer will be yes."

"Meanwhile, perhaps it will be useful for the reader to obtain a little more closure." 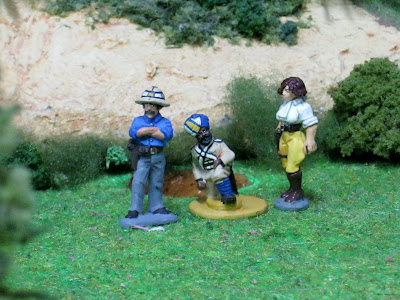 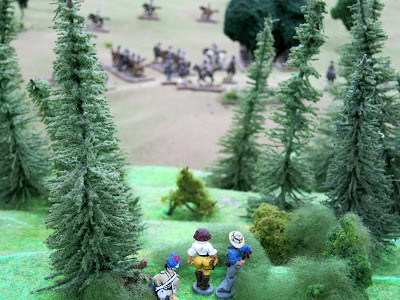 Lawford: "We found ourselves upon a high ridge. Walking to the edge we were astounded to see an apparent rescue party. Providence surely." 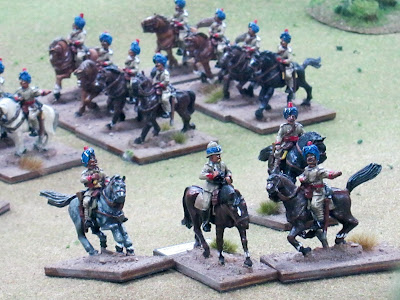 Lawford: "It was Colonel Coote's Guide's Cavalry Regiment. They spotted and escorted us down onto the plain. After exchanging pleasantries, we were fed, given horses and immediately departed back to civilization. Colonel Coote's orders were to find survivors of my expedition, if any, and immediately return to our base at Dongolo without delay." 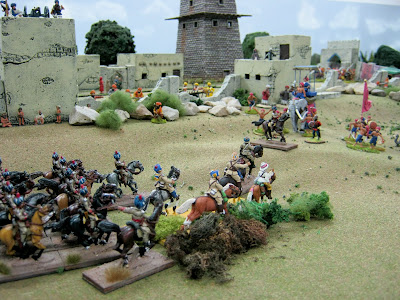 Lawford: "A near forced march brought us to the outskirts of Dongolo in early May." 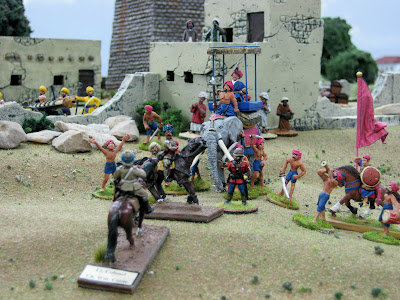 Lawford: "Local dignitaries and the Britannian officer on duty at the north gate greeted us. He also brought impossibly superb news." 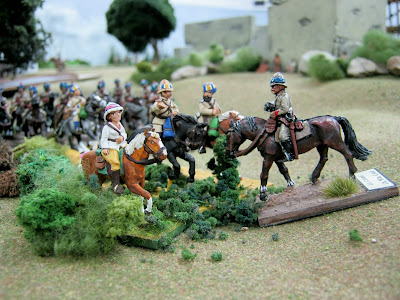 Col. Coote: "My dear Countess. I have the honour to say your Uncle Villainovich, thought dead in the attack on your camp at Alexandrapour has returned alive. He awaits you on the other side of the river."

"#2: Mine which pursued the Romanovs to ascertain if Alexandrapour existed and discover its significance. I later learned more than half my party lay buried in Terra Incognita"

"#3: Professor Grenvilles in league with the mysterious Keepers of Alexandrapour to prevent its discovery. We believed it utterly destroyed. A survivor of a much earlier expedition, a Professor Sutherland, had apparently succumbed to becoming a Keeper as well." 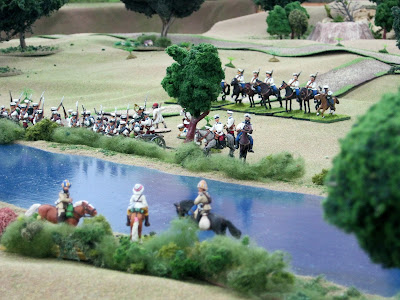 Lawford: "My batman Nazim and I took Alexandra to the river's edge. Captain Tumarkin (left) I knew escaped Terra Incognita. To his right was Colonel Villainovich thought dead. After escorting her across the river it only remained to report to our Consulate." 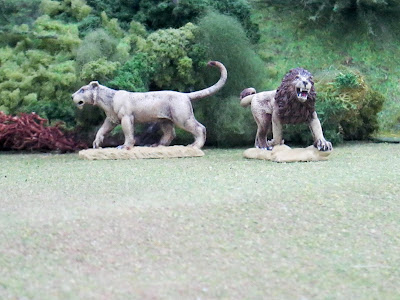 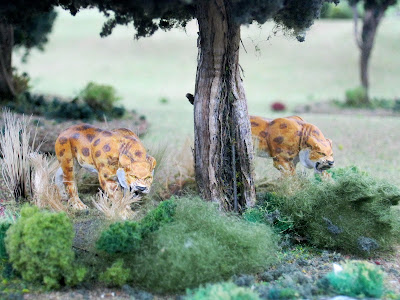 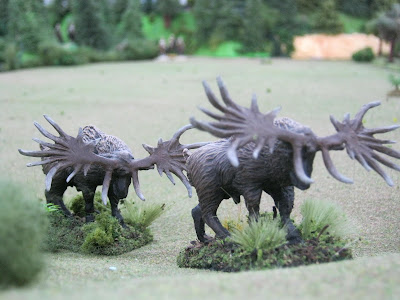 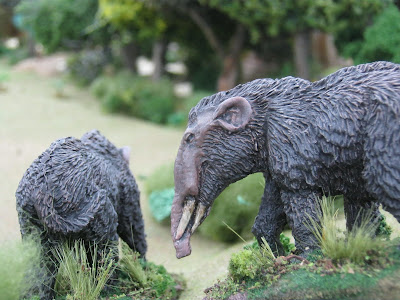 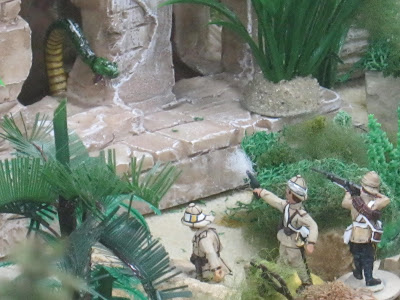 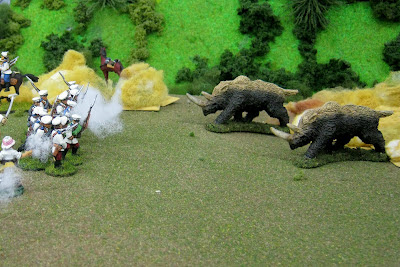 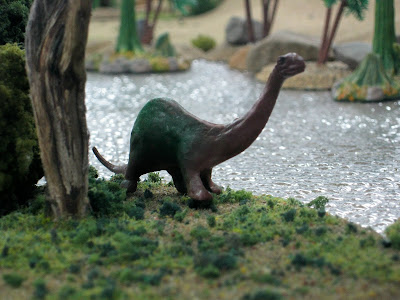 Our juvenile Mokele-mbembe.
"One that stops the flow of rivers."
May still reside in the Congo and
was apparently seen in the Amazon in the previous century. 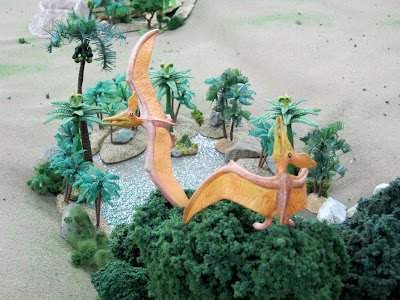 Pterosaurs (Some think they still reside in New Guinea) 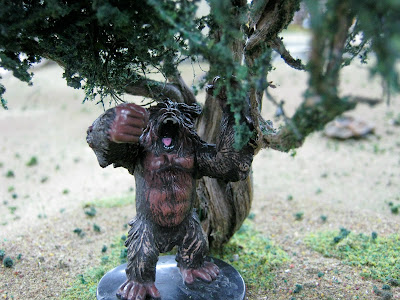 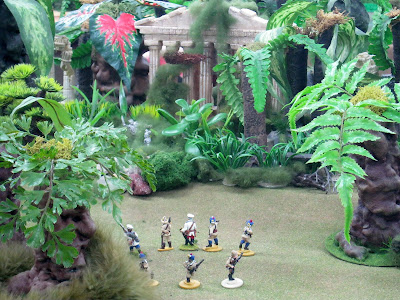 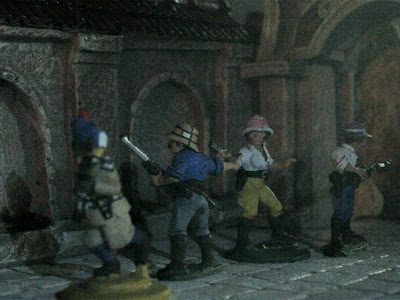 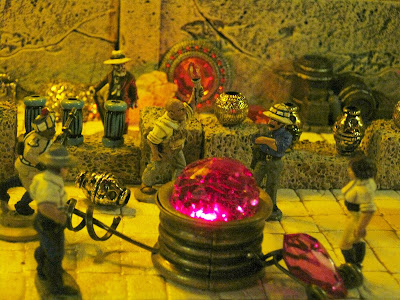 OUR CAST OF CHARACTERS 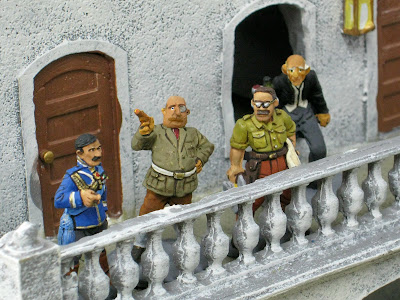 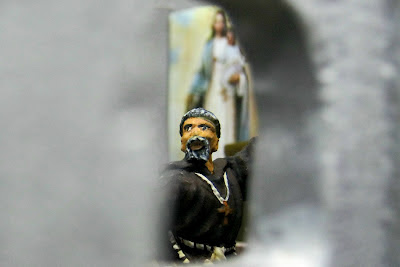 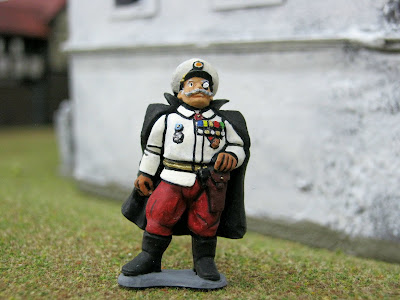 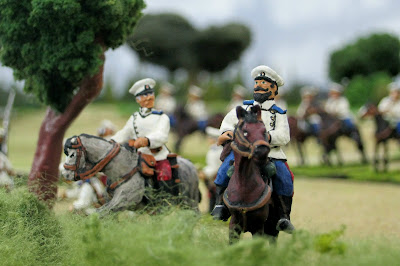 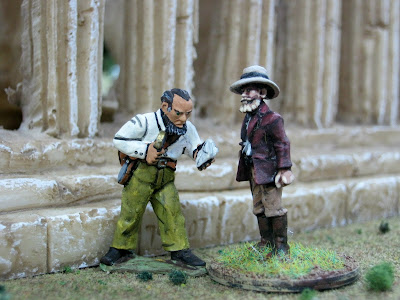 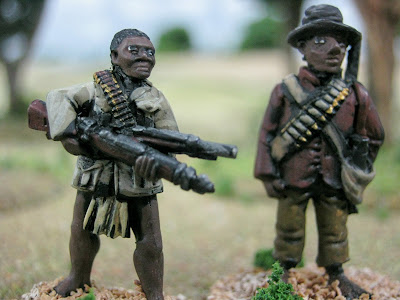 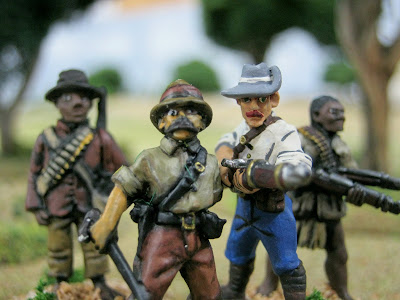 AND OUR
CELEBRATED HEROES!! 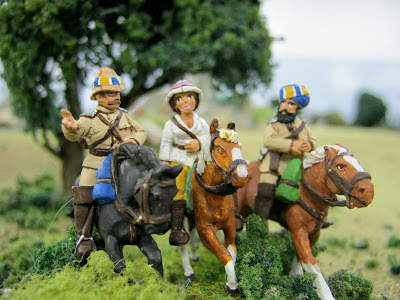 Lt. Colonel James Lawford, 9th Bengal Lancers and commander of the Britannian Expedition To Alexandrapour. "It will be for future expeditions and generations to safely rediscover the secrets of the lost ancient city of Alexandrapour."

Countess Alexandra Elaina Volkanskaya, joint leader of The Romanov Expedition To Alexandrapour. "Ve' alone saw Alexandrapour's historic significance and its utterly dangerous secret. Current machinery needed to open a way into the underground city could do it with years of labor. However, I doubt Terra Incognita will allow it."

Nazim, 9th Bengal Lancers Sowar and Lawford's loyal batman. At the end Nazim brought the Guides Cavalry Regiment to the rescue. "Terra Incognita was a terrible and intoxicating region. I would appreciate the honour and opportunity to return but we are returning immediately to Britannia to report. Afterwards I would not be surprised by rest and a wedding in St. Petersburg."

This is the end of Expedition To Alexandrapour. Thank you for your support, interest, enthusiasm, assistance and kind remarks. I especially want to sincerely thank my friends who donated collections, time and ideas to produce this Adventure Blog Story.

We may return to Terra Incognita someday.
I hope you will join me, if we do.

I am respectfully your Obedient Servant,
Bill Protz
6 January 2013

Bill, this has been a splendid tale of derring do and romance. I appreciate the drawing of things to a close by this final post which rounds off so much of the story. I do like the great prehistoric beasts so much more than dinosaurs. If there is a wedding in St Petersburg will we get an invite to see the photographs?

Thank you for sharing this wonderfully illustrated and illustrious adventure serial with us!

Expedition to Alexandrapour was a gratifying and fun experience. It grew with time and as collections changed; (mine and others)

Creating a captioned photo serial story using miniatures and narrative satisfied a personal goal to write an adventure story without writing a book. I'd like to write a book but time and circumstance elude me. ETA also offered an opportunity for personal growth and development.

It also helped that multiple manufacturers often had similarly garbed personalities so Col. Lawford, Countess Alexandra and others could change poses and attitude.

Your interest and support in the audience were vitally significant. Thank you sincerely for your remarks for the past eighteen months here and on TMP.

General Pettygree's Surajistan Field Force has awakened and is on the march to The Secret Valley to engage the Tugs.

The last posting was in October 2011. That story paused deferring to Expedition to Alexandrapour till now.

I'm also pondering a next adventure story. Who knows?

A standing ovation for the cast and crew of this epic tale and especially for the creator and director.

Thank you for the entertainment and the stimulation.
-Ross

(throwing flowers onstage and loudly applauding!)
As the lights come up, and the Safety Curtain drops for the final time, after the last echos of the rapturous applause dies away in the vaulted ceiling of the theatre, we, your avid audience, sit quietly in our seats, taking in the reality... "It's over" said one, "Oh, goodness, it's finished!" said another. I just look again at the photos of the production in my brochure, and savour a few more moments before the theatre manager tells me I really must be going now...
But I can hardly believe that for 12 months you've kept us *so* entertained, but now the last curtain call has finished... Will we ever be so transfixed again? Will we see pictures of the much-expected wedding in St Petersburg which, at least, will satisfy us that all's well that ends well?

Thank you, Bill, and all your team of friends for this wonderful adventure blog! I do, so, look forward to another, soon!
Squibzy