Colonel Chartwell's personal report about my former command in Surajistan had been a courtesy to stifle inevitable newspaper imperfections and obfuscations I might read. "Horse Guards want you to hear it right." he had said. That was ten days ago.

My old nemesis, The Guru and his Thugee followers, had revived, broken the Armistice and shockingly attacked Fort Grant. Colonel Smythe's men repelled a furious escalade suffering a cruel 25% loss. Further news never arrived because telegraph lines had been cut. The fate of my comrades remained unknown.

Mary's dread I would be ordered back to active duty subsided. Retired life therefore continued at Channelside House with our quiet walks, social calls and home restoration work until May 9th. when.... 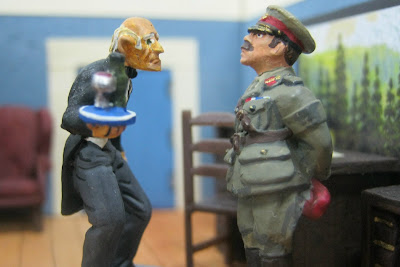 Jameson: "General, a prodigious gentleman has arrived apologizing he gave no advance notice. He says he must speak with you privately. Urgent he said. His bearing makes him a government man, unless I'm mistaken." 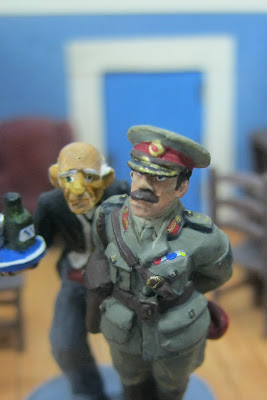 Jameson: "When I begged pardon inquiring after his name, all he said was MH." 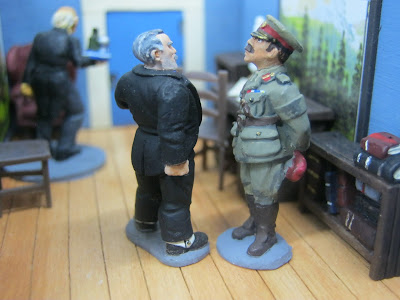 MH: "General Pettygree, I beg your pardon dropping in utterly unannounced. Monstrous breach of etiquette of me...."

Pettygree: "Well --- some excitement might be agreeable. May I ask your name sir?"

MH: "For the moment my name must remain undisclosed. May it suffice to say I am a special adviser to the Prime Minister? You may inquire with Colonel Chartwell as to the validity of my claim."

Pettygree: "Irregular I dare say. How may I be of service to you? Trouble I assume." 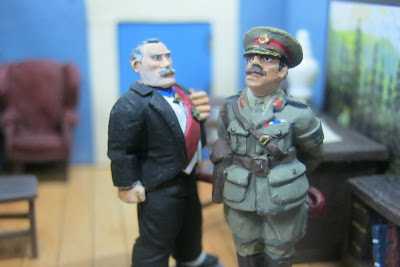 MH: "Of the worst sort. The meat of it is General, the bloody business concluded in the south of Africa has convinced our enemies we are in decline and weak. The Kaiser perceives this as a singular opportunity for expansion and mischief from Africa into the Pacific. Even the Sudan is again aflame with a Dervish revival near Port Suakin and....you know Chartwell's report about Fort Grant. There is more...." 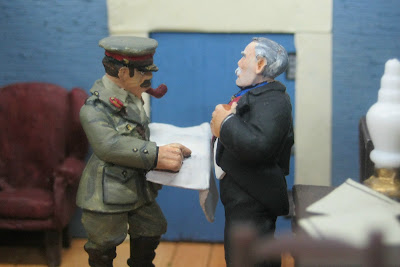 MH: "I've brought a map to show you. Fort Grant, Surajistan and most Frontier provinces have been lost. A sub-continental uprising is feared threatening northern India. You kept the Guru in check forcing him to sign the Armistice. When you were recalled and our garrisons reduced, he commenced renewal of his malevolent schemes. Multitudes joined him. You were the only deterrent that kept him in check."

Pettygree: "My men kept him in check sir. In the end we had insufficient numbers to knock The Guru on his head once and for all. Two more brigades and we would have finished the job. You may tell that to the PM!

MH: "We know General. --- The PM and even His Majesty request your return to India. You will have those two extra brigades." 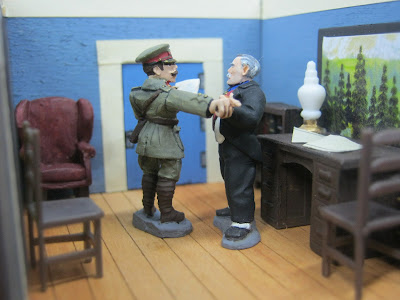 Pettygree: "If I agree to go back, there must be no dithering or interference by the government. Men, supplies, money - all of it - must be more than ample lest this trouble further embarrasses the Empire."

MH: "Indeed and in fact you will have it all." 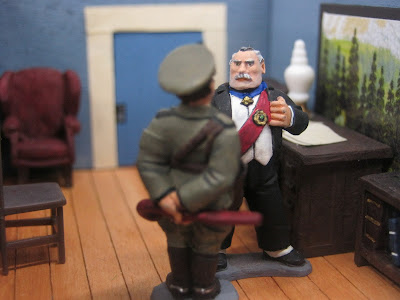 MH: "Your return must be kept secret lest the Guru intensifies his efforts making matters worse than they are. We'll cover your return sending you with your lovely wife at first ---- to Cairo to analyse the situation in the Sudan. We don't expect much trouble from the Dervish revival but an experienced hand needs to make sure of it, eh?"

"From there you will secretly depart for Bombay. Meanwhile reports will be made on your behalf about conditions in Egypt and the Sudan. The newspapers will think you are still there." 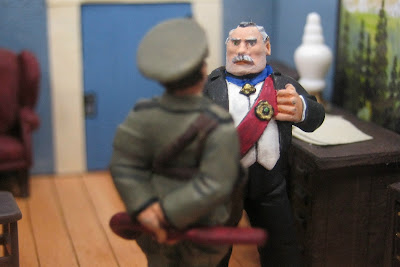 MH: "One last thing General. A relative of mine whose powers of deduction are of the first order and with whom the government has had occasion to secretly employ creditably believes you and Mrs. Pettygree are in grave danger. I confess his findings appear worthy of your consideration."

"In view of the important role I anticipate you will accept, I have therefore taken another liberty. I've asked him to explain everything and offer his protective services until you depart for Egypt. He will be here tomorrow."

"Will you do your duty General?"

Pettygree: "Yes. Per angusta ad augusta. Through difficulties to honours." 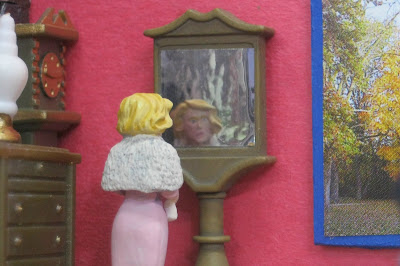 Mary Pettygree: "William, what did the gentleman say to you?" 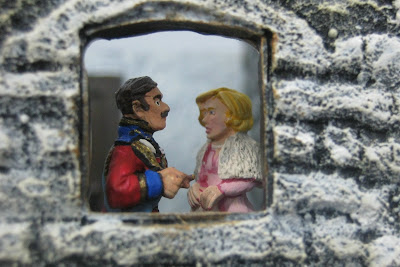 Pettygree: "There is in trouble from Africa into Pacific Oceania. The Kaiser is taking liberties, there is an insignificant Dervish revival in The Sudan and he added to Chartwell's report about Surajistan."

Mary: "Are you recalled to duty William?"

Pettygree: "I am --- with you dear. How would you like a holiday in Egypt?"

Mary: "Your duty is mine too William. Yes of course. When do we leave?" 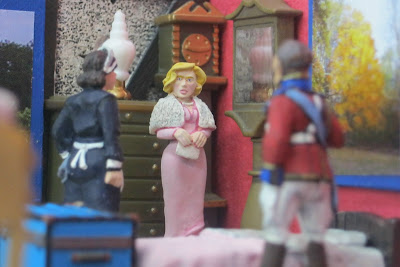 Mary: "General Pettygree and I are leaving for Egypt in two days."

Mary: Whilst we are out tonight, please start packing. 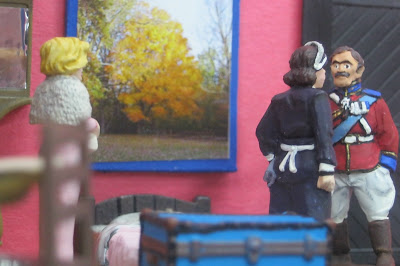 Pettygree: "Anna, please see that my luggage is brought upstairs." 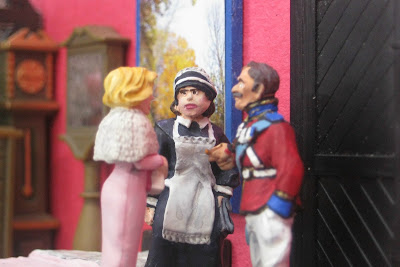 Mary: "Anna, I will be lost without you. Will you come along?"

Anna: "I will. Thank you mum. I've only dreamed of Egypt, the pyramids, Cairo and the Nile."

Pettygree: "Splendid. The hansom taking us to the Flint's dinner party should arrive any moment. We will return before eleven. Tell Jameson will you, to prepare for a house guest tomorrow." 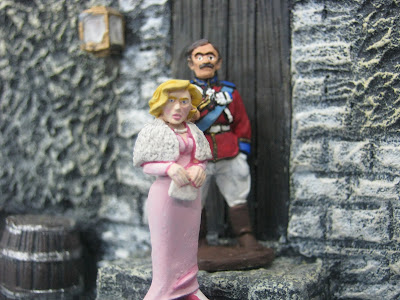 Whilst waiting for the hansom cab.... 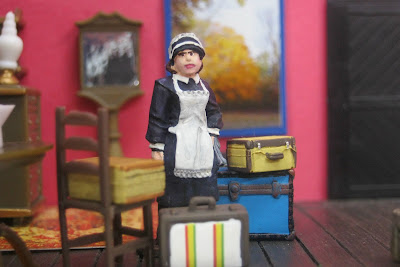 Anna brought in some of Mary's luggage. 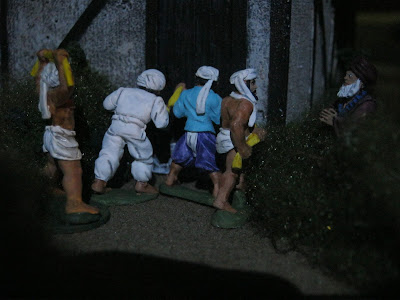 Whilst the entire household was asleep, uninvited guests arrived.... 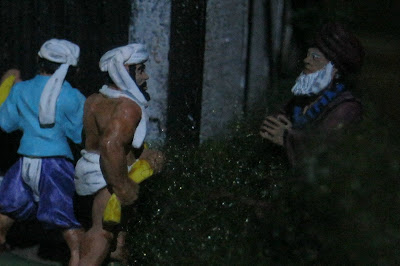 1) Thank you for looking in. It is good to be back producing, writing and directing the story of General Pettygree!

3) Your remarks will be posted after review solely because an anonymous spammer has sought to place hundreds of irrelevant posts here. General Pettygree will never allow those.

I know that "mum" is the word, but it will be good to see you again. Col. Coote

I'm pleased to see you back in action. Must say MH is a little thinner than I thought of him.

Glad to hear from the General.

Good to see the General has returned. A thrilling start...

Will we see MH's illustrious "relative" shortly? Has the good Dr. Watson been posted home?

joppy, I found MH greyerthan I expected, but otherwise felt he fit the part. Though I find the BBC reimaging of him more to the taste than some of the descriptions in other media.

One wonders just what other brigades Genr'l Pettygree will have at his disposal.

It's not just Fort Grant that needs relief. The boredom this summer has nearly consumed me, sir (faints dead away). So glad you've come to the rescue with your thrilling tales and magnificent miniatures. You're a blessing, you are.

Well worth the wait!

Magnificent. Will there be a Blue Ray Directors Cut edition soon?

Magnificent. I love the way you've used several figures to depict the General moving around his house. Looking froward to seeing what's next!

A quality intro into what will surely be a splendid new chapter in Pettygree's adventures!

Sirs,
---
Your remarks make my day! It is really gratifying to read your kind comments and thoughts. Thanks a million for taking the time to chat and for your support!
---
Respectfully,
Bill

Simply Outstanding!!! Good to know you are a Christian as well. That makes us brothers my friend.
Jeff

Bill, you have again achieved the goal of any pulp/serial writer...you have the audience champing at the bit, wanting more....NOW!

Another fine start to these wonderful sagas!

At last! I'm *so* pleased to see the good General being cantered out again, along the training ride, to get back into fitness for his next campaign! Mind you, if those infernal Thuggees at his back door get in tonight and accost Anna or Jameson... and then lay in wait for Mary and the General to return home...

Let's hope the "MH" and his trusty "relative" appear *before* the morning light!!
Squibzy

My dear Squibzy, Steve and Chasseur et al,
---
I am so very pleased and grateful with your and everyone's interest and tension. The next chapter is photographed and if I am lucky, it will be posted within days of this memo.
Respectfully,
Bill

>>The next chapter is photographed and if I am lucky, it will be posted within days of this memo.>>