Chapter 70: Marching Through Antiquity in The Delta


FROM THE JOURNAL OF
MAJOR GENERAL WILLIAM AUGUSTUS PETTYGREE 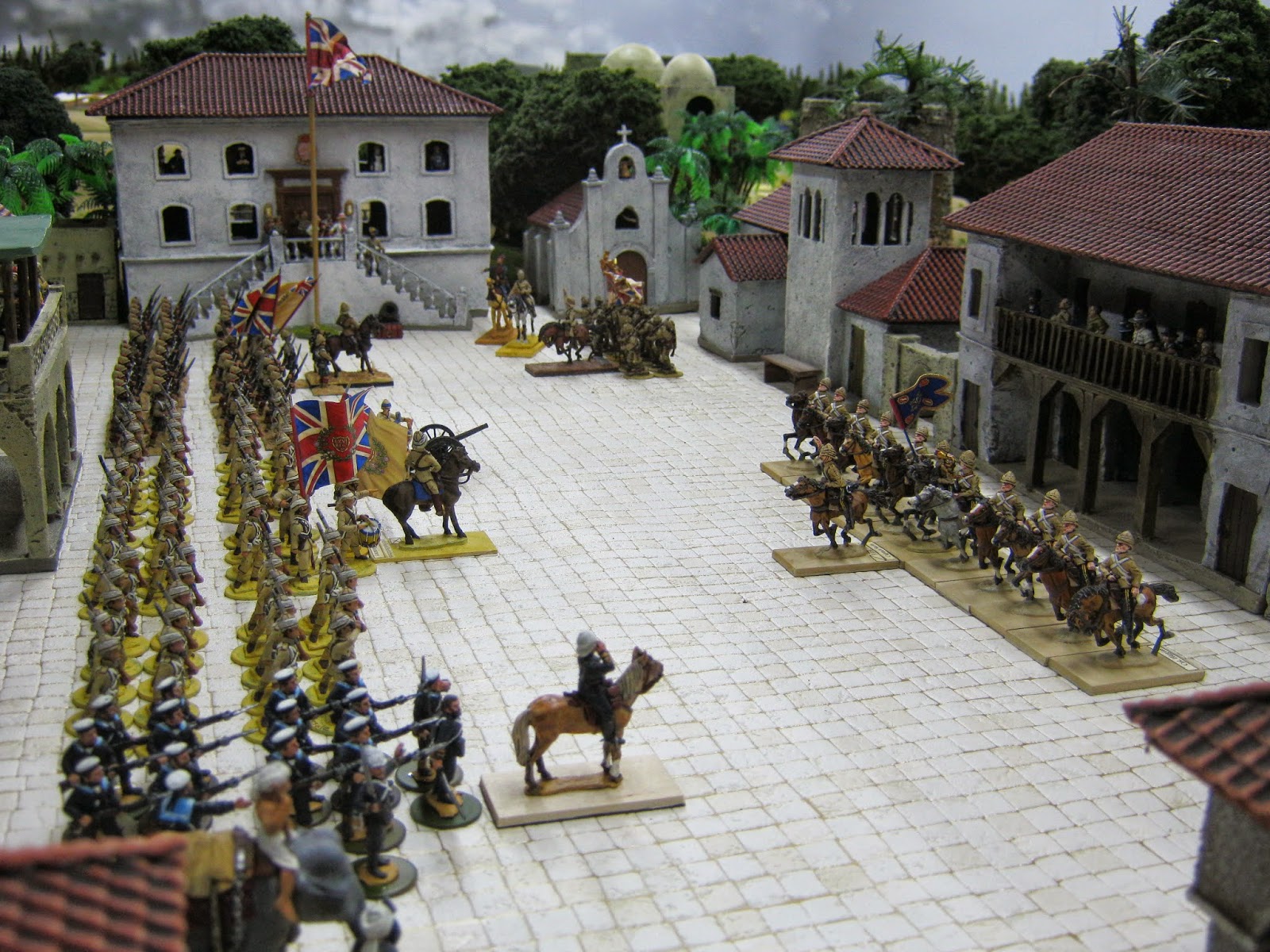 Pettygree:  "On the 27th of May 1903 I ordered the Garrison of Alexandria to assemble on Parade to begin our march south through The Nile Delta. We would pick up additional battalions, squadrons and guns en-route." 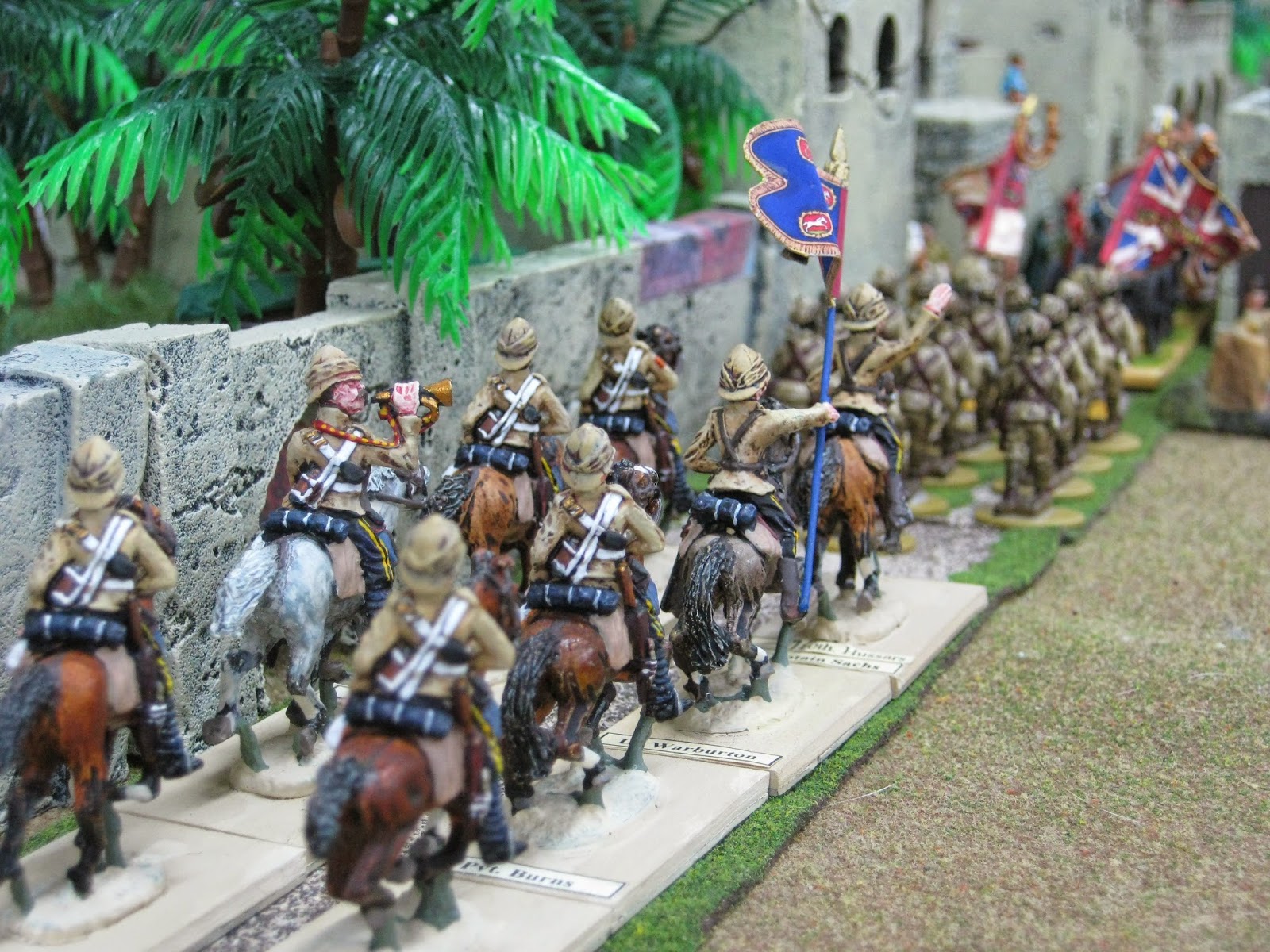 "My purpose was to demonstrate in an extraordinary way to all Egypt and The Soudan that we were unsheathing our sword again. The siege shutting up Brigadier Kettering in Khartoum had to be broken. I hoped my earlier tincture of obfuscation would persuade foes possessing superstitious natures to abandon their cause before a battle might be fought." 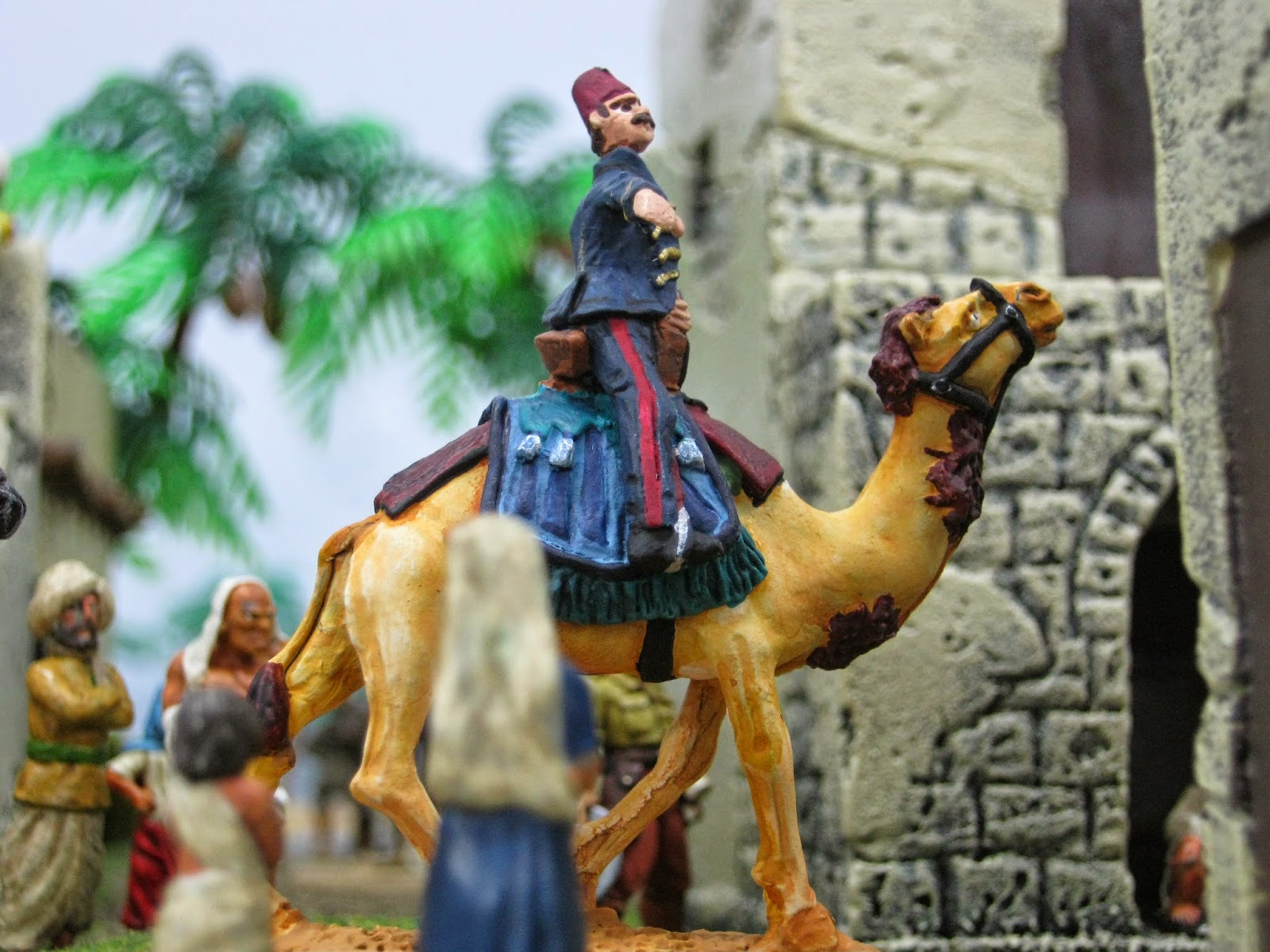 "My ruse was the impossible reappearance of the late General Charles Gordon whom fathers of the same warriors now outside Khartoum had killed in 1885. Any number might abandon the siege in fear." 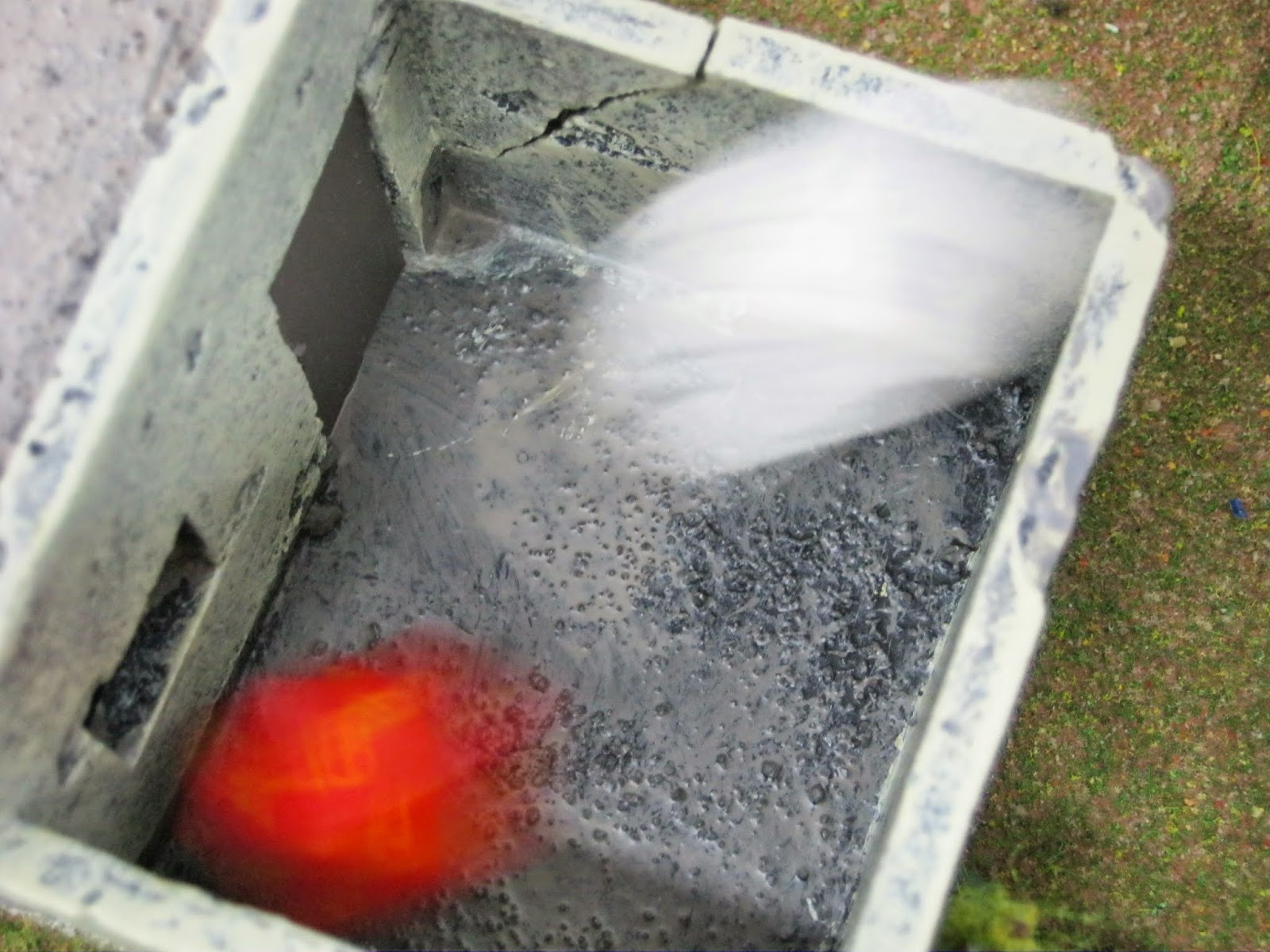 "Therefore, I cast the dice hoping a prodigious percentage of the enemy would be thrown into frightened confusion thinking it impossible to defeat the supernatural. A long shot? Yes. However, it had the merit of being so unusual that it might work." 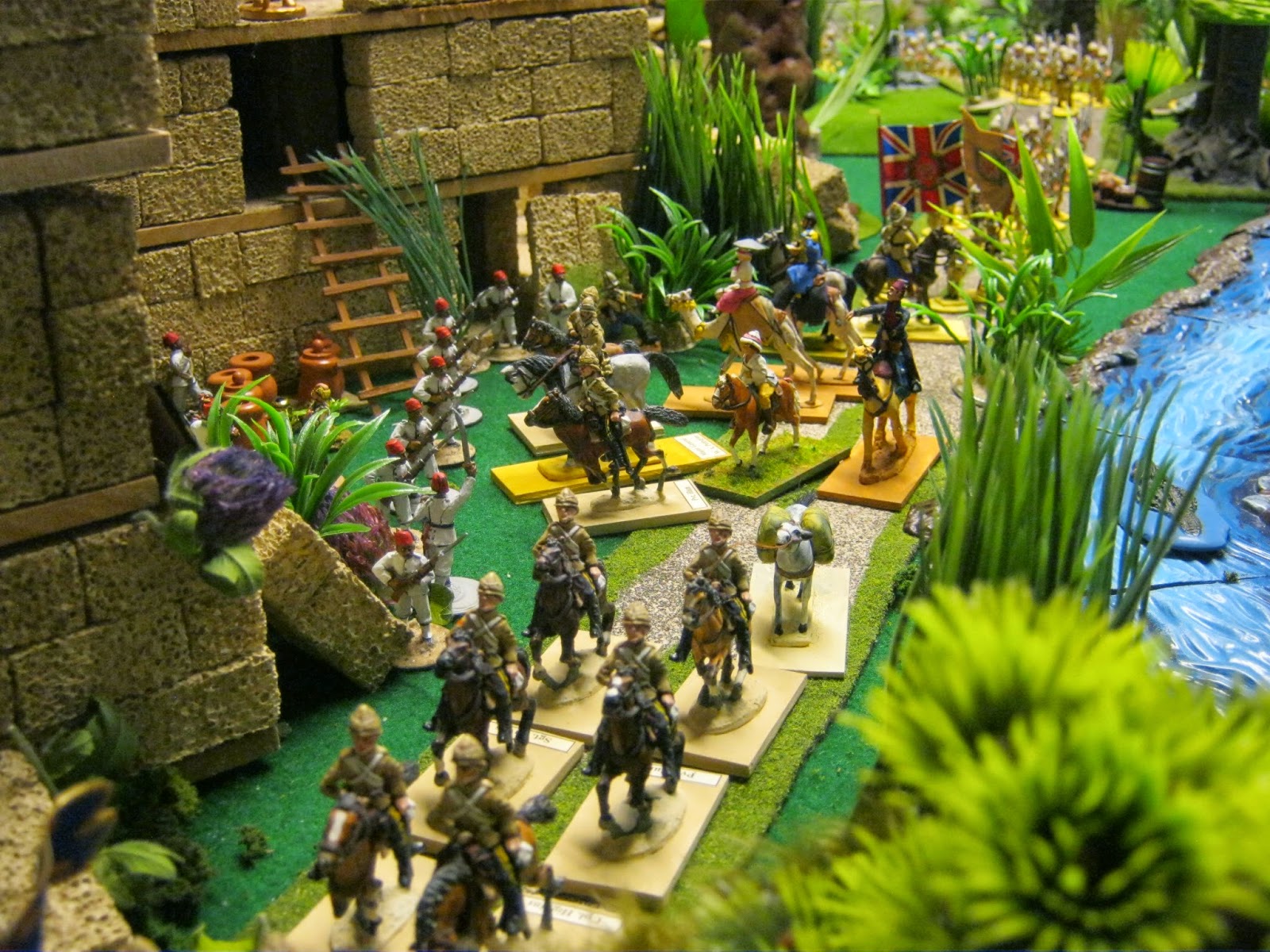 "On the 29th instant we made the most of my legerdemain. Beside one of the many Nile Delta tributaries sat a large structure from the time of the Ptolemies." "I turned my companions toward the magnificent complex to make inquiries and ask permission to investigate. My dear wife Mary after all had been promised a Grand Tour including all manner of ancient Egyptian buildings we might come across. This was another opportunity to satisfy that promise to her." 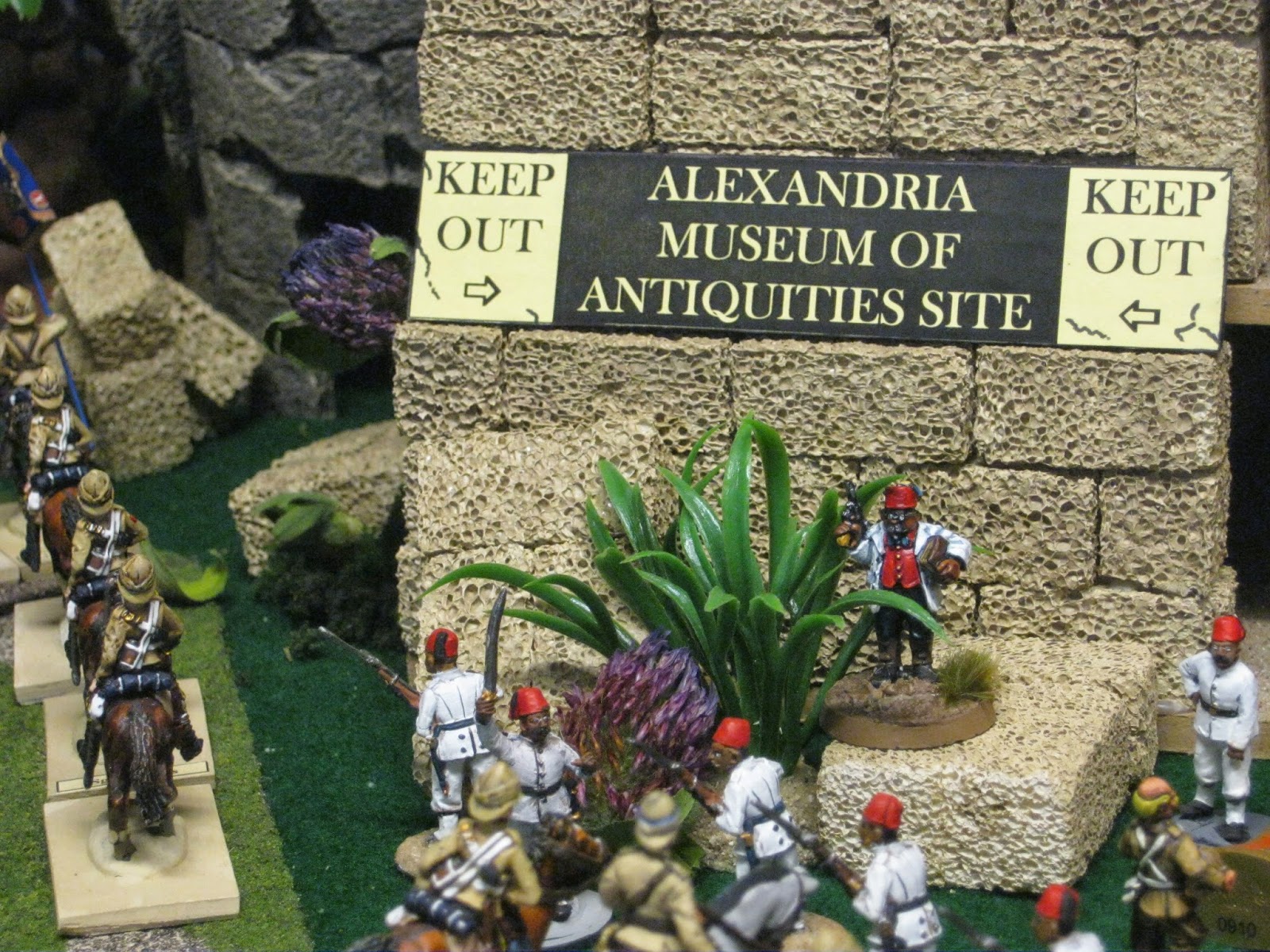 "However, the Curator Mr. Ibrahim Fakhouri was adamant we must not enter his proceedings. "Too fragile he pleaded and dangerous." 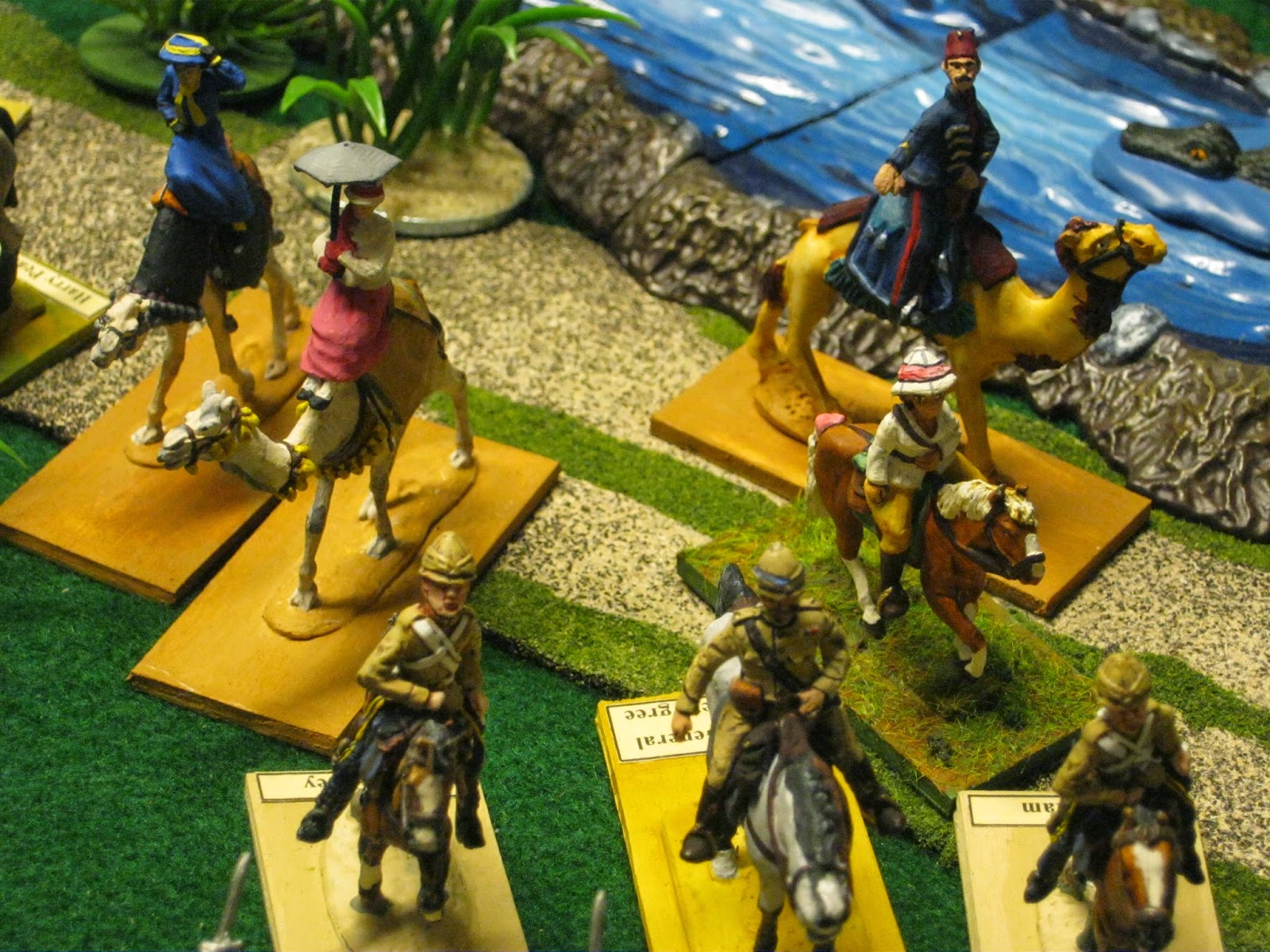 "Next arguments did not turn away his decision. "No," he did not care my lovely wife and her companions including -- Gordon -- Pasha? -- would be distraught."

"Would a mere hour to reveal ancient wonders be possible? Never in life. An impossible interruption and inconvenience it would be."

"And so it went on until my design had been achieved. The poor fellow looked for the longest time at the counterfeit Gordon as we departed. Tongues would wag I was sure. Mary, shaded under her bumbershoot atop her ship of the desert, smiled sweetly at me." 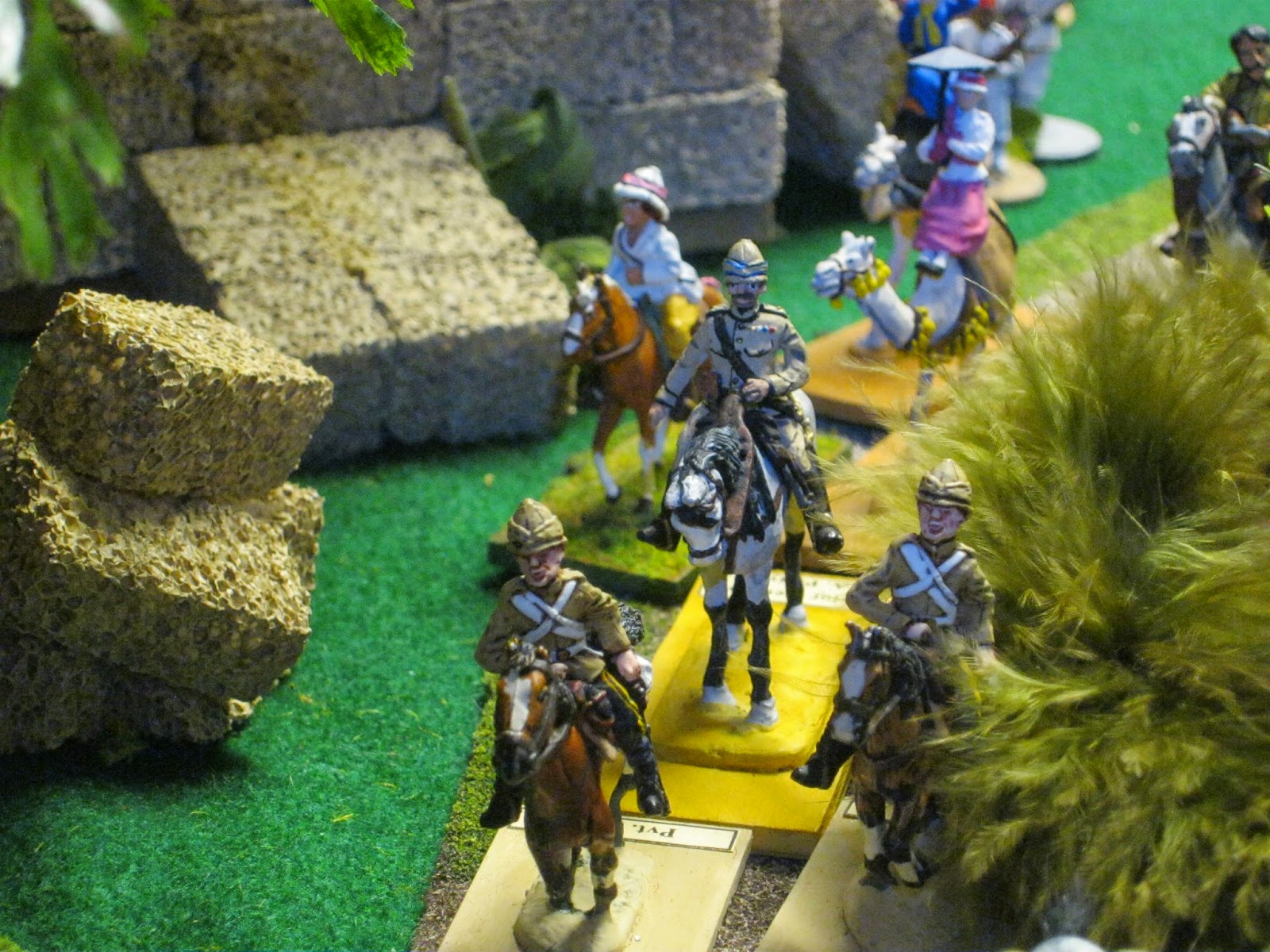 "We resumed the march." 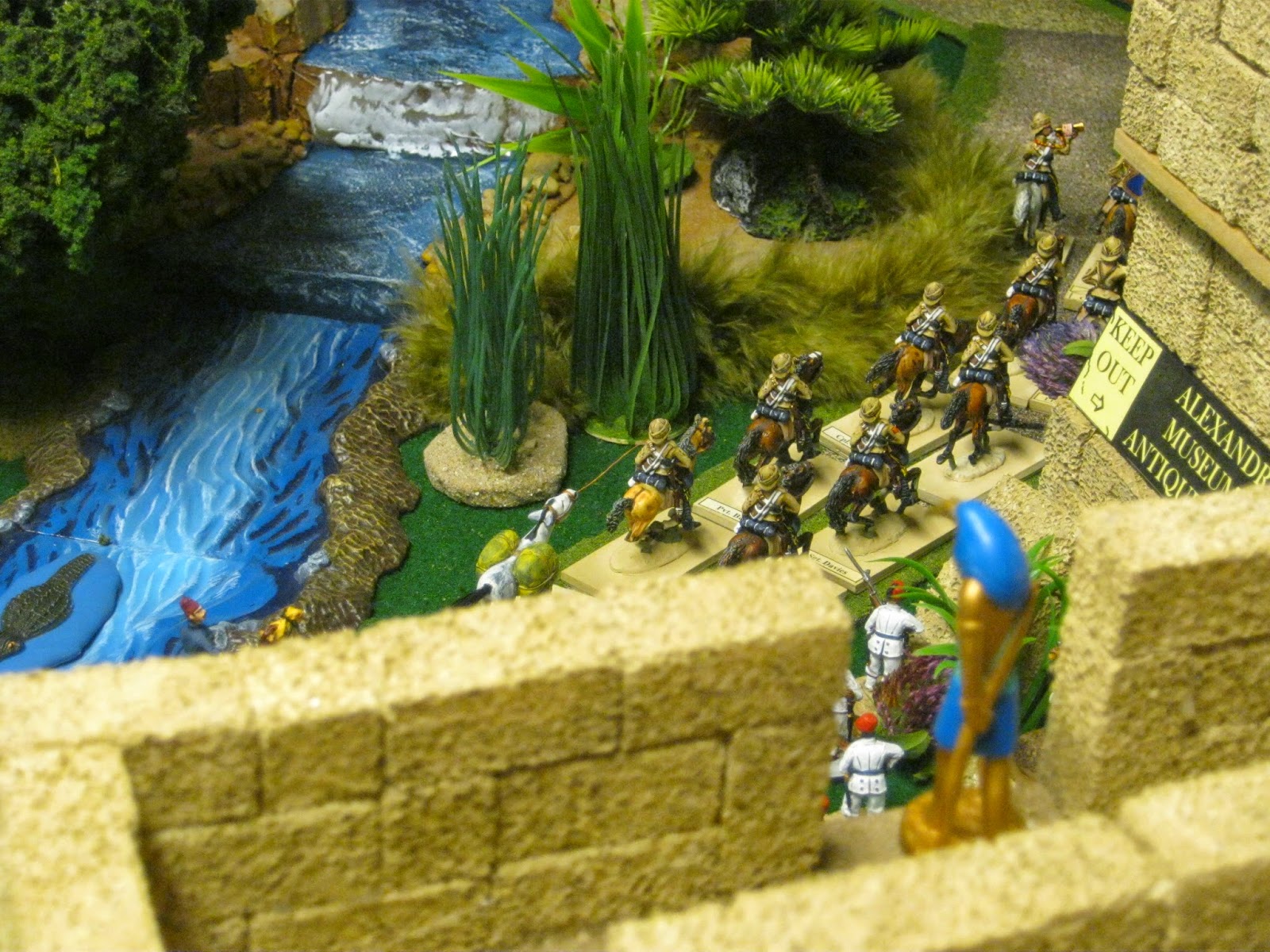 "Amused thinking even lifeless stone statues, observed us in bewilderment." 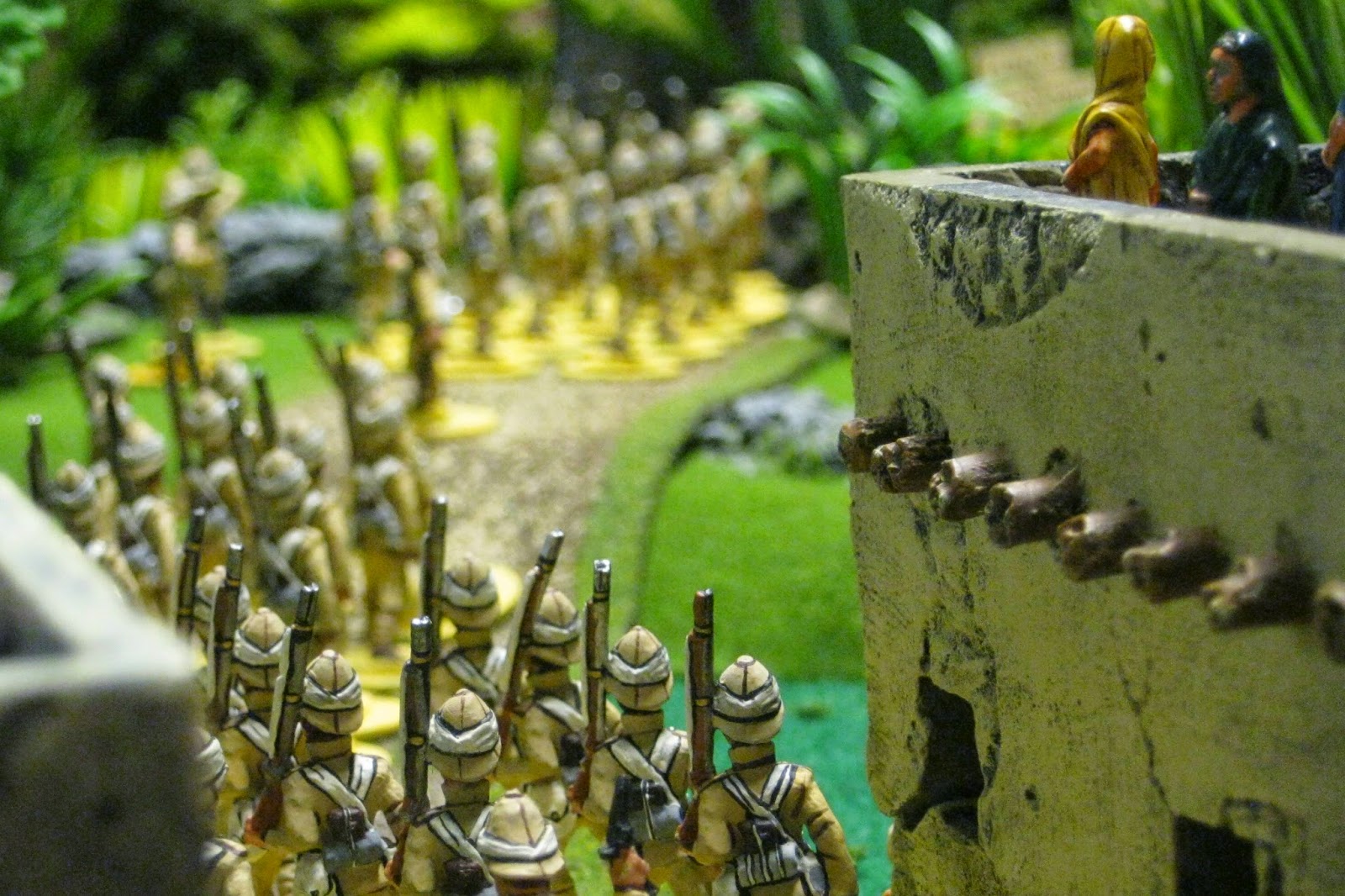 "Certainly women atop their homes would spread the news at wells and bazaars." 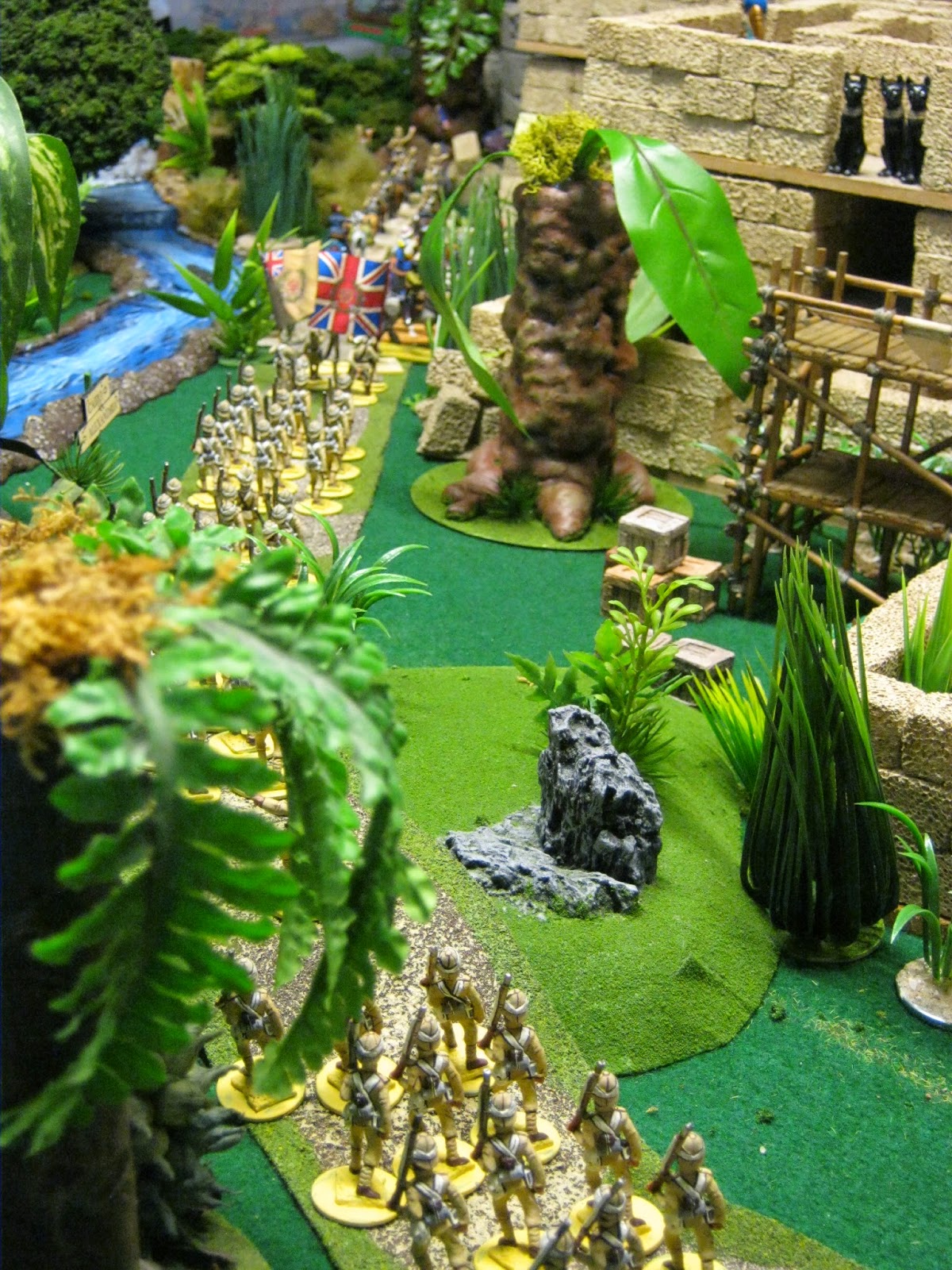 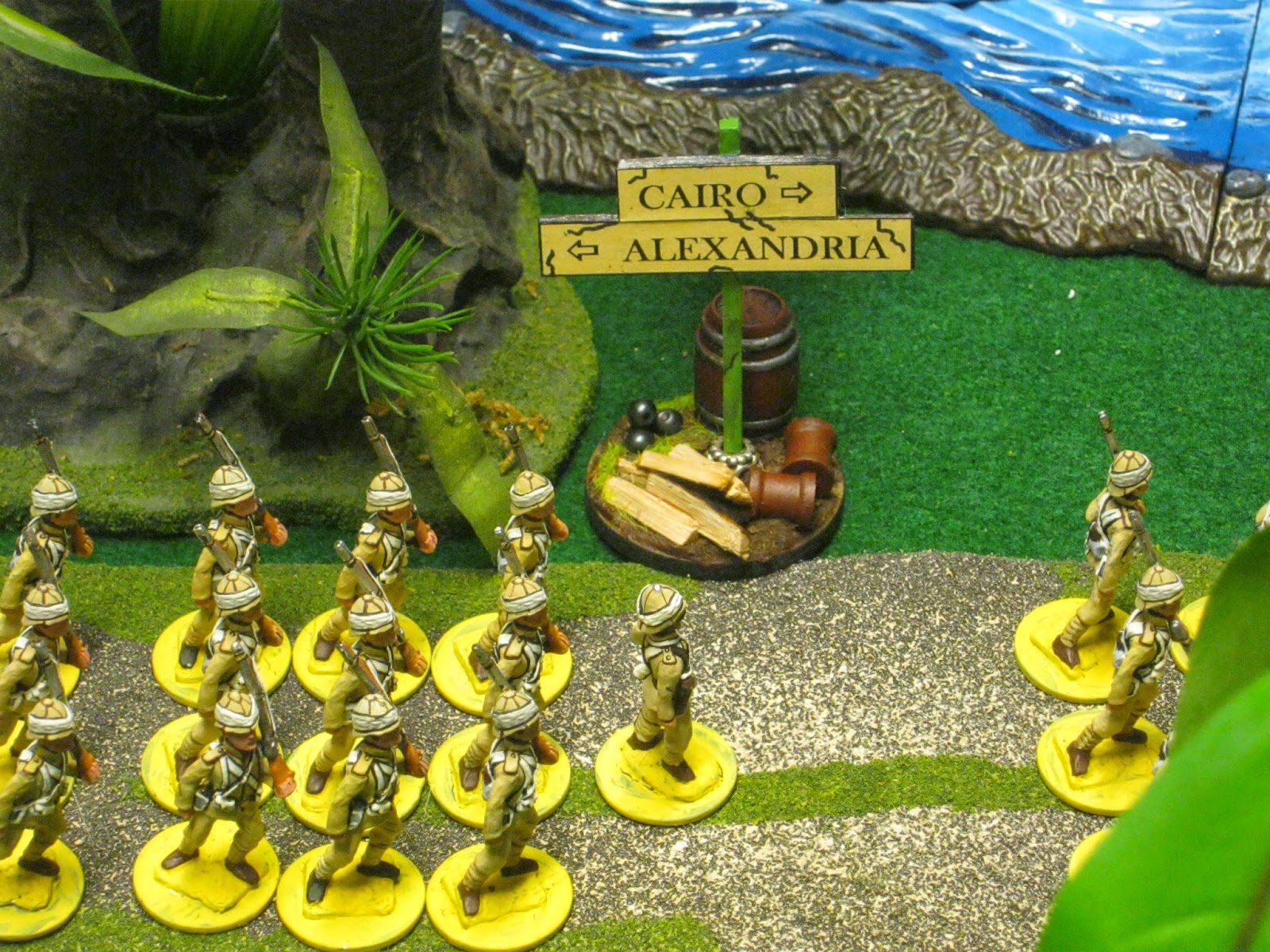 "Forward to Cairo, the Frontier and The Soudan." 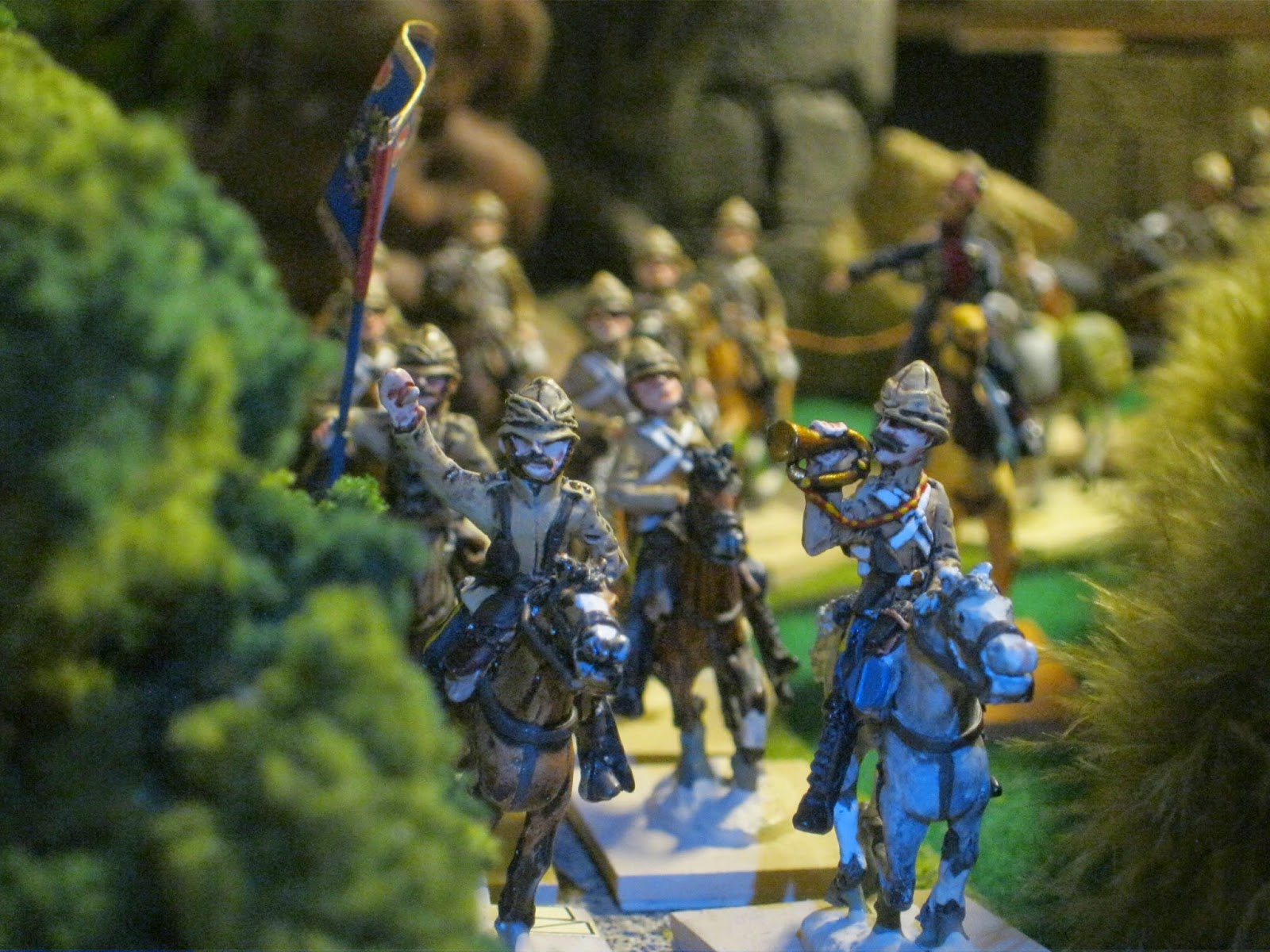 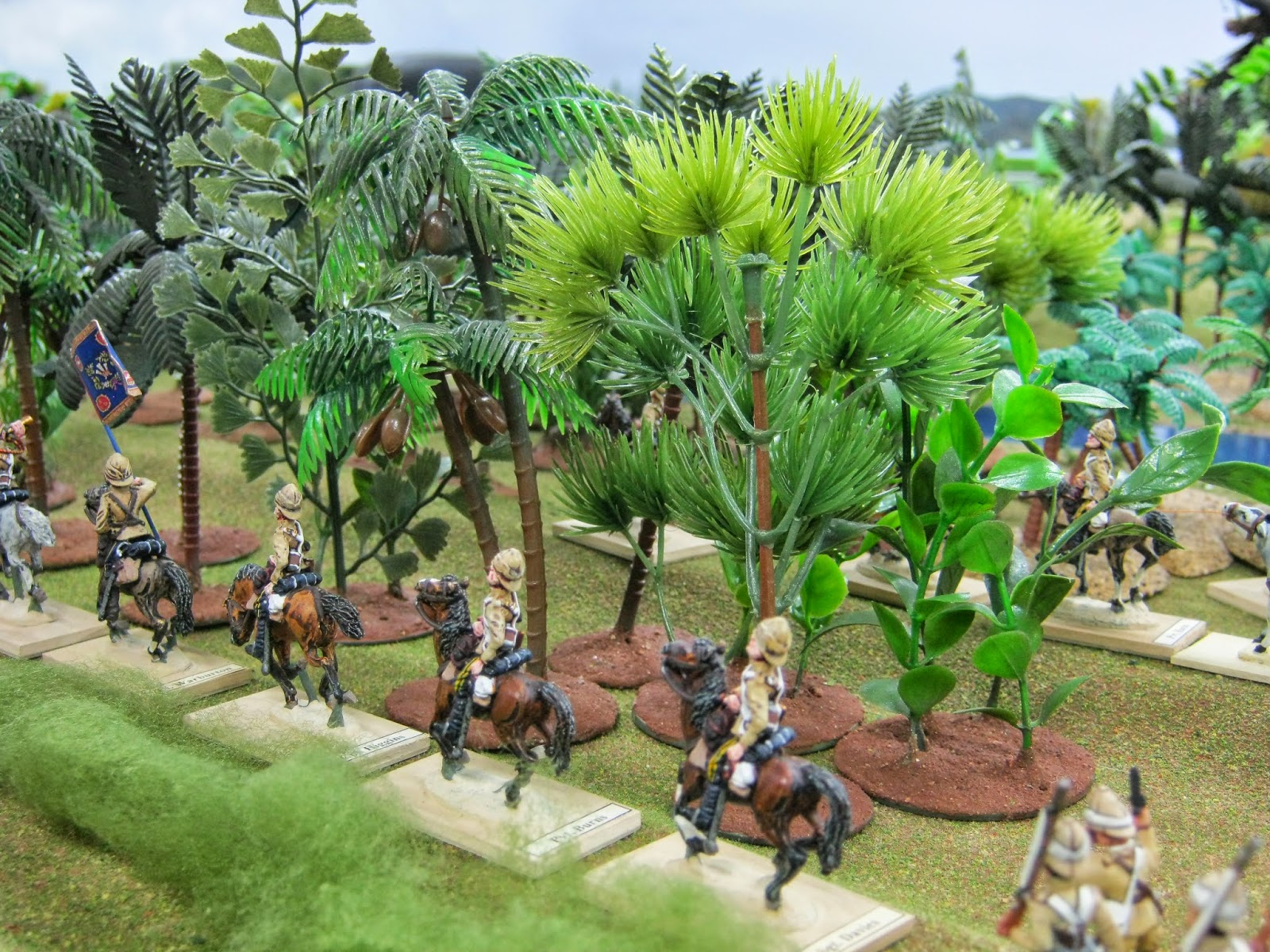 "The verdant Nile Delta was not the bleak and dry desert of The Soudan. It's greenery cheered us enormously. Cool shade was a welcomed blessing indeed." 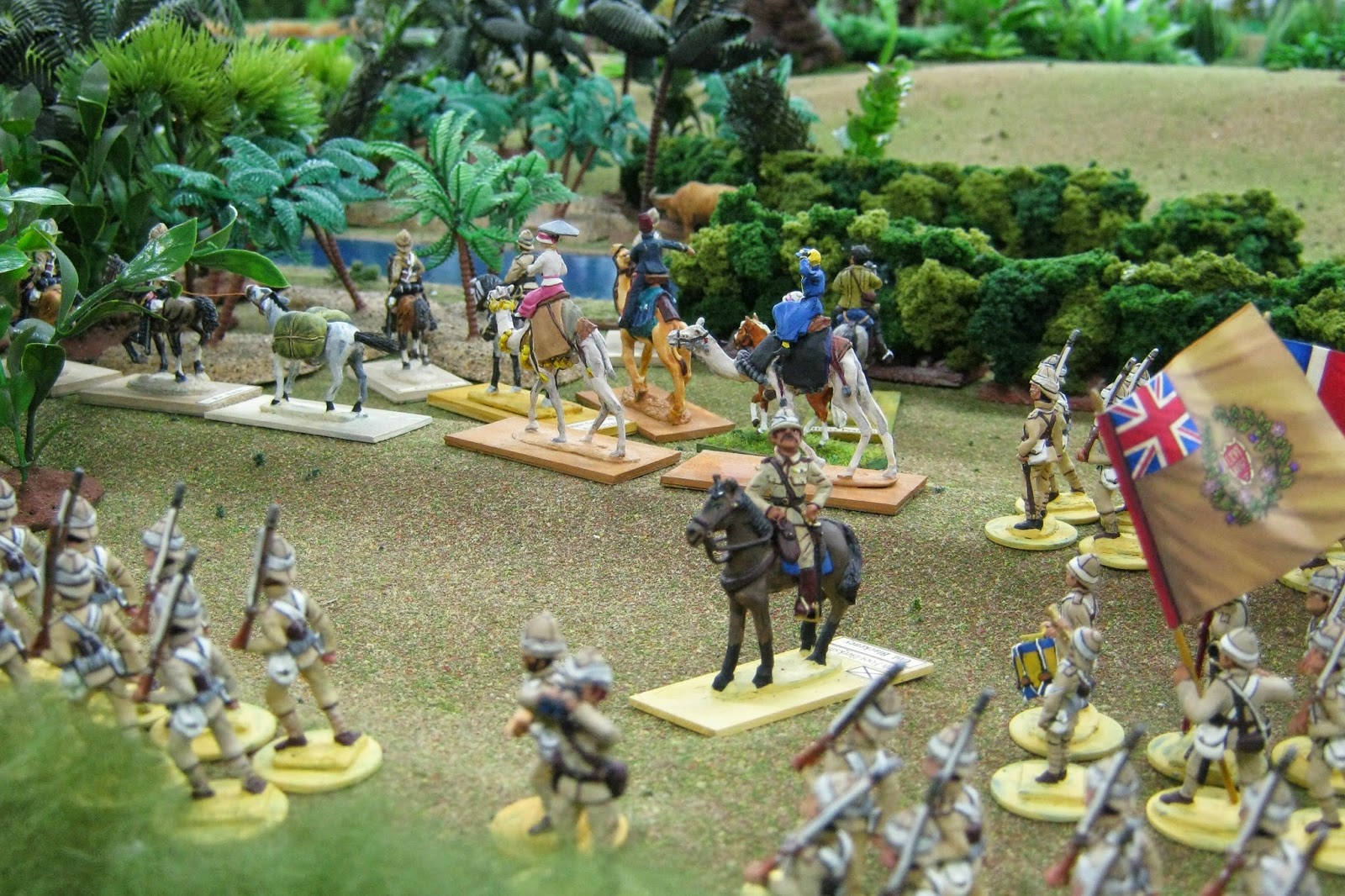 "A noise across a small stream attracted our attention. Colonel Buckingham halted the Berkshires 2/66th Foot while an investigation was made." 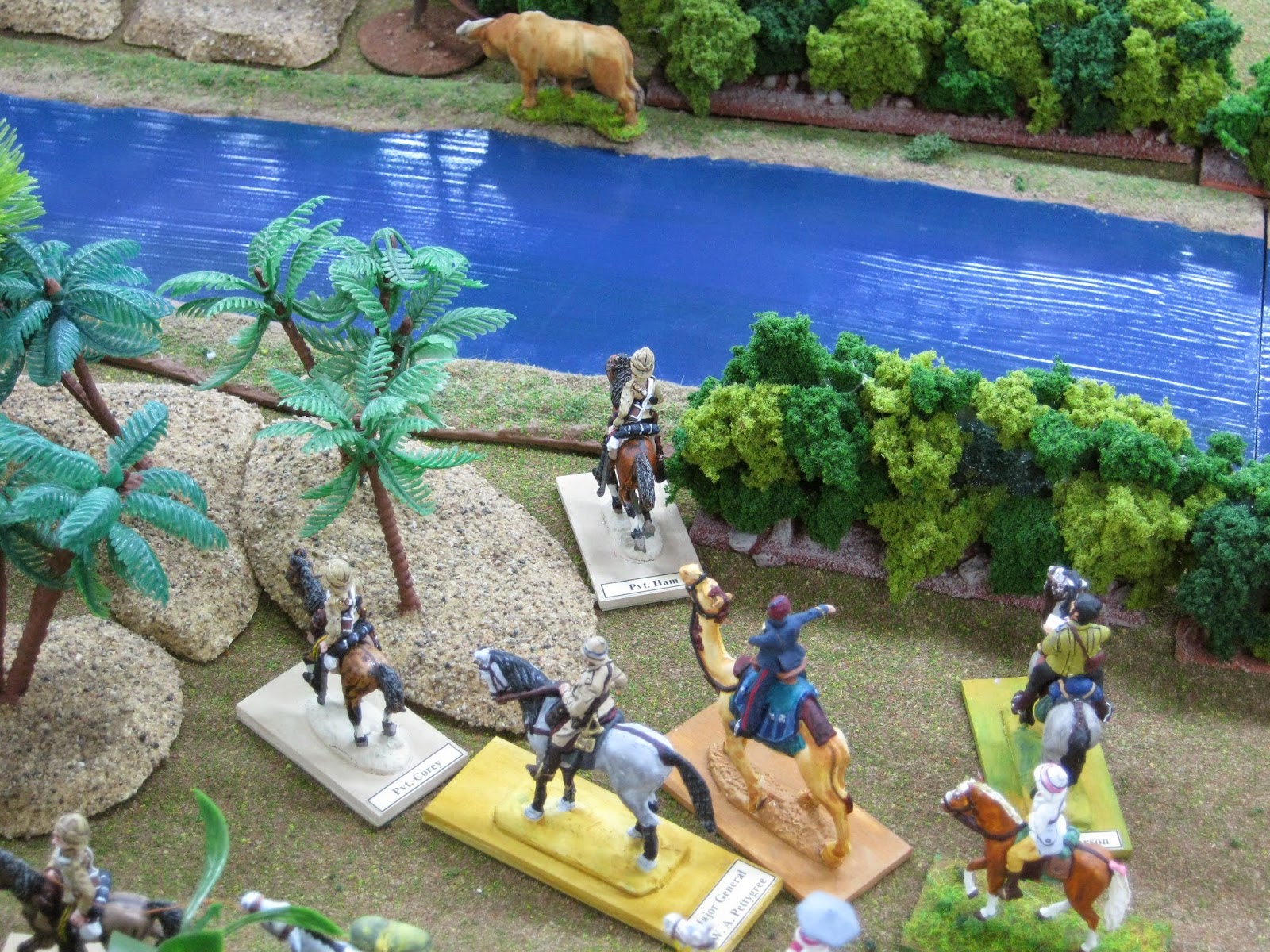 "Troopers Corey and Hamm rode to the bank to investigate." 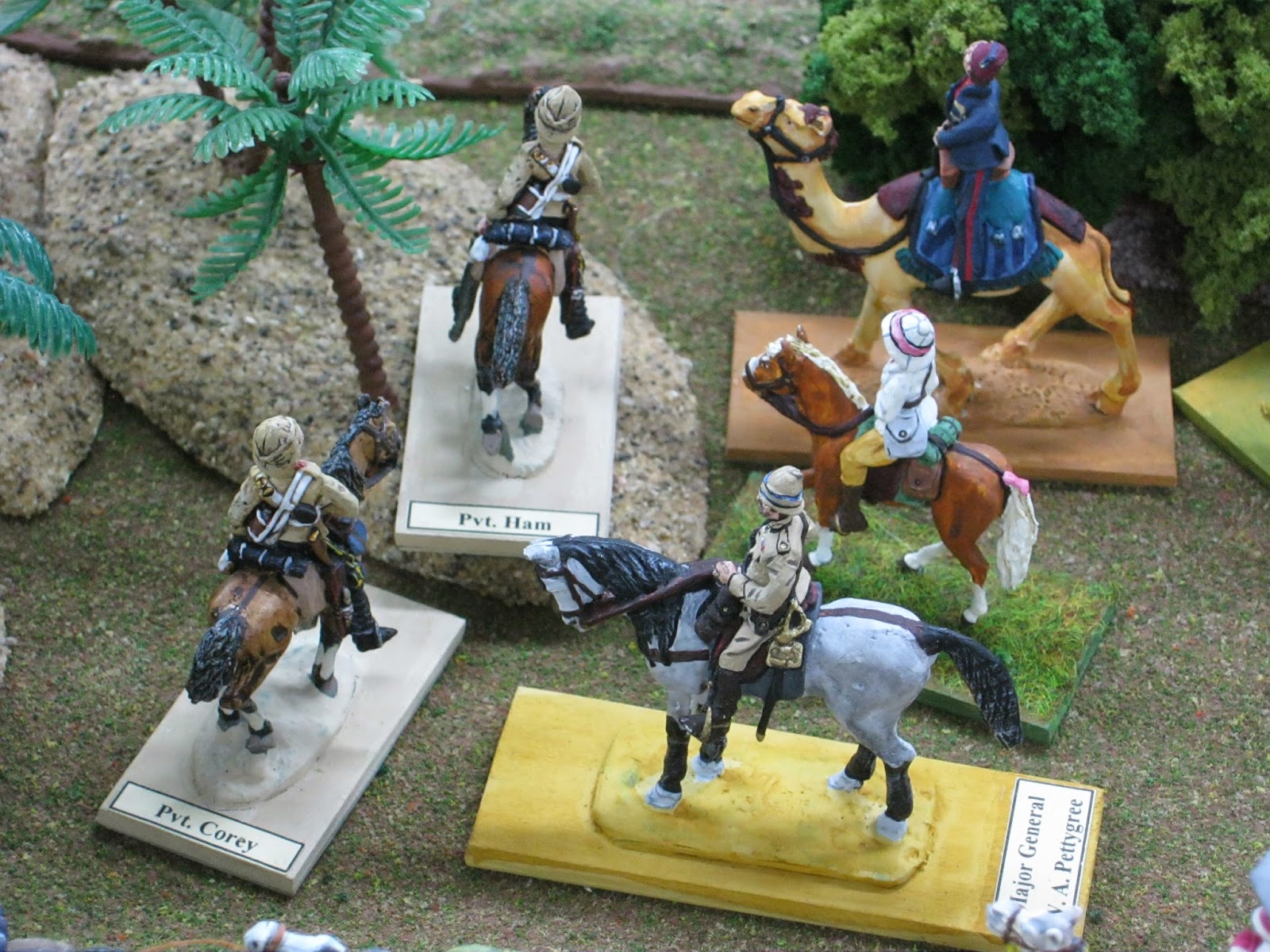 Corey: "Only a gentle bovine of some kind General. Nuth'n to worry about." 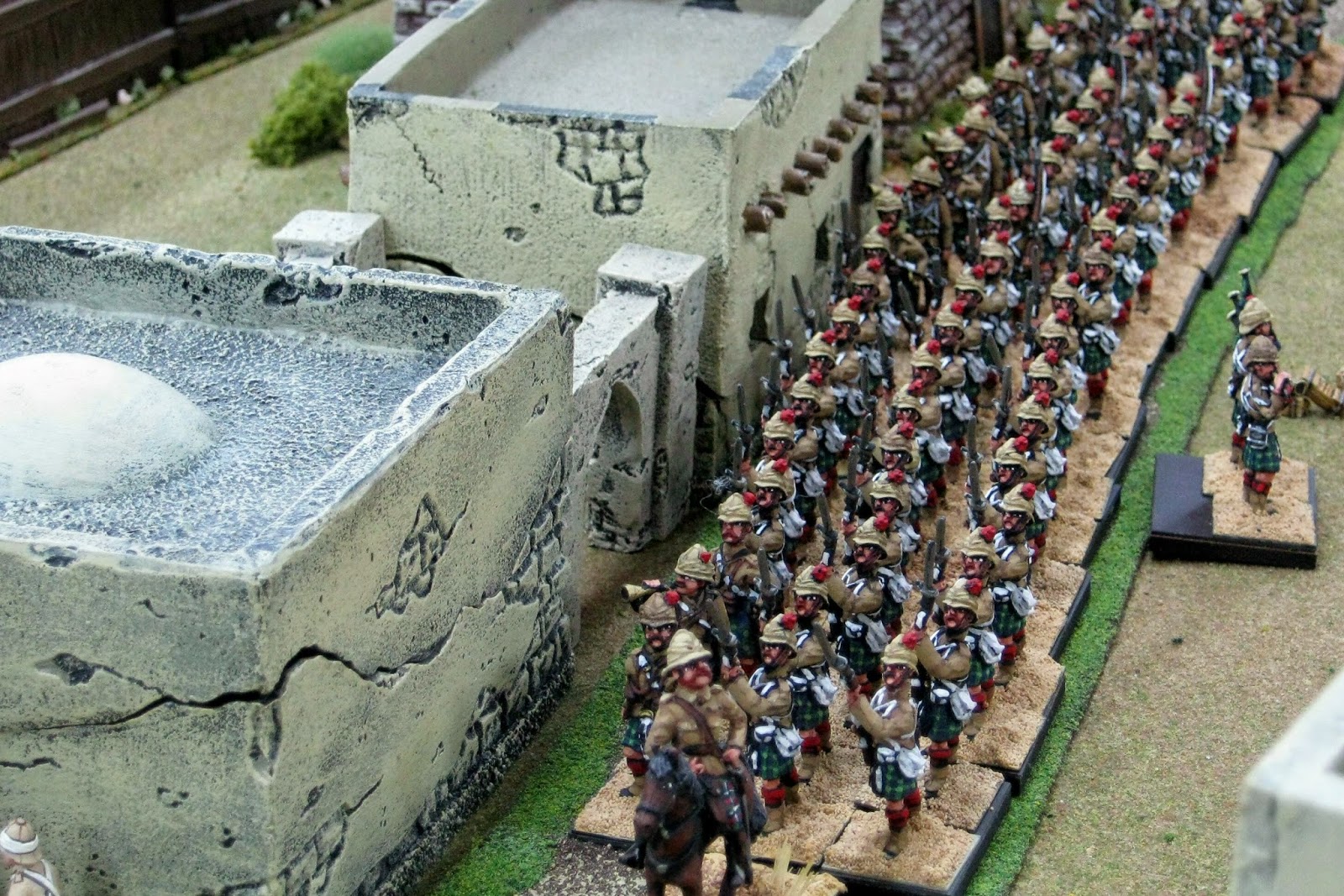 "Weeks of marching, encamping and taking trains eventually found the assembled army at Berber on the Nile. As the crow flies, that distance is 850 miles from Cairo." 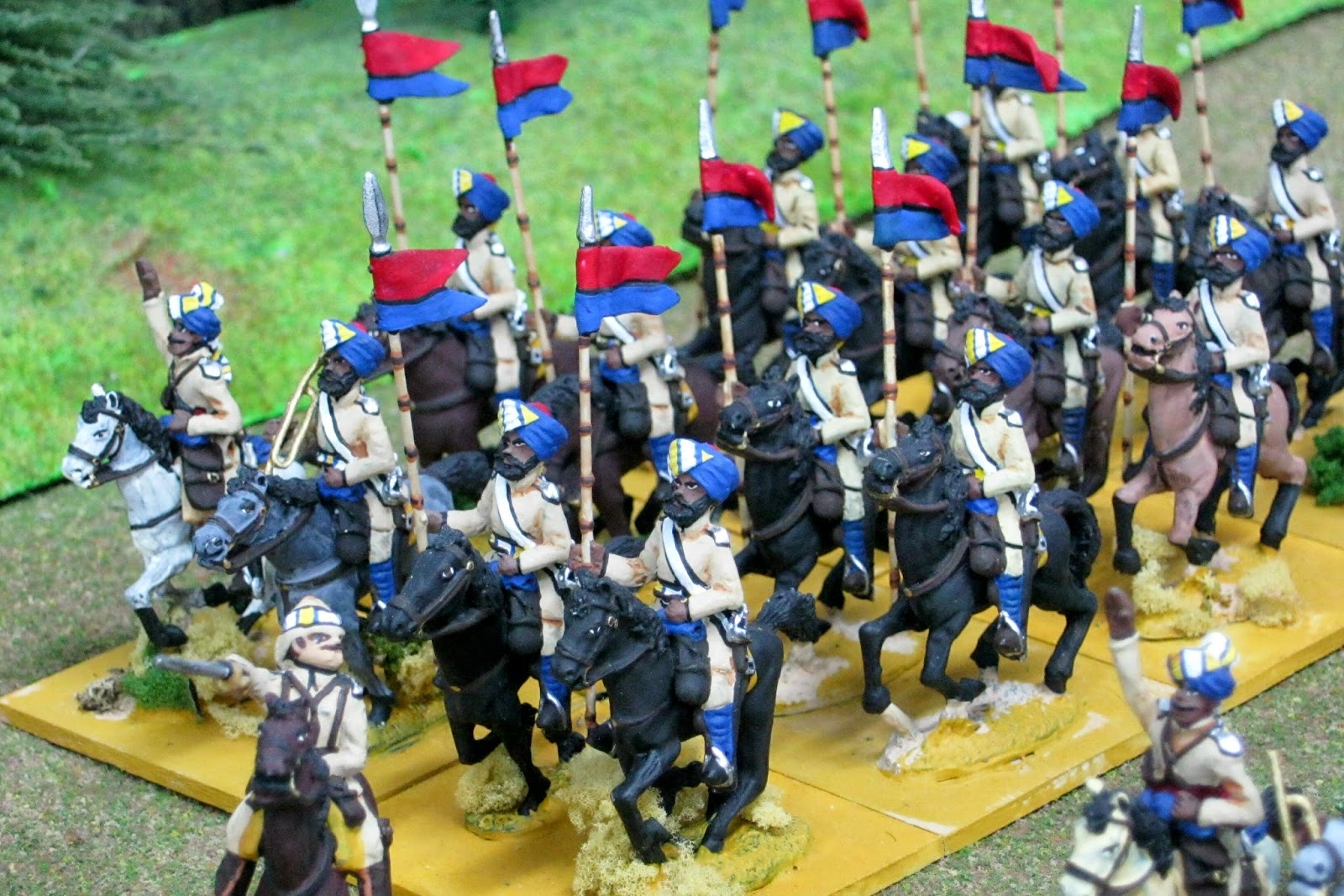 "Another 250 miles must be crossed before the walls of Khartoum would come into view. However, continuing with this force and fight the enemy at the Soudanese capital was not part of the strategic plan developed by the Prime Minister for me."

"My presence in Egypt as you may recall, was a singular ruse de l'guerre disguising the more critical need for me to secretly return to northwest India. For it was there that my old nemesis, the Guru and his Thugee cult, had amazingly revived in my absence cruelly swarming over frontier garrisons and villages. If news about me travelled to him, he would only know I was deeply engaged with the Soudan problem and could not interfere with him." 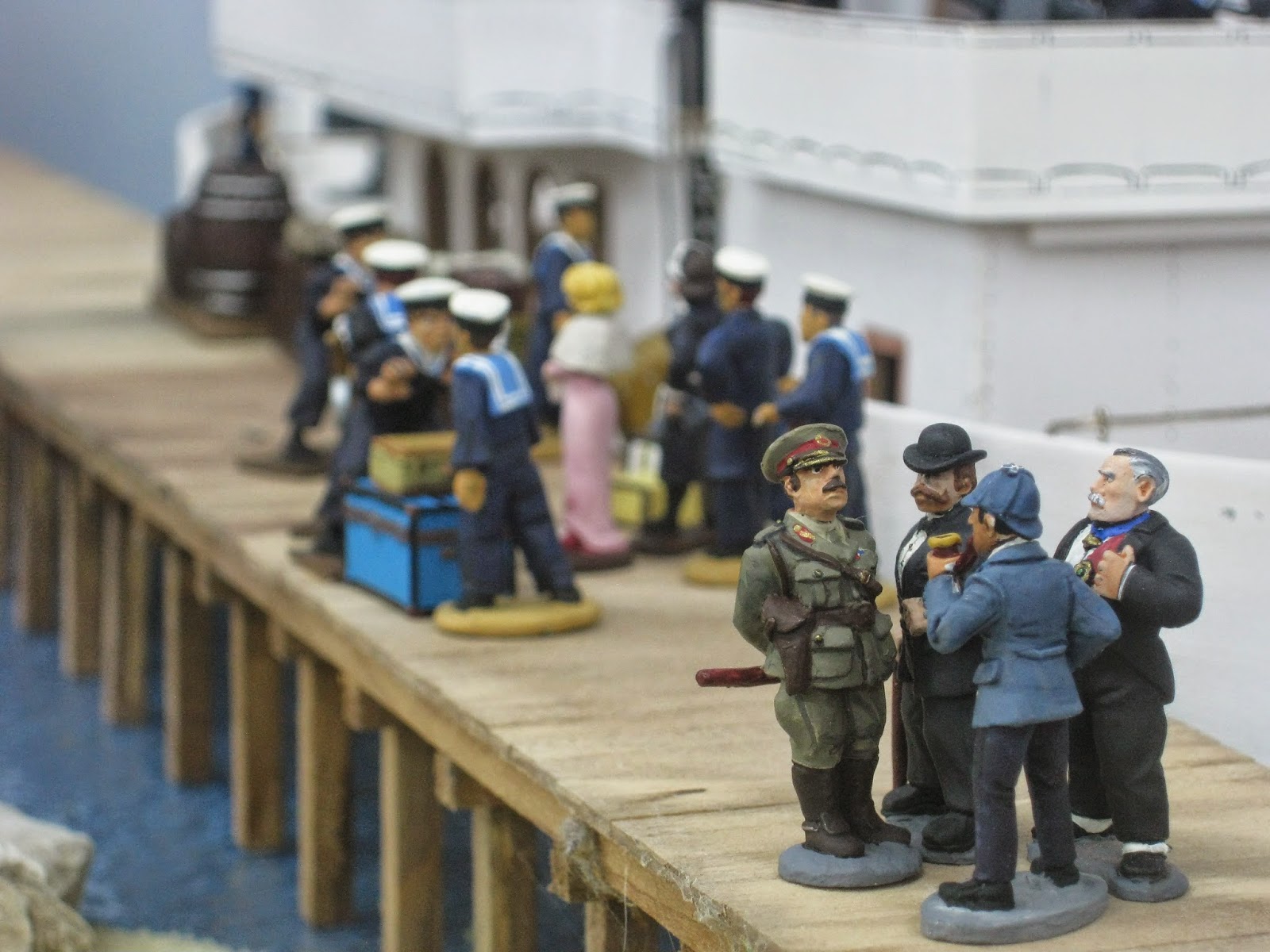 Weeks before on the 11th instant, moments prior to my departure from England, the PM's Special Advisor, Mycroft Holmes allowed me the greatest latitude to misinform newspapers, Egyptian officials, indeed, anyone of the real plan. Regretfully, this also included Mary. The sole reason was to allow the Guru no time to know about my return with the largest army ever assembled to protect The Jewel of the Empire. We wanted him to be kept unaware and unprepared. This time he had to be dealt with permanently. The ruse would add to our advantage." 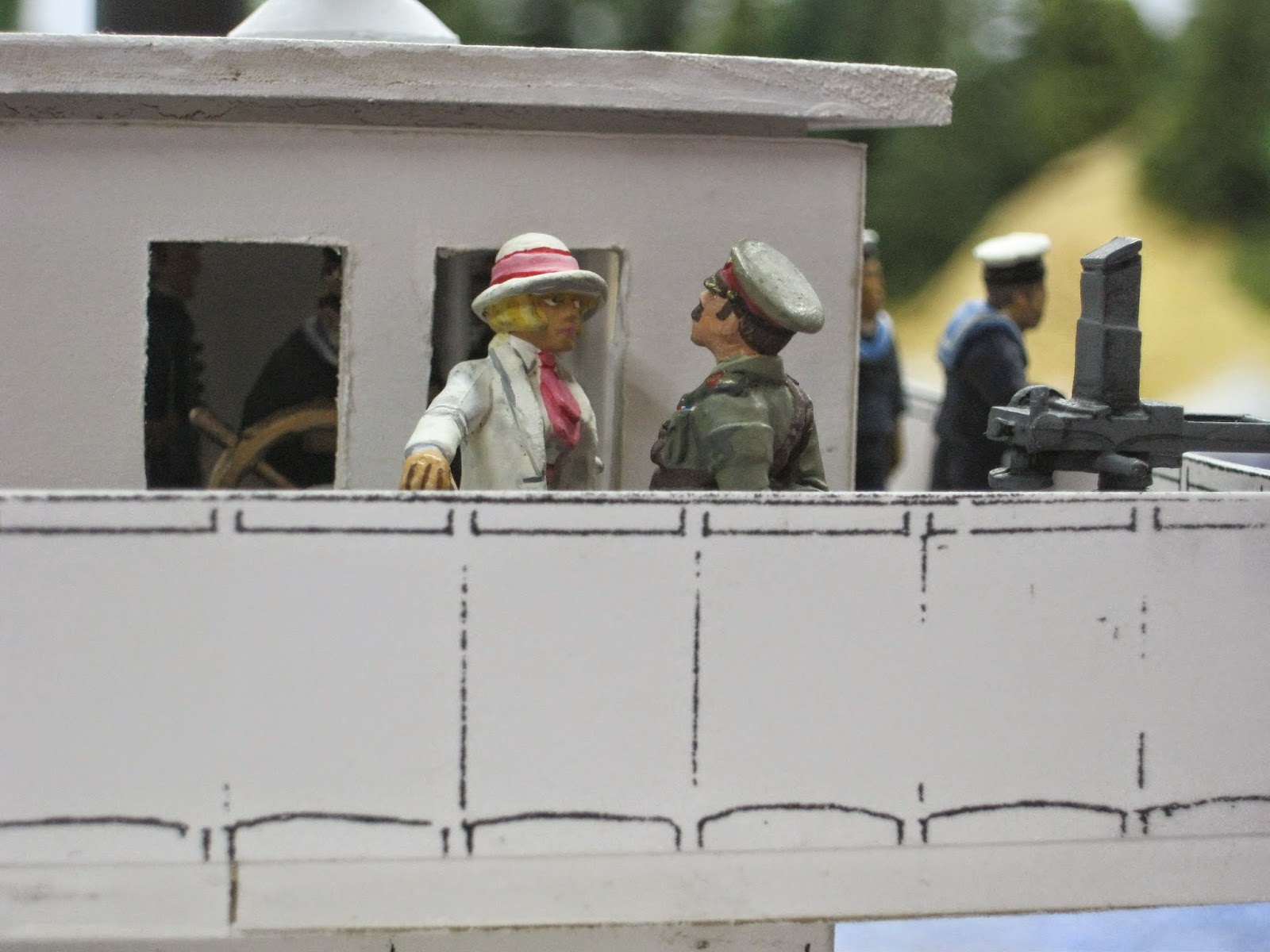 "On September 2, 1903 Mary and I were at sea headed for Bombay, Though originally she was not to sail with me, I allowed it. Aboard ship I broke silence about my mission. I anticipated intemperate remarks from her. I expected a storm of  rebukes about my silence."

"Instead, she demurely said, the whole plan had been known to her from the beginning. Mary had maintained silence for my benefit. She explained...." 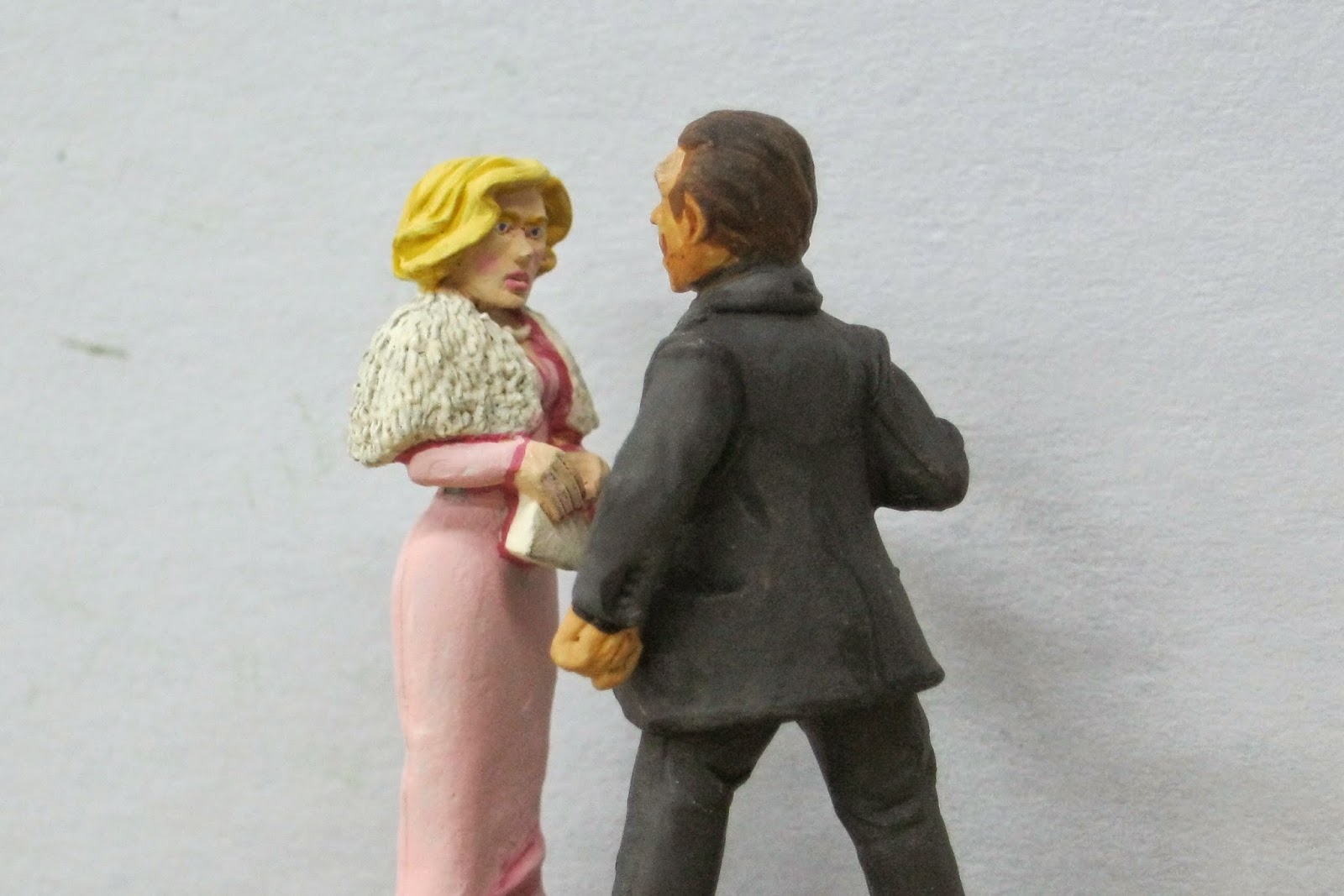 Mary Pettygree: "At the last moment before sailing from England, Mycroft's brother's singular friend, Dr. Watson, begged words to speak in confidence needing my patient understanding. He explained everything and that I must remain utterly silent until I thought it practicable to speak of it. He could not countenance my not knowing." 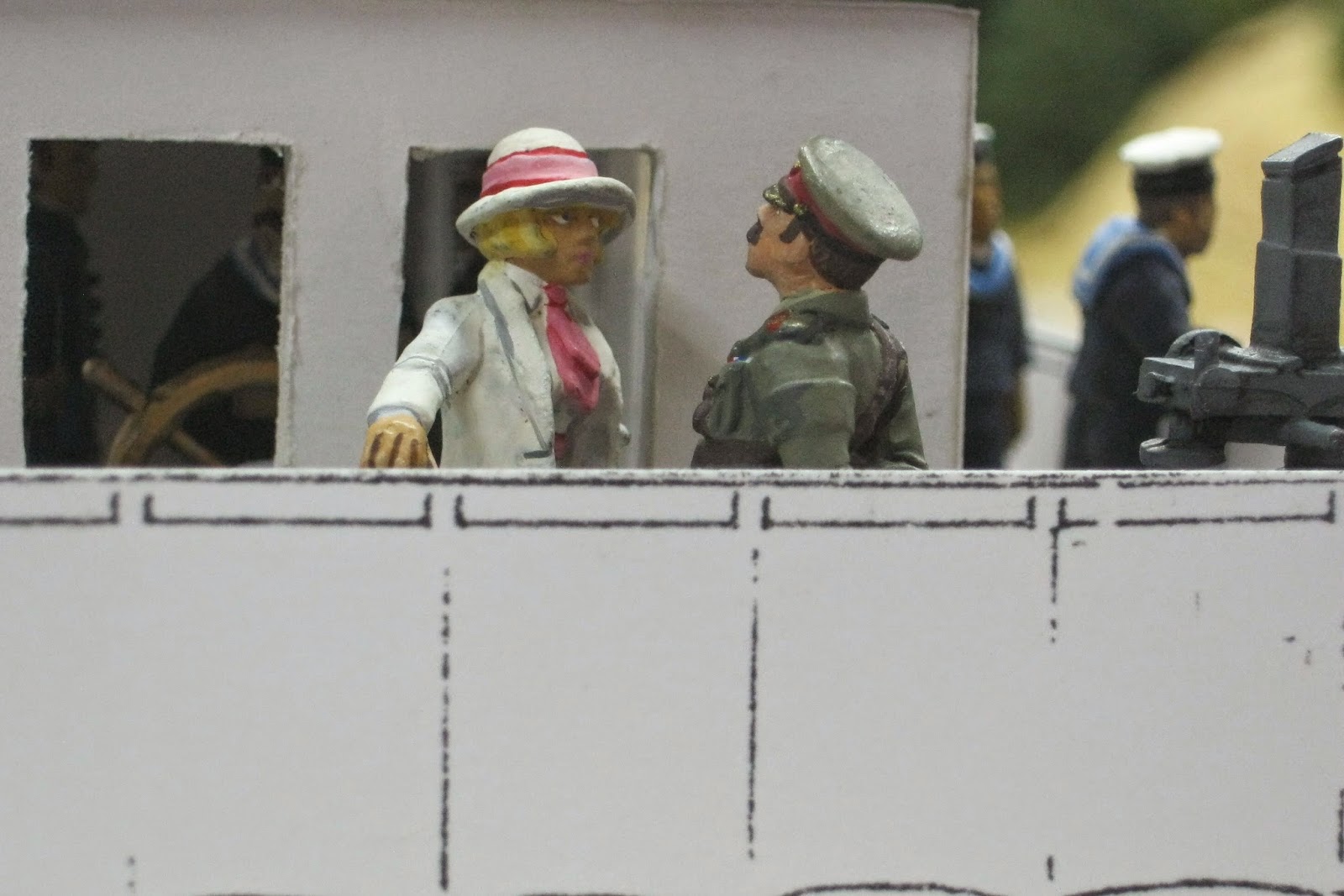 Mary Pettygree: "And so darling, here we are --- en-route to India!"

1) Prodigious thanks to Chuck L. for allowing May 29th images to be photographed on his table. It was filled with magnificent jungle vegetation, the stream and of course ancient Egyptian structures with appealing personalities guarding it. Vegetation came from Pet Store Aquarium Departments as well as the craft store Michaels. Large trees were personally imagineered and built by Chuck. To view Chuck's structures more, see the previous post dated 31 July 2014.

3) For a few years in August or September we've had a large Colonial tabletop game. The next one is scheduled for September 13, 1903/2014.

4) Meanwhile, as you've just read, General Pettygree will not be there. He is at this moment returning to India to surprise the Guru and end his mad scheme to overrun the whole subcontinent.

5) Thank you for looking in. Your remarks are entirely welcome at Comments below.

So many beautiful pictures, this is a splendid and inspired work...great stuff!

Ahhh....I look forward to the dashing exploits of The General and his boys against his old nemesis! Godspeed Gen'l and give him the old what-to eh?....

The Club was positively agog at the General's exploits, both here and through the latest Times. Good show, old chap!

A marvellous work as always. Looking forward to more!

Such fine photos and narrative! I look forward to another installment with which to have a pint and enjoy!

It is always a happiness to read your remarks, Phil, Michael, Anonymous, AJ, Larry and many others too! We are very lucky/fortunate to have local pards sharing their collections of attractive/interesting miniatures and scenery.
Respectfully,
Bill P.

Hi Gallia,
It's really wonderful and help me to make my own stories and scenarii. I have one question : where comes from the Romanov's miniatures? I have already russians miniatures from Askari miniatures for colonial and copplestone miniatures for back ok beyong but I never see your's anywhere. Can you share with me this secret ;-) ?
French follower Laurent Fourcade
Best regards