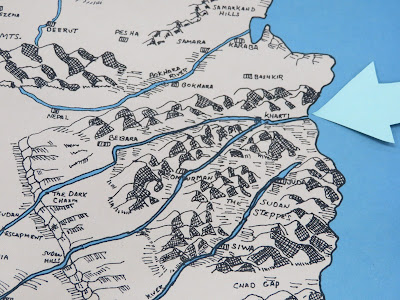 Imperial forces commenced a naval landing on the Sudanese Coast at the mouth of The Bebara River on the imagineered continent of Mafrica. Local Dervish forces immediately launched a counterattack to throw the Imperials back into the sea. This is what happened. 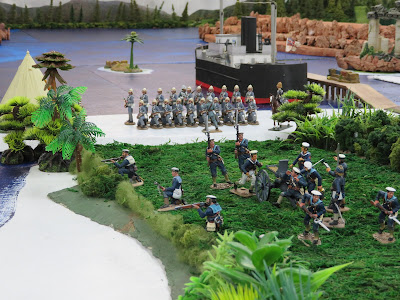 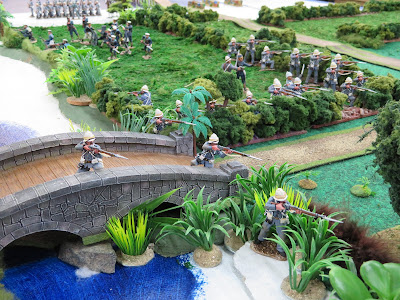 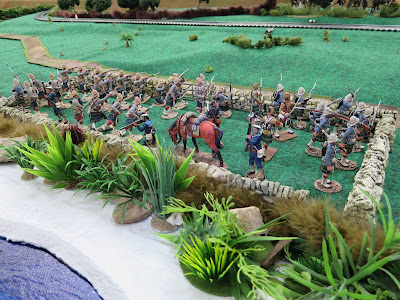 The Most Forward Imperial Position Within A Stone Enclosure 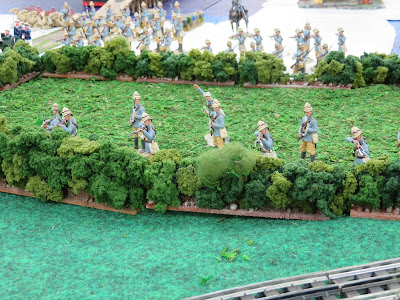 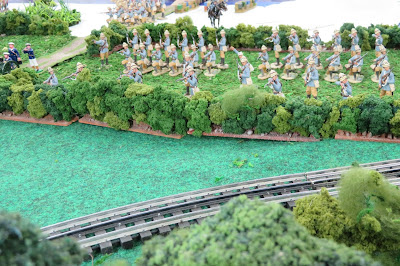 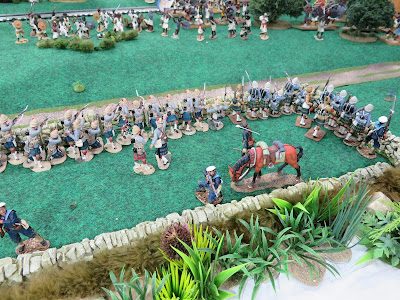 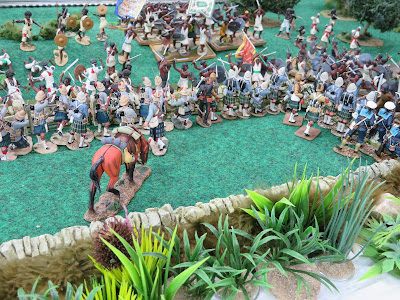 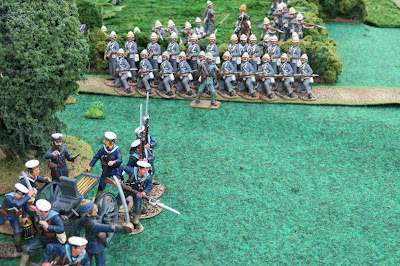 Royal Marines and the Gardner Quick March
To Support The Highlanders 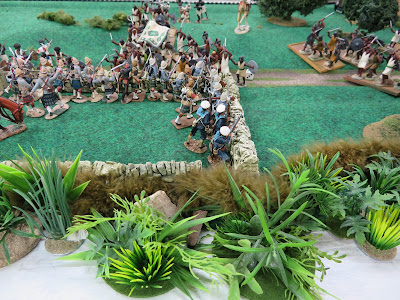 Left: Hand to Hand At The Wall
Right: Dervishes Recoil Back 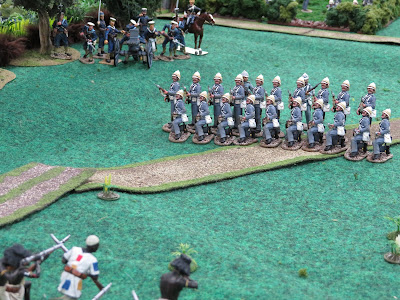 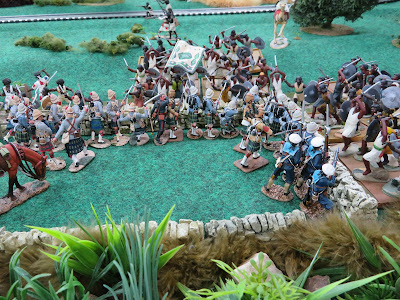 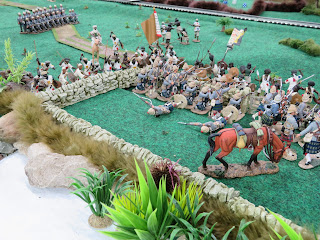 And Flank Them On The Left
Will The Oncoming Royal Marines Scare Them Off? 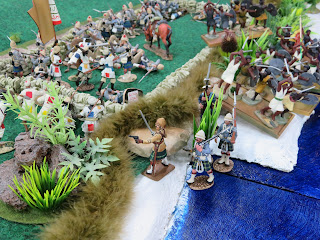 It Doesn't Look Like It!
Both Imperial Flanks Are Lost
Only The Center Holds On 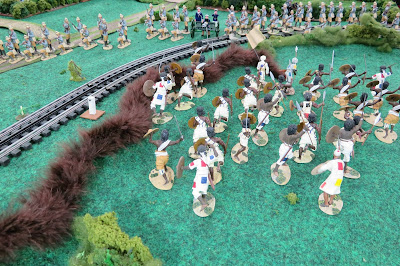 The Camel Corps Is Rushed By Dervishes 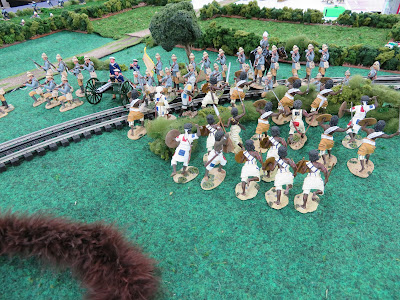 Heedless Of Losses They Charge Forward 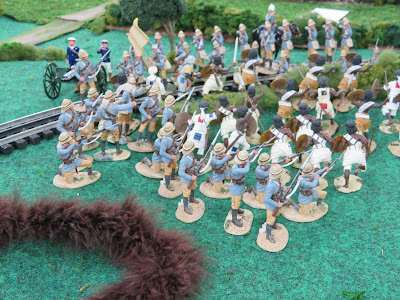 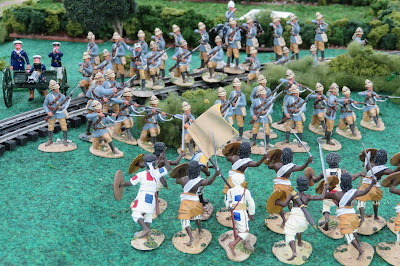 Survivors Defiantly Fall Back To Recover
They Fought With Fanatical Ardour! 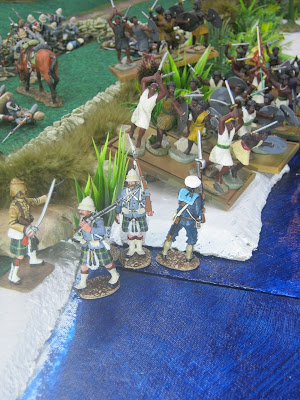 This Looks And Is Dreadfully Bad For The Enclosure
Dervishes Are Within And Behind It!
But....

Our game time was up at 9:20 pm. Many Dervishes had routed from the front of the enclosure and surely (?) the nearing Royal Marines, Gardner and surviving Highlanders would cause the winning Dervishes within to logically retire.

Kudos to the Dervishes (John B. and Greg B.) for putting a huge scare into the two Imperial commanders; Jim and I! Somehow we survived.

The landing area is secure for the moment and the Dervishes are retiring to regroup and summon hordes of reinforcements for Battle #2.

(1) I am gravitating toward issuing game mission orders in the briefest way possible. It seems to help and allows players to use their own wits and intuition a bit more. And it is fast so a game can get underway without more than a few minutes of conversation. In recent years it seems as if lengthy game orders and speeches are not productive. Hence, this is all I gave to our four players. 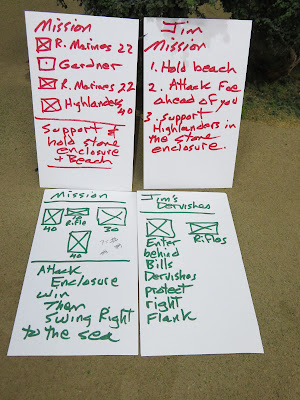 (2) It helps enormously to use Quick Reference Charts. They are fast and each section has a number. 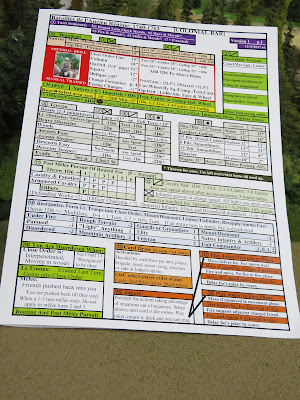 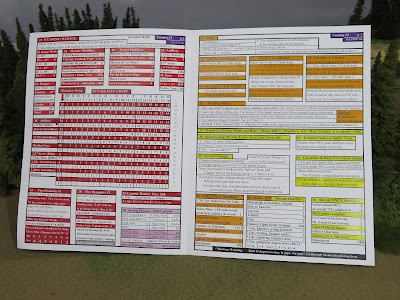 If you click on the above to make the image larger, notice that each little section is numbered. Thus, during a game all we have to say is, "Charlie the answer is in #19 or #44, etc." It's fast. Fast turn resolution is very important to maximize figuring things out and getting in more game turns.

(3) The enclosure creates an interesting and fun game tension. All of us know about Roarke's Drift. We recreated it a little differently.

(4) Bill's Imperial Roll Call After The Battle:
We should cobble together dice throws for KIA, Lightly Wounded and so on.

A visual treat and great read!

We are gratified you like the AAR Stryker.
Thank you for posting comments.
Respectfully, Bill P.

Well fought General Pedicure, but we kicked your highlanders in their little sporrans and are using that to recruit more True Believers. When next we meet the ground will run red with a CRIMSON TIDE of infidel blood.