Chapter 28: Arrival Before The Secret Valley Or? 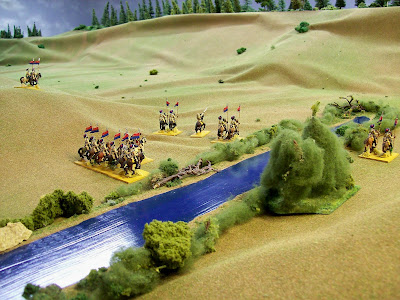 After the march through The Khyber Pass, the 2/9th Bengal Lancers lead the way into a picturesque valley. 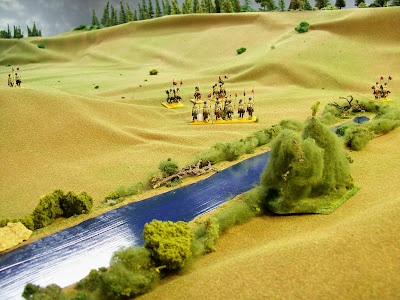 "Squadron! Wheel by the left. MAARCCHH!" Flankers follow to the sides. 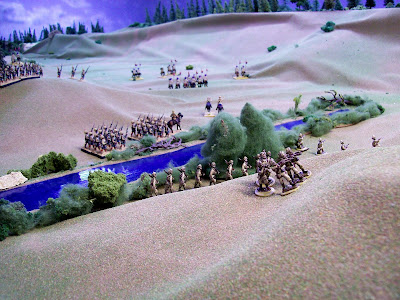 The remainder of The Advance Guard arrives. The Seaforths are to the left and center whilst the Bombay Miners and Sappers screen the right. All is quiet. Peaceful sunny day too. 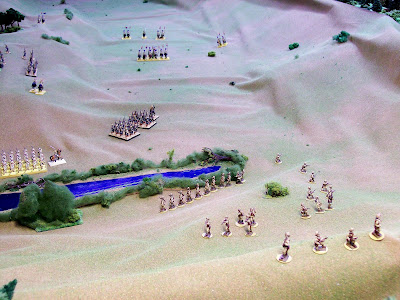 The Main Body starts to arrive; 66th Foot Berkshires to the left. The Advance Guard and flankers press on. 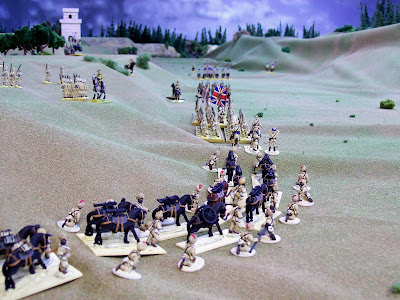 The Berkshires march farther in followed by The First Indian Mountain Battery. Times correspondent Pearson writes notes regarding the procession. 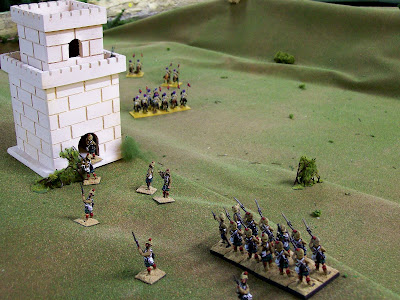 We've gone forward to join the Seaforth flankers for a moment. They've encountered an abandoned tower. 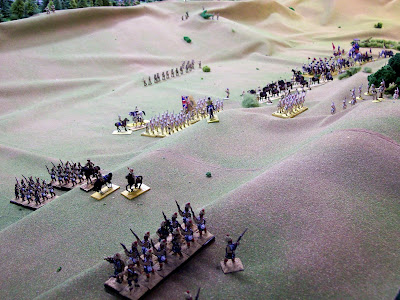 Now turn round, if you please looking back. The Berkshires are in the middle followed by the First Indian Mountain Battery, 1/9th Bengal Lancers, The Rajah of Bebara (Polish crimson flag) and the magnificent jumbos of The Elephant Battery swaying into view. Flankers to the sides protect The Column from surprise. 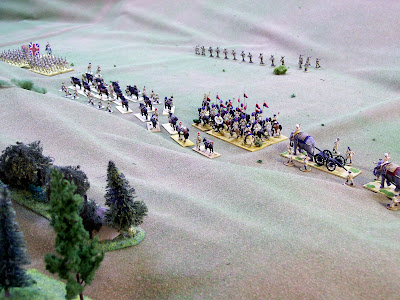 The rear of The Main Body. 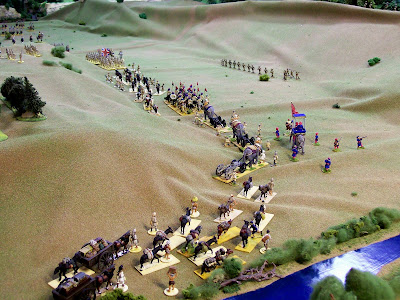 The Supply Column arrives. Nothing to be nervous about you lot - for now. This does not help their tormented thoughts. 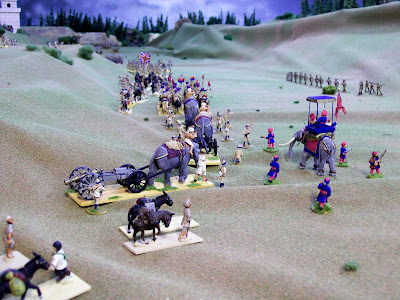 Never mind them. We need a closer look at the jumbos, right? 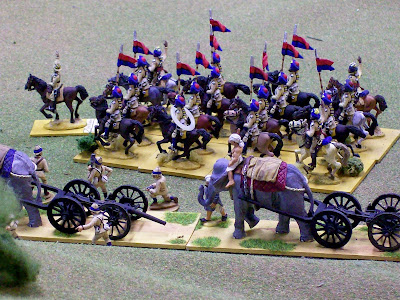 Better still! Jumbos and 1/9th Bengal Lancers. The Sowar with the casualty ring is actually in hospital back at Bebara. 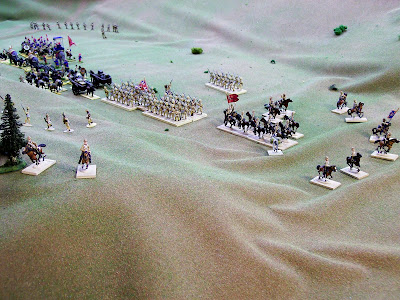 The Rear Guard;  First Sikhs march behind the Supply Train as the Tenth Hussars cover the rear of The Column. 1/10th are in column whilst 2/10th screens the rear and slope top nearest you. On the left! 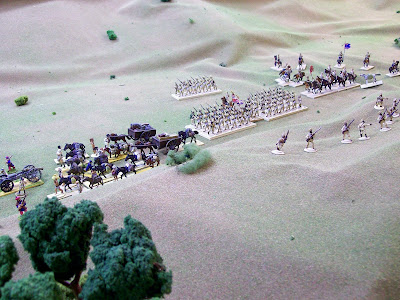 Another view of The Rear Guard with flankers out.

CLOSING UP TO THE FRONT -- KHYBER FIELD FORCE 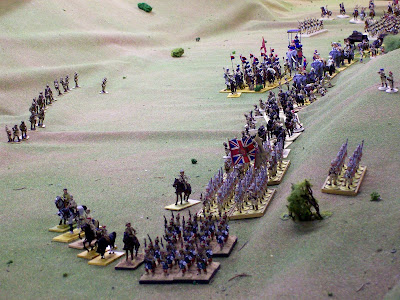 The Column is closing to the front, Seaforths at the head. 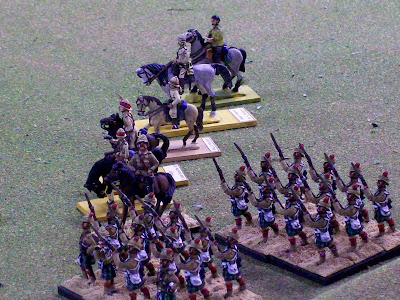 Officers to the front! Something is brewing methinks, don't you? That's Colonel Archibald Sinclair of the Seaforths looking at you. Behind him in sequence: Cavalry Brigadier "Blacky" Blackiston with binoculars, his ADC Major Grant Forsythe III, ADC to the General Major James Mitchell, General Pettygree 'imself and Times correspondent Pearson. 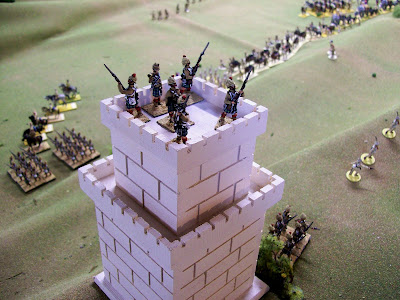 The Seaforths see nothing but a prodigous bird from the abandoned tower they occupied earlier. But.... 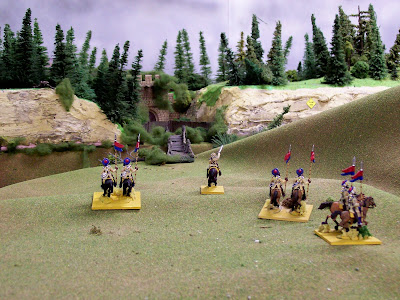 A Troop 2/9th Bengal Lancers have encountered an escarpment and.... 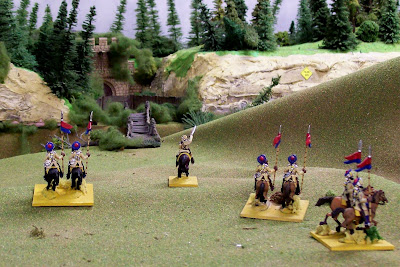 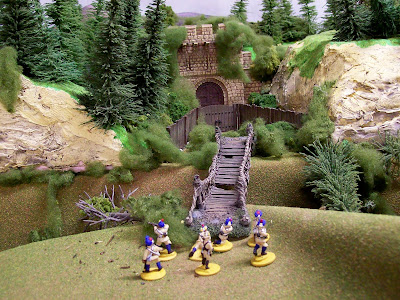 They walk cautiously forward for a better look. 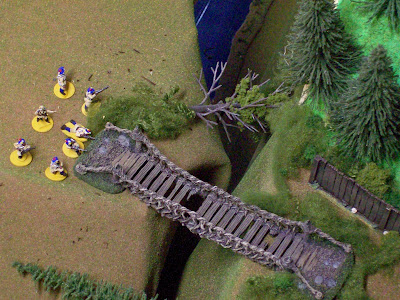 While an unseen member of the class of aves glides and circles overhead. Heights high above or descending the sheer drop to the river below do not bother it, but these walking creatures are disturbing --- perhaps edible though. It's flight is silent and unobserved because.... 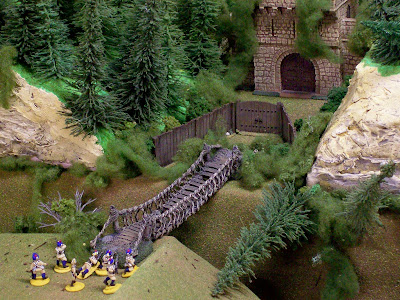 A Troop's total attention is fixed to the immediate front. Lieutenant Gill draws his service revolver and....
----------

Jeff, Hopefully this gives you some relief!
respectfully,
Bill

The march views are wonderful . . . and that bridge into the unknown looks great as well (the bluff to the side is really nice too).

An excellent "fix" for me . . . right now I've got a messed up right knee and gout in my right foot; so I'm hobbling around the house using a walker . . . and I'm so zonked on the meds that I really needed to see something like these vistas.

Thank you, sir. Thank you very much.

A great storyteller you are, sir.
Terrific photos with great atmosphere. Well done

Hi
Rediscovered again in the web 2.0
Thanks for sharing!
Rafa

Send the scouts over the bridge! No telling what harm could be done by delay and it'll be useful to have a bridghead to protect for the engineers to work on aproper bridge if it looks like the guns and cavalry will be needed!

But watch out for falling rocks! ;)

Excellent pictures as always! Very atmospheric. almost cinematic. I can almost hear the clank of harness, chatter of drovers, tromp of foot and horse and elephant.

Another enthralling chapter in the saga of the Khyber Field Force. Keep up the excellent work!

Excellent adventure. I too say send a party across. Hate to go back to report that something (I didn't get too close a look) is up there. Bah! Won't do at all.

I am really enjoying your story and have been following it for many months. for what it is worth the result of episode 30 is quite realistic as the British army always ' stands to ' an hour before dawn when on active duty, just so they do not get caught out in a similar situation.