Date: 16 October 1899
Location: Two Miles From The Escarpment Camp
Situation: Imperial Pursuit Three Hours After The Sunrise Battle Of The 16th
BTW: Clicked images expand amazingly. Try two clicks too.
---------
Previously The Khyber Field Force pursued the Tug Army to a sheer escarpment on 15 October. KHAN attacked the next morning from behind but retreated. Resolved to engage the foe where found, General Pettygree immediately broke camp and gave chase with the brigade of cavalry. The farthest in front are 1/10th Hussars.... 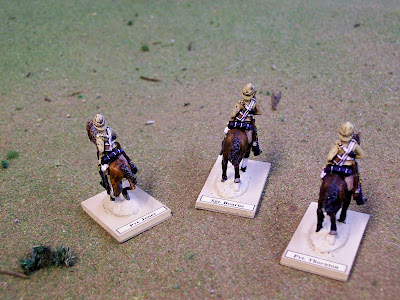 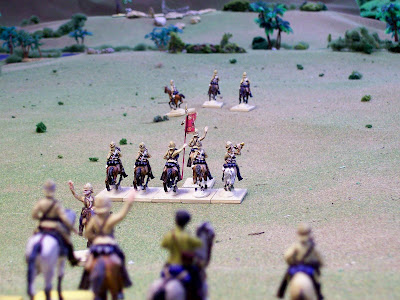 The rest of the 1/10th Hussars (red guidon) provide close support in case of mischief. Behind them.... 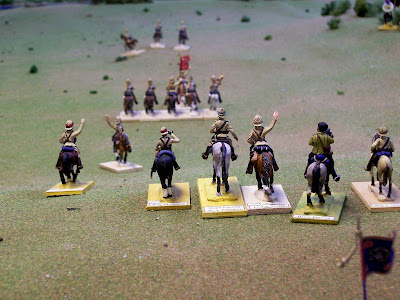 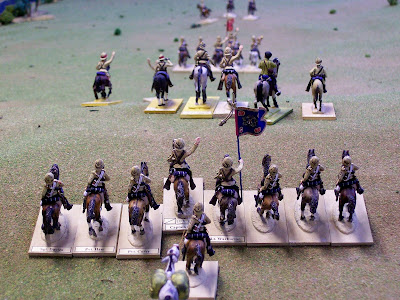 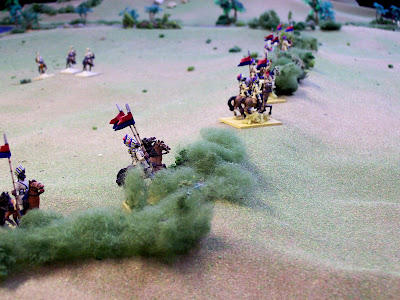 To the right a squadron of 9th Bengal Lancers peer into the distance seeing nothing. 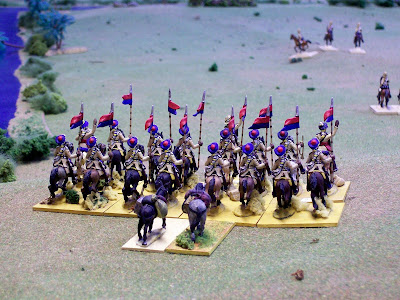 The rest of the regiment is massed to the left of the general. 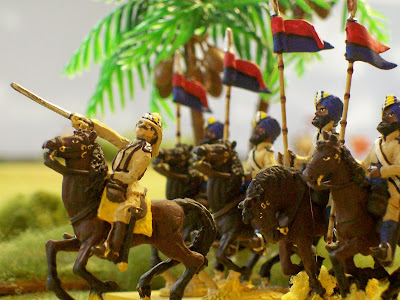 Way out to the left is Lt. Gill with a troop of lancers screening the whole Imperial Force. 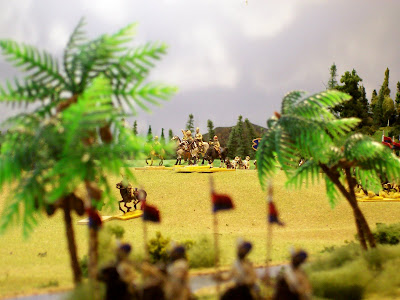 Looking past Lt. Gill's troop we see General Pettygree and staff on the rise of ground. 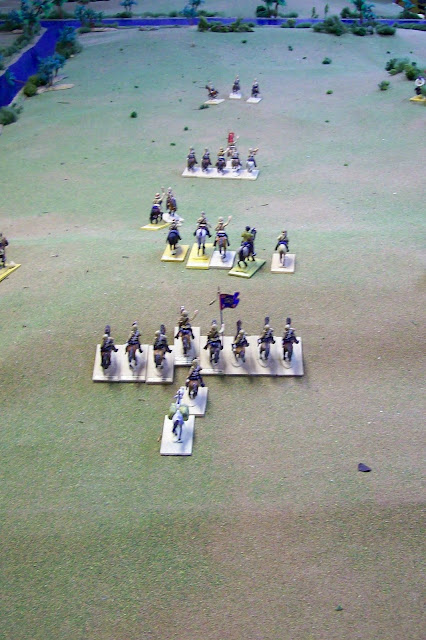 The scene to the front of the brigade of cavalry. 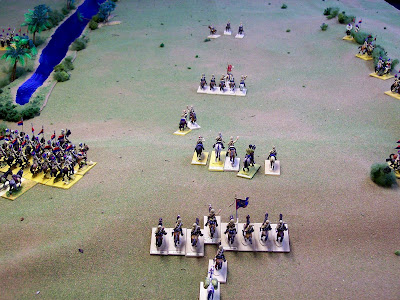 A wider view. Something is out there in the distance as we return to.... 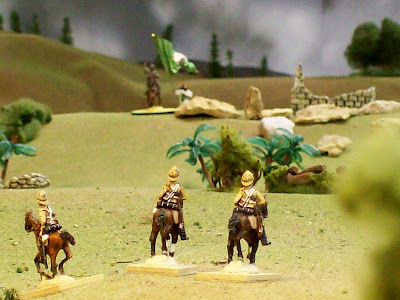 ----------
CLOSING REMARKS
1. The surprise attack by KHAN this morning might as well have been months ago.
2. What lies behind that distant ridge?
3. Will the Imperial infantry and artillery arrive to give battle today? They are coming. Turn around in your imagination to observe the brigade square marching toward you; dust rising in the sky, jingling equipment mixing with the voices of unhappy supply animals and their handlers.
4. You may have heard the general say, "If the infantry comes up soon, we will cross the river and attack today. That chap KHAN won't get away again if he stands."
5. The tabletop game will be fought in two sessions on 9 and 13 April - hopefully to conclusion.
6. What would you do if you were KHAN or Pettygree?
7. Comments welcome below at the word "Comments."
----------
Posted by Gallia at 11:20 PM

Gosh,that was stunning stuff Sir! Keep it up!
Alan

For the Khan - he needs to attack as soon as possible before the British have time to put together a formed defence...

For the British I didn't see any infantry with the party so the sensible thing would be to fall back on the main body... if there isn't time then I'm assuming they are armed with carbines, in which case dismount and form square while sending a courier to rush up the infantry with all dispatch!!

Either way - I look forward to the game!

Well, Steve-the-Wargamer, that's no way to build an Empire. Have at them, I say! Smite the Philistines, smite them hip and thigh!

Oh, I DO feel better now.

Well, I say, make a feint towards the Khan and draw him out, then do the Parthian bit on him and draw the pursuit towards the Brigade Square and let them feel the embrace of the Enfields.

(Not much help with the details, but the objective is clear enough.)

If I were the Khan I would indeed most quickly smite the British before they can get it together....

Hmmm, looks like the river are hemmed in by rivers, I wonder if they are fordable? Khan would know. They old frontal rush isn't working so well, I'd go for keeping most of the cold steel types hidden until the British pass by them, use the cavalry to keep tempting them forward without engaging in Mahratta style, and start sniping into the flanks from hill tops and beyond the river,melting away when attacked. Then, once the ferengees are sufficiently worn down and out of position, " Up ghazis and at them!"
Looking forward to the next episode.