"Earlier vexations regarding the curious nature of my mission were slowly being replaced by a need for caution. An alarm did not yet brood upon my thoughts but I could foresee the possibility. For example, was the dignified yet easy-going man standing before me really a Colonel Edward Boyle? I had no means to answer my interrogative nor verify an answer should one be given."

"Was I being practiced upon? Were scant and duplicitous explanations solely designed to prevent unsavory parties learning about a covert mission? I could understand protecting the mission. Was there more?"

"There was nothing to do now but press on listening to Boyle advancing his promised account about himself, Countess Alexandra and her party of explorers. For privacy we descended to the taff rail where I could scarcely countenance the veracity of his tale. Methodical thrumming of the Zanzibar's engine cleverly masked our conversation as we continued up river to Dongolo."
---------- 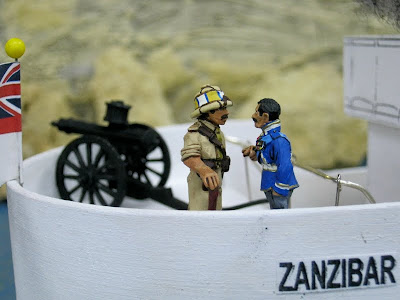 Boyle: "You will come to understand Colonel that a portion of my duties are of a particular nature. Disguises, a deep purse, fluency in seven regional languages and associates whom you will never ascertain allow me to operate unseen, as it were, within the lairs of unsuspecting foes. You observed correctly that I resemble an Iberian official. True for today and perhaps for several days more but...." 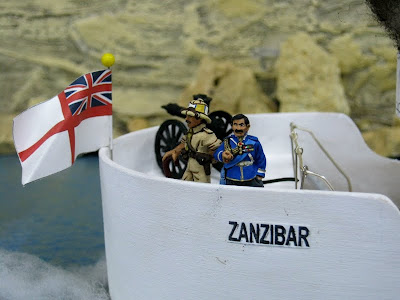 Boyle: "Forty-two days ago and several hundred miles from here I resembled nothing of the kind. Ah, I've advanced too far ahead."

Lawford: "Pray go back in time, if you please."

Boyle: "Months ago we intercepted an electric communication thought reliable. It stated the Romanovs would land an expedition at Buradi to.... Are you familiar with the port Colonel?" 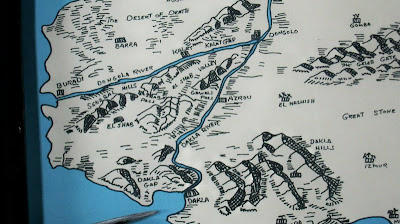 Lawford: "Yes. Whilst aboard Zanzibar inbound to Dakla I was given a map showing Buradi around the western bend of Mafrica. It is situated at the mouth of a river ... the Dongola, if I remember it."

Boyle: "Just so. The expedition did indeed land at Buradi. Several days followed to acquire supplies, tentage, guides and soldiers; all the paraphernalia so necessary for an overland journey lasting several weeks. Satisfied with acquisitions, the Romanovs headed inland toward the city of Kalat where I engaged them."

Boyle: "Your Countess Alexandra, Colonel Villainovich and their retinue came into view as expected. Naturally my appearance was altered and reinforced by speaking a local dialect. There were difficulties in communicating until we discovered a common medium; broken English."


Boyle: "My disguise as an indigenous resident of a home near Kalat was acceptable to them. I presented no threat nor was there any cause for alarm. Yet they nervously deployed around my false domain as if there was."
Boyle: "The Romanovs inquired about Kalat."
Villainovich: "Is this city friendly or not? Will a bribe be necessary to pass through?"
Boyle;" Of the entire population of Kalat, said I, only a few remained. My family sheltering within the wretched and humble home you see, myself and a poor boy with his camel in the distance are the only inhabitants."
Lawford: "A confederate of yours surely?"
Boyle: "Surely."
Boyle: "One officer, a Captain Tumarkin, ascended to my rooftop to be certain there was no possible trouble close by."
Boyle: There being none, Villainovich ordered the column to cautiously continue its march. They soon came upon the boy and camel raising their suspicions." 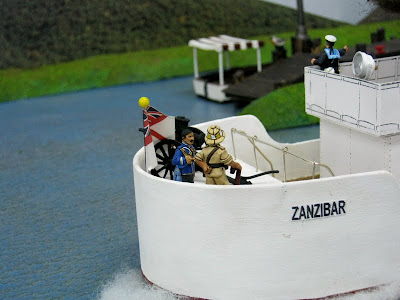 Boyle: "It was humorous observing the soldiers prepare for the worst!"
Lawford: "And the boy, did he lead them onward into Kalat?"
Boyle: "He did after acceptable assurances no treachery was near from the absentee population. More relaxed, the party continued at a better pace than before."
Boyle: "You see Colonel, Kalat had been abandoned the day before. The people feared for their lives because of troubling stories revealed to them about Romanov treachery, mayhem and the like by my associates. They vanished into the hills."
Boyle: "Proceeding forward, no city dwellers were in sight. Not even a domesticated beast or dog."
Boyle: "Scouts initially entered the city spreading out here and there to be sure no dangers lurked behind closed doors or impenetrable walls."
Boyle: "The column halted, the cavalry looked outwards and the screen moved deeper into the city."


Boyle: "On balconies and rooftops they saw not one soul."
Boyle: "Then Captain Tumarkin led them safely within when...." 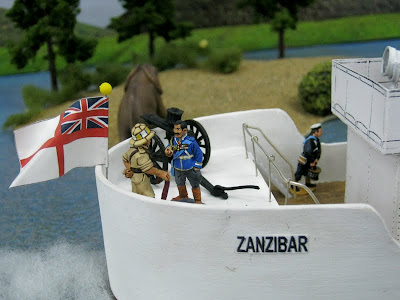 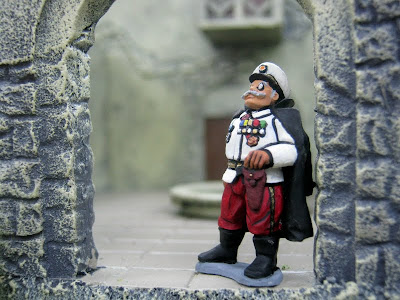 Boyle: "None other than Romanov Consul General Kuragin suddenly appeared  in an archway." 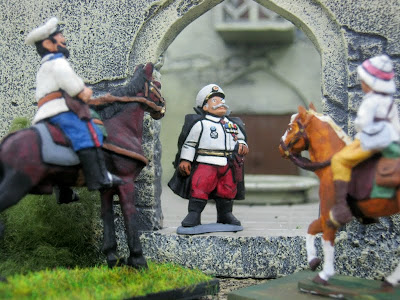 Boyle: "Villainivoch and Alexandra rode in his direction, dismounted and disappeared within the compound." 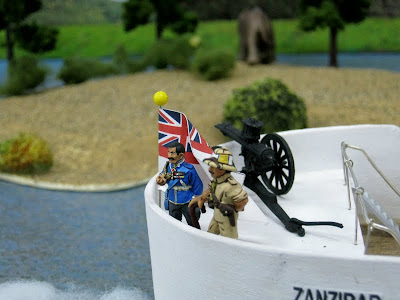 Lawford: "Did the boy discover anything more?"
Boyle: "Not until the next day when...."
----------
CLOSING REMARKS:
1. Recreational Conflict sells Bulgarian cavalry painted here as Russians. See: http://www.recreationalconflict.com/
2. Russian infantry are Redoubt Miniatures. See Russo-Japanese War: http://www.redoubtenterprises.com/shop/?page=shop/browse&category_id=82b3fc689d33a0042c7f7d9aa831142c
3. Pulp Figures made our Romanov Consul General. See: http://www.pulpfigures.com/catcode.php?range=Personalities&code=PHP&number=17&custID=653051031305155441
4. For references to structures, ships, etc. see the previous chapter.
5. Thank you for boarding HMS Zanzibar with Colonel's Lawford and Boyle -- if Boyle is his actual name. We'll continue up river to Dongolo in two weeks. Till then why not be seated in a deck chair with a cool drink and watch the Mafrican wilderness pass by?
5. Comments welcome naturally below. What would you like to drink?
----------
Posted by Gallia at 2:04 PM

I was surprised that when I clicked on the photos I found them much smaller than previous photos.

Did your camera pixel size get accidentally reset? (That happened to me recently.)

I'll have a coconut milk and gin, please. A most interesting tale. I will enjoy the passing view while I await the denouement of the narrative, indeed.

Great write up and nice pictures. Are the buildings resin or scratch built?

Thank you Everyone!
Feedback is always nice.
Appreciated too.
-----
Jeff
I think camera settings might have changed. I'm looking at all the settings, etc. this week. For a little inexpensive camera it has a ton of options - more than I thought. Thanks!
-----
Adelaide and AJ,
Right way Gentlemen.
One Coconut milk and one pink gin with ice.
-----
Ross I mix True Blue with umm Fire engine red or something - Folk Art craft paints I think. A tiny amount of true blue.
-----
Thank you Chuck!
Soon it vill be time for dice throwing!
-----
Kevin,
All buildings have been from Miniature Building Authority. SOme sort of very hard resin.
-----
Tally Ho!,
Bill