Important!
The Expedition To Alexandrapour Story Is Paused
Because We Are Returning To....
----------
THE SURAJISTAN FIELD FORCE
----------
Date: 5-17 June 1900
Location: To Kordofan, Surajistan And Beyond
Situation: Sketching Patrol
Double Click Images To See More
----------
FOREWARD
Chapter 50 resumes the photo story of General Pettygree's campaign to suppress the secretly revived and changed Tug cult. Thought to have been extinguished and/or peacefully assimilated by Colonel Sleeman a half century ago, the revived cult shockingly flooded out of The Hidden Valley into Surajistan in 1898-1899 to spread their beliefs by the sword, rifle and rumaal (strangling cloth) in an unexpected avalanche of mayhem and terror.

The Surajistan Field Force will soon depart from Fort Grant to stop the insurrection for all time. Preceeding the Main Body by a few days is Captain Bartlett's Sketching Patrol. Let's press on with them, shall we?
---------- 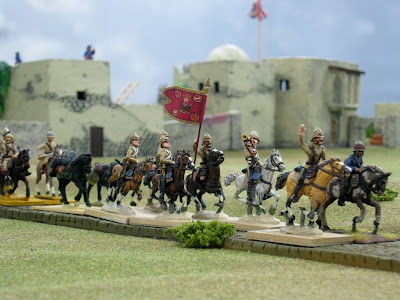 June 5, 1900:
Captain Bartlett's Sketching Patrol departs for the interior of Surajistan. The expressed mission is to enhance maps of the region and return to base in a fortnight. However, this is a ruse to least alarm the foe. What you actually see is a screen covering the march of the main body of The Surajistan Field Force scheduled to depart Fort Grant in a few days. Scouts are even farther out. 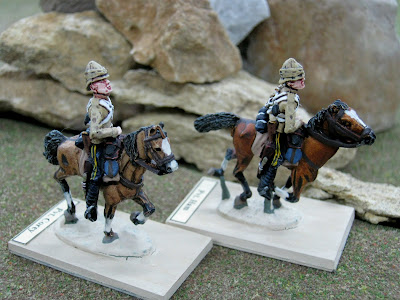 June 9, 1900:
Troopers Ham and Corey, 10th Hussars scout the right flank.
Ham: "Go up there in them rocks the sergeant sez an see wot there is..."
Corey: "It's us then, always us in this wretched heat an dust lead'n the rest." 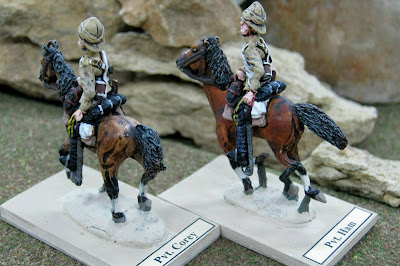 Ham: "Dead end. Back to the column to report."
Corey: "Aye and nuth'n liv'n anywhere to be seen."
Ham: "Hid'n they are. Why don't they come out and show themselves?" 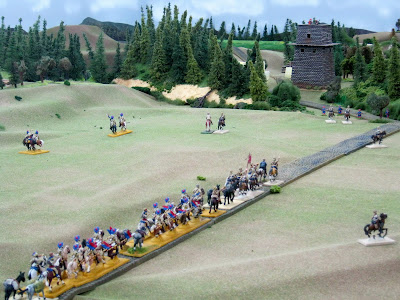 June 13, 1900:
The Sketching Patrol approaches the friendly village of Kordofan. The Imperial force consists of 1st Squadron 10th Hussars and 4th Squadron 9th Bengal Lancers. This time the ever vigilant Troopers Ham and Corey are in front. 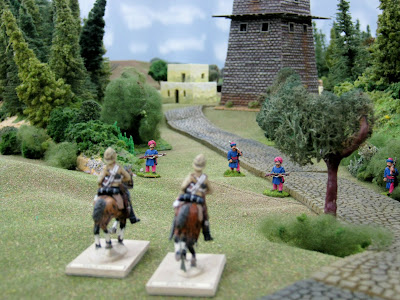 Ham: "Two to four. Bad odds for them, I'd say."
Corey: "Sergeant sez Cordowham is a friendly village, you know."
Ham: "We've heard that afore. Alright then, let's have a chat with this lot up 'ere."﻿
Kordofan was a friendly village; friendlier still when Captain Bartlett and Political Officer David Faraday paid respects with a gift of 5,000 rupees before passing through.


June 16, 1900:
After Kordofan the road ended and the column moved into regions of sparse forest, hills and less open country.

Ham: "Well Trooper Corey, today we have the honour to eat the dust of the column."
Corey: "Quit yer bellyach'n Trooper Ham. It's a presdigeeous honour be'n the rear guard you know. Not everyone gets a chance to follow from the most dangerous position."
Ham: "Dangerous! Still not a vexing Tug in sight. No place fer 'em to hide I see."

As visually enticing and stimulating as ever- keep up the good work...

Excellent work, as always. Just one small quibble. In the British army, a cavalryman from a line regiment is referred to as Trooper, not Private. A relation of mine was in the 10th Hussars during WW2.

AJ,
Thank you!
I did not know that at all.
What are the other ranks?
Corporal, Sergeant, etc.
Tally Ho!,
Bill

Bill, AFAIK the other cavalry ranks are the same as the infantry, although I *think* the sergeant in each troop is called Lance Sergeant. The rank of Cornet was replaced by 2nd Lieutenant in 1879. Ranks in the Household Cavalry follow their own system - but then, they were always peculiar. ;)