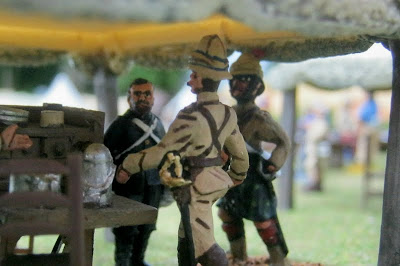 Verbeek: : "After the Advance Guard Camp was established, we noticed activity in the hills across the river. Late on the 22nd. our western piquet was surprised and overrun. Thereafter the Thugees immediately moved to our fortified buildings at the ford. Their sudden audacity and impetuosity was a shock. They moved with lightning speed!" 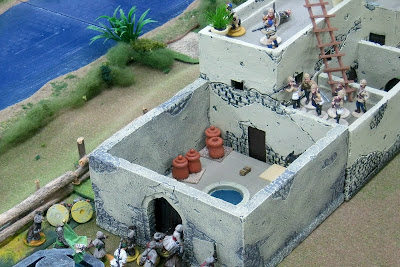 Verbeek: "Captain Bartlett withdrew the men into and on top of the main building. Entrances were heavily boarded and defended. The western door held for a long time before collapsing. Luckily the foe lost heart in the ensuing melee there and fell back to regroup - uncowed." 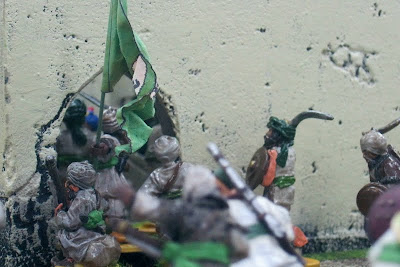 Verbeek: "The eastern door collapsed almost immediately. Our men were thrown back waiting for l'coup de grace when almost as suddenly the entire enemy force retreated and vanished. A miracle General!" 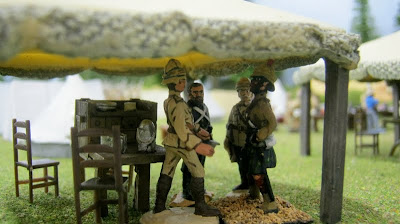 Verbeek: "Before sunset the Captain Bartlett asked if I might ride to report the news to you General and request immediate assistance. Naturally I agreed."

General Pettygree: "Well then. The Army will march before sunrise to rescue Bartlett."

Colonel Sinclair: "General. My Seaforths are itch'n tay have at the vexing Thugees more than most an' they're rested. We can leave at sundown and force march arriving in two or three days instead of the four it will take the Army to arrive at the Amla. The laddies can steal a march during darkness just like the Bonnie Prince did in the '45 and...."

Pettygree: "Confound the foe. Agreed. Alright Sinclair. Alert your regiment, march near sundown and take Colonel Preece and his 10th with you. The rest of us will march in the morning," 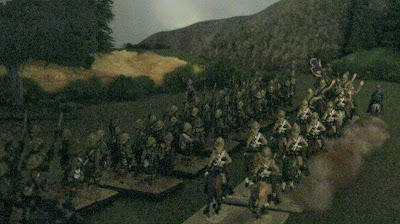 1. The Battle of the Amla was fought on a weeknight evening from 7pm to the turn in progress at 9:15pm.

3. The garrison was in a bad way but there were more doors to knock down.

4. A D6 decided door strength. The western door required six turns to knock down; the eastern door needed only two turns to collapse.

5. The attacking force was decided by Todd and Chuck each throwing 2D6.

6. The Imperial Force was thought to be 41 miniatures but due to confusion it was only 35 miniatures strong.

7. The foe was told to attack from anywhere along the river. They had to cross it. Todd and Chuck cleverly agreed to use cover, cunning and a mass attack to overwhelm Bartlett's western piquet of eight lancers.

8. Rules? Batailles de l'Ancien Régime {BAR} modified for year 1900 AD weaponry and more. BAR is not just a BIG battalion game. The author was satisfied with how the rules worked with under 80 miniatures on the table.

Another excellent report. I have read your blog for some time and always enjoy it.

Great shot of the Highlanders marching out in the dark.

Another great AAR with photos! HUZZAH!