"Torches illuminating the eastern ridge last night were confirmed to be the Tug Army vanguard en-route to give battle. The entire Surajistan Field Force therefore spent a sleepless night deploying and preparing to receive an attack at first light." 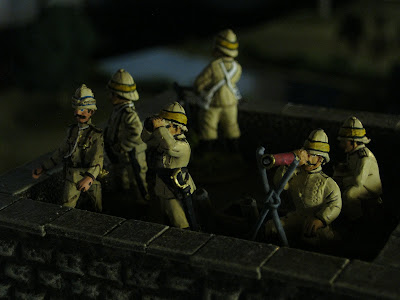 "Near dawn I returned to the village tower and saw nothing." 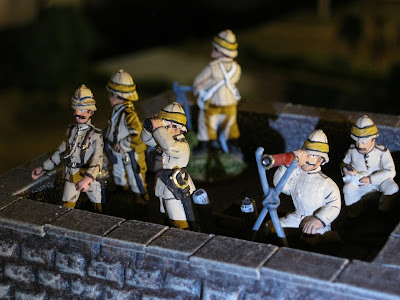 "However, as more light opened the sky, our foe appeared in the distance. They formed at the base of the eastern ridge for perhaps one hour before coming toward us." 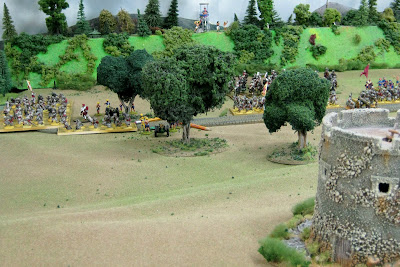 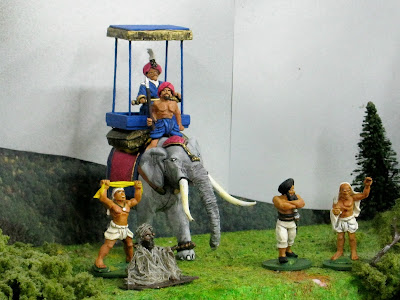 "Whilst enemy senior commanders observed and waved directions from the ridge top." 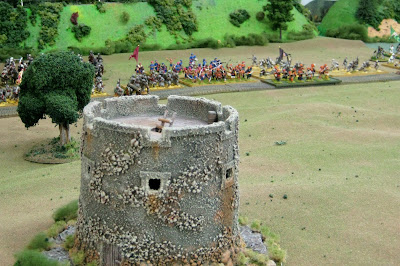 "More infantrymen advanced toward our center. Some were armed with swords and others with combinations of firearms. Cannon were being pushed forward as well. For the moment it looked as if our dispositions made during the night were proper. For example on our...." 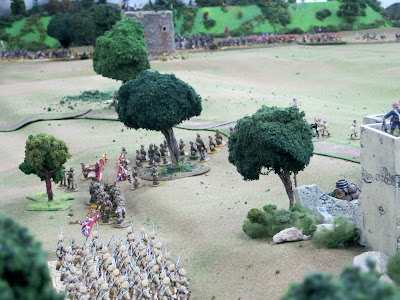 "Left Flank the 27th Bombay Miners and Sappers stood ahead with the 1st Sikhs in reserve." 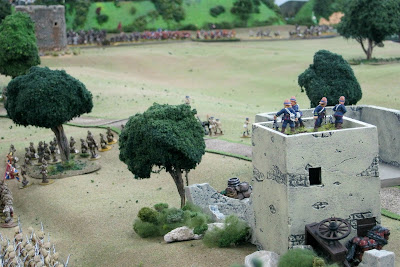 "Our Rocket Section was near atop a building whilst in the...." 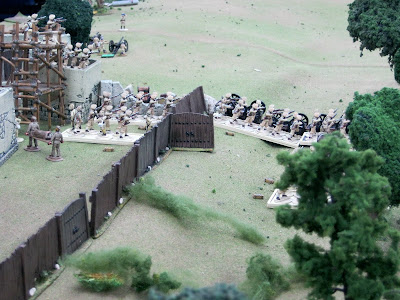 "Center the 2nd. Sikhs maned the eastern wall and behind our overturned supply wagons." 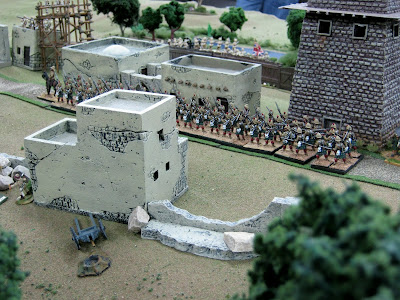 "We had two central reserves; 72nd Seaforth Highlanders in the village and...." 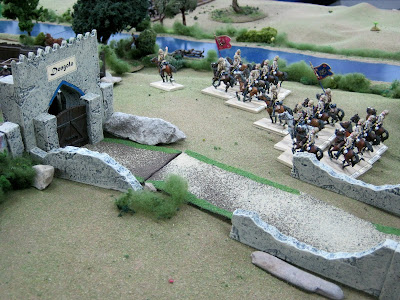 "The 10th Hussars outside the western gate." 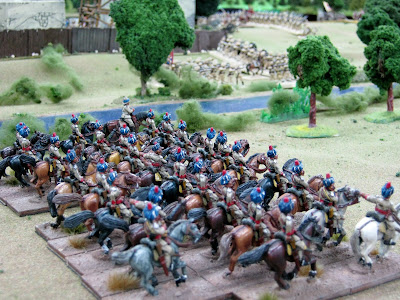 "South of the village and the 2nd. Sikhs - the Guides Cavalry were posted." 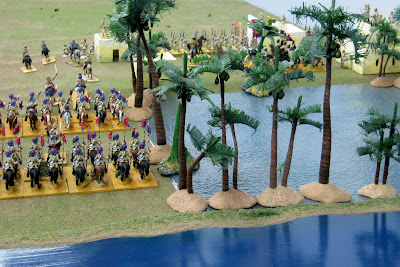 "Our Right Flank was considered to be an independent command. In a small unnamed habitation were three squadrons of the 9th Bengal Lancers and the Berkshires; 66th. Foot. In front was...." 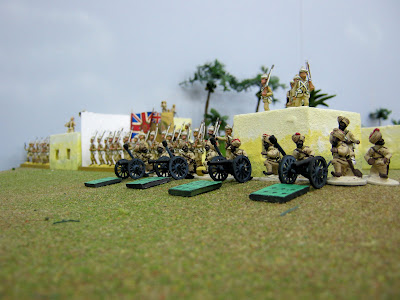 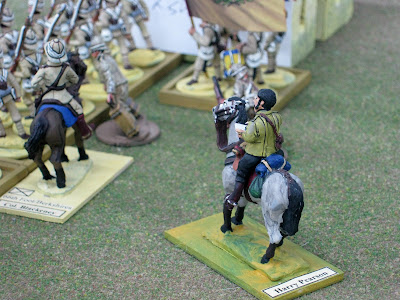 "Our Journalist, Mr. Pearson, would no doubt record the story here." 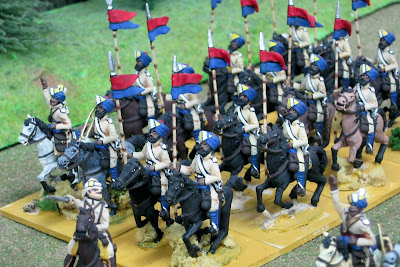 "Captain Gill's 1/9th Bengal Lancers were posted to the rear." 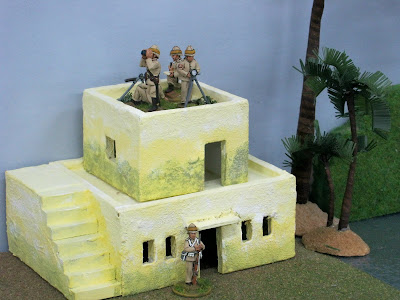 "One of three Heliograph Sections was placed on the roof of the tallest structure to communicate with...." 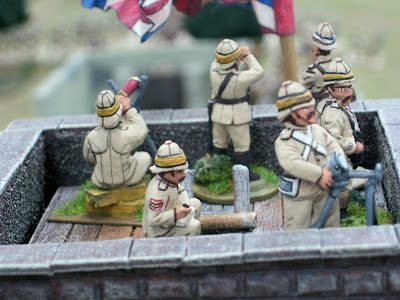 "Another Heliograph Section and me atop the village tower." 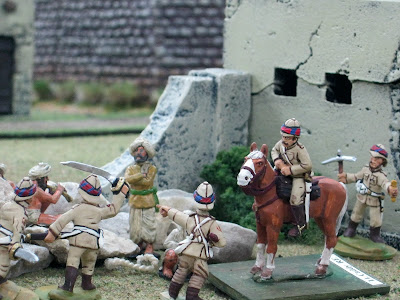 "Dongolo's walls were a shambles due to a recent earthquake. There was barely time for Lieutenant Caddy's Royal Engineers to effect repairs. Most of the villagers had vanished when we took possession of the town."

HERE THEY COME!
EARLY MOMENTS OF THE BATTLE 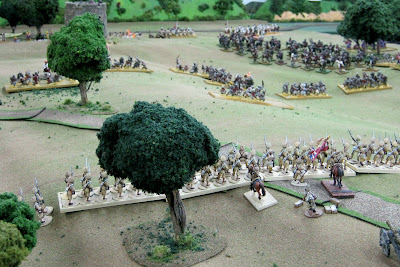 "The foe came toward our left flank without great numbers or vigor. The 1st Sikhs went forward to meet them with volley fire." 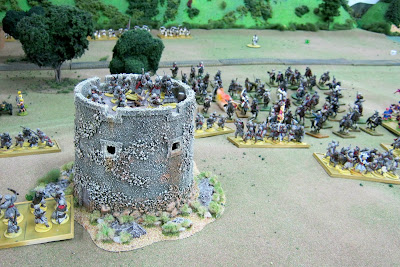 "Their design was different opposite our center." There they were more numerous and crossed the ground between us quickly. They soon...." 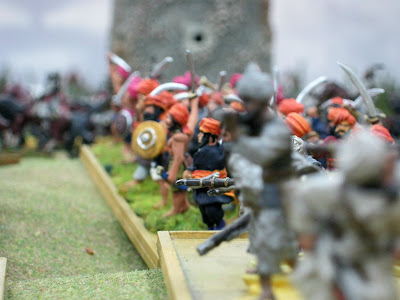 "Came abreast of the eastern tower." 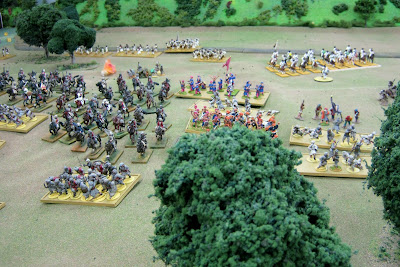 "While just to the south of the tower (off image to the left) even more of the enemy surged forward. Our rockets landed harmlessly. (See the upper left explosion.)" 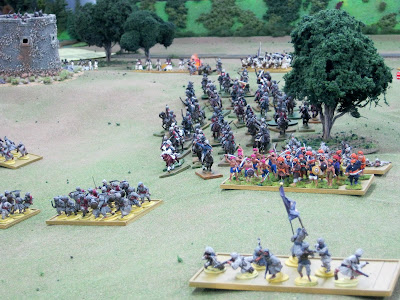 "On they came rushing toward the...." 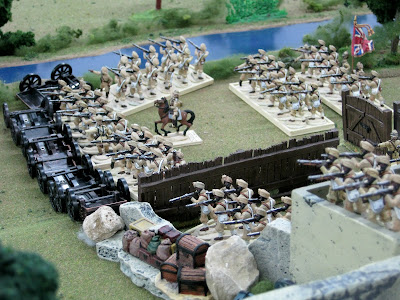 "2nd. Sikhs waiting to give fire." 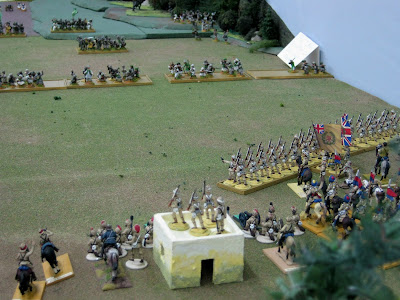 "Off to the south on the Right Flank, they came forward with a screen of riflemen. They appeared tentative after the First Mountain Battery landed several shells amidst them. I noticed the Berkshires moving out to meet them."

"All along the line of battle things were well in hand. Indeed, I doubted the foe had the numbers to succeed anywhere. All was going well. What could go wrong?" 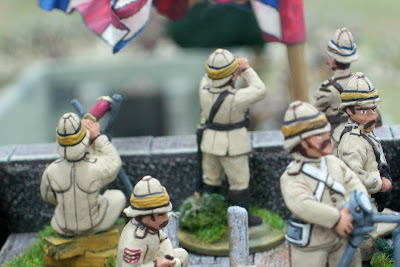 "It was at that moment of optimism our attention was suddenly diverted to the largest dust clouds we had yet seen to the east!"


1) The Battle of Dongolo is being fought on several weeknights. The first game posted on 12 January 2013 showed the Imperial arrival and attack on Dongolo. The second is this post where you have just observed  Imperial deployment and initial native movements. Weeknight sessions commence at 7 pm and end at 9:30 pm approximately.

2) The third session is planned for 23 January. A report will follow.

3) From left to right Chuck L and Keith were our native commanders whilst John B, my son Tyler and I commanded the Surajistan Field Force.

A magnificent display! Bill you've really outdone yourself. I'm very interested to see how this one turns out.

I'd keep an eye on that Pearson fellow, writes for the Manchester Guardian don'tchaknow. The man's practically an anarchist.

As always, excellent stage managing. You can feel the tension grow as the battle develops.

The world wonders just what is in the dust cloud.

Also, were the Guides part of the original Field Force, or have reinforcements reached the good General?

Alan:
Thank you as always for your kind remarks and interest.
---
Conrad:
Thank you too. I'll keep my eye on our journalist - met 'im in a pub you and I frequent.
---
Rob:
You are often kind to comment and you have a sharp eye too! My friend Chuck The Lucky painted the Guides for friend Earl K. who wanted to support our regional gaming efforts. I suggested the Guides which were completed last September. They force marched to reinforce Gen. Pettygree.
---
What is in THAT cloud?
We'll all find out soon methinks.
---
Cheers,
Bill

A great report as always, sir! Figures, terrain, everything. BTW, it's nice to see some of the buildings I made in use by the heliograph team. ;)