Chapter 59: Before The Second Wave

"As the first Tug wave fell back, a second appeared in the distance. Emerging from two gaps in the eastern ridge, three bodies headed rapidly for us. These could put us in a very bad way." 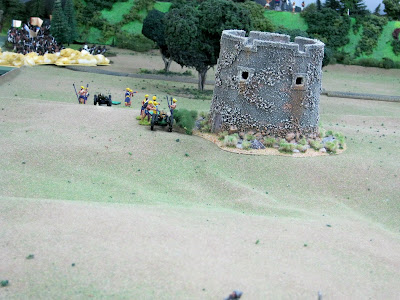 "Would this group turn our left flank?" 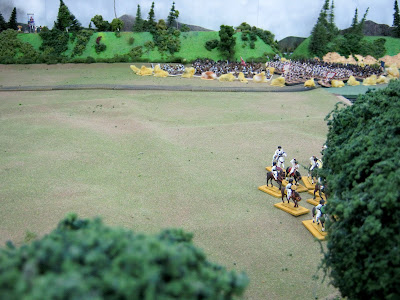 "Could this body bisecting itself severely press our center and right?" 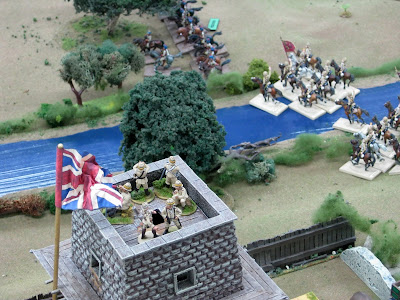 "One of my officers with me in the village tower unintentionally gasped at the horde coming our way. This was a singularly different battle than expected. I resolved we must not fall to join the ranks of Lord Chelmsford of Isandlwana or Chinese Gordon of Khartoum!" 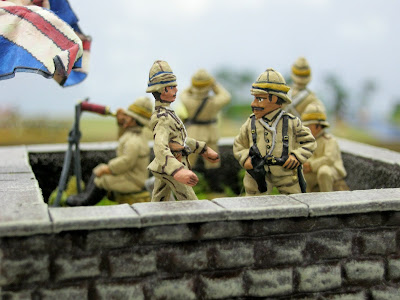 Pettygree: "Lieutenant Bracegirdle. I desire to send a heliograph message to south flank, if you please." 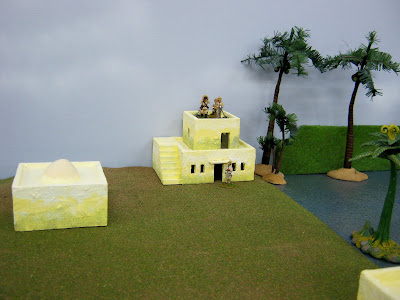 "Only the heliograph team remained in the small habitation to the south; our right flank. The garrison had earlier moved to the left to engage and scatter light Tug forces before it was known heavy enemy reinforcements were coming." 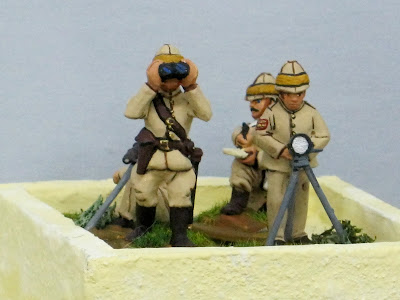 Lt. Hunter: "Message coming in.     Withdraw cavalry to the plain west of Dongolo and wait for orders.     All others retire into Dongolo immediately.     Send acknowledgement Corporal Belle."

Hunter: "Right. This place will soon be untenable. Alright men get the orders distributed, pack up and let's get out of here - double quick." 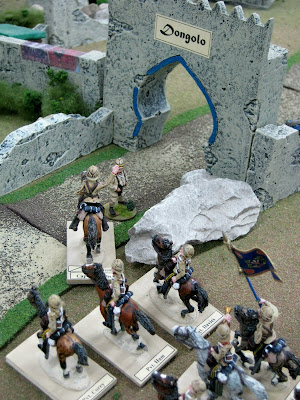 Pettygree: "Captain Sach's 2/10th Hussars was the first to arrive on its way to the western plain. I sent Lt. Bracegirdle with orders for the cavalry to take to Colonel Keene's Rear Guard a day's march to the west. I obliged him to read it aloud so all the troopers would hear and understand it's vital importance." 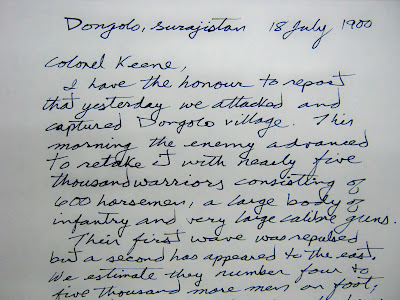 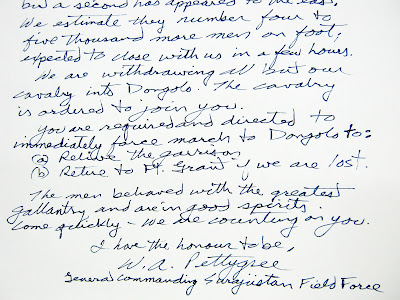 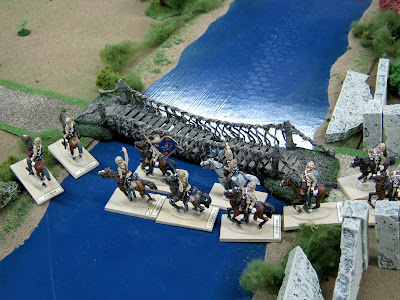 Pettygree: "I watched the hussars depart to the westward." 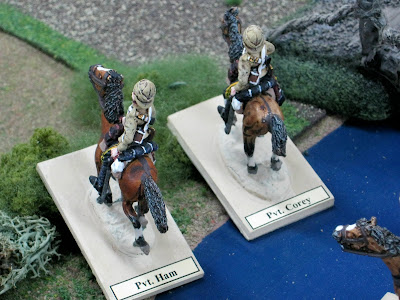 Trooper Ham: "Well mate, we have a spot of bother, eh?"

Trooper Corey: "Make no mistake, my dear fellow. This is the most important duty of our lives. We can't let the General and the Column down!" 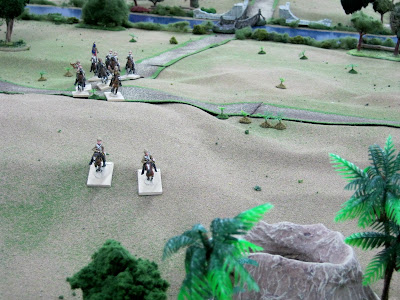 Trooper Ham: "Let's be on our way then. Wot's this? Blimey, a volcano?" 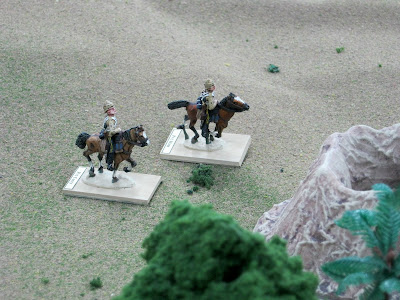 Trooper Corey: "Out of the frying pan into the fire, you might say. It's asleep though."

Trooper Ham: "Dormant! We can be thankful to Heaven for that!" 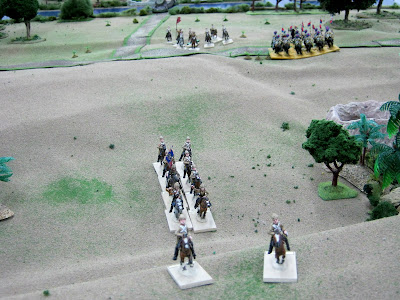 Trooper Ham: "Here comes the rest of the cavalry. Following us naturally."

Trooper Corey: "Aye, but strangely not all of it." 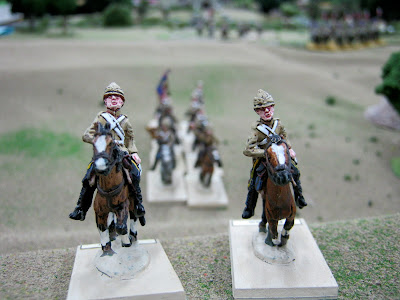 Trooper Ham: "I have a bad feeling about this Trooper Corey."

Trooper Corey: "Such as we should not have left the battle?"

Trooper Ham: "Something like that but orders is orders. Onward mate to Colonel Keene."

Trooper Ham: "The fate of The Column back there rests on our shoulders."

1) HG Walls built the two towers plus the tallest trees, Dongolo structures plus the foot bridge are from Miniature Building Authority and the table covering plus stream were custom built by The Terrain Guy. Flag Dude made the British flag and pole. The 2/10 Hussar guidon is a GMB's Napoleonic flag. Friend Chuck L. made the lovely roads.The latter are made from felt and stick to the table covering exceedingly well.

2) General Pettygree is a 30mm Willie. Lt. Bracegirdle I think is from Essex. Isn't Bracegirdle a marvelous name? A Bracegirdle appeared in the Hornblower television series some twenty years ago.

3) What do you think? Will Troopers Ham, Corey and companions successfully reach Colonel Keene's Rear Guard? Will the defenders of Dongolo be overtaken as Gordon was at Khartoum? Will Colonel Keene arrive in time to make a difference? Your answers or remarks about anything in the story are welcome below.
--------------------
Posted by Gallia at 3:22 PM

A cliffhanger worthy of the Saturday morning cinema.

The story prompted a few thoughts,

I have never been to India but your Roads stretching out over a dusty plain reminded me of news films that I have seen. Very atmospheric. Often done for a magazine cover but I have seldom seen such a large table look so good.

Writing orders is a neglected skill for wargamers. Long and detailed is fine eg Napoleon, short not so good eg Balacalva.
But short and clear? Wellington was a master, I remember reading at the Army Museum his note written as Hougoumont finally caught fire, masterly and genuinely made the hairs on ones neck stand up to see the original.

thanks for a thought provoking episode.

Things look dark for our brave lads, but a good rifle and a sharp bayonet with guts behind it has saved the Empire on many an occasion. Steady up, lads, and volley fire!

I've seen your collection grow over the past couple of years and I think that I see some new figures every time you post a new report. The depth of auxiliary and support figures and vignettes really bring the miniature battle to life.

Pray for God, plenty of ammunition and Colonel Keane.

Yet again, another great AAR with photos! Always look forward to your bolg!

The story goes ever on. Excellent illustrated report as always.
(The name Bracegirdle is not unknown in The Shire either)

Sirs,
Your interest in the Generals fate and story is gratifying. The second enemy wave has arrived and is in full force. Lest circumstances intervene, tonight's game session should see the result. Thank you very much for your remarks and constancy.
Respectfully,
Bill

As always a splendid campaign worthy of her majesties finest. Love the narration and written orders. Thanks for posting ... & good soloing ...Jeff