Chapter 60: To The Rear Guard

"The Battle of Dongolo appeared to be going badly for The Column. Therefore, during a respite, Major General Pettygree ordered all but the cavalry brigade into the walled village. My regiment in company with the entire cavalry brigade were ordered to the westward to find and bring Colonel Keene's Rear Guard to the rescue." 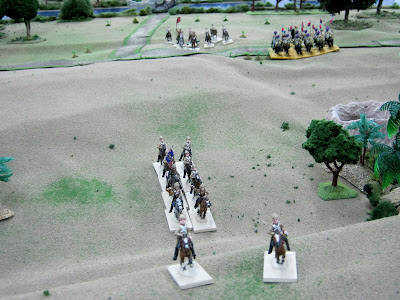 Trooper Ham: "The odd thing was my 2/10th Hussars was only one of two squadrons appearing to follow that order. One squadron of the 9th Bengal Lancers was near but never joined us. Only Colonel Preece leading the 1/10th Hussars would eventually combine with us. (See: Red guidon top center) The rest of the brigade I later learned disobeyed orders to remain behind for reasons not known to me then." 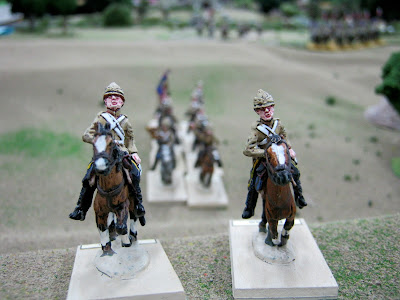 Trooper Ham: "And so my comrade in arms Trooper Corey and I led the 10th to find Colonel Keene and bring him to Dongolo or should the worst occur, back to Fort Grant if The Column was lost." 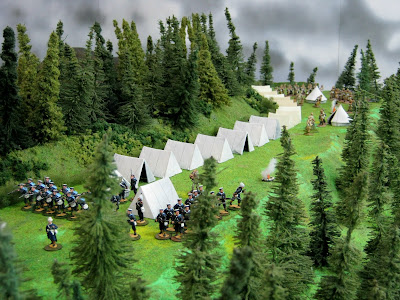 Trooper Ham: "Colonel Keene's encampment was a day's ride away atop of ridge surrounded by a vast pine forest. The west end was occupied by Captain Jellicoe's naval shore party. The Lincolnshires camped at the east end." Trooper Ham: "The Gatling Gun would come in handy sure." 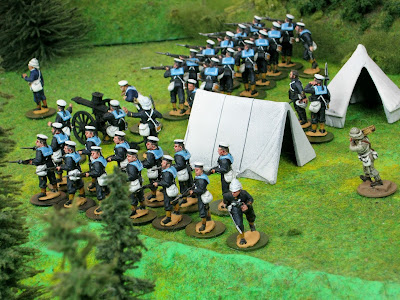 Trooper Corey: "Aye they were a fine lot - very smart - for sailors."

Trooper Ham: "I'm guessing they heard cannon fire from Dongolo and stood to. They might have been anxious seeing dust in the valley below raised by our two squadrons." 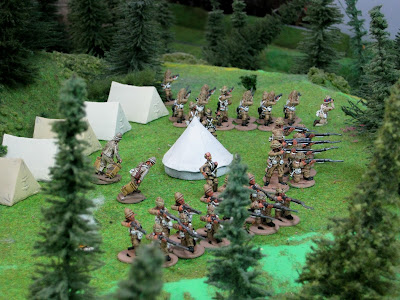 Trooper Corey: "The Lincolnshires formed up as ammunition was being brought to their firing line when...." 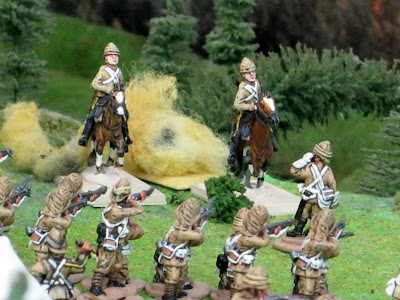 Trooper Ham: "We rode into camp. The Lincolnshires being a new regiment appeared nervous but ready for business."

Trooper Corey: "Urgent message for Colonel Keene from the General." 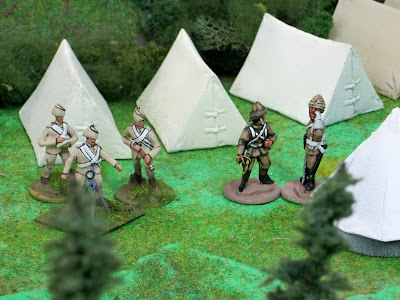 Trooper Ham: "Colonel Keene was in the center of the camp." 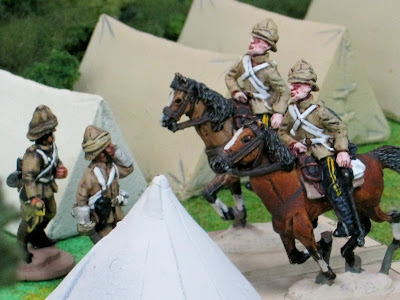 Trooper Corey: "Them Tugs brought on a prodigious battle Colonel. They had some large calibre cannons and ours fired smart replies back at 'em." 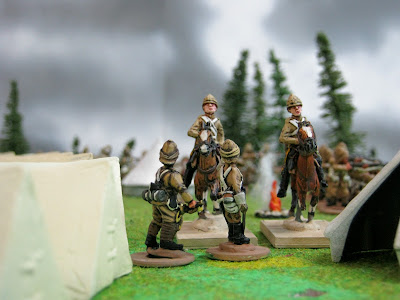 Trooper Ham: "Orders Sir are to immediately march to Dongolo to relieve the garrison or if it is lost to retire to Fort Grant."

1) Tents with the naval shore party are Renedra which I bought from: http://www.architectsofwar.com/plasticterrain.aspx

2) The others with the Lincolnshires are pup tents are from Miniature Building Authority. See: http://www.miniaturebuildingauthority.com/products.asp?cat=Direct+Terrain

4) The next post will describe the The Battle of Dongolo conclusion.

I like the naval landing party, very smart looking troops.