Diary of A Subaltern in the Sudan #2

Our scout of the 21st. instant found a Dervish screen south of our post at the village and ruins of Akasha. Thinking the enemy mighty bold being this close to us, General Shearing resolved to take most of the garrison out to punish their impertinence. After a hearty breakfast on the 23rd., the Column marched to the ruins where Freddy Grandmaison and I had just been two days before. The distance was not far. 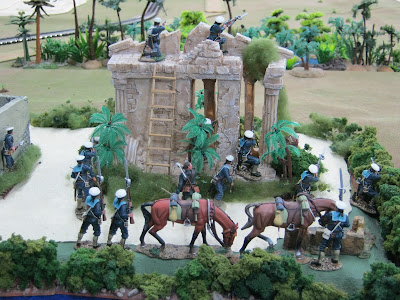 We were assigned to Colonel Burnaby's Advance Guard given our recent familiarity with the ruins. He spread out our twenty-three sailors demanding they have a care to take cover. 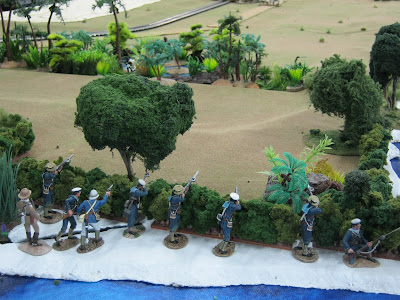 Freddy and I were posted on the extreme right flank.  High bushes along the bank of the Nile River covered us well. Some of the detachment that had been with us before noticed observable Dervish were more numerous today. I thought they meant to falsely taunt us showing themselves so impudently. Our vigilance was high and our weapons were loaded as.... 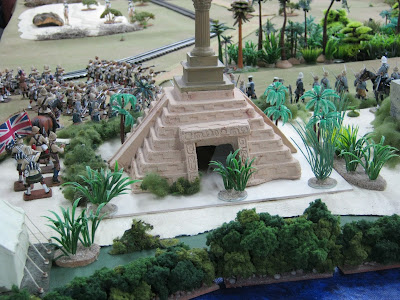 General Shearing brought up the Main Body on our left. Surely the enemy's bravado would evaporate not because of the blazing morning heat but because they might now comprehend our overwhelming numbers. 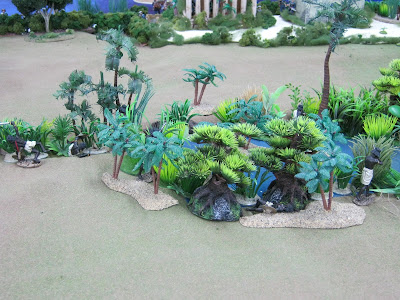 They could not hope to delay us more than moments once the order to advance came. 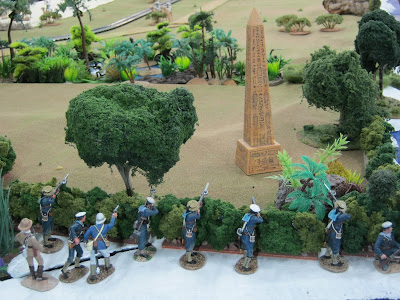 We awaited Burnaby's order to open fire and advance. 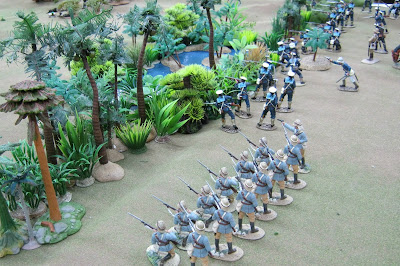 When the order arrived, we fired and quick marched to the oasis supported by dismounted Camel Corps on our left. The Dervish remained strangely silent. 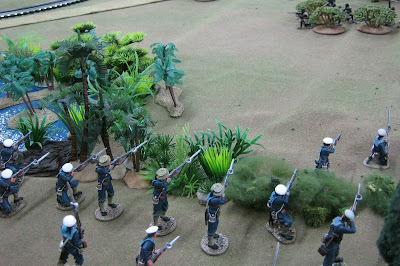 They fled to low Mimosa trees. --- We had them! 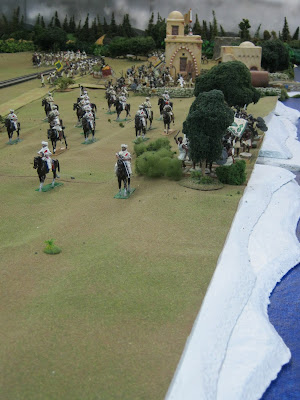 But our cheering overconfidence immediately vanished when clouds of Dervish abruptly erupted from the Village of Firket in the distance. 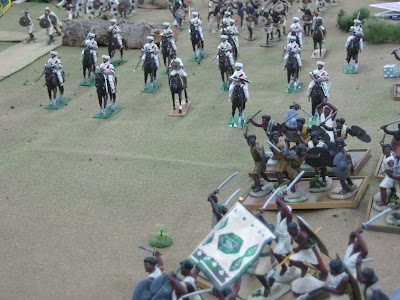 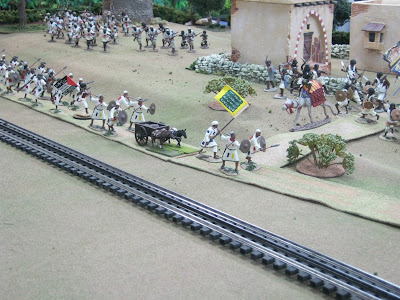 On they came with a vengeance. 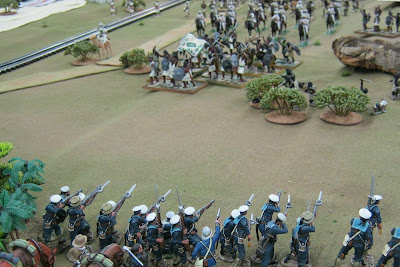 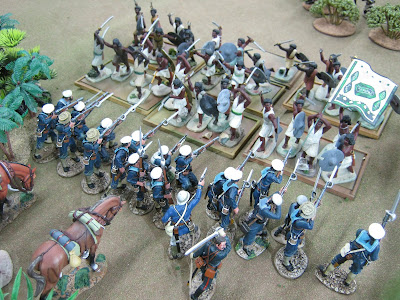 For a time they faltered and we fell back to cover. Along the way Burnaby shouted to Freddy and I, "Get mounted! Gallop to General Shearing, report and ask for help." 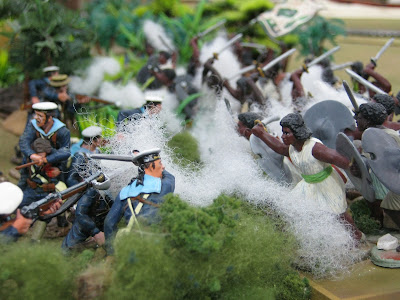 But too soon the maddened foe was in our midst shouting and chanting with blood lust in their eyes. 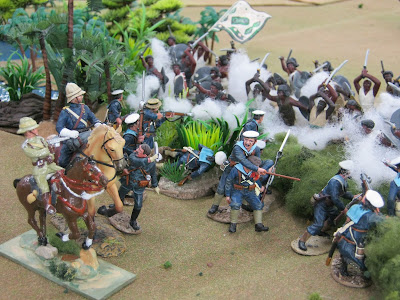 I remember the Colonel's exhortation to this day. 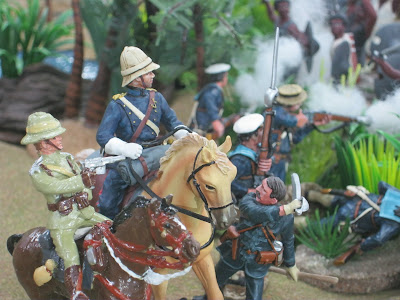 Churchill, Grandmaison! Tell the General we've lost the right flank.
Off with you! 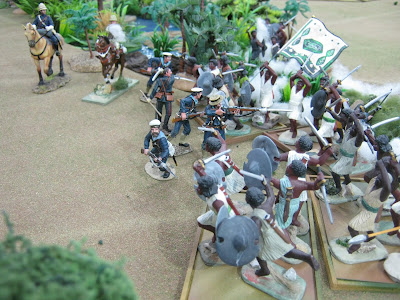 I would not leave without a few parting shots in support of our brave tars.
Could I really abandon them? 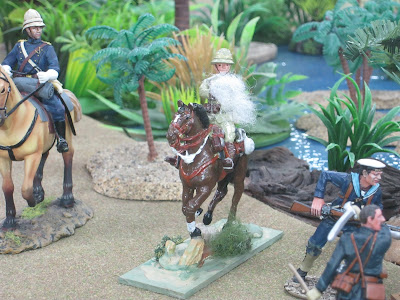 One, two and three shots found their marks but nothing except a miracle could stem the Dervish tide.

Over the cacophony of battle I barely heard Freddy demand, "Winston!" I knew what he meant. I daresay he was right to remind me for had we not left, an instant later we would have been overcome. The consequences of our demise would undoubtedly place the whole Column in jeopardy of collapse. As I turned whipping my horse into a gallop, Burnaby was last seen hacking away at a fierce Hadendowah tribesman bent on his destruction.

1) Is this the end of Burnaby, Churchill and Grandmaison? Indeed, what will become of the flanked Main Body of General Shearing?

Very good indeed. I like the smoke in the bushes.
I wish I had the space for 54mm. The figures have presence.

Great stuff. I do hope Winston survives and we aren't reading his last scribblings as he died.

Wonderful report Bill - always a pleasure to see so many wonderful 54mm figures.

Until acquiring 54mms last year, the eye-appealing nature of gaming with them was not on my radar screen. Photography is easier too as is getting right in there with them in close-ups. Personalities come more alive too. Thank you for noticing this, making kind remarks and your interest. It's a different kind of fun.

One thing about this is moving individual miniatures. It can be time consuming and reduce the number of game turns that can be played. In the interest of saving time, everyone gets involved moving miniatures controlled by a player - when needed. Hey Charlie, will you move these thirty Highlanders for me while I move my cavalry? Something like that. This saves time and keeps more people active because we play games to move units and throw dice among other things.