Chapter 2
Half a League To The Fort 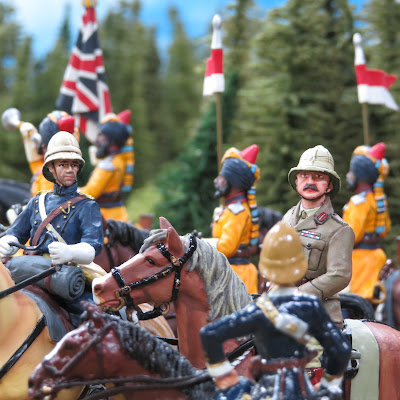 "General, I have a dispatch from Fort Albert, Sir."
"Read it Lieutenant Baileigh?"
"Yes Sir. It says...." 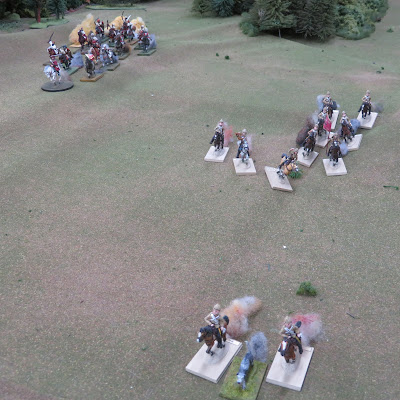 "Captain Bartlett galloped his squadron the last league into Fort Albert."
"Galloped? Is that all?"
"Yes, General." 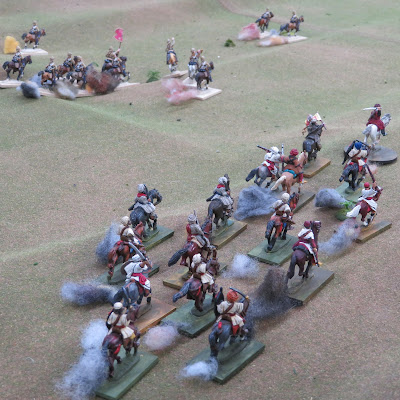 Back to Troopers Corey and Ham leading the squadron.
"Who are those infernal riders pursuing us?"
"It's Ragnar Khan's horsemen more than likely my dear Corey. Who else could they be? Anyway, we have our orders to lead our chaps into the fort." 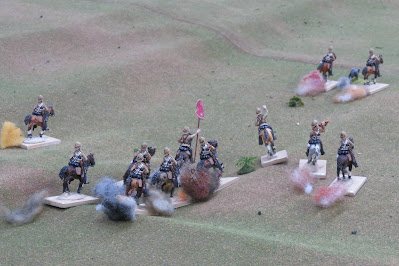 "To the gallop then! I hope we make it," shouted Corey. 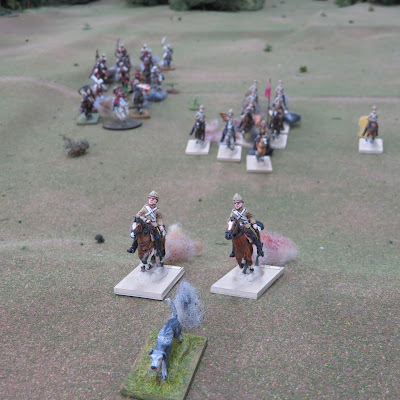 "We'd better or our game will be up! Look at Jack go. He's having fun," said Ham. 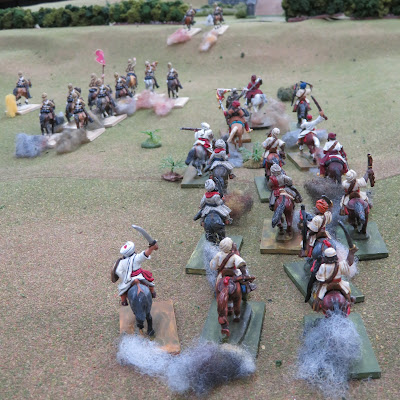 "They are closing in on our chaps," continued Ham.
"Should we turn about and give 'em some carbine fire?," asked Corey.
"Yes, turning now on this rise of ground."
BOOM! -- SHOCKWAVE -- REVERBERATIONS
"I'm almost unhorsed. Susan, steady girl. --- What was that blast?, asked Ham." 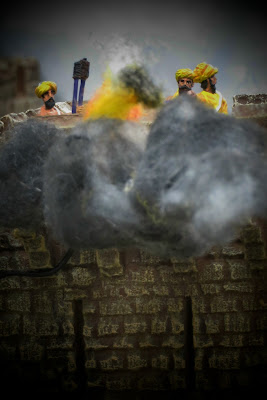 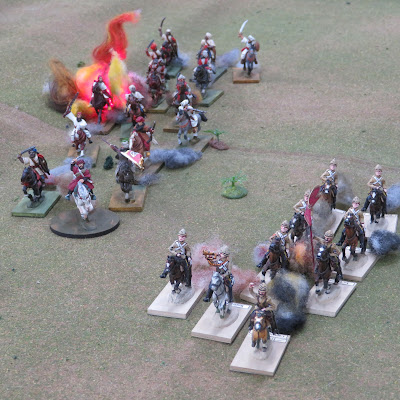 "No! An explosive shell landed to the column's right. Was it a miss or....? 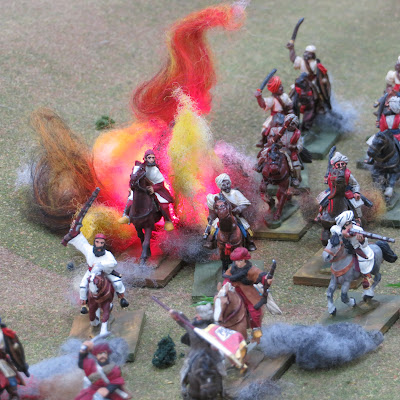 "Unknown. But, a welcome piece of luck," said Corey.
"And a fatal surprise for Ragnar Khan's men whether intended or not. Let's keep going forward," said Ham.
"Say, isn't that....?" asked Corey. 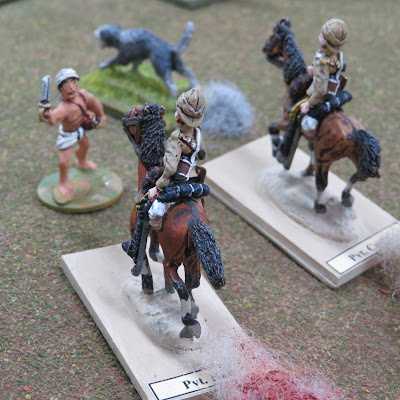 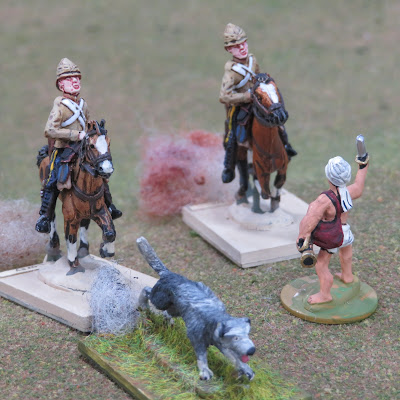 "No time for that Gupta! Ragnar Khan's men just blew up the tower and his horsemen are behind us," bellowed Corey. 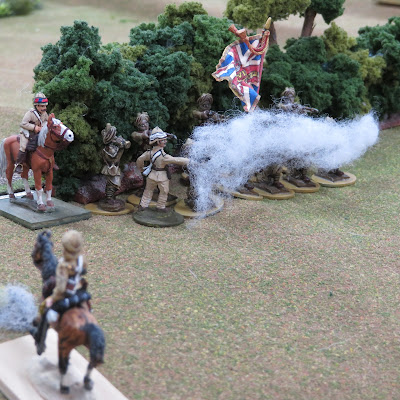 "No trouble, Sahibs. All is right. That's our cannon in the tower and the 27th Bombay Miners and Sappers just stepped through the hedge there with Captain Caddy."
A moment later a section of the 27th fired a front rank volley at the enemy riders. 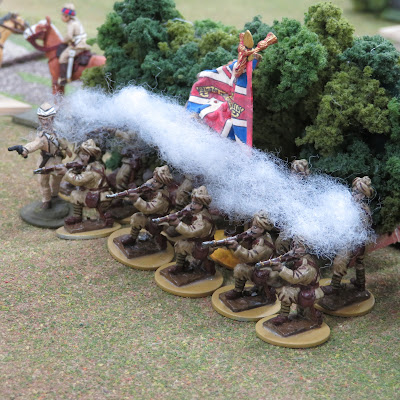 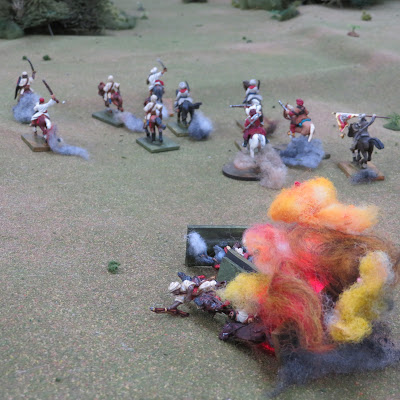 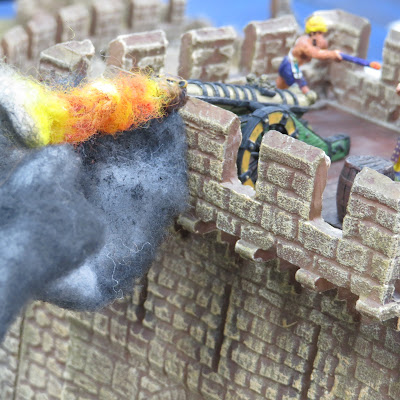 Followed by a complimentary shot from the Lion Gun. 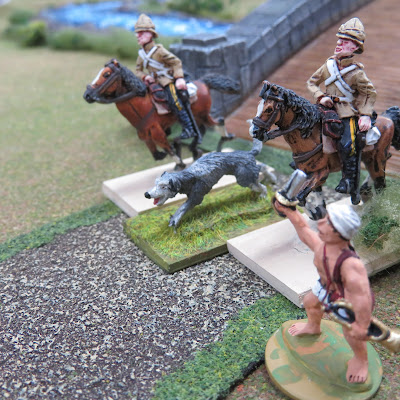 "I never doubted the outcome. --- You, Corey?"
"Certainly not. Our game ain't finished. Here's the Captain." 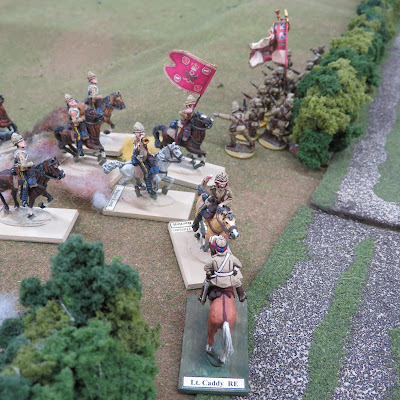 "Captain Caddy, Royal Engineers! I've never been so...."
"All in a day's work, Sir. Welcome to Fort Albert." 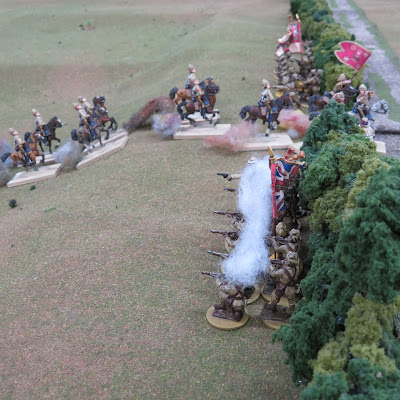 A final volley ended the affair.
CLOSING REMARKS
1. Also see: Chapter 1, At The Gallop
https://generalpettygree.blogspot.com/2022/09/empire-of-wrath-chapter-1.html
2. Chapter 3 Fort Albert is completed. It will be posted near October 15, 2022. We look forward to seeing you return for this next exciting installment of Empire of Wrath.
3. Thank you for your interest and approbation.
4. Meanwhile, your comments are welcome below at Post a Comment.
Posted by Gallia at 10:21 PM

An excellent piece of work.
It reminded me of the Hotspur comic of my long ago youth and also the Wolf of Kabul

This is great work! I appreciate all the work you put into this very much.

I really enjoyed this having been a Captain Caddy [twice - in two armies or three if this is me in miniature!], my father was a Captain Caddy, as was his grand-father.
cheers,

Remarks From Elsewhere:
-----
Love it! Regards Kurt.
-----
Well done. Always look forward to the next installment. Bob
-----
Excellent storytelling. Well done, Bill! Jim F.
-----
I continue to enjoy your tales. Your imagination is unbounded. I hope you and your extended family are doing well and I look forward to when we can again meet across the gaming table. Take care, Earl
-----
So nicely photo staged pics with your usual vivid narration! And I like the explosions! Cheers! dinthedin
-----
Ragnar Khan? With a name like that, a “23 and me” DNA test would have interesting results. John C.
-----
I love your postings, Bill! Your blog is top notch as well. 8-) Roger B.
-----
Always a joy reading your adventures. Mark
-----
A great story, told through magnificent photography - as always with General Pettygree. I'm looking forward to future episodes. Rick
-----
Thank you, Everyone,
Bill P.

Excellent account... with your flair of writing and accompanying photos, it like we are there! Looking forward to the next issue. Lewis

Your very kind and engaged remarks are gratefully received.
Thank you for taking the time to write your thoughts.
Respectfully,
Bill P.

Is there a way to see all the general pettygree stories?

Hello Montbrun,
Yes you can find General Pettygree stories:
-----
Scroll down through the blog.
For multi-part stories scroll down until you see Chapter 1 or some similar reference.
Finish it.
Then scroll up past the one just read to find the next installment.
Awkward, I know.
Usually there are no more than two stories.
-----
Look at the left side of the blog.
Scroll down (not far) to find:
The Complete Expedition To Alexandrapour. Read It Again or for the FIRST TIME!
You can click on all chapters as time permits.
-----
Your interest is appreciated.
Thank you,
Bill P.

Thank you very much!

Half a league? Doesn't seem that far but look what happened to the Light Brigade.