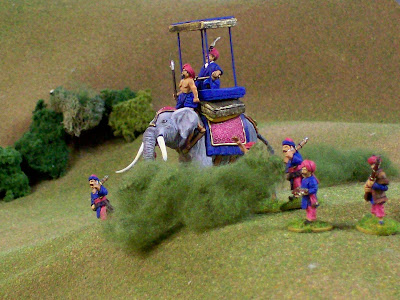 The Rajah of Bebara returns to reclaim his village. 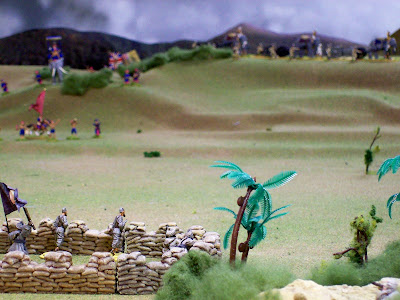 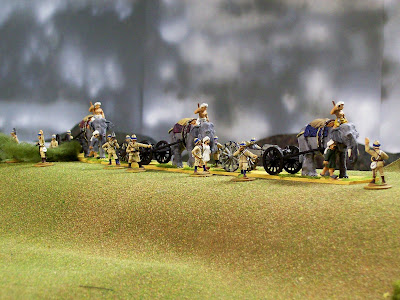 The Rajah is off screen to your left.
Imperial Left Flank: The elephant battery arrives. 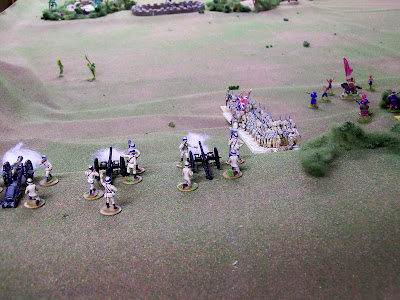 And commences fire. Below three companies of 1st Sikhs are descending the ridge. 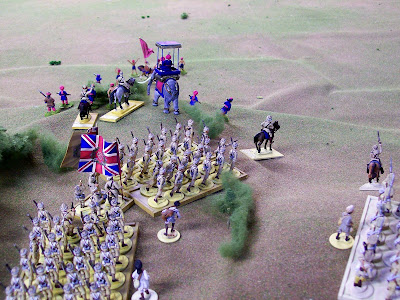 Imperial Center: The Berkshires (66th Foot) and the other half of the 1st Sikh's arrive. 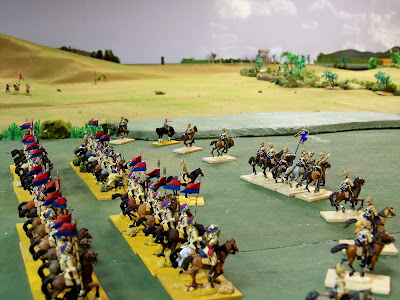 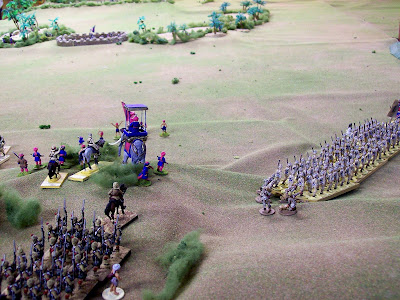 The Berkshires are followed by the Seaforth Highlanders, 72nd. Foot. General Pettygree is beside the Rajah. 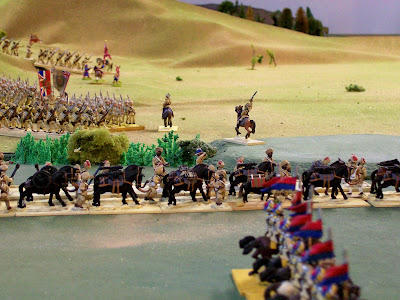 The 1st Mountain Battery deploys left of the lancers. 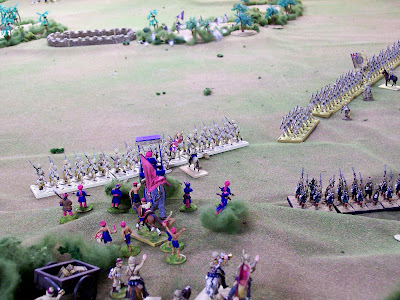 The battle line is formed. 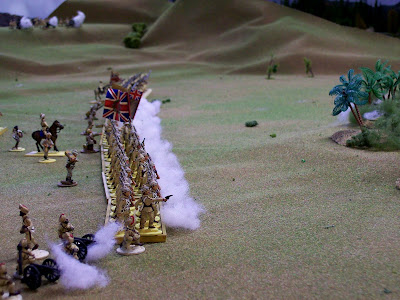 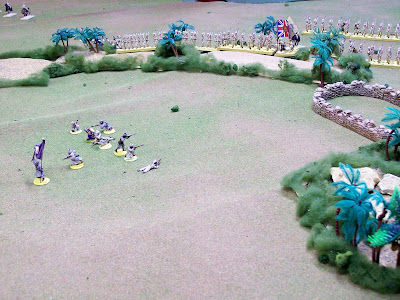 We turn around to see the action from Bebara. After several rounds the foe leaves his forward defenses. 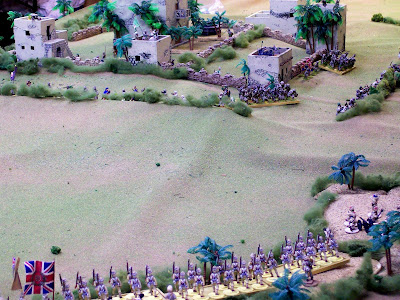 The Berkshires view the foe's second line of defense; a small rise with vegetation brought there to provide extra cover. Meanwhile look at the Green Sash swordsmen facing the mountain guns. 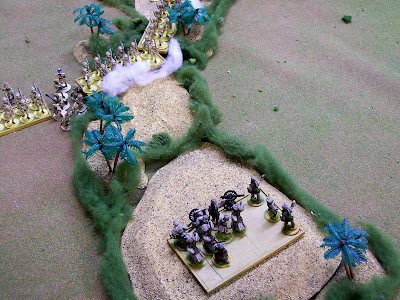 Surprise! They charged and took the guns; the crew evaded. 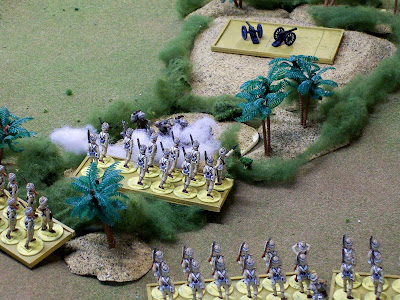 The charge continued into the Berkshires! The Imperials commence rapid fire but this does not stop their opponents. Both sides lose four in hand-to hand combat. A tie. However, at this point the Green Sashes have now lost more than 75%, must check morale because of this and thereafter flee. 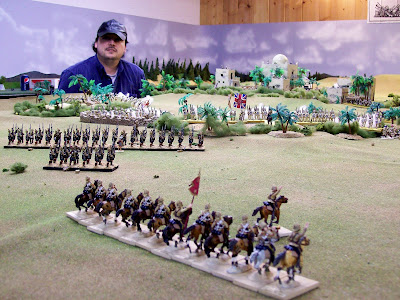 KHAN (Chuck) commanded the natives. It may be dawning on the Imperials, the defense was light. And...?
----------
CLOSING REMARKS
1. The game lasted three hours; perhaps ten turns.
2. We may need three sessions. Session #2 should be on the 12th. instant.
3. Imperial Losses:
Berkshires (-15) and 10th Hussars (-3).
4. KHAN's Losses:
Green Sash Swords (-14), Green Sash Muskets (-7), Arty. Crew (-2), Grey Sash Jezails (-26), Bebarian Arquibusiers conscripted into the Grey Sash Jezails (-5).
5. Tents and Seaforths kindly on loan from Der Alte Fritz.
6. A few extra photos are below though images above tell the story well enough. 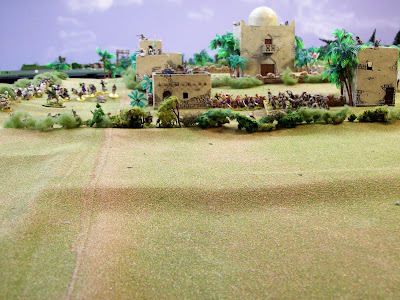 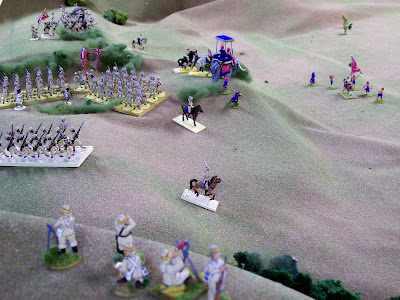 The highest point overlooks the arrival of the Imperial Army. The heliograph team is in sight of the baggage and medical camp a mile plus to the rear. 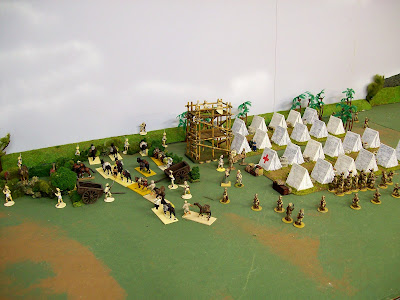 The baggage and medical camp. 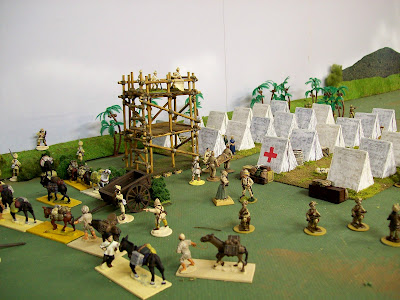 Close up of that camp. One company of 1st. Sikhs and the remnant of the 27th. Bombay Miners and Sappers guard the camp. The 27th previously took heavy losses. See Chapters 13-14. 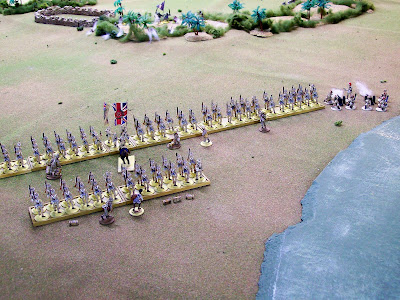 Another view of the early battle line formed to attack the foe's first line of defense. There was no intention to stop the Imperials at this stage. Slowing their advance and causing attrition was the plan.
----------
Comments welcome below. Click on the word comments, if you please.
----------
Posted by Gallia at 7:01 PM

Bill, I sincerely hope that this is at least 1/2 as enjoyable to put together as it is to read. Even more welcome today as I lie in my sickbed (malaria perhaps or Yellow Jack, surely something more romantic than a common cold or flu). Thank you agin, Ross

(Not a very erudite comment, perhaps, but descriptive of the enjoyment I received from your post.. :o)))

Having returned from our travels, I'm catching up on your posts. What a great read! Looking forward to continued episodes.

Hi Ross,
Yes this was and remains fun. It all hearkens back to Don Featherstone plus Jack Scruby and their earliest writings about these kinds of things. However, here we are in 2009 using electronic stuff instead of hand-written notebooks. I have one of those but the main deal is recorded on this blog.

Get well soon!
-----
Thank you everyone for your interest and appreciated remarks.
Respectfully,
Bill

Marvelous work, redolent of Featherstone's writing! The figures and terrain are excellent.

It looks like you are doing something new with regard to ammunition supply. I see little ammo boxes next to the Imperial infantry. How does this work?

BTW, another wonderful tale presented on your blog.

Ammunition Boxes: Thank you for the question Der Alte.
-----
The boxes and soldiers working with them are 28mm from Redoubt. Chuck did a very good job painting all of these for me. Otherwise they might be languishing unpainted in a box of lead!
-----
Chuck painted enough so that the Army has a reserve supply in a cart behind the Rajah of Bebara. It's a long walk back there to get more ammo.
-----
The idea is adapted from our Peter Gilder Sudan game system. Adapted is a key word. Experimental is another since this is our first try.
-----
An infantry unit receives one box for each 12 man company plus one more. Thus, a six company battalion receives 6+1=7 ammo boxes. Theses are for any company who needs it and whenever it needs it. It does not matter where the box is so long as it is in the general area of the battalion.
-----
Routine fire does not consume ammo though we might get to this someday. Rapid fire does. The rule at the moment is whether one company or all companies rapid fire in a turn, one box is removed.
-----
Mathematicians will object to this numeric anomaly but it seems to work okay as a kind of control and helps prevent record keeping.
-----
One other new rule. Natives receiving "significant rapid fire" must check morale. Significant = 24or more soldiers rapid firing. rapid fire receives a +6 shooting modifier.
-----
Respectfully,
Bill