Date: 14 September 1899/2009
Location: Bebara.
Situation: The Battle Continues
By The By: See Chapter 22 for the start of the battle, if needed.

Clicked Images Will Fill Your Screen
And now.... 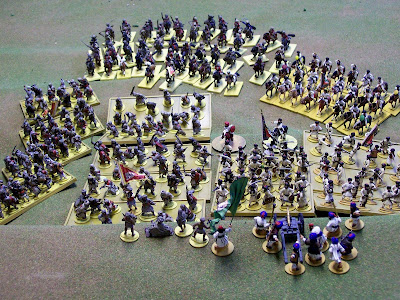 The seated Muljadeh's raised hand silences his followers. On his right the Guru speaks.

Guru: "You hear the battle raging my brothers. The khakis came as I foresaw. Now complete my vision. You are the hammer with which the khakis will be smashed on The KHAN'S anvil at Bebara. In silence go to your secret positions and on my given 'sig ah nahl', rise and attack. Go straight at them and you will prevail! Attack the enemy's right flank and do your duty. Now goooooohh!" 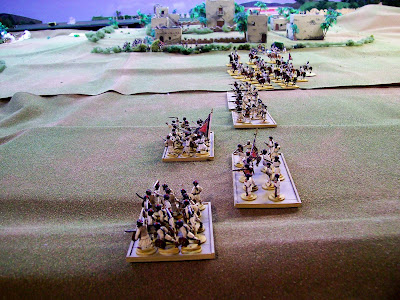 And they did. Household footmen and horse arise from nowhere near Bebara going straight at the Imperial right flank. 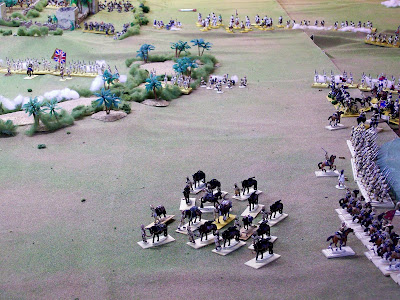 Upper Right: Muljadeh's Household. The Imperial cavalry screen fell back in disorder to escape their galling rifle fire. 2nd. Squadron 10th. Hussars particularly suffered and Major Trevelian was hit. In the lower right you see three companies of 1st Sikhs assume a firing position behind a slight rise of ground facing a different direction because.... 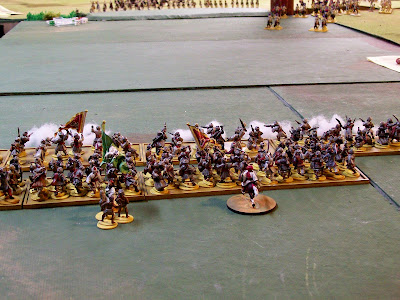 Red Sash rifle and swordsmen arise on a different side of the Imperial right flank. The Sikhs in the distance are covering the cavalry withdrawal with fire. 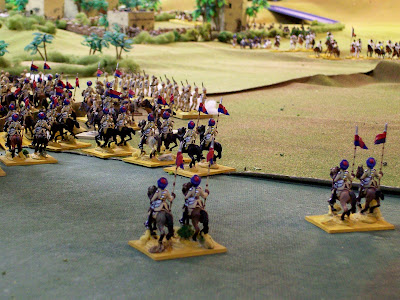 The cavalry withdraws. Official language will call it a rally back. Critics might say a flight. You decide. 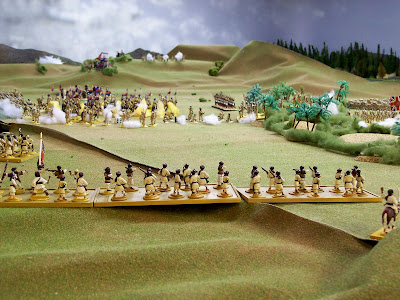 Back to the Household. The Imperial line is trying to stabilize. 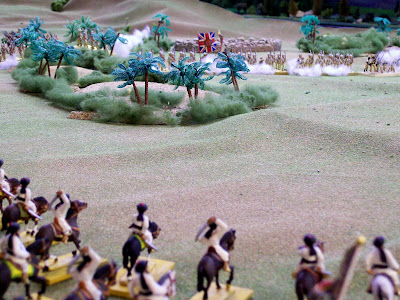 While the Household horse faces the Berkshires in the Imperial center. 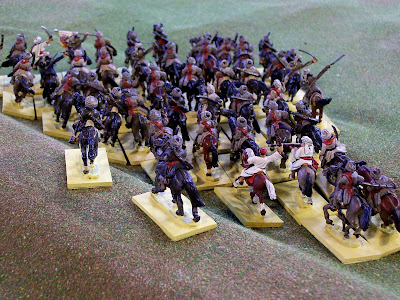 In reserve a large body of native horsemen wait for an opportunity. 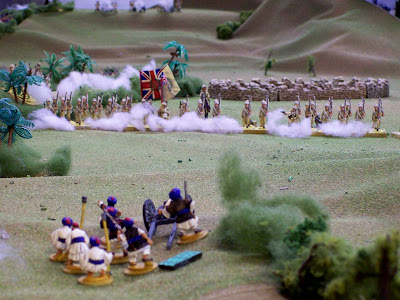 The Household's galloper from the previous century moves forward to give fire on the Imperial center. 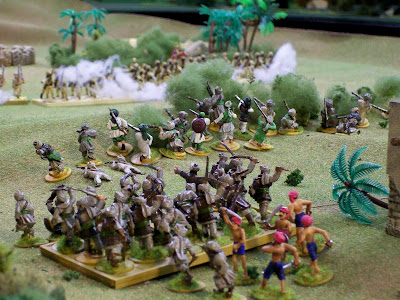 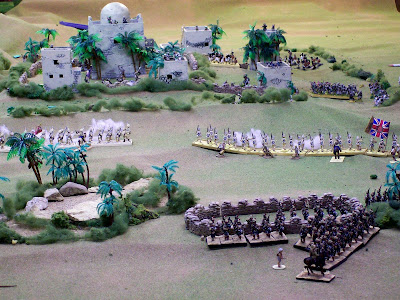 This was the high water mark of the Imperial assault on Bebara. The Sikhs and Berkshires will soon pull back. The Seaforths under Col. Sinclair's initiative have left the center and are moving to shore up the army's right flank. Will they arrive in time? They did not even wait to reorder after clambering over the sandbag works. Hurry laddies. There's not a moment to lose! Faster!!!!!!! 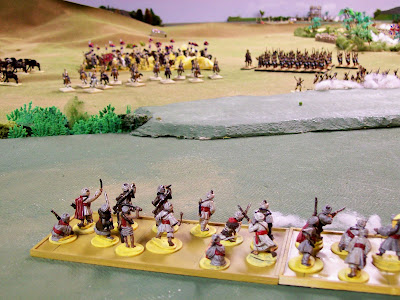 The Sikhs pour "rapid volley" rifle fire into the Red Sashes consuming a lot of ammunition. Will this be enough? Will the Seaforths behind them arrive to save the day? Will Imperial horsemen reorganize and add further strength? 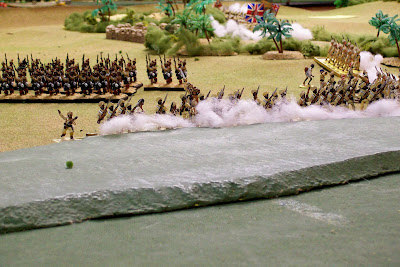 A closer view. Note the "L" shaped bend in the line at the right of the photo. The Berkshire's two flags in the distance mark the Imperial center facing Bebara. 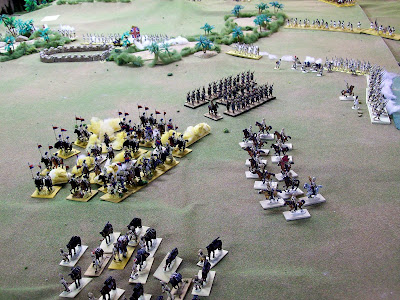 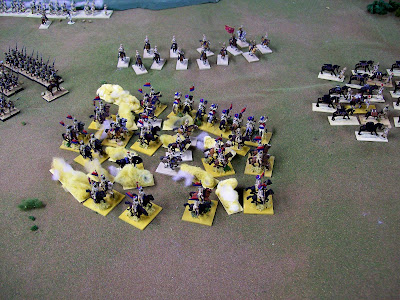 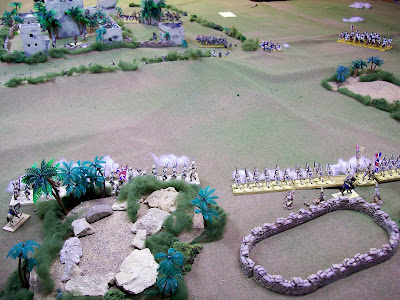 The left of the line guarded by three companies of 1st Sikhs.The center held by more than half of the Berkshires. Other Berkshire companies moved to the right flank to prevent a collapse there earlier. 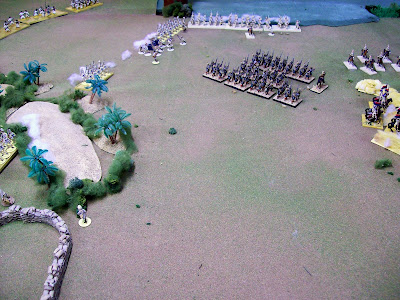 The right flank and the bend in it's line. Thrown back and taking devastating fire, the Imperials are trying to close up for what they assume will be the final assault. Farther away and unseen more than one hundred allies of Muljadeh have cunningly sneaked into Bebara. The crisis of battle is near. The hammer is striking the anvil.
----------
CLOSING REMARKS:
1. The third session resumes Monday 16 November.
2. Muljadeh and The Guru hid the major portion of the native host somewhere beyond Bebara. They waited to attack until the Imperials were committed close in at Bebara. The scenario allowed The Guru (Chuck) to place these warriors no closer than 36" to any Imperial force once the Imperials started their final advance on the village. Chuck chose to attack the weakest portion of the Imperial Army, its right flank. An excellent choice. This simulated the sudden appearance of native forces seemingly popping up out of the ground as occurred in The Sudan. However, this also has the feel of Maiwand.
3. LOSSES:
KEY
(101) Berkshires started with 101 miniatures.
First # = Session 1 Losses, Second # = Session 2 Losses
N/A = Not Applicable in game #1; not present.

Grand Total (542): -54, -64 = -118 and -2 cannons
------------------------------
PS I am reminded of the scene in ZULU where Bromhead and Chard discuss upsetting civilians back home at their breakfasts reading about Lord Chelmsford's disaster. Yours truly hopes his readers will not suffer similar indigestion. Come back next week to find out.
----------
QUESTION TIME?
What similarity is there between the historical Battle of Maiwand and our Battle of Bebara?
Answers, comments, remarks, praise and indignations are welcomed immediately below, if you please.
----------
Posted by Gallia at 11:14 PM

This looks to be a smashing good game . . . and your photos add a lot to your commentary.

I'm sure that I'm not alone in looking forward to the next episode.


Need to fall back towards the guns, I should think, and add their firepower to the rifles.

I hope that the ammo boxes aren't screwed down tight.

Another rousing and well-illustrated report! Leaving us with a cliffhanger. Will the Imperials pull off a victory, or will the natives overwhelm them?

It looks like fun! I can not wait to see what happens next.

Yes, close up with the guns and avoid a bloody debacle like that at all costs, or the Queen (Gawd bless 'er!) will not be amused.