----------
EXPEDITION TO ALEXANDRAPOUR
----------
Date: 26-27 June 1900
Location: Off The Continent of Mafrica
Situation: A Curious Sighting And Landfall
Recommendation: See Chapter III posted 12 June 2011
My Dear Fellow/Lady, Oblige Me By Double Clicking Images
----------
Lt. Col. Lawford's Narrative:
"HMS Zanzibar took us aboard at Bombay departing with such urgency that I did not have an opportunity to meet Captain Collingwood. I was hopeful this would be remedied soon. However, as the days passed at sea, I remained frustratingly unenlightened about our destination and arrival date. Was secrecy this imperative aboard a warship of Her Majesty? All I knew was, on the 26th of June, we were steering a clockwise course offshore of the unseen but nearing continent of Mafrica when...." 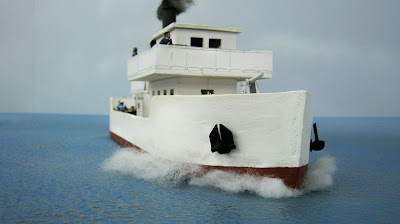 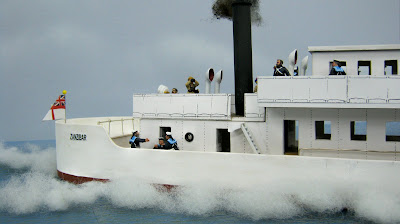 "Increase speed to 18 knots."
Our wake was considerable. 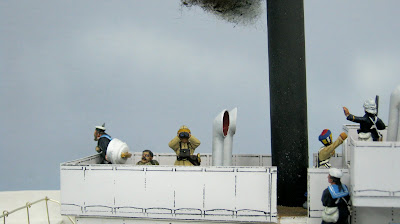 Lawford: "Something had been sighted amidships off to starboard. Fellow traveller, Major Thorpe, trained his binoculars on the object - not making much of it. Nazim, attempted to ascend to the higher forward deck for a better view. He was stopped on the ladder abaft the bridge." 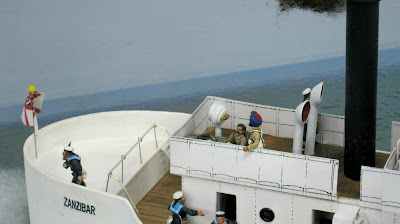 Nazim: "Sah'b, I could not find out why the ship increased her speed nor what might be out there - far away - where kalapani meets the sky."

Lawford: "Officer land up there Nazim - not your province. The chap who was just here looking through his binoculars did not know either. He went to the Captain to inquire." 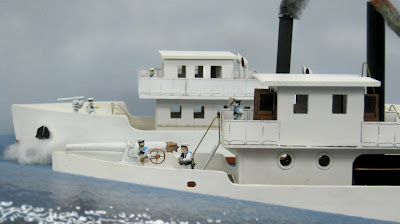 Lawford: "When the answer came, the mystery mostly remained; two gunboats in line abreast parallelling us and steaming fast. They did not fly identifying national colours. Why? Obviously they were not Britannian. Otherwise they would have hailed. Uneventful hours passed and with the onset of night, the running lights of the pair grew more faint with each sea mile increasingly separating us until they vanished." 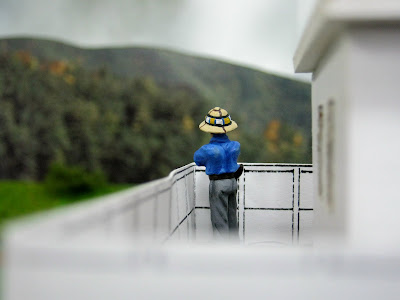 Lawford: "Very early the next morning I was asked to meet Captain Collingwood on the bridge. Ascending there I momentarily paused at the forward rail. We had come inshore during the night. The verdant coast of Mafrica beneath an overcast and rainy sky to starboard was extraordinarily beautiful and at the same time darkly mysterious."

"Immediately off to starboard a small and picturesque bay lay asleep. In the distance a headland was coming into view but I could tarry no longer to make observations. Collingwood was waiting." 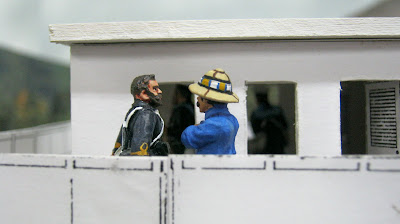 Collingwood: "Colonel. Good morning to you. Bad business yesterday with that infernal pair of Romanov gunboats lurking in these waters."

Collingwood: "I thought they might interrupt our voyage and dash out of some inlet at dawn but they capered off. Yes, Romanov, but how would you know?"

Lawford: "Indeed I know very little of the mission, our destination and...."

Collingwood: "I don't know much myself. All in good time Colonel no doubt. However, I am now authorized to shed a little light on the subject as we near our destination. Just round that headland you were observing forward is the Port of Dakla. We should raise the pilot boat before noon to take us in. Furthermore...."

Lawford: "As he spoke I could not help wonder if he was aware that my mission involved a Romanov party including Countess Alexandra. Drifting off I remembered her well-proportioned features accented by lovely red hair, her at times imperious nature and intoxicating style. I guessed the Captain knew nothing of her. Lest I drift farther away, I suspended these silent thoughts as Collingwood's continuing remarks returned to my full hearing."

Collingwood: "Lieutenant Beattie will give you a map of the region when we finish our chat. I know you are familiar with continental central regions where you were captured last year by the vile Tugs, but I daresay the southwest will be new to you. Between now and noon you may find it beneficial to study it. It's yours to keep. Later when you are taken ashore to report at Government House for orders, it might be of value." 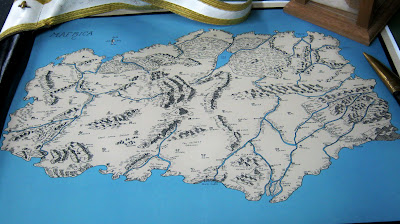 Lawford: "Back in my cabin I laid out the map recalling my first intriguing readings about Mafrica many years before. Naturally I read with great interest about fascinating early explorations, discoveries of strange new animal species, innumerable geologic wonders, the abominable slave trade that developed, Britannia's subsequent efforts to squelch it, the opening of the continent for benevolent trade and searching for mysterious ancient civilizations lost in time. The map produced by the eminent cartographer Mr. Jack Scruby Esq. a half century ago would be singularly helpful. Yet so much was still unknown." 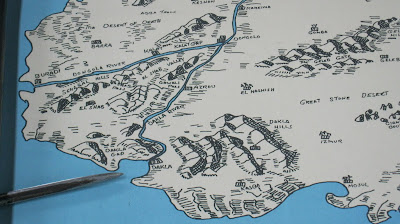 Lawford: "The southwestern corner of the map revealed the headland we were approaching from the southeast. The Port of Dakla lay just beyond within a prodigiously protected bay. Where would my orders take me? Deep into the interior I supposed."
"After several hours of study the sea became calmer and the ship slowed considerably. Out of curiosity I went to the bridge deck surprised to discover we...."
"Had already passed through The Bay of Dakla and commenced entering the channel of the great river by the same name."

"We passed a large near white Iberian-style official-looking building roofed with reddish clay tiles. I later learned it was Government House, to which I would immediately repair when taken ashore. One the balcony, two men observed Zanzibar navigate the narrow channel. In a few hours I learned their identities and the particular relationship they would have with my mission."


Mr. Albert Wyatt (left): "Zanzibar made good time."
Chargé d’affaires, Brigadier (ret.) Graham Day: "Yes and there is not a minute to lose."
--------------------
Closing Remarks
1. Mafrica Map is an improved and new version of Jack Scruby's original map. Pard and owner of Scruby Miniatures via Historifigs Mike Taber, gave me permission to use it here two years ago. See:  http://www.historifigs.com/
2. Zanzibar is a one-of-a-kind Houston gunboat. See The Virtual Armchair General for details.  http://www.thevirtualarmchairgeneral.com/500-houston.html
3. The river motorboat from tthe collection of Der Alte Fritz was built and painted by H.G. Walls, Herb Gundt. Der Alte also loaned his gunboat, the one nearest you in the photo showing two gunboats.
4. Government House is from Miniature Building Authority.
5. The two chaps on the balcony are from Pulp Figures: http://www.pulpfigures.com/main.php?custID=653051031305155441
PHP 14 and PHP18
6. Sailors are from Perry Miniatures Sudan Range painted by John Preece.
7. If you please, avail yourself and kindly post comments below.
--------------------
Posted by Gallia at 9:59 PM

Excellent work! These just get better and better!

Very mysterious. A great read. I really like where this is going.

I like the way this is developing, and I'm looking forward to more.

I don't think we have see the last of those Romanov gunboats..

Bill - just got back from holiday, and fired-up my steam-powered PC to find the continuing adventures of Col. Lawford & Nazim! More mysterious than an Agatha Chritie, and more suspenceful, I love your picture-stories!
Squibzy

Great stuff keep it up!