Chapter 53: 2nd Battle Of The Amla

FOREWARD
From 28-29 June 1900 General Pettygree's Main Body of The Surajistan Field Force reinforced Captain Bartlett's Advance Guard at The Amla River. On the 30th. Thugees doubling the size of Pettygree's force hurled themselves against the Imperials.

FAR LEFT FLANK
Action commenced immediately on the western flank where a host of Thugees {Der Alte Fritz Jim P. and Derrick N.} broke cover and splashed across The Amla. 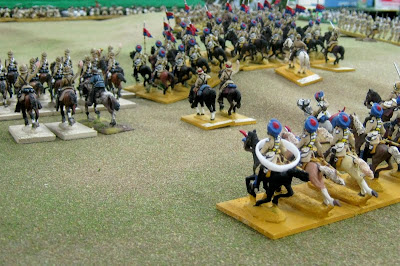 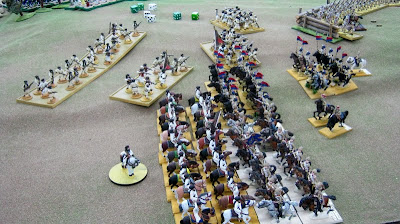 Horsemen of both sides collided in the first mêlée of the day. Left-most Berkshire companies took cover behind breastworks as enemy footmen moving rapidly forward skirmished with them. 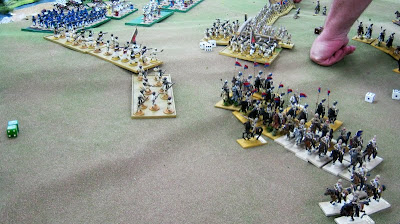 Enemy infantry crashed into the breastworks as more arrive not knowing their horsemen had been bested in the cavalry fight. 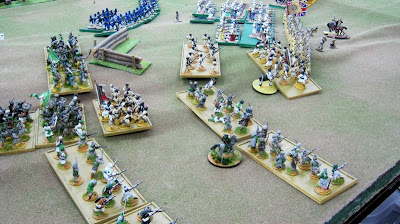 The Berkshires fell back under intense pressure. The Imperial Cavalry Brigade {not shown} rallied back at the gallop to reform behind them. The foe continued to surge forward, unstoppable with overwhelming numbers and zeal. 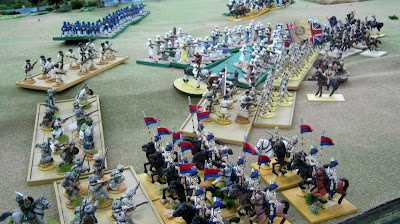 Again the cavalry came forward to the charge on both flanks of the Berkshires whilst the infantrymen met the foe with the bayonet. 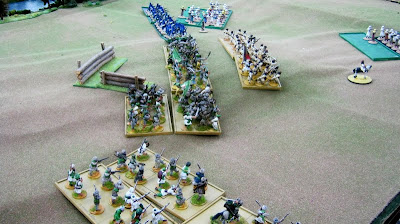 The Berkshires reduced to company strength finally routed to an Imperial square on the back table. Imperial horsemen {not shown} though victorious in three mêlées were ordered to break off and rally back again. The original Imperial left flank was destroyed.


BEHIND THE IMPERIAL CENTER: ON BACK TABLE 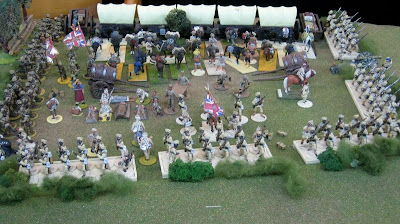 A brigade square meant to be unengaged unless attacked. Mission: Protect supplies, etc. and act as a final rallying point in case of disaster on the main table. It was not allowed to advance onto the main table but could fire onto it using the most negative range modifier. The remnant of the Berkshires {not shown} rallied here as did some of the 9th Bengal Lancers {not shown} near the end of the game. 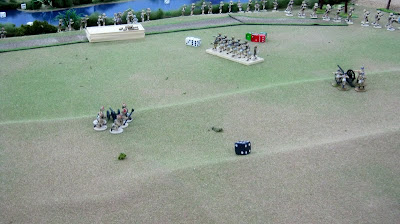 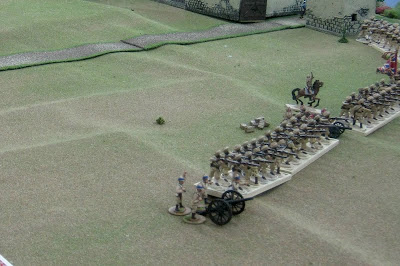 Later in response to a large Thugee surge {Earl K.} across the eastern Amla, Savory reformed facing east to.... 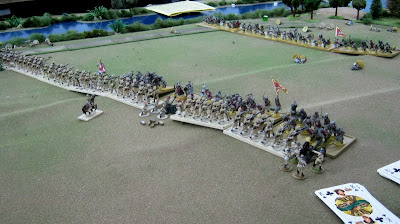 Receive a charge across open ground. 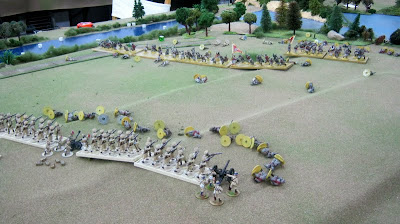 The right flank held and the enemy retreated back across The Amla.
THE CENTER
Colonel Sinclair's command {Keith L. and acting CinC} faced north on the the south bank of The Amla. At his disposal were the 72nd Seaforth Highlanders {68}, 1x 15 Pdr. + 1x 2.5" Screw Gun {8 crew} and a Naval Gatling Gun {8 crew}. These silenced enemy artillery and riflemen across the river but later .... 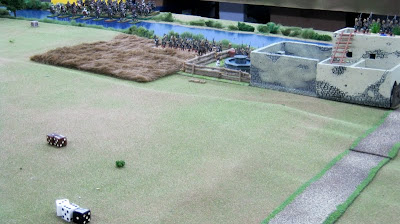 As worsening conditions on the left flank became apparent, Sinclair retired from the river to face threats from the west. 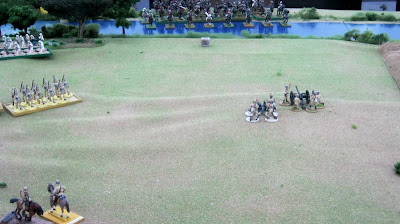 An immense body of enemy horsemen heading for a large Imperial gap was one of them! 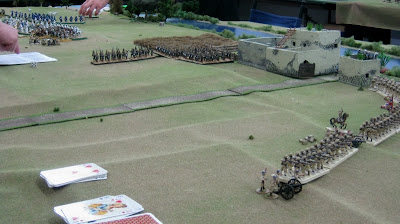 Most of the enemy horsemen were knocked out and routed by clever combined arms fire from Imperial rifles and artillery after crossing the river {not shown}. 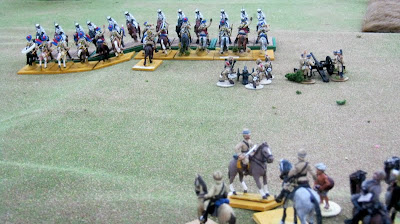 Some got through but were checked by the 9th Bengal Lancers. 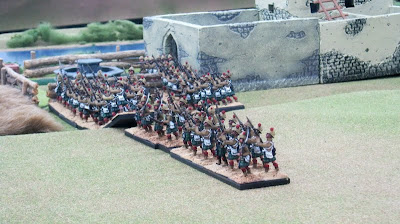 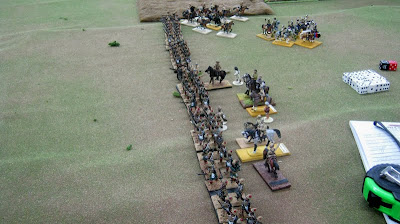 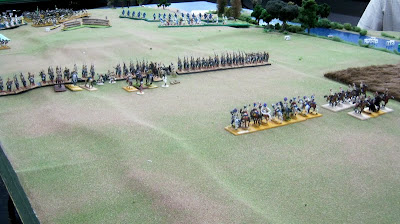 The Seaforths facing west were not tested. The foe elected to withdraw. The remnant of Blackiston's Cavalry Brigade can be seen. Off image to the right are Colonel Savory's 2nd. Sikhs similarly watching the foe retire. 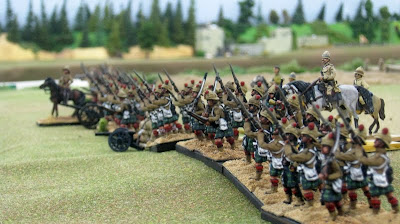 Thugees:
79 KIA, 161 wounded carried away for help and 67 lightly wounded returned to duty.

Imperials:
13 KIA, 90 in hospital and 17 lightly wounded returned to duty.

10th Hussars {20 at start}
-2 KIA, -12 wounded +1 Back To Duty = 14 in hospital
Supernumerary Capt. Verbeek in hospital
Trooper Ham in hospital for those interested in him
Effectives At Evening Parade = 7.

------------------
CLOSING REMARKS
1. Colonial tabletop gaming presents players with a unique form of tension not present in horse and musket games. Both sides worry about the other in terms of numerics and firepower. In addition more than a few Imperial missteps can lead to disaster; especially if natives have long movement rates. Players on both sides often think they have insufficient numbers of miniatures which is part of the genre. A good thing.
2. This was The Second Battle Of The Amla. Interestingly, Chuck L. and Todd B., in the smaller battle on the 24th of June 1900, attacked Captain Bartlett's Advance Guard from the west too.
3. From 1:30 to 2:00 pm we adjourned upstairs for "Low Tea" in the Living/Dining Room. Menu: Earl Grey tea with milk {plus sugar if desired}, varieties of scones, clotted cream, whipped cream cheese, Wilkin & Son, Ltd. orange tawny jam, Walker's shortbread, butter pickles, three kinds of cheese and small sandwiches featuring roast beef or turkey accentuated with mustard and Romaine lettuce. Light music played in the background as we companionably enjoyed polite conversation and each other's company.
4. Game start 11:00am. Game finish 3:30pm. Chit-chat till near 5:00pm.
5. Rules: Batailles de l'Ancien Régime {BAR} modified for 1880-1910 approx.
6. We sure had fun!
7. Singular comments are welcome, if you please, just below. Comments from participants are welcome too.
--------------------
Posted by Gallia at 11:27 PM

What gallant fellows! The menu sounds splendid as well.

Stirring Battle report chaps. Looks like the Berkshires took a fair sort of battering...stout work by the Sikhs eh.
No doubt those pesky tribemen will be nipping at your heels once they've licked their wounds...long may the adventure continue, Hurrah.

Great report! low tea sounds like just the job after a hard day on campaign.

I fear the Berkshires were ever an unlucky regt.

The low tea does sound like the high point of the day!

The action on the left did look fast and furious.

I fear I may have missed something - how/when did the Army arrive? Part 52 ended with the Seaforths on a daring night march . . .

The Berkshires took a fair old hammering, but gave as good as they got for as long as they could, all in keeping with such a fine old County regiment. Stout work all round. Looking forward to more!

I'm very glad you all found this chapter interesting, etc.
---
Conrad, Willie and Rob: {Low Tea} Advice was kindly given to me by some friends in Britain and elsewhere plus Mr. Internet.
---
Ogilvie, John and AJ: Yes the Berkshires have had a tough time within the blog stories; the 2nd. Battle of the Amla being the toughest. Stout, battered and torn but still standing in the arena.
---
Rob: There was too little time time to work up a story for the Seaforth night march and Army arrival at the Amla with the big game pending on the 27th instant. However, the next chapter may briefly mention the march and arrival as a flash back. That's the current plan anyway.
---
Thank you for commenting Sirs and thank you to those quietly looking in too.
---
Respectfully,
Bill

If I were not a few thousand kilometers from you, you certainly would not have had any leftover shortbread (yum!).

Reads like it was a very enjoyable afternoon game, sir. I wish that I were much closer . . . *sigh*