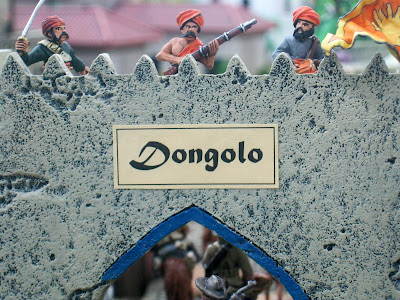 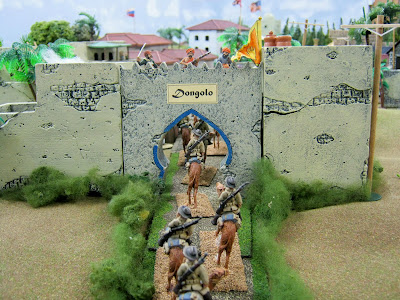 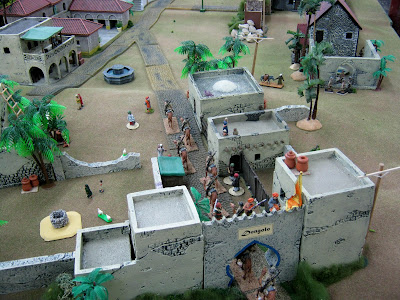 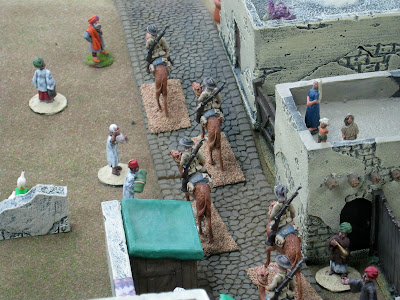 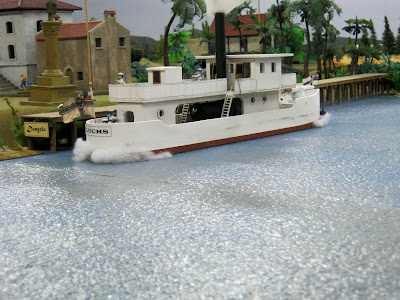 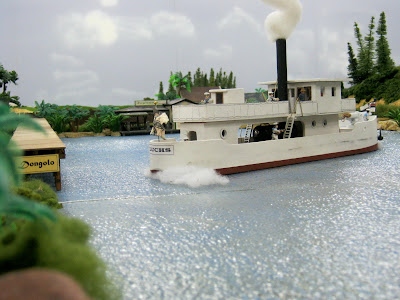 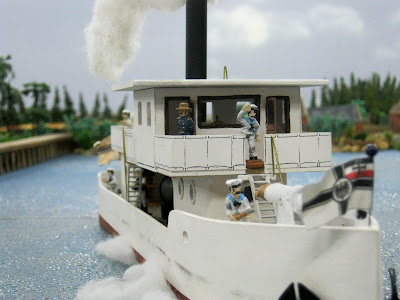 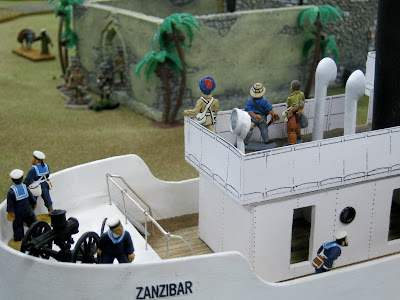 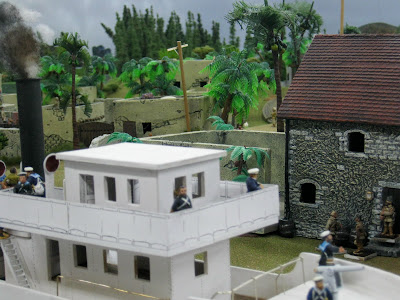 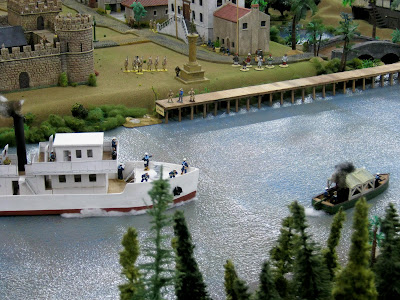 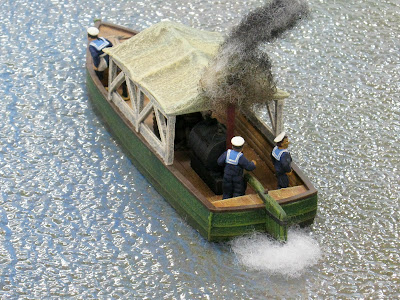 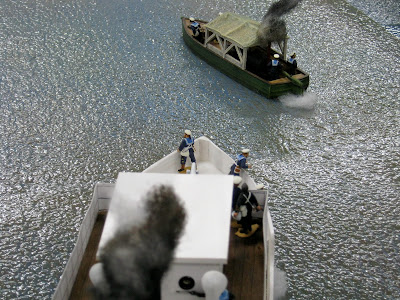 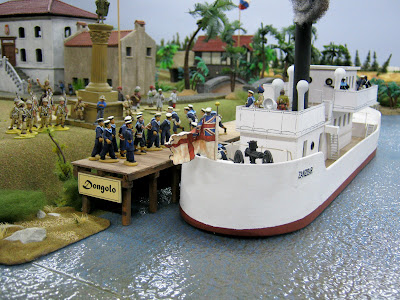 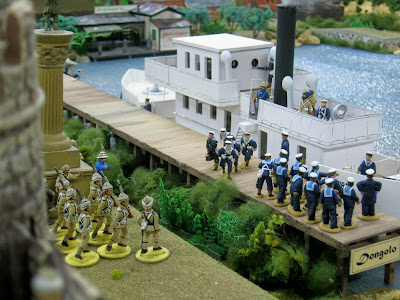 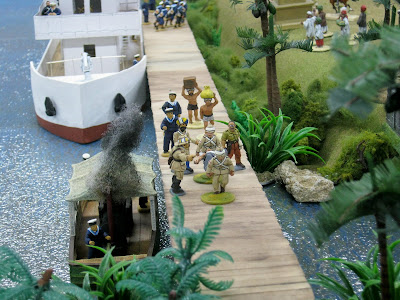 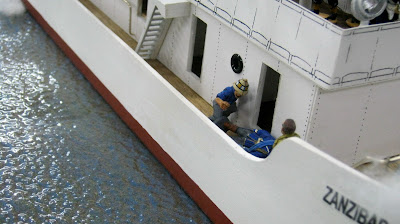 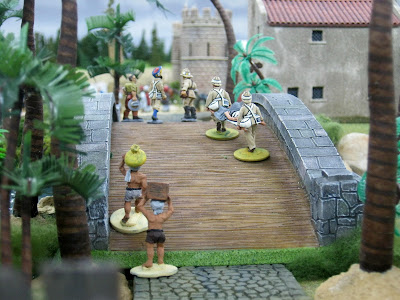 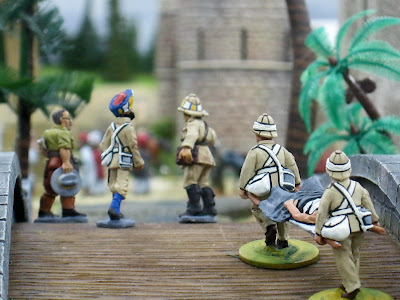 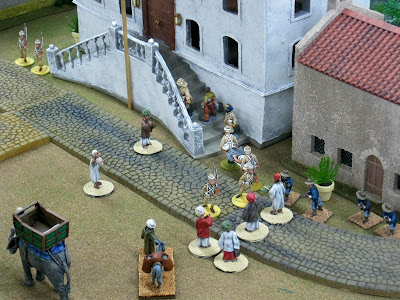 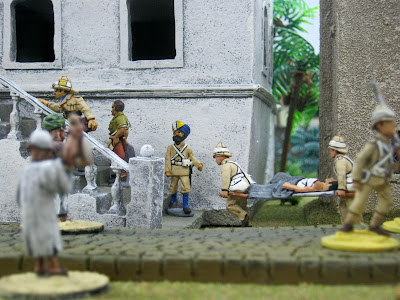 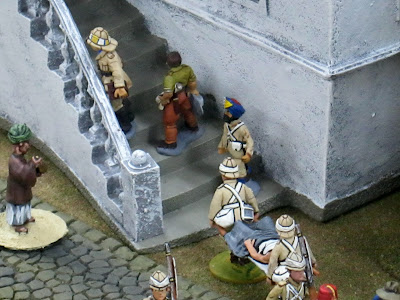 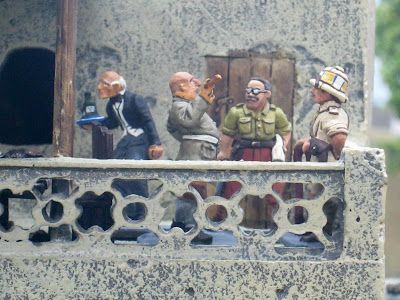 7. The dock was scratch-built for a model railroad layout.
8. The late Brigadier Peter Young gifted The Petrus Monument to me in 1985. It is near the dock. Thank you.
9. Chapter IX is already photographed. Action will heat up with the arrival of Countess Alexandra's expedition and Colonel Lawford's pursuit. Come back on the 5th proximo, if you please.
10. Thank you for your interest. Your remarks are very welcome below. Simply click on the word Comments.
----------------------------------------
Posted by Gallia at 12:05 AM

Your work is more interesting that most Hollywood blockbusters !. Love the gunships and the Embassy staff in the last pic.

A visual and story-telling treat as always. Awaiting the next installment.

What I value so much in your blog posts, are the "little things" that are everywhere - the traffic passing down the street (elephant with empty howdah), the civilains so carefully positioned like a diorama, and then there's the photography... My dear old Gran. used to go to the "magic lantern shows" as a child in the 1890s, and be transported to other lands by the slides... And now you are doing the same for me! Excellent! says Squibzy!!

Admirable work, sir! Every photo is loaded with atmosphere. Every new report is a delight.

I agree with Jacko! You could make a great movie about your blog!

You chaps,
always make great comments which I appreciate a lot. Thank you very much.
---
Next chapter IX is done and is only waiting for 5 Febraury to be posted. You will see the Romanovs arrive and depart Dongolo. It will be heavily personality driven.
---
Recently I made a decision to have Expedition to Alexandrapour end with Chapter XX tentatively before 2013.
---
See you soon as the temperature steadily heats up on the savanna and jungles of Mafrica.
---
Respectfully,
Bill