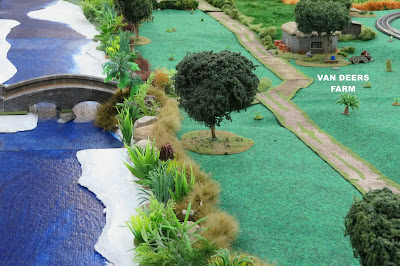 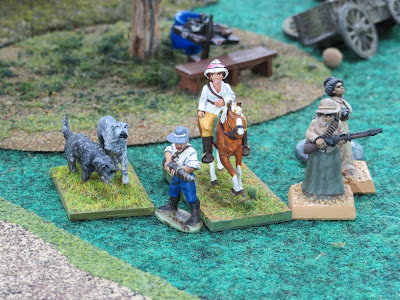 "Vader, the English are coming this way again."
"Ja. I see them now Margaretha." We must be pleasant to them." 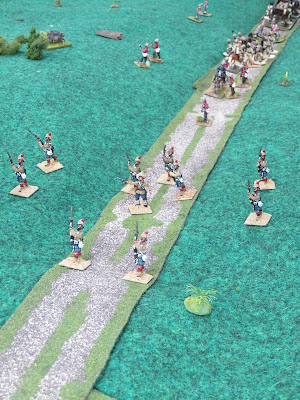 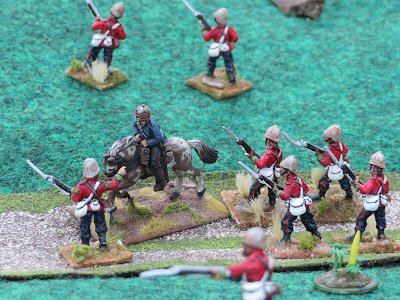 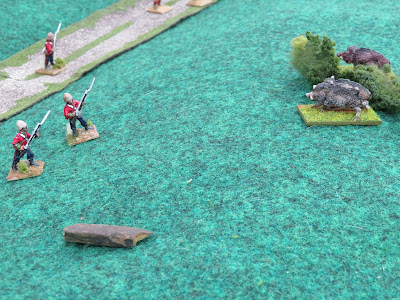 "I do my blind friend. Dinner an' make no mistake.
Our cooking pots will be full tonight Charlie." 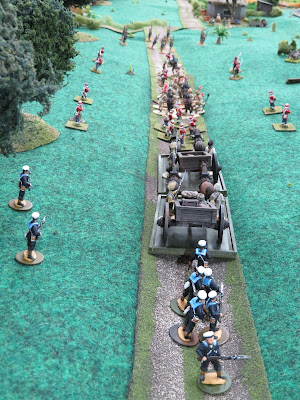 All was quiet at the rear of the supply column.
Flankers reported nothing amiss but....
Just as Nigel and Charlie were about to pot a few boars for dinner.... 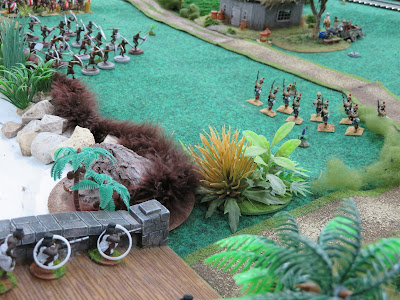 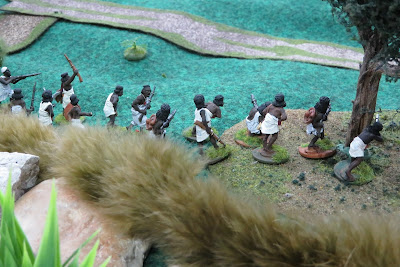 Then they crossed and headed right to harass the Scotsmen and to support native spear and sword armed friends. 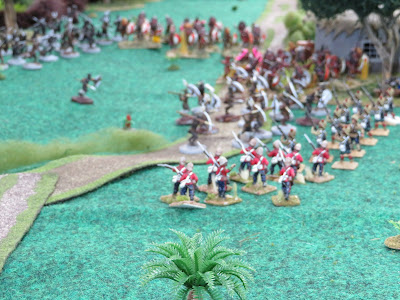 Who suddenly appeared in front of the Imperial van. Their shocking appearance and resolute advance found the Imperials just able to form a firing line to oppose them. It was a close run thing. 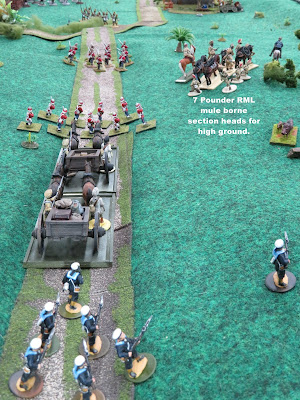 As these developments occurred, Lt. Hawkings ordered the 24th Foot detachment forward at the double to support the Scots and the 7 Pounder RML cannon to crown the high ground to the upper right. The buffs formed a firing line ahead of the supply wagons. 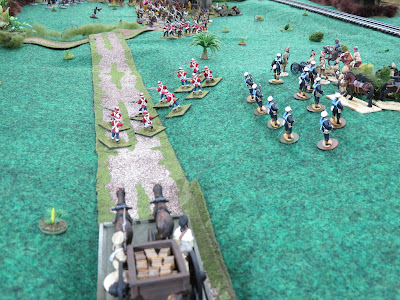 Next the buffs moved forward whilst the naval detachment double quicked to the hill. 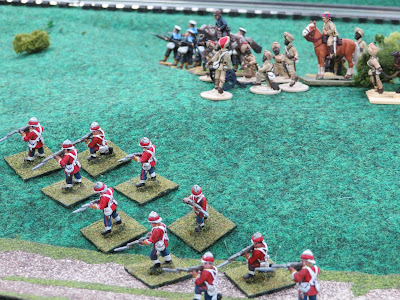 All formed a respectable firing line. 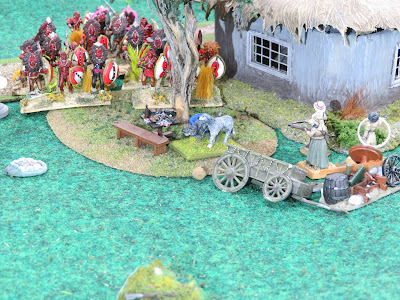 But there was no time for congratulations. Events moved rapidly. The Van Deers Family already cruelly in the path of the foe lost Vader Van Deers and mother suffered a wound. The daughters stoutly stood their ground firing away as the enemy came on. 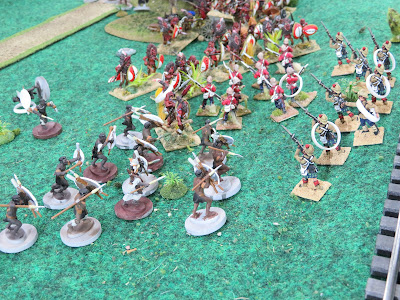 On they came, foes with throwing and stabbing spears. The two Imperial companies bravely fired, carried wounded to the rear and fought in hand-to-hand combat. 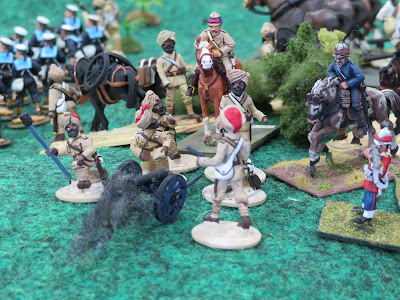 Back on the hill, Lt. Hawkings barked, "Give those poor devils some support! 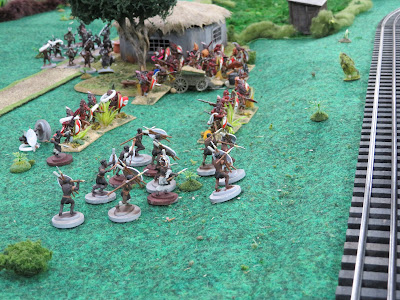 But, the end came too soon. There was no time to do more than watch the few minutes in which the gallant defence of the farm ended in favor of the Zulus. 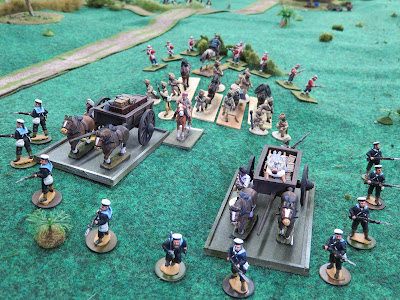 The Rear Guard reformed an all-round defence. They waited for the inevitable turning of the Impi's chest directly toward them and the appearance of the horns encircling them. But this did not happen. The foe was spent. 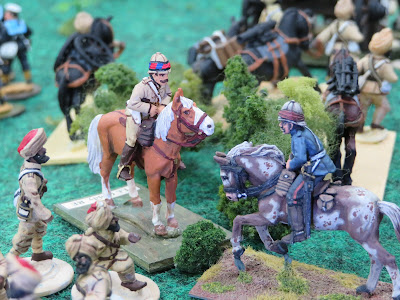 Hawkings: "Lt. Wright, we'd better get out of here while we can." 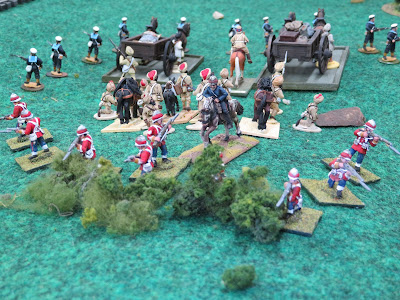 Wright led the decimated command back to the north as Hawkings and the Buffs protected the rear. Some survivors from the farm fight eventually joined the column.

The Zulus did not pursue. Perhaps they were stunned by losses. We do not know. They were apparently content to have stopped supplies reaching an Imperial garrison to the south.

1. Histori-Figs owner Mike Taber granted us the opportunity to show and use Jack Scruby's Mafrica Map. We show a portion below. The Van Deers Farm action took place on the Souk River just barely north of the lake of the same name in the upper center of the map. 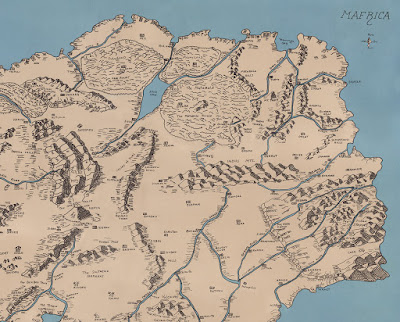 Jack Scruby's concept adapted the Second Period of Colonization on one imagineered continent featuring shifting alliances of native and Imperial powers. Hence in our first game we have Zulus allied with Masai though historically the two were separated by more than 2,500 miles. In Mafrica this does not matter. Plus we adopted the "Old School" principle of use miniatures we have ready.

(7) Rules: The Sword and The Flame 20th edition with aspects of The Africa variant.

(8) Played on a Wednesday evening in 2.5 hours. There may have been tenish turns and we certainly had a ton of fun.

(9) What's next? Mafrica #2 The Imperial Counter-Attack.

Ahhhhhh. . . This does the toy soldierly soul good on this very early Friday morning. Thank you.

Ahhhhh finally *sighs in contentment* we move on to Mafrica and imagination Zululand.... been following and waiting a long time to see this (years hehe).

A gallant defense and lucky escape for some. Always fun to see the colonials in action. And curiously as I type this "The Man Who Would be King" is on the tellie. Carry on Peachy!