Dervish Swarm and The Dispatch Rider


He Must Get Through 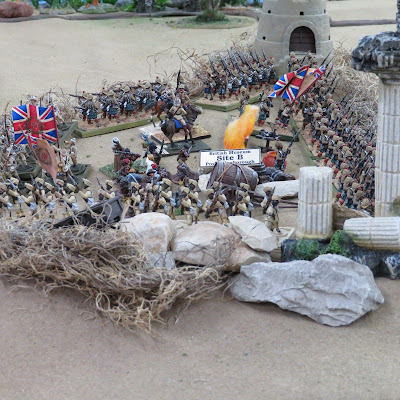 Late on 14 September 1929
After being defeated by the Dervish Swarm, the Imperials retreated to excavations at The British Museum's Site B. The ranking officer, Colonel Sinclair of the Seaforth Highlanders, ordered formation of a fortified irregular square on the mound there within fallen ancient stonework. The men further strengthened it by placing thorny vegetation around the perimeter making a zareba. 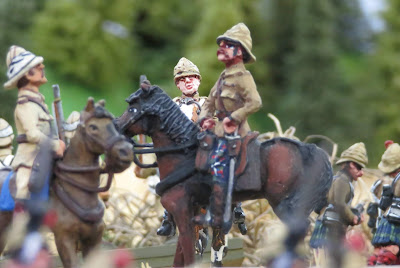 "Fortunately the foe has not pursued us but there is no guarantee they will not come during the night nor out of the rising sun in the morning. Best to stay in this strong defensive position rather than retreat up the Dongolo River and get caught in the open. But we need a volunteer dispatch rider to gallop for a relief column for our long term survival. Go find one." 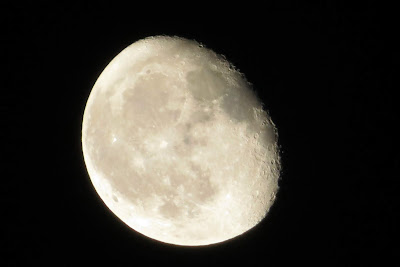 "He will depart tonight under the light of a waning gibbous moon." 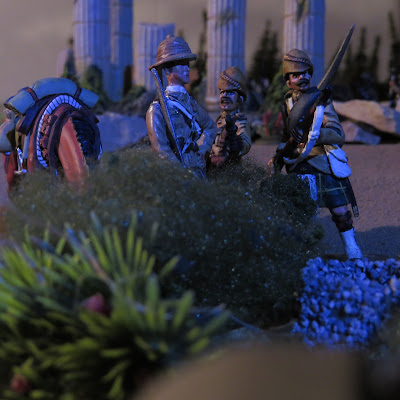 "Aye and maybe the Dervish will solidly bed down for the night to recover.
They took grievous punishments earlier today."

"We'll wait a bit yet for more darkness
an' then give you a proper send off." 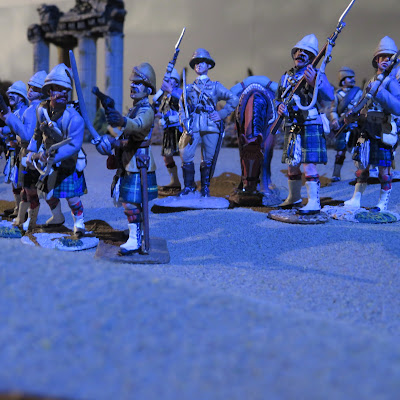 "Sir, we heard something out there in the dark." 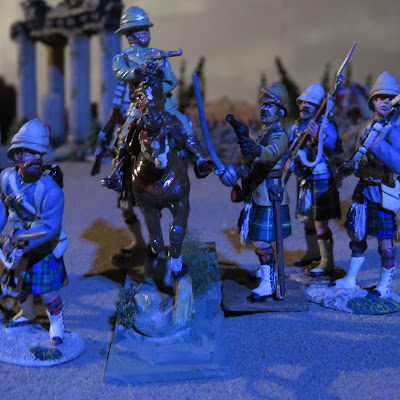 "Well Sir, best you ride lest the enemy has
prodigious time to report our presence out here."

"And react to my departure." 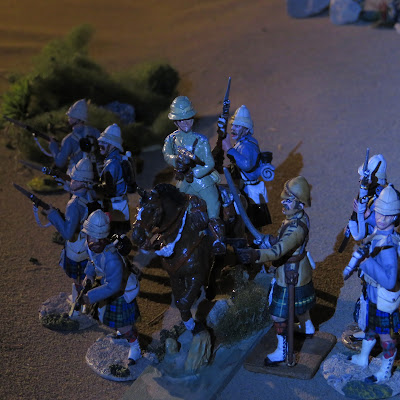 "Godspeed Captain. Off you go, Sir."

"Thank you Lieutenant Stewart and Scotsmen.
I'll be back, God willing, with relief."

"He must get through. Time's run'n out."

"Aye. Pray for that English officer." 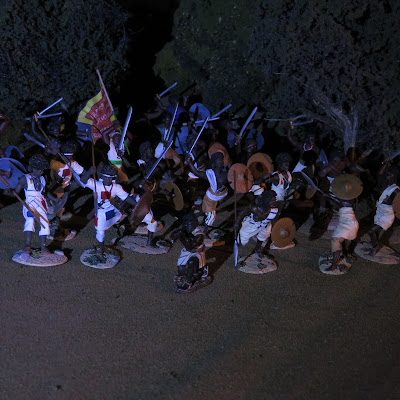 But out there in the growing darkness.... 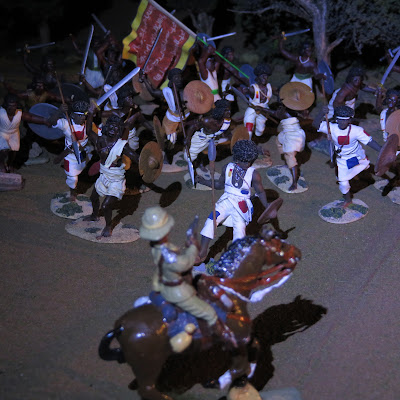 "Blast, you cunning rascals --- a snapshot for your insolence!
There, one down.
Now gallop like your life depends on it Dinah. Heyaaah!" 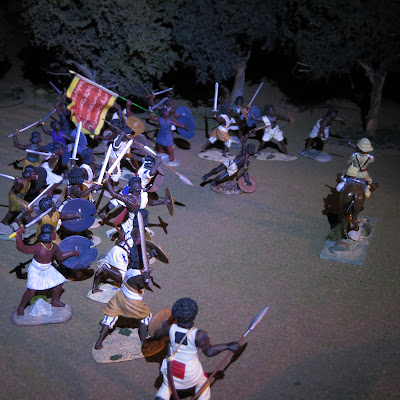 "Another one down.
The river is coming into view --- must get across fast." 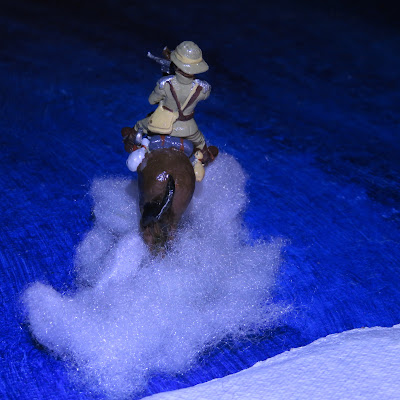 "That's it Dinah. Into the Dongolo." 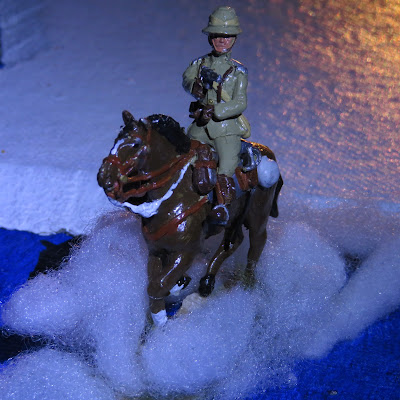 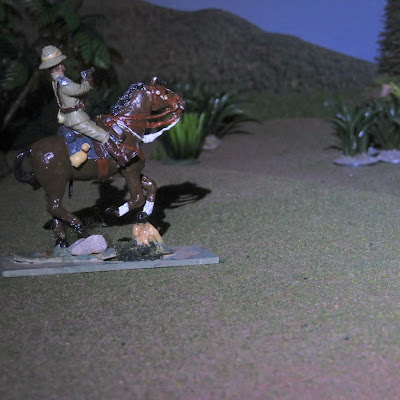 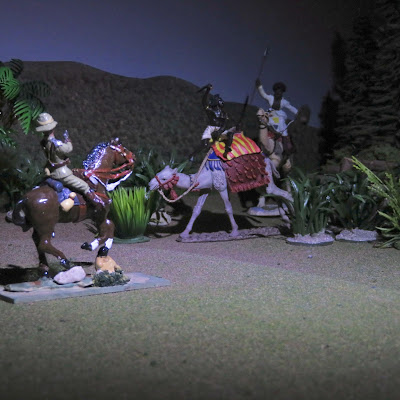 "Well you chaps are certainly out this morning." 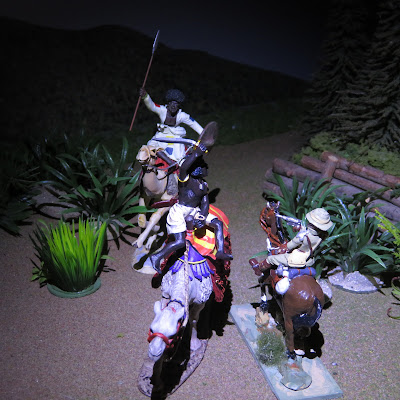 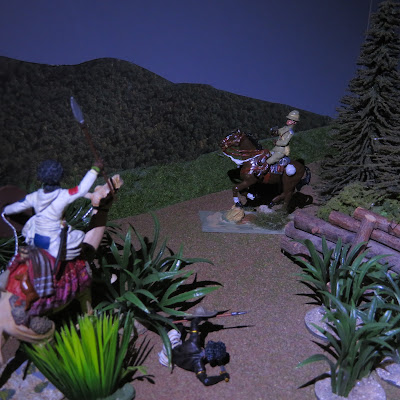 The leading warrior took a bullet and fell from his camel.
The other man turned to pursue but his spitter was no match for Dinah.

They passed through the rest of the semi-dark morning with relative ease.
As the sun, not yet up, began to dimly illuminate the Earth.... 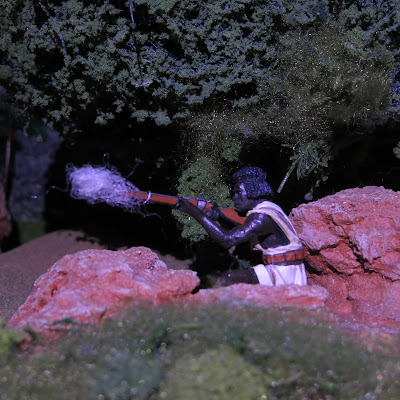 Will Cavanaugh and Dinah get through?

Very cleverly told and illustrated. I particularly liked the moonlight shots and the horse through water effects.

Colonel Sinclair should probably send out multiple riders to increase the odds that one of them gets through. I've been reading about Saratoga lately and this is what Burgoyne did when he sent messengers back to Montreal.

Marvellous, Bill, you have a real skill as a storyteller.

Thank you Nobby, Jim, Greg and Henry,
Your remarks are a tonic.
Gratefully appreciated,
Bill P.
Chronicler for The Adventures of General Pettygree

wonderful story... I always love to see your posts!