Credits
From the Scenario by Chuck The Lucky
Adaptation by General Pettygree Studios
Homage: Cecil B. DeMille "Light"

The greatest adventure story ever told about the Mafrican Continent 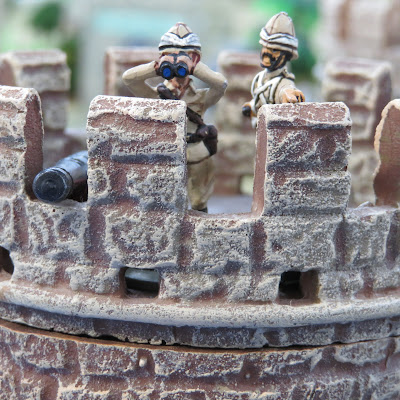 "Captain Nightingale Sir, The rain is drifting away and...." 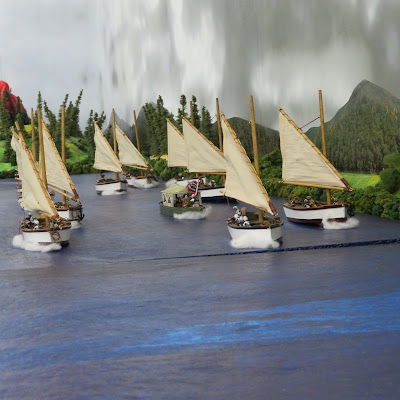 "I see 'em Sergeant and they are all coming at us!
Cut along to Colonel Beck to get the 1st Egyptians ready." 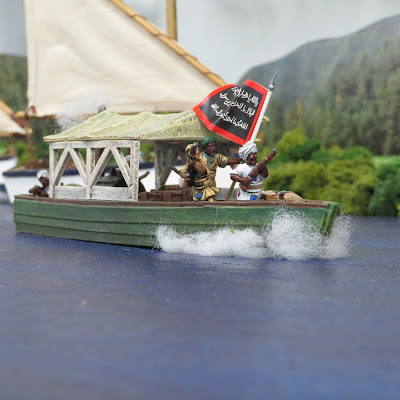 "That must be their abominable flagship; captured from us no doubt." 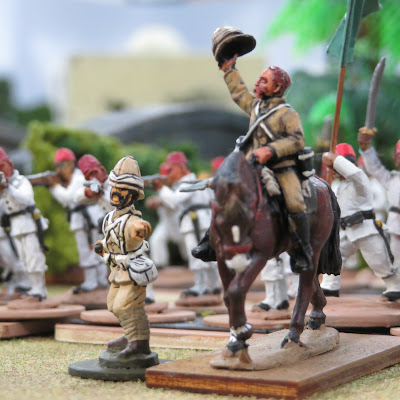 "Captain Nightingale's compliments, Sir and a
Dervish swarm of boats is sailing for the harbor.
And we saw the Guides hotly pursued by a horde of the enemy."

"How much time have we 'Sahgnt?"

"A quarter hour, Sir, maybe minutes more.
The flotilla has turned toward the docks as ye will see and
there are more dhows and even rowing galleys beyond our view." 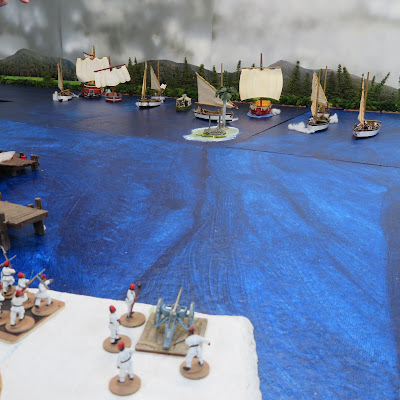 Colonel Beck deployed the battalion along the docks to give fire.... 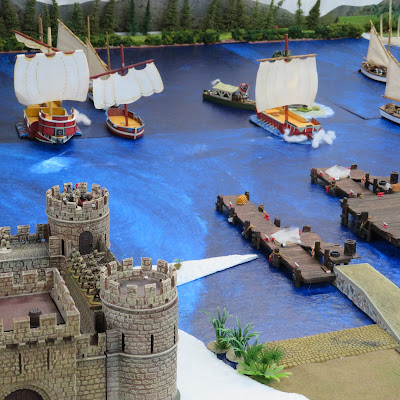 While the great guns of Fort Dongolo pummeled and sank ten boats.
Yet the remnant still rushed on.

The wind coming off their aft port quarter increased speed even more.
Faster and still faster they came using their best point of sail.

Was their intent to crash onto the shore in a one-way operation?
Would high water at this time of year enable their amphibious plan?

Yes and to rapidly disembark fierce warriors into a battle without retreat. 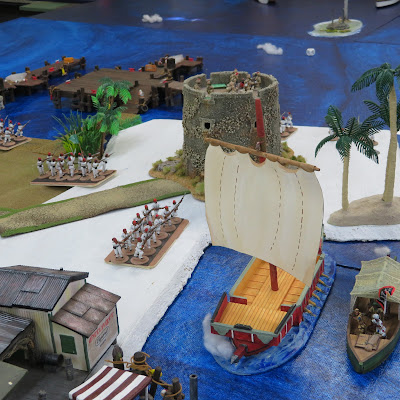 One galley and the flagship maneuvered around the point to.... 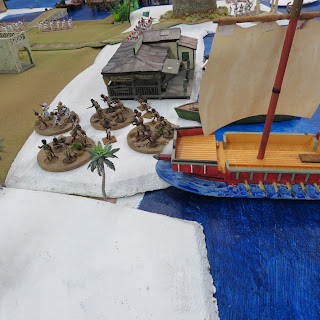 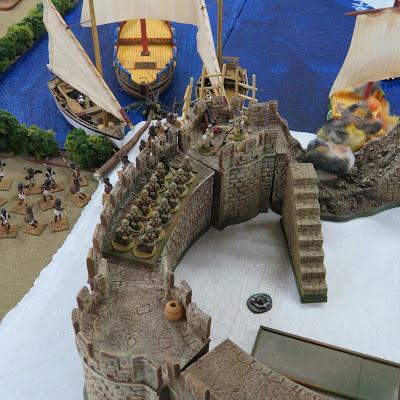 An explosion was heard far to the left. There one dhow never intending to reduce speed had enough momentum to actually slide up onto the beach crushing the bow against a lower wall of Fort Dongolo. The fanatical crew though thrown about by the collision then managed to ignite barrels of black powder. This suicide mission blew away a wall section shaking the rest of the old fort apart. 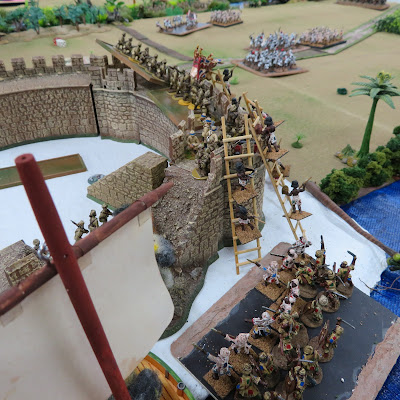 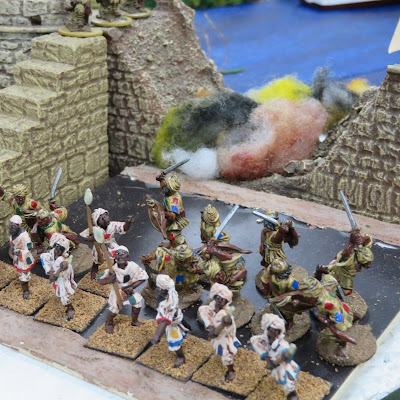 Other amphibians climbed over debris through smoke and fire into the fort. 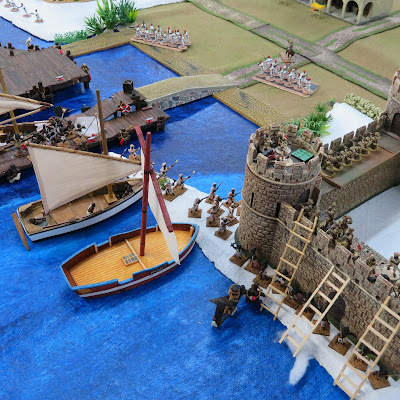 While ladders rose against another section of the fort. 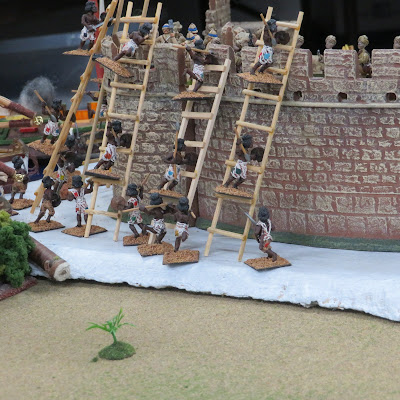 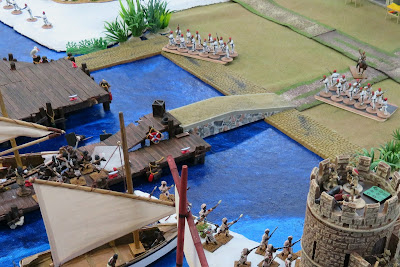 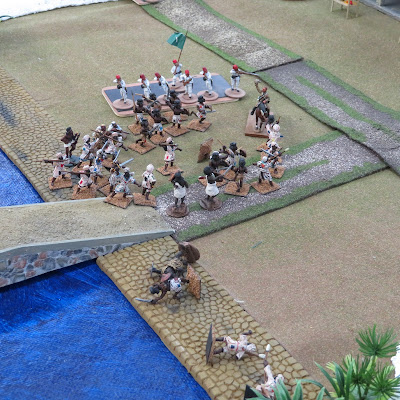 And for a time bravely stood their ground when the enemy came near.

But circumstances and numbers were on the side of the invasion force.
Everyone knew time was up for the Imperials in the harbor area. 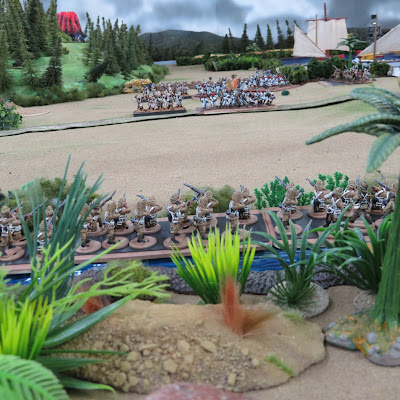 Especially when news somehow arrived from the far north flank where the Guides had been replaced in the battle line by the Royal Hamster Light Infantry seen in our previous serial story. 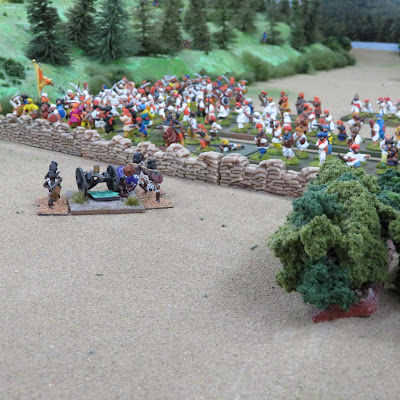 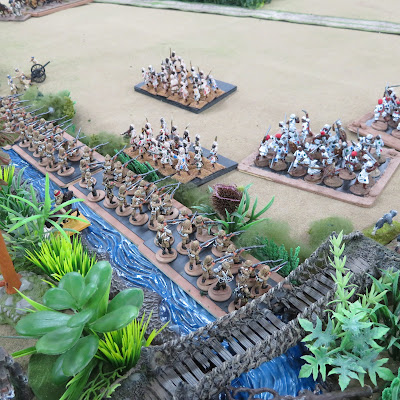 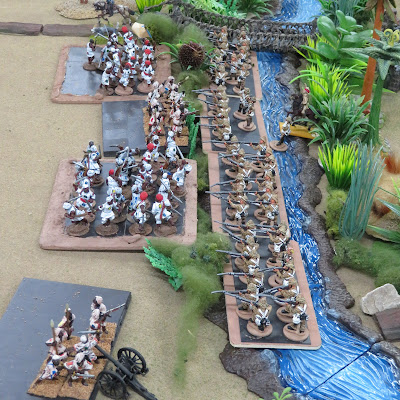 Engaging in fierce hand-to hand combat.
The Hamsters would eventually fall back.
The northern flank was gone to the native host. 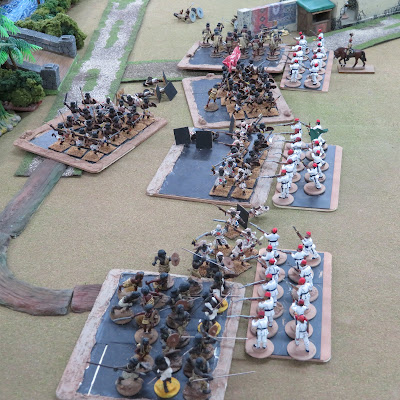 Back in the harbor the Egyptians relentlessly engaged fell back too.


What Is Next?
27th Bombay survivors are trapped within wrecked Fort Dongolo.
Lt. Colonel Coote's Guides Cavalry are a remnant skirmishing out of sight.
The 1st Egyptians sorely pressed are bravely falling back into the interior.
The Hamsters are retiring to The British Museum's Site B.
The harbor is lost.
The Dervish are victorious everywhere. 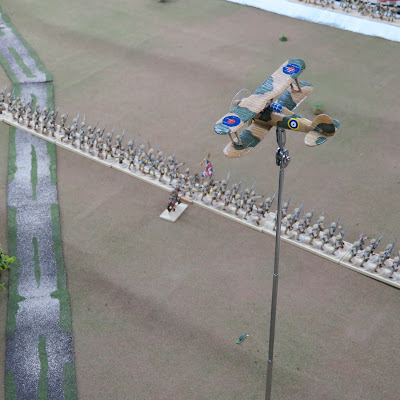 A bird's eye view of the wild and exciting conclusion of Dervish Swarm. 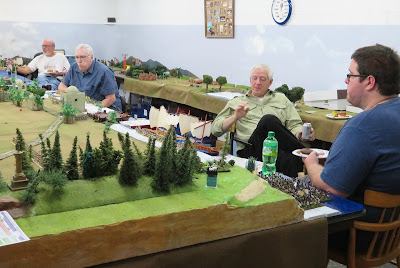 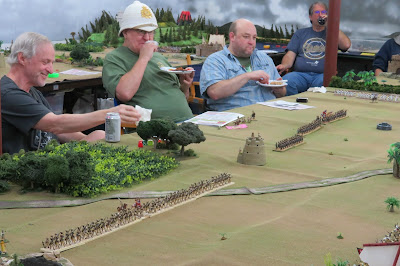 Near to far: Jim P., Greg B., John B. and Dan E.
The harbor is in the upper right and top center.


Next Things
Story resumption.
Your remarks placed below, if you please.

It looks like the forces of the Prophet are in the ascendancy. Numbers have a quality all of their own. This is the kind of stirring stuff glimpsed through some old plaque on a dusty parish church wall telling of some mother's son and his comrades who subscribed to the memorial. I look forward to the next chapter. Well done to all involved.
Stephen

Greg and Stephen!
Thank you for taking the time to write - always appreciated. This battle gave me a perfect reason to use ladders in the storming of Fort Dongolo. The last time the ladders were used prodigiously was for the what-if French storming the western wall of Quebec City in April 1760 after historically winning at Ste Foy. The ladders were made wide enough so bases could be inserted on the rungs. What fun that is.
Cheers,
Bill P.
Chronicler for The Adventures of General Pettygree