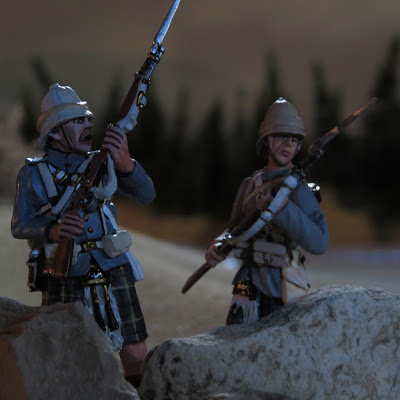 "D'yah here that rustling by the stream Duncan?"

" A malingerer you are. Wake up. I heard someth'n metallic too."

"All right then. Keep a sharp eye if you can, with the sun com'n up now." 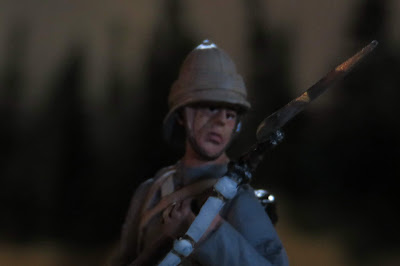 "I hope that dispatch rider the Colonel sent out brings a relief column." 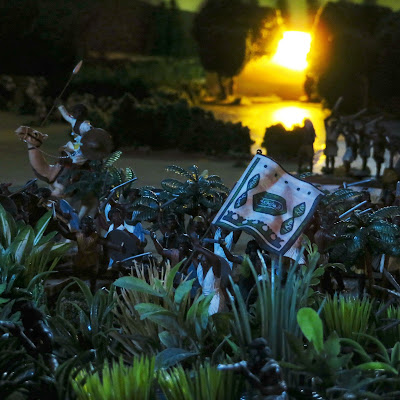 "Here come them Dervishes. --- We gotta warn the Colonel." 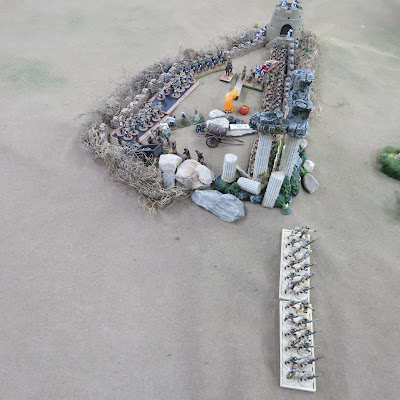 Colonel Sinclair's Square awaits the foe atop the mound at
The British Museum's Site B excavation. 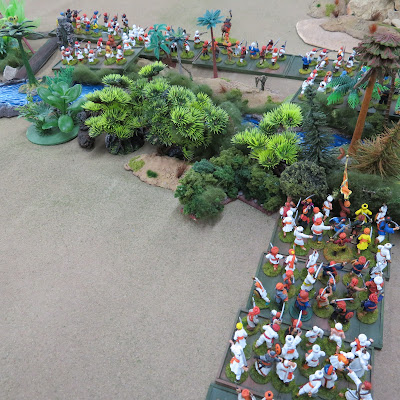 The right-most enemy body began crossing a shallow creek
disordering them a mite while.... 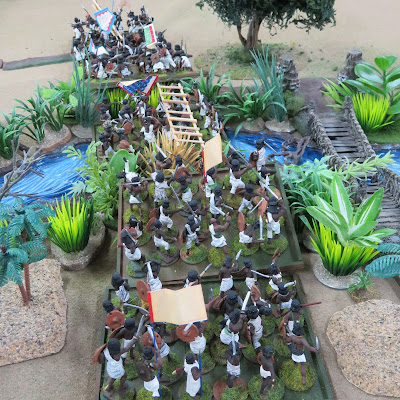 Another crossed the same creek just to the left. 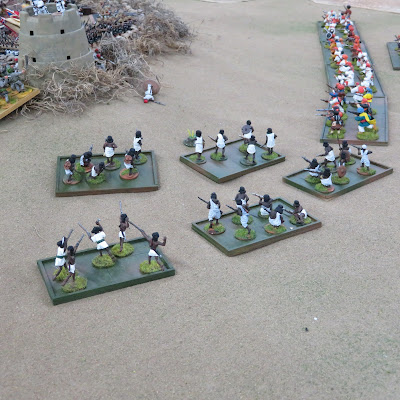 Both deployed skirmishers firing ineffectually into the square. 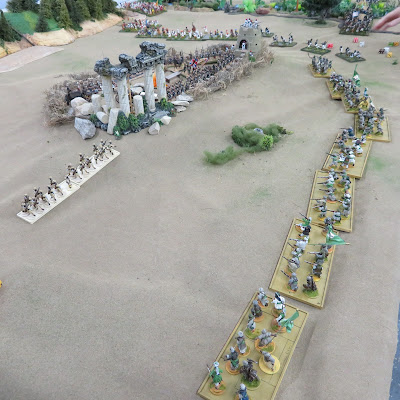 Another face of the square contended with a third skirmisher force. 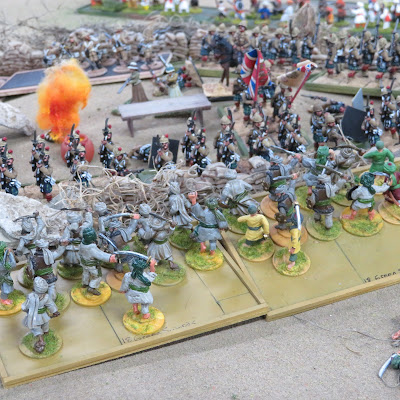 Covering massed swordsmen who eventually charged through to
the zareba protected by thorny bushes, sandbags and Seaforths. 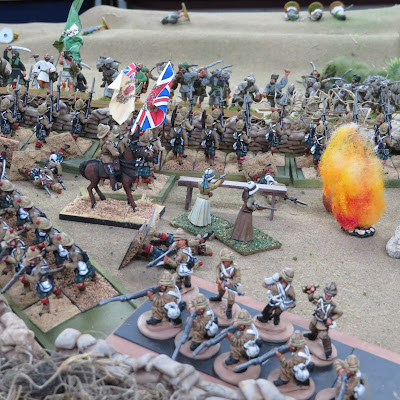 The Highlanders encouraged by Colonel Sinclair repulsed them. 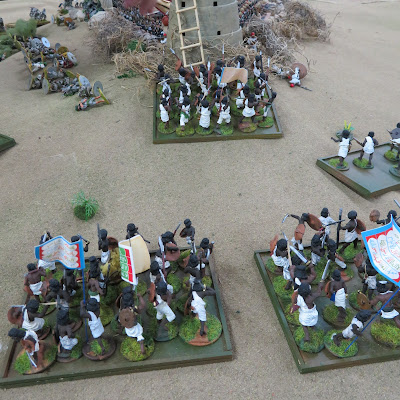 While to the right massed sword and spearmen
rushed forward intending to scale the corner tower. 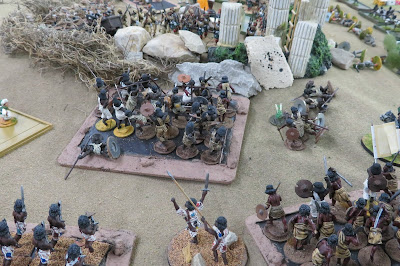 On the opposite corner, tribesmen
worked around a different zareba section. 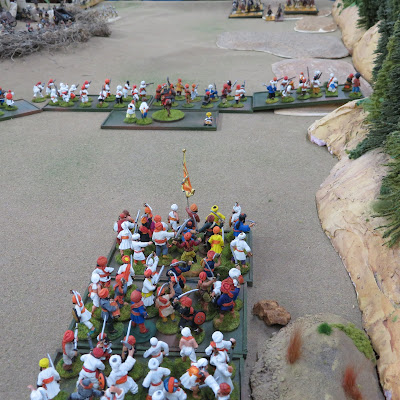 But back on the right flank, orange-sashed natives we first saw
suddenly shifted away from the square facing a new direction. Why? 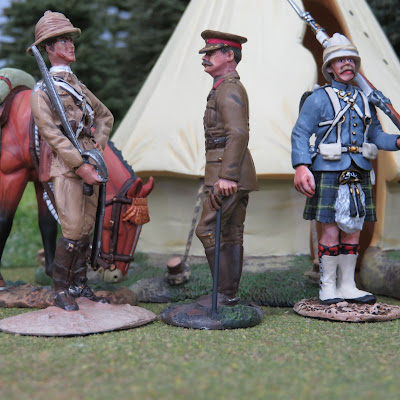 Because three days before, the dispatch rider though.... 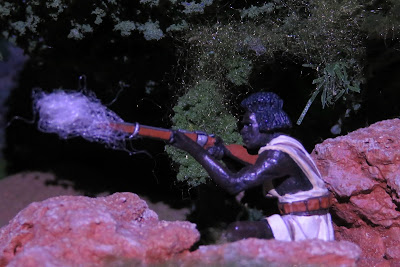 Almost downed by a Dervish piquet arrived
at General Pettygree's headquarters up the Dongolo. 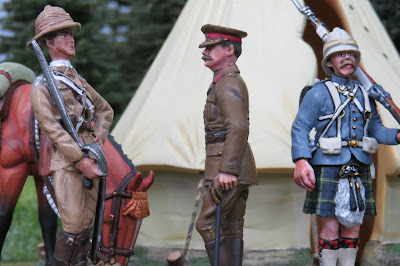 "Cavanaugh. Glad to see you. Not too grievously wounded I see.
What is your report?"


"Sir. Colonel Sinclair sends his compliments respectfully requesting that a relief column be dispatched to Site B. The Dervish, Sir, have us surrounded. He dared not risk a retreat overland given the odds and our many wounded."


"Well Sir, that's a fine situation. Get some food and sleep. And....
Are you well enough to lead the 9th back to Sinclair in three hours?"

"Very good. The rest of the Army will march at dawn." 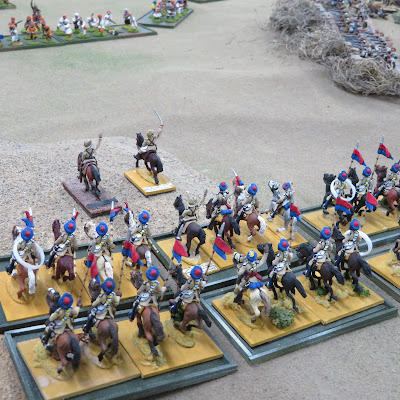 The 9th Bengal Lancers arrived in the nick of time
led by Captains Dyce-Powers and Cavanaugh. 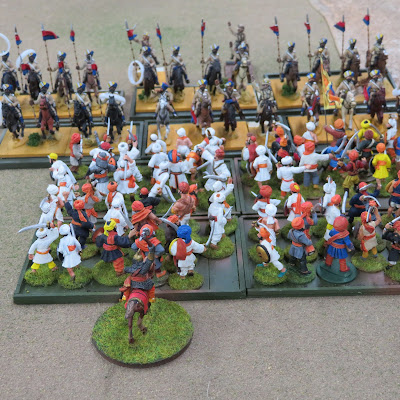 They immediately charged and routed the foe. 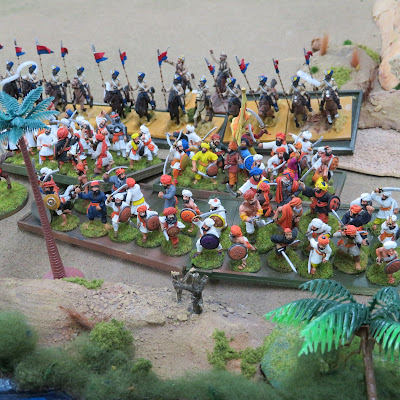 Which fled and was cut down in the pursuit. 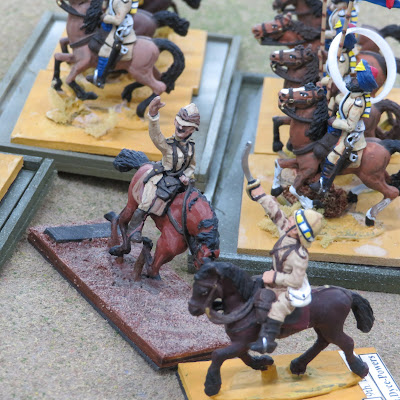 "Cavanaugh! That was the grandest charge since Waterloo!"

"Right you are Dyce."

After this the Dervish lost heart and abandoned the battlefield. General Pettygree arrived two days later and eventually withdrew the entire command up the Dongolo River relinquishing the region to the Dervish Empire.

These tabletop adventures remind me of old serials and Errol Flynn movies in the best possible way. Over the years, I have found myself eagerly awaiting the next installment depending on the various scenes you have set for us. Great stuff!

A nail-biter from start to finish. Well done, even if they have lost the territory for now.

Initially I thought that we were in for it as the Dervish appeared from every direction. However, I kept my feelings to myself so as not to upset the men. I felt much better after 3 controlled volleys sent the first lot, to our front, off to their Maker. The Beja and Hadendowa attempted to hit our right flank, but the two companies of Sikhs that I deployed outside of the zariba held the Beja at bay for quite awhile. The Sikhs were under orders to fire two volleys, so as to increase the number of rifles to our front, and then to retire back into the zariba. However, the noble Sikhs decided to stay outside the zariba and face down the Beja.

The Dervish made one more rush at our front, but they were easily repulsed by the Seaforth Highlanders. Then the Hadendowah attempted to attack the tower, our weak point, but our Egyptian soldiers successfully held the tower. The Hadendowah seemed to loose heart after this attack.

A final charge by the Beja on our right flank was once again repulsed by the Seaforths. The Dervish fell back out of sight after all of this.

The Harrington sisters, Alexandra and Minerva, send their best wishes to their uncle and their assurances that they are well. I dare say that Alexandra was particularly plucky with her Purdy Shotgun.

Looking forward to your arrival with the main column.

Tremendous fun. Thanks for sharing this.
Best wishes.

Great story, Bill. Thanks for sharing it with us.

Good fun as always. Wish I could have attended the last segment.

Stokes, Michael, Archie (Jim/Der Alte Fritz), Greg, Phil, Jim and Siegfried!,
We've reached the exciting conclusion together by your interest, support and by you taking time to write. Plus there were many who took the time to view the story. I appreciate this all very much. Thank you.
Respectfully,
Bill P.
Chronicler for The Adventures of General Pettygree

Hope to hear more from the the good General soon! Thanks for the great time! John