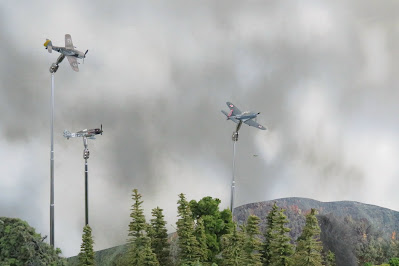 Drew opened up his two rear-facing 7.62mm Browning flexible-mounted machine guns just before the Focke-Wulf 190As lined up and fired. Each had four wing-mounted 20mm cannons and two 13mm #131 machine guns synchronized to fire safely through each plane's three propeller blades.
Russo could not get the dive bomber up to it's maximum 255 mph speed because he was coming out of a dive. Even if he could, the German fighters were 150 mph faster. The dogfight would be terribly uneven. But the Americans had one chance. 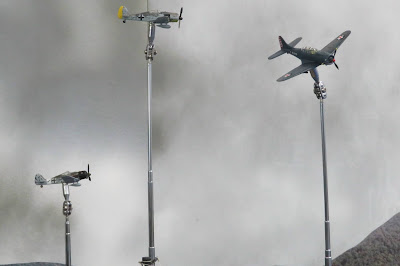 Russo steered right as hard as the Dauntless could turn as enemy fire closed in. It worked because the FW's high speed caused them to rocket past out of firing arc. 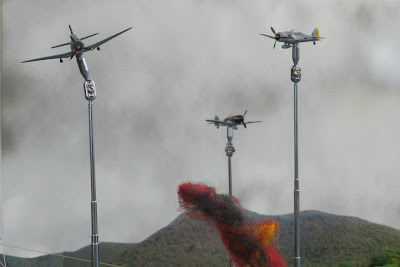 "Keep firing Drew! They're coming around. We're going to fly over the burning ship. The smoke might give us some cover." 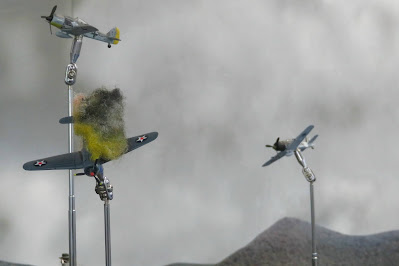 However, time ran out as more fire hit the Dauntless. The engine caught fire and the prop stopped rotating. She started falling, mortally wounded.
"Drew! Bail out. We're done."
Both men jumped and immediately pulled their chute rip cords. They wondered if they could survive such a low altitude jump over the village of Blastoffheim and adjacent pine woods. Even if they survived, the angry German garrison hiding from the bombardment probably would have no trouble finding and capturing them. How angry would they be?
THE OTHER TWO DAUNTLESSES 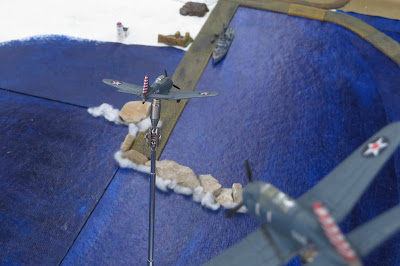 Utah's and Eddie's Dauntlesses had been ordered to await events high above Blastoffheim. When the Fw-190s arrived and easily shot down Russo, they prudently flew elsewhere. Their chances to knock down even one of the faster and more powerful new Luftwaffe fighters  were minimal. There was no point engaging in a near suicidal attack. At the moment they were not being pursued. 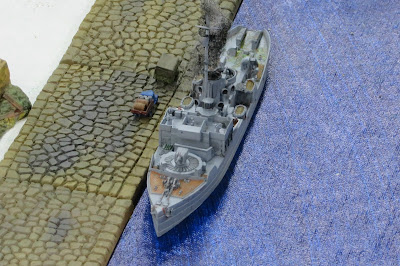 Luck arrived when a small Kriegsmarine destroyer docked in a tributary down the fjord was found. Both agreed to attack. It looked like another sitting duck. 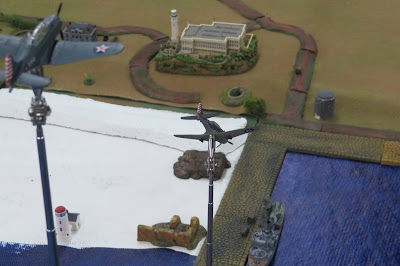 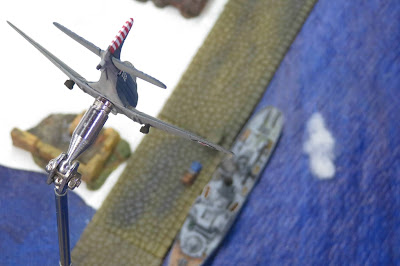 But Utah missed. So Eddie nosed his Dauntless into its own dive. 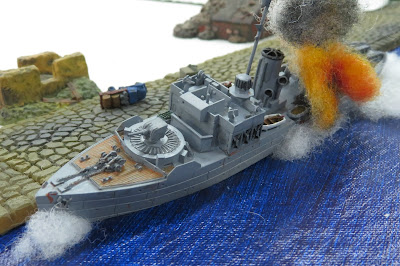 His 500 lb bomb struck the ship just aft of the single funnel. The bomb tore through the bottom of the ship mortally wounding her. The concussion knocked over two supply trucks. 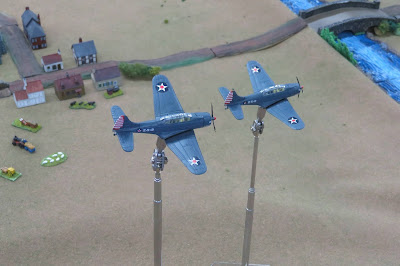 "Nice one Eddie. That was some explosion. She immediately heeled to port and looks like she is going to turn turtle."
"Thanks! Time to return to Ranger?"
"You betcha. --- Utah out."

----------          ----------          ----------
CLOSING REMARKS
(1) Our story is an adaptation of October 4, 1943's Operation Leader naval air attack on Bodø, Norway. USN Aircraft Carrier Ranger in cooperation with the British Home Fleet launched two groups of aircraft to disrupt German naval operations. Group 1 consisted of 20 Dauntless Dive Bombers escorted by 8 Wildcats. Group 2's composition was 10 Avenger Torpedo Bombers protected by 6 Wildcats.
(2) Miniatures on hand were deployed and numerically scaled back. Thus, Devastator Torpedo planes stood in for the Avengers and the date of our drama is on an unseasonably hot day in August 1943 solely because most of my Germans are dressed for warm weather.
(3) There is room to possibly include a surface naval battle with the Kriegsmarine. German Battleship Tirpitz was still operational until September 22, 1943. Add escorts and air cover for a what-if game and have them charge out of a fjord.
(4) There were three opportunities to play a solo game as the story evolved during production. Home Rules adapted from Bag The Hun, Check Your Six and Duel of Eagles were used.
(5) Act 1 --- Scene 2:
The Me-109s could not catch up to the Devastators before all four torpedoes were launched at the Wilhelmina. However, the fighters were coming on very fast and soon opened up.
Lt. Zeiss hit Devastator #4 (Buckley) knocking out his engine causing him to ditch. The Luftwaffe rookie wingman, Gunther, fired wildly using almost all of his ammunition. He missed the allied plane he was shooting at and was rewarded by jamming. He could not unjam and so flew off.
The Wilhelmina vainly tried to help with machine gun fire but continuously failed.
Zeiss became the target of three Devastator rear gunners forcing him veer away.
The Torpedo Attack: Torpedo 2 did not strike the freighter because the latter had been steering to port hoping to avoid some of the fish. It missed. Torpedoes 1 and 3 struck causing four points of damage. (2xD6s added together; 1+3=4) Eight was needed to sink the ship. #4 torpedo struck last the next turn but was a dud. Wilhelmina was 50% damaged and afire though. Litko makes the torpedoes.
Captain Chafee ordered the Devastators to turn hard to the right to retreat back to the sea and Ranger. Oddly Lt. Zeiss overestimated his opponents and was out of angle to fire for a time. But, he flipped around in the celebrated immelman maneuver and rocketed toward one Devastator. His fire did not down the allied plane but its speed was considerably reduced by damage. Zeiss then broke off due to low ammunition and because he did not want to tangle with pilot and rear gunner fire from the three remaining enemy planes.
Zeiss flew to Wilhelmina to look her over and then joined Gunther for a return to base. Wilhelmina suffered explosions, struck rocks and eventually sank. Most of the crew rowed ashore to safety.
The three remaining Devastators returned to Ranger. Buckley and Harrison swam the short distance to shore and were recovered by Norwegian resistance fighters. Months later they were taken off by a Royal Navy submarine and returned to Scapa Flow.
(6) Act 2 --- Scenes 3-4-5:
After the war it was determined that the Luftwaffe serendipitously perpetuated a clever ruse to draw off the Wildcat fighters escorting Bomber Squadron #3 with the two Me-109s seen earlier in the story. This allowed the Focke-Wulfs to easily engage St. Julian's Dauntlesses. The 109s were unable to fight because Gunther was still jammed and Zeiss was nearly out of ammunition. Thus, they acted as decoys. (This is called "movie logic" in the motion picture business.)
German Losses:
Freighter Argonaut and an unidentified small Destroyer sunk.
Argonaut seamen Tiny and Kurt did jump into the water to save themselves. Both enjoyed fishing until surrendering to the Norwegian resistance in April 1945.
Colonel von Schill's Operation Nordhimmel (an Alfred Hitchcock McGuffin) was cancelled. Records lost.
One Dauntless was shot down. Pilot Russo and Airgunner Drew survived their low altitude jump becoming POWs returning to the USA after the war.
(7) The story was adapted from an actual historical event, 1943's Operation Leader. Hopefully you enjoyed the eye candy, dialogue, photographic techniques, (forced perspective was one), style and unique circumstances. The production crew (me) listened to the soundtrack from the 2019 movie Midway a lot. It was stimulating, entertaining and enhanced creativity. 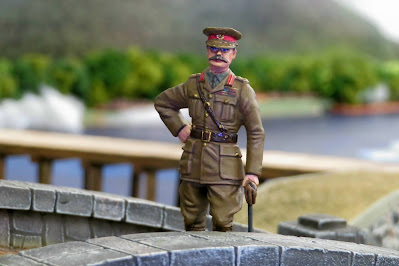 Very enjoyable. Thanks for posting this.

This is an action very different to my wargame experience as WWII, Americans, planes and ships are not a feature. I enjoyed the change. The photos of the aircraft were very convincing

Super, very enjoyable, thanks for posting

Bill, this is pretty cool. An enjoyable story!
Don

Thanks Bill, That was a fun read over morning coffee. Your pictures just get better and better.
Graham

Quite a show!
Amost needed some popocorn.
Partricularly like that Adler Scout Car.
Bill K.

You’ve got an amazing collection of minis Bill, the ship’s crew and all.
Are these based on a wargame you played, or do you create the story from scratch and then position the models appropriately on the table? Just curious.

Answer: In this case the story evolved and two brief air games were inserted along the way. Aircraft were positioned per the story.
Usually there is a game and the story develops from same.

I read your piece on the adventure in Norway this morning. Very imaginative.
Good photography, really helps with the drama. Rob

Your remarks and sentiments are gratefully appreciated!
Respectfully,
Bill P.
Chronicler for The Adventures of General Pettygree

An excellent series of posts very entertaining! I had no idea that US Navy aircraft were engaged in the fighting in Norway so educational too.