The conclusion of the surprise Battle of Kotar. Thank you for returning. When last you were here, the foe had surprised an important column of reinforcements marching through Kotar, adjacent to Fort Grant deep inside Imperial-controlled territory. We return now to the enemy rush and the Imperial reaction. Who will prevail? Larger images may be obtained by clicking on them. 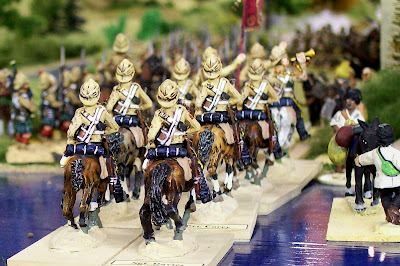 An escort of 10th. Hussars struggle to follow Genearl Pettygree across the Kotar River and through panicking civilians and supply animals toward the sound and smoke of gunfire. 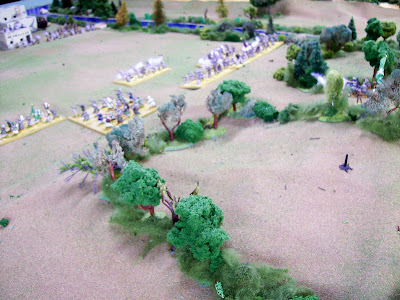 No time for error for either side! The inscrutable foe rushes in and at very close quarters. Rearmost soldiers of The Column fire first shots to stop them. Will they? 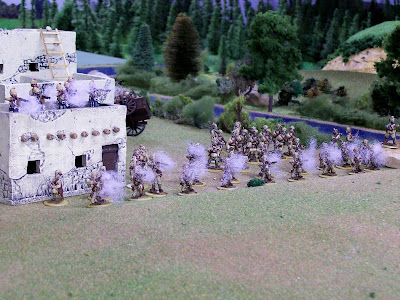 Left to Right: A company of Seaforths fire from the top of a building while the Bombay Miners and Sappers in extended order also give fire. 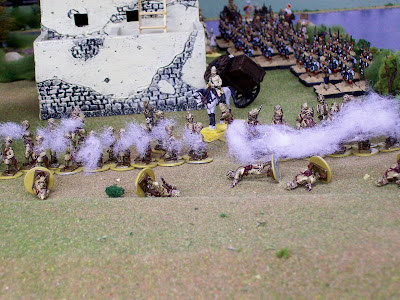 General Pettygree arrives on the scene without his escort. The latter are still making their way though the panic. The Seaforths however, calm and steady throughout, have about turned and are on their way to help. Hurry laddies! 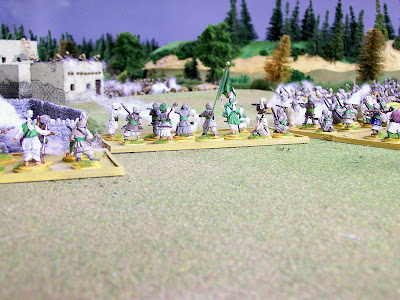 The Tugs are closing in. Rifle fire intensifies. 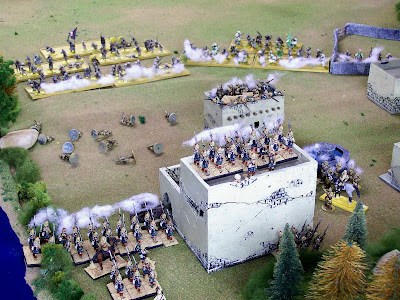 The first Seaforths form close order to the left and atop an adjacent building. FIRE! Forward of them, their mates and the Bombay Miners and Sappers have taken heavy losses to stop the tide coming in. 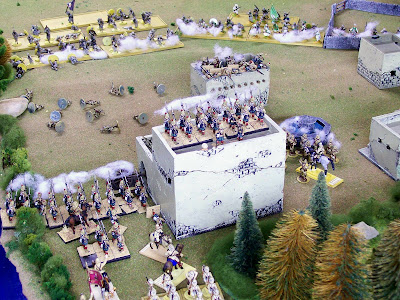 Losses mount on each side. The Berkshires begin to arrive at the bottom center of the photo. Has the tide begun to turn? 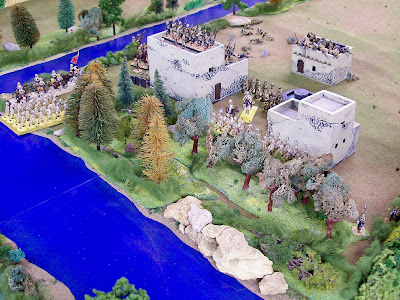 The Imperial fighting line and the Berkshires returning to the village. 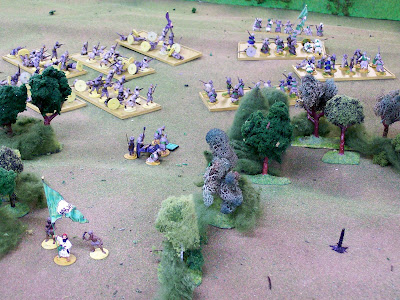 Suddenly the foe departs. They realize there is no way to win. Casualties are taken with them. 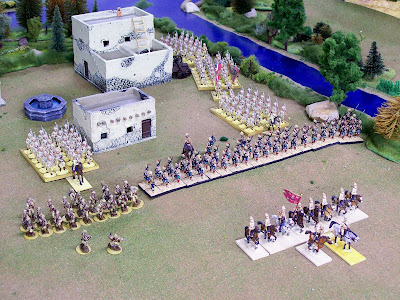 Some moments later the Imperials form outside Kotar. 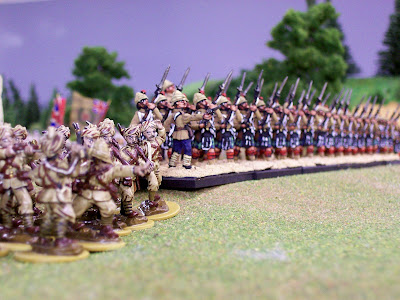 Victors of The Battle of Kotar left to right: The Bombay Miners and Sappers and the Seaforth Highland Battalion. 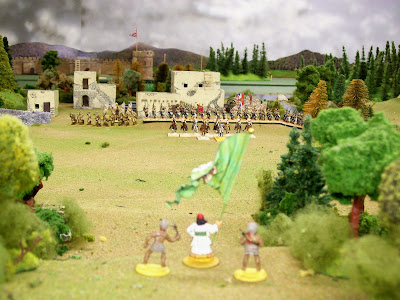 Chota and The General salute them.

Labels: 14: They Were Serious

A good storyline and photos (as always). Good-looking troops too.

Always love a bit of action. I've been watching your blog for a while, and I like your photos. Love the terrain though.

I'm sure we haven't seen the last of those dastardly Tugs!
Love the new banner image too.
Thanks
Donogh

I agree with the others. Excellent report, minis, terrain and pics!

I noticed you listed three NM Frontier movies I love. I would add a 4th - Laurel and Hardy's "Bonnie Scotland". It's a comedy, but also pays homage to some of the classics like Gunga Din and Bengal Lancer. (I might be a bit prejudiced - the forces of Saxe-Urquhart are led by a certain Col. McLaurel...)

I love the terrain and figures! It's nice to see the 10th Hussars (the "Chainy Tenth") getting an outing, as an uncle of mine served with the regiment. Thanks for sharing the AAR.

Thank You Gentlemen,
---
I was actually very anxious for the Imperials and worried what I would tell Der Alte Fritz if his on-loan Seaforths got Isandlwana'ed! Imperial firepower in the beginning was anything but powerful. Abysmal dice throws by the Bombay Miners/Sappers and the
one company of Seaforths were on the very low end; 2D6 = 3s and 4s. Ouch! Shocking actually.
---
Plus the Tugs massed fire into the thin defense/defence took out a lot of the lads in the beginning.
---
After this, Gen. Pettygree arrived on the scene, ordered everyone into close order so the close order rapid fire bonus could be utilized. That helped a great
deal. Good ol' Pettygree for that! He knew the rules.
---
Then the rest of the Seaforths came forward and the scales tipped in favor of HM soldiers. I breathed easier only at that moment.
---
It was a close run thing.
---
A bit of an anti-climax too as correspondent Mike B. wrote to me elsewhere. No argument there. As he infers, the indigenous foes might want to try something besides a frontal attack. That has not worked so far. In their defense though, each prior time, it seemed only one turn separated them from a stunning victory.
---
Colonial games should be close run things though. I was also very glad the elephant battery had crossed the river already. A stampede would have made for a very bad day and a very different story-ending.
---
Thank you Sirs,
Bill

This site has inspired me to start my own blog, but I fear it will pale in comparison to the Campaigns of General Pettygree. There is some great stuff here and in astounding numbers as well! Soldier on!

Your site is very important for me.

I can dream with your beautiful work.