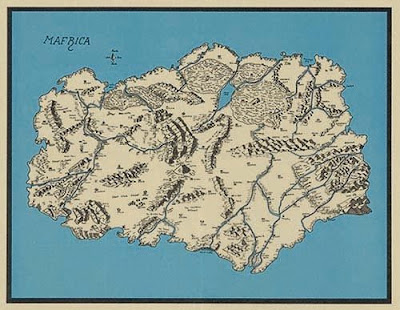 Adapted from Jack Scruby's original by HistoriFigs.
Copies available here: Website = http://historifigs.com
Permission for use on this blog kindly granted by HistoriFigs. 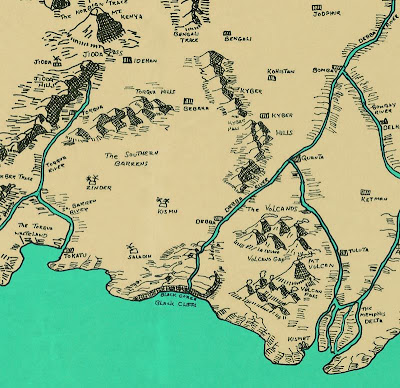 South-central Mafrica.
--Southwest: Tokatu, Britannia's main base and access point into Mafrica.
--Southeast: Kismet, too vulnerable due to vulcanism to use as a main base.
--Center: Khyber [or Kyber] Pass. 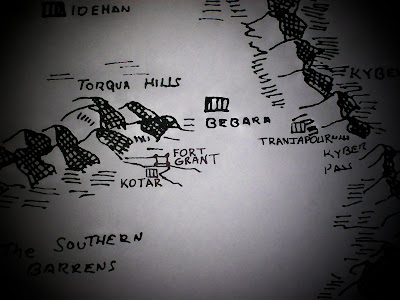 08 September 1898/2008: Battle of Japura Singh at the western exit of The Khyber Pass. Location not named on the map. Exact location: under the letter E in Kyber Pass. (Chapter 2)

Late August 1899/2009 Circumstances:
-- KHAN's Host at Bebara
-- The General and Chota fought at Kotar and are en-route to Bebara.
-- All Imperial forces at Fort Grant.
-- See Chapters 12-16
----------
Closing Remarks:
1. Click on images to enlarge them.
2. Continental Map coloration is actual.
3. My computer changed coloration for The Regional Map.
4. The Tactical Map started as a black and white photocopy at 200% enlargement. Kotar, Fort Grant, the stream there and Tranjapour were hand-drawn by yours truly. The circular special effect came from my Kodak "EasyShare" program.
5. Maps will continue to be used as the story unfolds.
6. Elsewhere on Mafrica: French Foreign Legion Post, the hideaway of El Krobar and more. The latter are under development in the imaginations of regional friends raising Imperial and indigenous forces as did Jack Scruby some four decades ago.
7. YOU can do this too.
----------
Posted by Gallia at 7:40 PM

This is great - really love seeing campaigns of this sort. The map looks great - very authentic.

"out of stock, please email before ordering"

Of course he might not have updated that webpage . . . but that's what it says.

Thank you Furt and Jeff!
---
Jeff, I understand the maps will be reprinted for a convention HistoriFigs will be attending in October 2009.
---
Cheerio,
Bill

Lovely, as usual ...
Of course, for me, half the fun is creating my own map, but having a commercial one is probably a better idea for a guy who can occasionally count on a live opponent!
:)
Arthur
PS: the password for this post is "catize" ... which is, unfortunately, an excellent description for what happens half way through some of my games!
LOL

Thanks for sharing the maps. As a map person, it really makes the campaign come alive for me. i look forward to each addition of your blog.