Date: 14 September 1899/2009
Location: Bebara.
Situation: Crisis Of The Battle
By The By: See Chapters 22-23, for earlier viewing, if needed.
Images Fill Screens If "Clicked"

Viewers will recall the cunning Guru launched a surprise attack against the weak Imperial right flank. And now...let us return there from the native perspective. 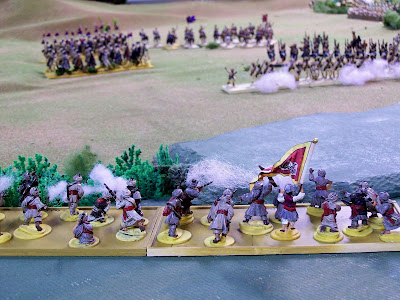 Left to Right: Red Sash Rifles fire at the 1st Sikhs screening the Seaforth Highlanders. The Seaforths spent the turn forming an L-shaped line to maximize firepower in the next turn. That is, if the Seaforths are able to remove disorder from clambering over obstacles without restoring order and racing here for the last few turns to shore up the Imperial right flank! 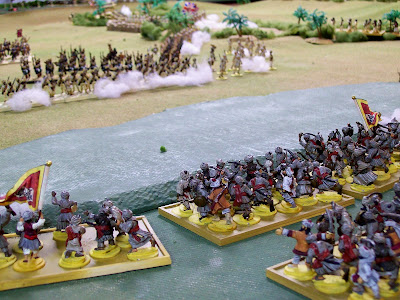 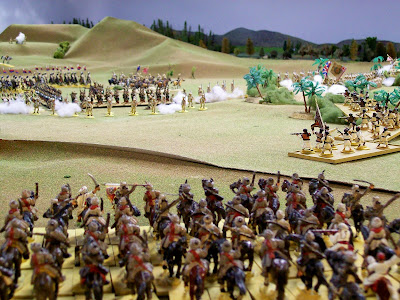 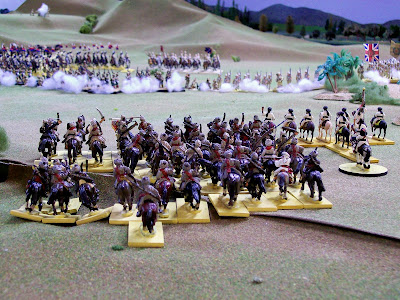 Right To Left: Red Sash Horsemen increase speed from a walk to a canter. The Imperials realize a massive charge is coming in! A diminished body of Household Horsemen add their numbers too but they have suffered grievous 2/3 losses. 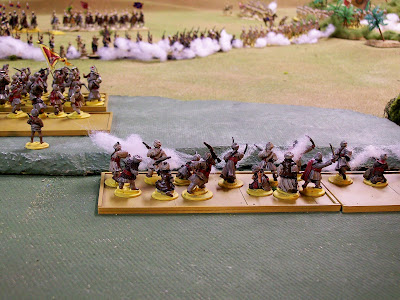 Right to Left: Another body of Red Sash Rifles fire on the Imperials whilst the Red Sash Swordsmen creep closer for a charge next turn. 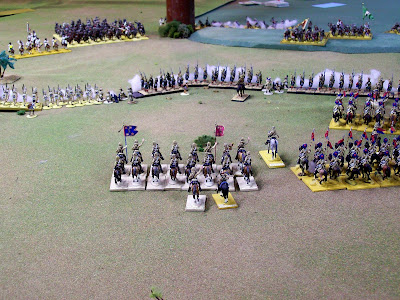 View from the Imperial side. 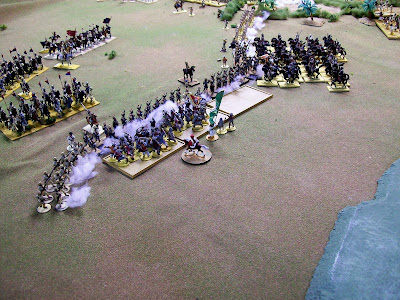 THE CHARGE IS NOT STOPPED. Red Sash Swordsmen and Cavalry breached the hail of rapid fire volleys and mountain gun salvos to melee the Seaforths. It is now up to each Highlander and his mates to beat back the furious charge with muscle and a bayonet. It is the crisis of the battle! Will the line hold or break?
----------
CLOSING REMARKS
1. Return soon for the conclusion.
2. Sorry to keep you in suspense, but that is the nature of a serialized presentation like this.
3. Comments welcome just below - here.
----------
Posted by Gallia at 9:41 PM

Dang Imperial cavalry - not worth a shilling. Their retreat is a disgrace. The Seaforths will stop the native cavalry cold. They've done it before.

Looks grim but the Seaforths will hold and I'm sure that if any of those heathens break through the line then the lancers will mop them up.

I've always painted up the Gordon Highlanders . . . and I'm sure that THEY would turn back those charging natives.

As for the Seaforths, we will just have to hope and wait.

I hope you are enjoying the battle as much as those of us who are viewing at a distance. The Seaforths must hold.

I'm sure the Seaforths will uphold the honor of the Highlands, but the Hussars and Bengal lancers will probably get their swords and lances washed before it is all over.

Jim, who has the Argyll & Sutherland Highlanders for his colonial army